By far the most important market for Germany is the United States, both by inbound and outbound M&A deals.

Germany ranked
7th
out of 147 countries

According to the M&A Attractiveness Index, developed by the M&A Research Centre at Cass Business School, Germany is now ranked seventh out of a total of 147 countries in terms of its attractiveness for M&A purposes (i.e., its ability to attract and sustain business activity).

Germany has made year-on-year improvements since 2012, achieving a position of seventh in 2014, but not back to its highest ranking of fourth in 2010.  From 2011 – 2012 there was a material fall in its position in the Index.

Having said that, Germany has been consistently in the top 20 countries since the Index began and is considered the enginehouse of Europe and a safe haven for investments.

Germany is very strong in the infrastructure and asset factors

The 2012 fall in rankings can be tracked back to economic and financial measures, particularly GDP size and growth and inflation. These factors have improved since 2012, hence the improvement in the overall rankings.

Germany is very strong in the infrastructure and asset factors, which have remained consistently high at 94 percent. In addition, the increased number of both Internet users and high tech exports has improved its scores in technological ratings 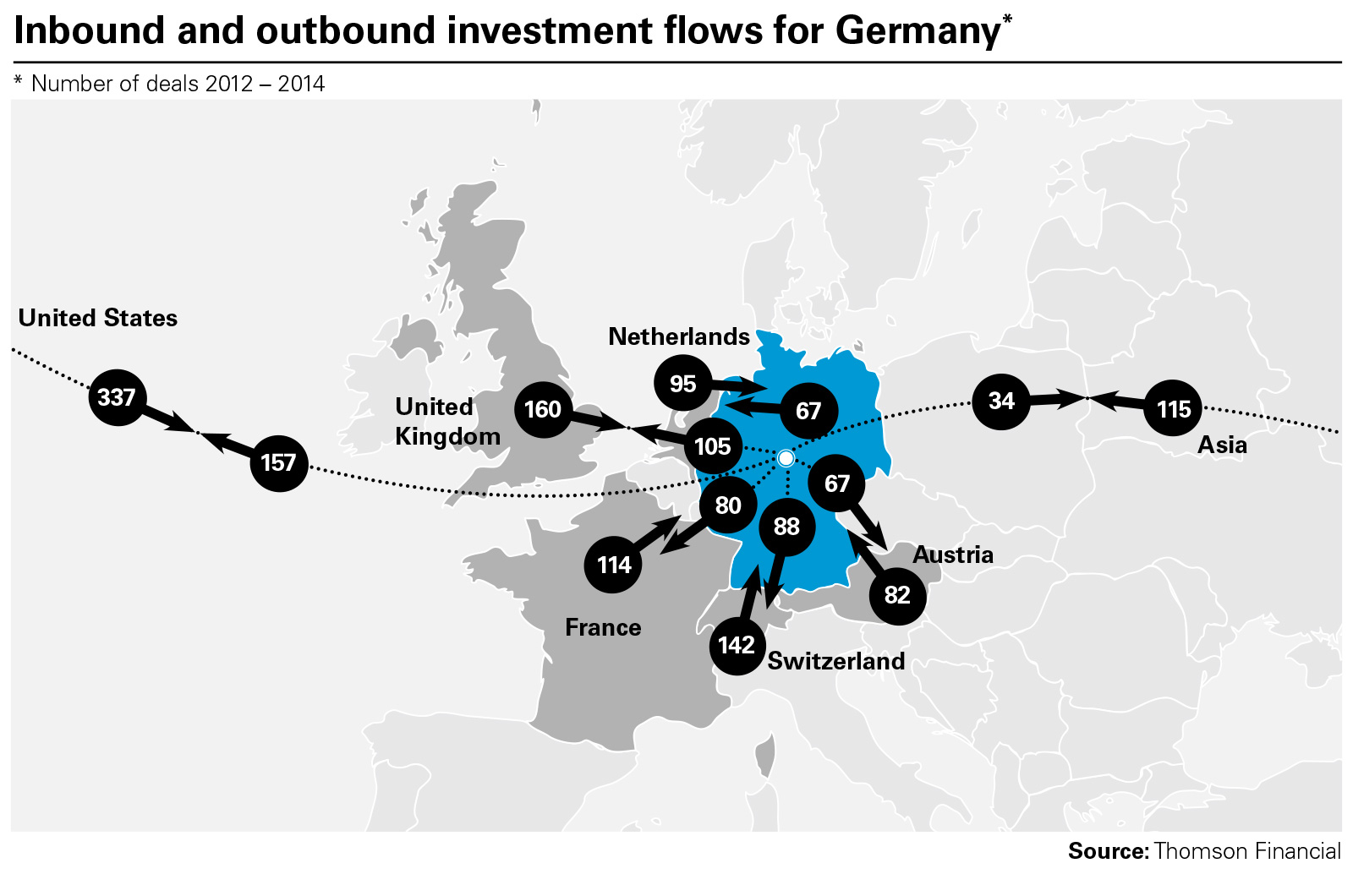 By far the most important market for Germany is the United States, both by inbound and outbound M&A deals. The next three important markets are the United Kingdom, Switzerland and France. For inbound deals, foreign investors are interested in German companies within the software, building and construction, industrials, chemicals and machinery sectors. German companies, on the other hand, are buying up chemicals, software, machinery and alternative energy sources abroad.

Germany's role as a nexus for global M&A is being supported, in line with its neighbours, by depressed oil prices, cheap debt and generally improving fundamentals. The country is a hub for technology—the sector is third by volume of deals in the last five years—and the energetic pace of in-country tech growth is boosting targets and acquirers. Also keeping things buoyant is a healthy flow of foreign and domestic private equity buyouts and inbound interest from China that has grown for the fifth year in a row.

The mutually positive commercial relationship between Germany and the United States is in evidence as prodigious ticket sizes. Germany's ZF Group acquired an American automotive systems supplier for US$11.7 billion, and Merck bought US life sciences concern Sigma-Aldrich for US$17 billion.

There is more coming from the United States than simply M&A interest: An American style of shareholder activism is becoming more prevalent in Germany. This phenomenon frequently sees managers placing more short-term urgency on questions of value and may therefore force an emphasis on corporate takeovers and divestments.  A more clear and present incentive for rationalizing business units is coming from low oil and the rise of renewables.

Reviewing the most active sectors in the last five years we see growth in industrials, consumer products/services and high technology, areas where Germany's highly educated workforce and intellectual property give it an edge. Representative of both the health of M&A and Germany's particular strengths are pharmaceuticals:  After paying US$14 billion for Merck's consumer health division, Bayer announced it would spin off its plastics business. And there are more big ticket deals to come. 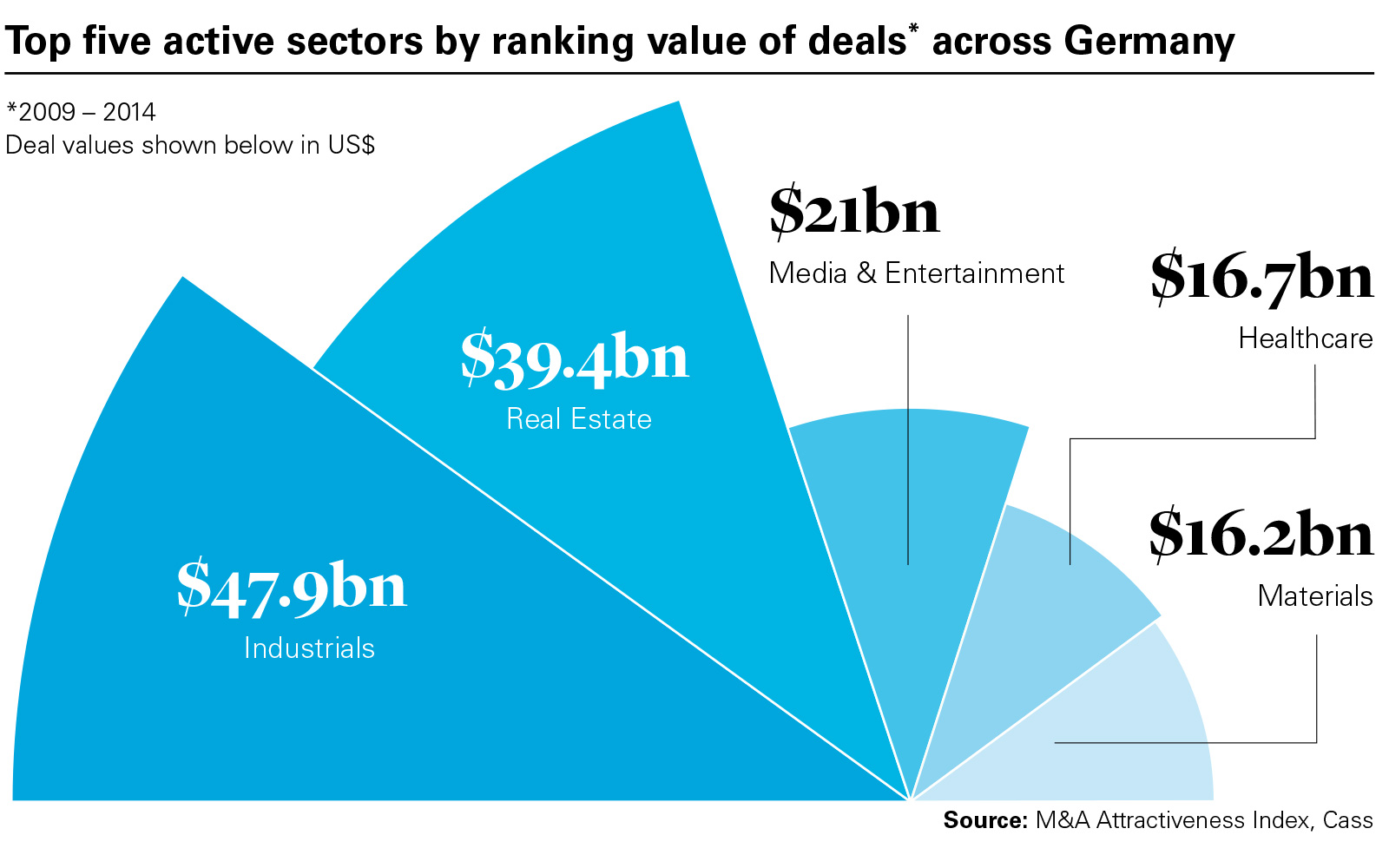