The most important European countries for deals coming into Poland are Cyprus, the United Kingdom and Germany.

Poland ranked
33rd
out of 147 countries

According to the M&A Attractiveness Index, developed by the M&A Research Centre at Cass Business School, Poland is now ranked 33rd out of a total of 147 countries in terms of its attractiveness for M&A purposes (i.e., its ability to attract and sustain business activity).

Poland has achieved its best ranking so far

Poland scores particularly badly in the regulatory and political factors, which is impacting heavily on its position in the Index. Although there has been steady improvement in these factors, it is being held back by the number of days to enforce contracts (currently 685 days), which is still very high compared to other countries.

Improvement in regulatory and political, as well as economic and financial, factors contributed to the improvement of 11 places in 2014. Further market opportunities are within the socioeconomic factors, in which Poland's population size and demographics are both at high levels. 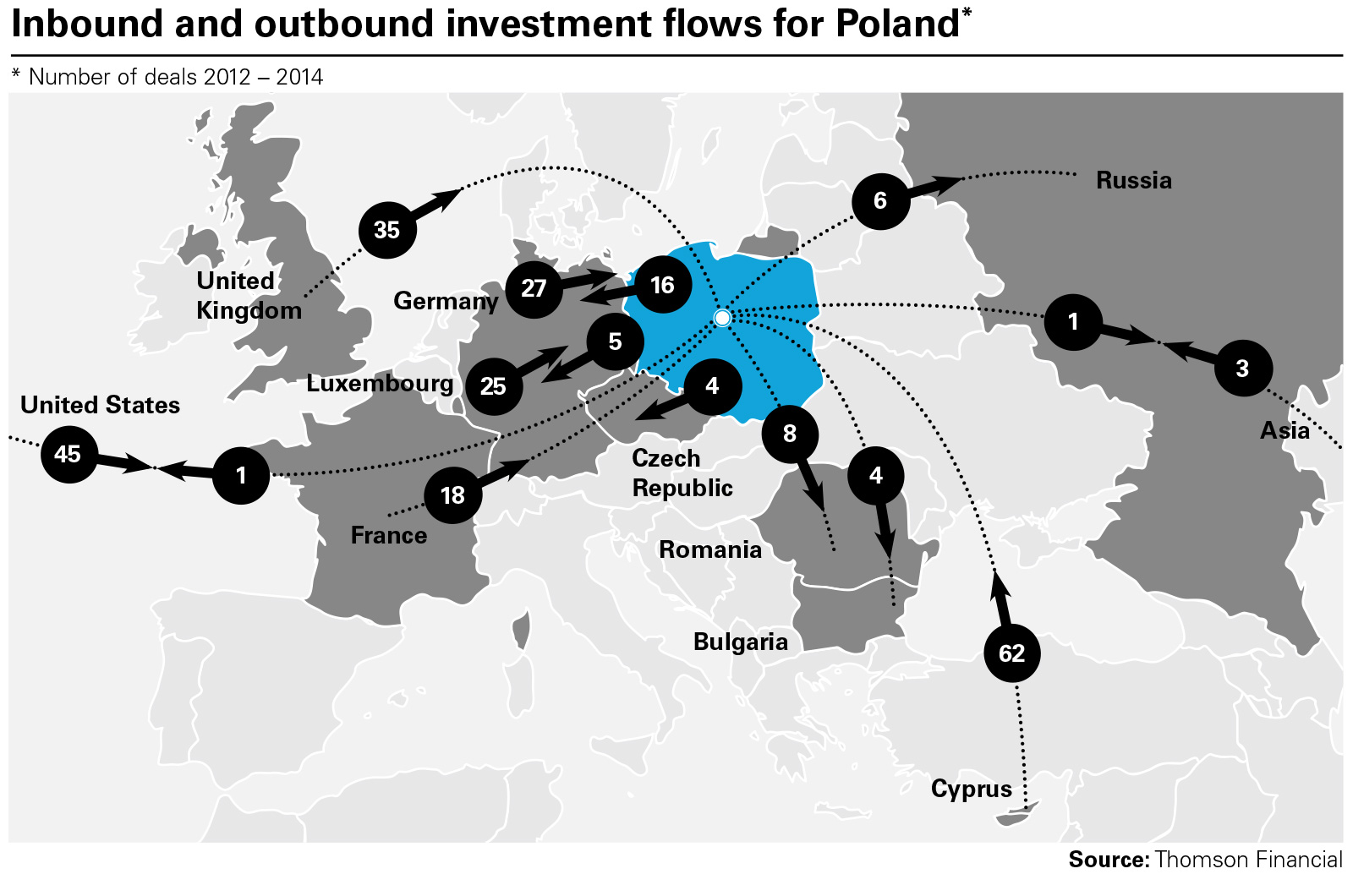 The most important European countries for deals coming into Poland are Cyprus, the United Kingdom and Germany. The United States is also an important market, second only to Cyprus.  In terms of outbound countries to Polish companies, there is virtually no flow back to Cyprus or the United States, indicating that some companies may be using Cyprus as a tax haven, similar to Russian data. Outbound from Poland, Germany and Romania are the top destinations. In terms of Asia, Poland has very little interaction on inbound or outbound M&A deals.

Poland experienced a substantial improvement in its Index ranking, though the study's authors note challenges with contract enforcement. While we don't deny the attractiveness upswing per se, total transactions in 2014 were down about 10 percent by number and 25 percent by value.

The Russian embargo on Polish fruit and vegetables was introduced ostensibly for reasons of hygiene the day after the West imposed its first wave of sanctions in response to the crisis in Ukraine. It hit the food and beverage space hard. Poland exports more food to Russia than anywhere else; so related M&A activity was barely there. Two sector-beating real estate transactions served to offset the absence in food: Together the deals, involving an office building and a shopping mall, accounted for nearly three-quarters of a billion US dollars.

Though it does not appear in our diagram of the top five most active sectors, it was IT that outshone the rest last year, supported by increasing Internet penetration and associated growth in ecommerce. Banking, however, the second-most active space for M&A deals in 2014, is represented as the leader in our diagram, with financials constituting the largest sector by deal value over the last six years.

Poland's Ministry of Treasury reports that among Central and Southeastern European countries, Turkey and the Czech Republic vie with Poland for the top spots by number of deals and headline value, and inbound transactions outstrip outbound by a factor of two in the country.  In other words, there are half as many M&A deals originating from Poland and targeting foreign firms (which constitute about one-sixth of the deal flow) as there are deals launched by the United States, France, Greece, Germany, Sweden and others at Polish targets. The remainder are domestic.

Despite the ongoing embargo, the stage feels set for optimism about Polish M&A in 2015. 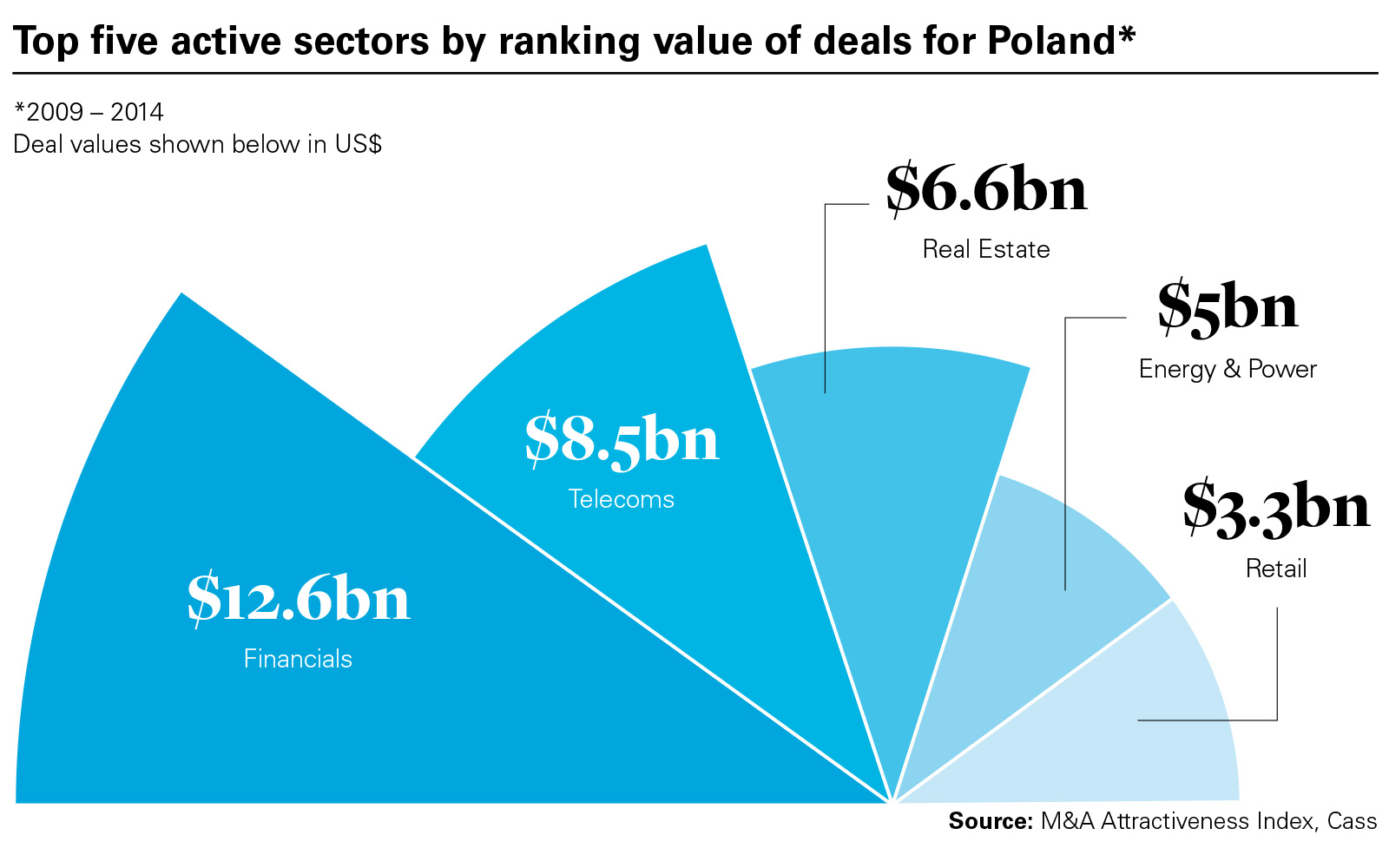