One of the most important deal markets for Russia is Cyprus, which is mostly due to Cyprus' tax haven status

According to the M&A Attractiveness Index, developed by the M&A Research Centre at Cass Business School, Russia is now ranked 57th out of a total of 147 countries in terms of its attractiveness for M&A purposes (i.e., its ability to attract and sustain business activity).

Russia has steadily increased its position up the Index over the past six years, to its current position of 57th, apart from 2013 when it momentarily staggered backwards before jumping forward into its best performance in the Index in 2014.

Russia ranked
57th
out of 147 countries

Russia traditionally scored badly in the factors measured in the regulatory and political and economic and financial areas.  These have steadily improved over the years, contributing to its increased ranking.  The fluctuation downwards in 2013 was due to economic and financial measures, specifically low inflation and GDP, which slowed growth.

Russia has steadily increased its position up the Index

The market strengths are the steady socioeconomic factors, in which both population size and demographics are high and stable.  The economic and financial factors recovered in 2014 partly due to an improvement in the availability of domestic credit.  Another opportunity is with the consistently improving technological factors. 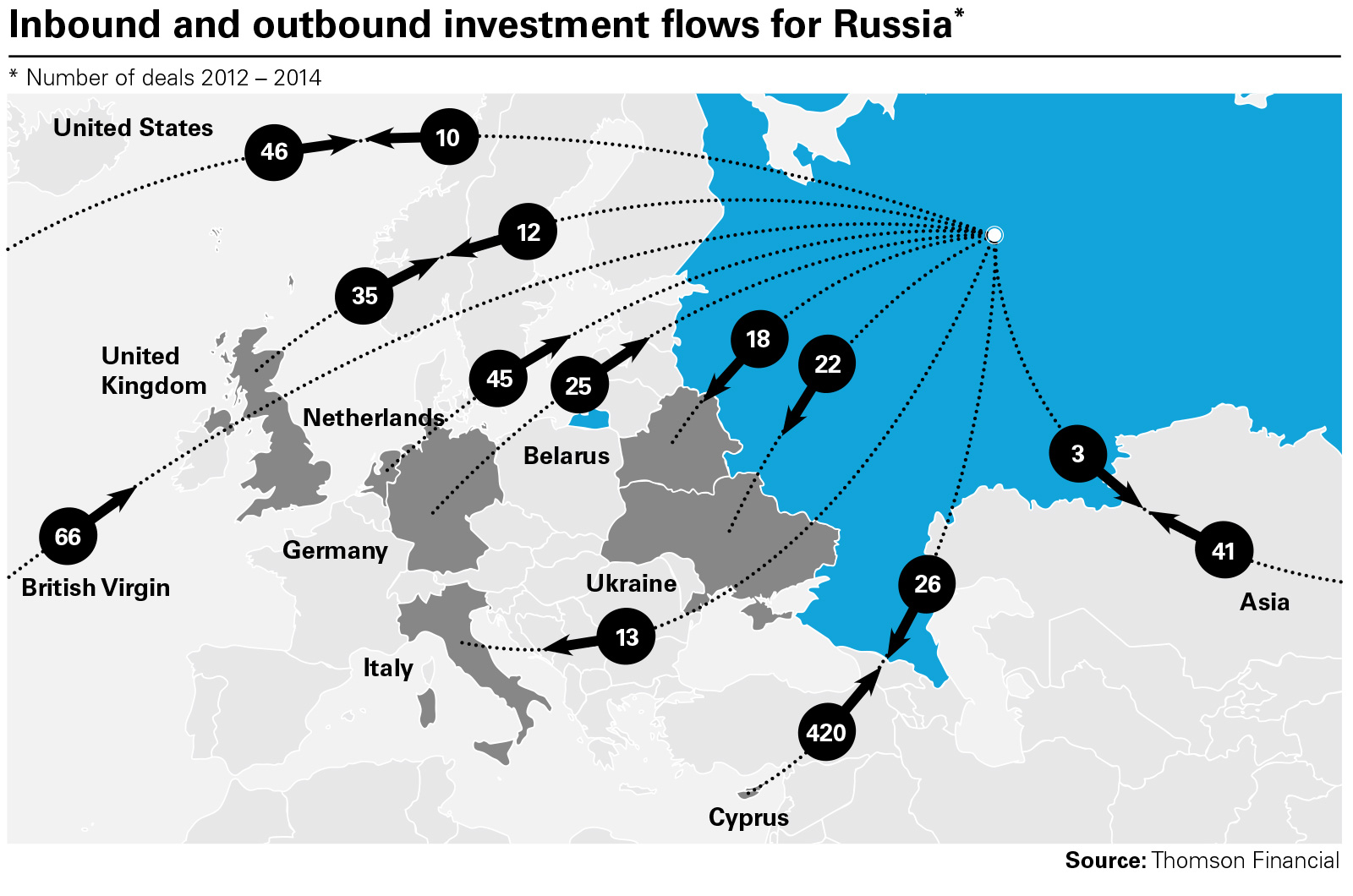 One of the most important deal markets for Russia is Cyprus, which is mostly due to Cyprus' tax haven status and despite the Cypriot government seizing vast amounts of deposits for a banking system bailout in 2013.  Another tax haven, the British Virgin Islands, contributes to the inbound flow, closely followed by the Netherlands and the United Kingdom.

The story that Russia's improving position on the M&A Attractiveness Index doesn't tell, of course, is sanctions.  In response to the crisis in Ukraine, the United States and Europe targeted oil and defense interests and restricted Russian banks' access to Western financial markets.

To be sure, the country is not a straightforward place to do business to start with, and its ranking below our other subject nations is not a surprise.  Perhaps, though, an increase in Russia's attractiveness ranking is at odds with the increased geopolitical instability and the fact that 2014 saw fewer M&A transactions than there had been in half a decade.  Deals of size have been subdued by sanctions directed at the state-owned banks and powerhouses such as Rosneft and Gazprom, and by headwinds in the form of a devaluing rouble, recession and lower oil prices—the latter a phenomenon that hits Russia harder than some.  Less than 10 percent of M&A activity is now inbound or outbound, with the country's increased isolation to blame.  The sanctions are firming up Russia's resolve around its ongoing "deoffshoreification" effort to bring ownership or operations back under domestic control.

Though the M&A landscape has become demonstrably less friendly in the short term, authorities have taken steps to improve things structurally.  Amendments to the law that encompasses strategic investments made it easier to acquire more than 25 percent of a Russian target's main production assets, and the way has been smoothed for foreign investors in Russian shares, which can now be traded through Euroclear and Clearstream.

General in-country weakness is an opportunity, however, as domestic investors can swoop in to real estate, cement or oil-production infrastructure as prices are low. And Russia is looking east as it firms up bilateral agreements with China and the Middle East, which are possessed of a different perspective of Russian risk. 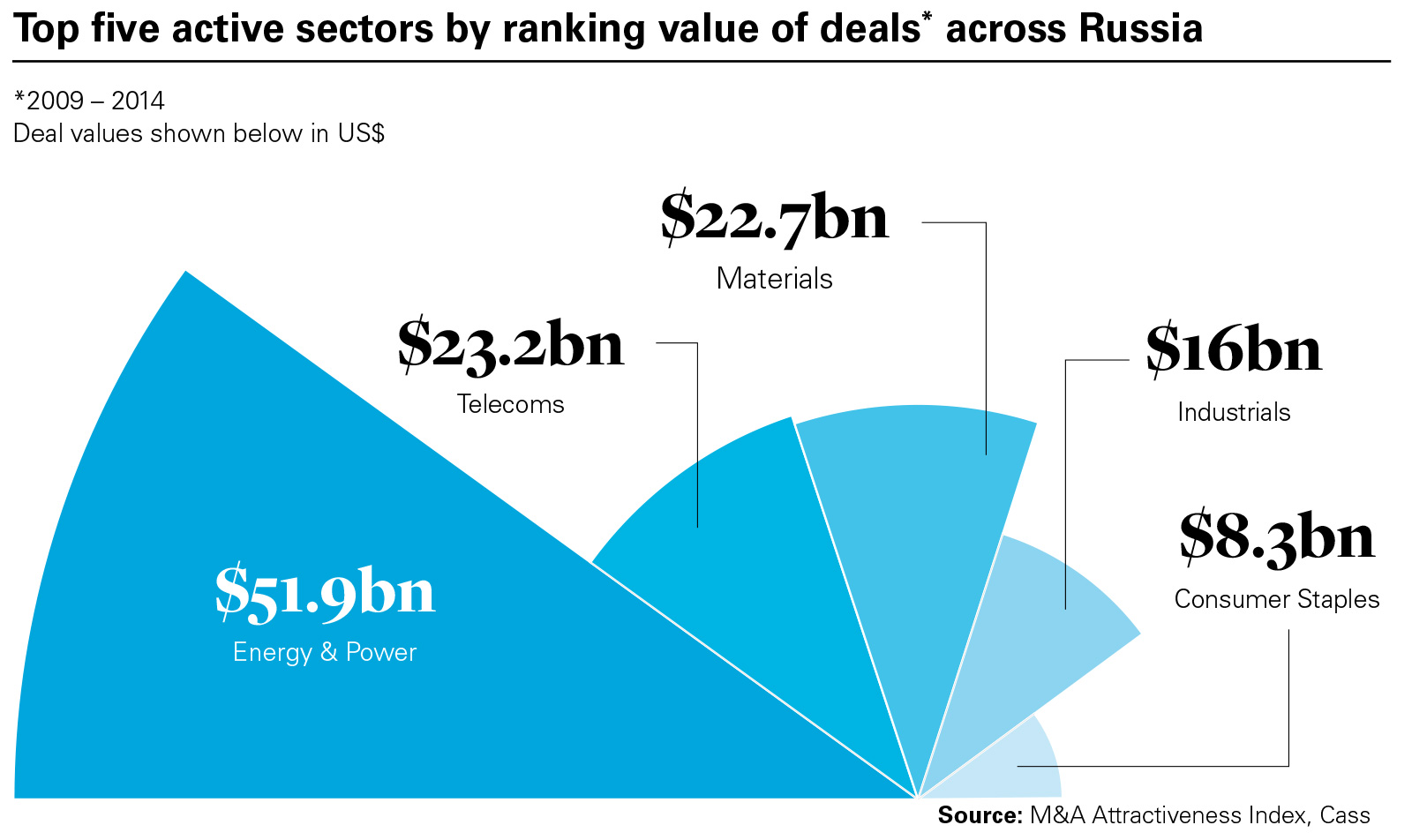