By far the largest inbound deal flow is from the United States to Spain.

According to the M&A Attractiveness Index, developed by the M&A Research Centre at Cass Business School, Spain is now ranked 16th out of a total of 147 countries in terms of its attractiveness for M&A purposes (i.e., its ability to attract and sustain business activity).

Spain has achieved its highest position in the Index in the last six years. During 2010 – 2012 it fell to its lowest position of 26th, but has increased in the last couple of years and jumped a huge seven places between 2012 – 2013.

Spain ranked
16th
out of 147 countries

The regulatory and political factors have been the challenges for Spain. There has been a marked improvement in these factors, which have contributed to its improvement in the Index rankings.  However, there is still room for improvement in terms of enforcing contracts and completing formalities. 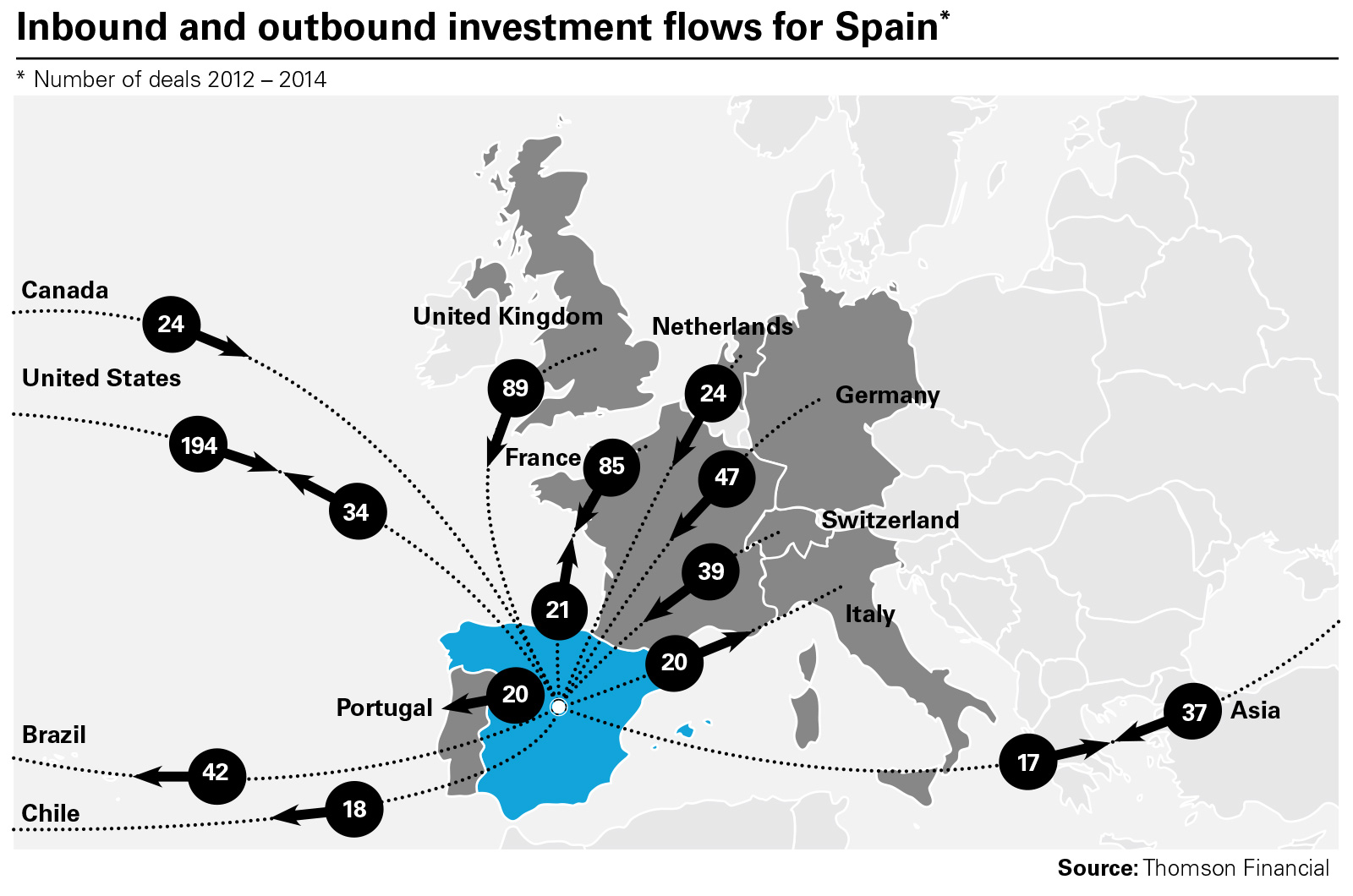 By far the largest inbound deal flow is from the United States to Spain. This market represents double the amount of deals (194 deals) than the next two largest, that of the United Kingdom (89 deals) and France (85 deals). In terms of outbound deals from Spain, Brazil is the destination of choice, closely followed by the United States and then France.

The sector focus of the United States to Spain deal flow is primarily around financial services, where credit institutions, software companies and banks make up 25 percent of the deals done. For its near neighbour France, French companies are buying up transportation and infrastructure companies, whereas Spanish companies are buying French machinery and construction companies.

Spain's healthy rise on the M&A Attractiveness Index is mirrored in last year's activity. Industrials & chemicals stayed strong into 2015 as the most-targeted industry in the first quarter, with announced deal value over US$2 billion steadily approaching last year's grand total already. Spain was applauded by the head of the European Stability Mechanism for using less than half the funds earmarked for its recovery, and for exiting the programme after only a year.

Indeed, the country's emergence from largely real estate–led woes has preceded the present M&A boom in that sector: There were 22 transactions in 2014, a 400 percent increase from previous years, and 2015 is looking robust.

As are outbound deals, the headline energy transaction was Iberdrola's acquisition of US-based UIL Holdings for US$4.1 billion. In financial services, Banco de Sabadell purchased Britain's TSB Banking Group for US$2.7 billion. Meanwhile, several buyout firms have been shedding assets, which means, of course, more targets in the private equity space.

So there is positive activity, and some of it is of size. In line with its own economic turnaround, and along with its neighbours, Spain is seeing dealmaking supported by the continent's loose monetary policy and by sustained interest from Asia.

We do not discount the challenges to a smooth M&A path, however. The Iberdrola and Banco de Sabadell purchases could be seen through the prism of willing dealmakers apportioning risk outside the country. Ongoing uncertainty from the appearance of two new political parties on an otherwise long-established political landscape undermines the sort of stability that gives companies the confidence to pull the trigger. Still, it's easy to vote for someone, anyone else, when unemployment is near 24 percent.

It hasn't hurt IPOs, though. Spain is leading Europe this year by amounts raised in new offerings. 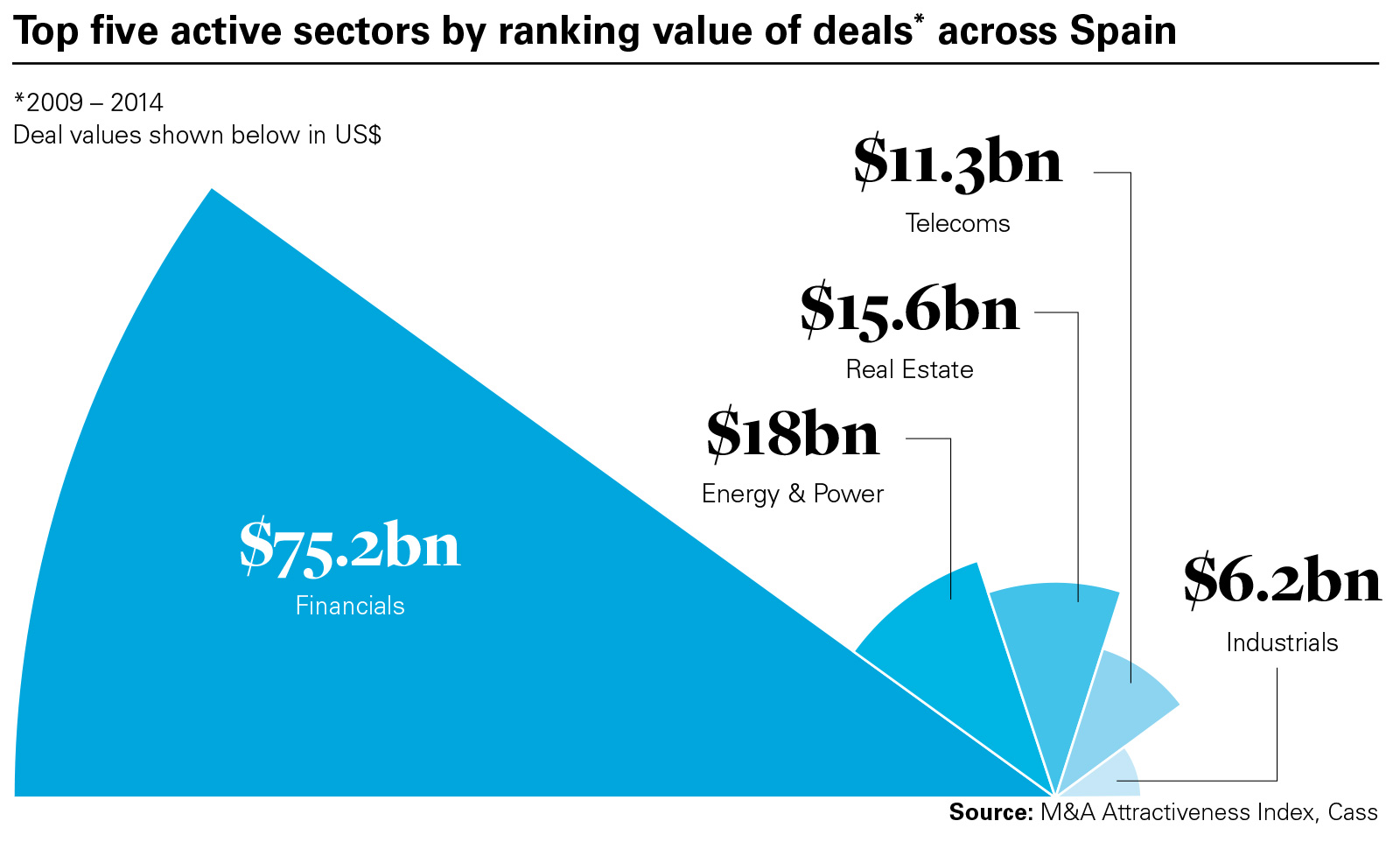