Mining & Metals: Opportunity & Risk – Weathering the bottom of the cycle

Fundamental changes are sweeping through the mining and metals sector. New pressures mean that in order to weather the bottom of the cycle, companies and investors must have the correct strategy in place.

Even the global resources giants have been forced to look inwardly and restructure more than just their business strategies in order to cope with the pressures of the prolonged downturn in commodity prices, as Rebecca Campbell, Christian Pilkington, John Tivey and Anthony Elghossain of global law firm White & Case explain.

From boom to bust, the mining and metals markets have been wending their way. In early 2013, the coal price tanked. Since then, after a decade-long boom in the price of commodities, the drop in prices has extended beyond thermal and coking coal into gold, nickel, iron ore and other commodities.

And there is seemingly no end in sight.

The sector is in the midst of a general realignment. In the last two years, three global mining companies have replaced their chief executives. Total write-downs have soared towards the US$100 million mark, and balance sheets have come under review across the board. New buzzwords have emerged – or, perhaps, reemerged – in the industry: For example, "productivity" and "shareholder returns" have replaced "project development" and "growth" of late.

“People came to the inconvenient truth that the sector had to face operational and balance sheet restructuring...as the unsustainable boom of the ‘commodities super-cycle years’ ran out of steam.”

Underpinning all of these changes is a simple and well-documented reason: "The super-cycle of metals and commodities ended," explains Carlos Urquiaga, head of Structured Debt, Mining & Metals, Americas, BNP Paribas. "There was the price correction starting in late 2011 and a downtrend since then. Valuations collapsed for junior miners, and liquidity started to disappear for them – and for the mid-producers and big integrated companies also, general liquidity became a big issue as a result of lower prices, high cost structures, too much leverage and big capex plans. Capex plans and exploration budgets were the 'casualties,' as a lot of projects that had looked attractive during the upswing were not as attractive anymore and were shelved."

Take gold as a prime example.

"We saw projects that were using US$1,300 gold and US$1,400 in their long-term pricing assumption," says Urquiaga. Since its dramatic decline in the first half of 2013, gold has been trading closer to US$1,200 than US$1,300. "People got a little exuberant," he adds, suggesting some projects were being built for the top of, and not to withstand, the entire cycle.

As low prices plateau, conservatism rises. Many market participants are adopting assumptions nearer those of Randgold, a perennial London gold favourite shielded from decline by a cautious, long-term approach.

But Randgold's one-time peer Petropavlovsk is confronting different circumstances. Amid ongoing negotiations with bondholders on nearly US$924 million of debt due in 2015, Petropavlovsk continues to produce more than 600,000 ounces of gold per year. At current gold prices, though, Petropavlovsk's production will not enable it to repay or refinance near-term bond maturities in full.

With an eye on tomorrow, the Russian gold giant has announced a tentative plan for an exchange offer for certain bondholders, who are being asked to extend the maturity dates of their bonds to 2019 in return for an increase in the coupon from 4 per cent to 7.5 percent and some cash to be raised through a proposed rights issue. The equity market's response to the latter was a markdown in the company's valuation to just £70 million – the latest share price drop in a prolonged slide that has seen it lose around 95 per cent of its value over the past four years.

These trends have echoed across the mining and metals sector over the past two years or so.

The US coal sector has seen a spate of mine closures and bankruptcies, with a glut of supply making, or meeting, a slump in prices. Pressure from environmental lobbies has also been a factor. Among the casualties have been Patriot Coal, America West, Trinity Coal and Frasure Creek Mining.

More casualties may come: Peabody is now saddled by US$6 billion of debt following an Australian acquisition a few years ago and has lost a combined US$1.1 billion over the past two years.

And it's not just US players. European coal miners are suffering as well.

Consider the story of New World Resources (NWR) and its chief legal officer, Boudewijn Wentink. Although he joined the company in March 2013, believing – with the market – that coal prices were set to rise again, Wentink soon had a major financial restructuring on his hands.

"It was fairly obvious that this wouldn't go well for us if we didn't take action," he recalls.

"We had to renegotiate two sets of bank covenants almost immediately upon my joining. And not much later it dawned on me that we needed to take more drastic steps. We had €825 million in debt on the balance sheet at that time – along with €70 million per annum in related costs."

With a clearly unsustainable situation, how can a company get its bondholders to take a pragmatic line without causing panic or tipping into bankruptcy?

"You have to eat humble pie," says NWR's Wentink, who believes this pragmatic attitude, combined with a keen desire on the part of the bondholders to find a creative solution, was the key to eventually successful negotiations. 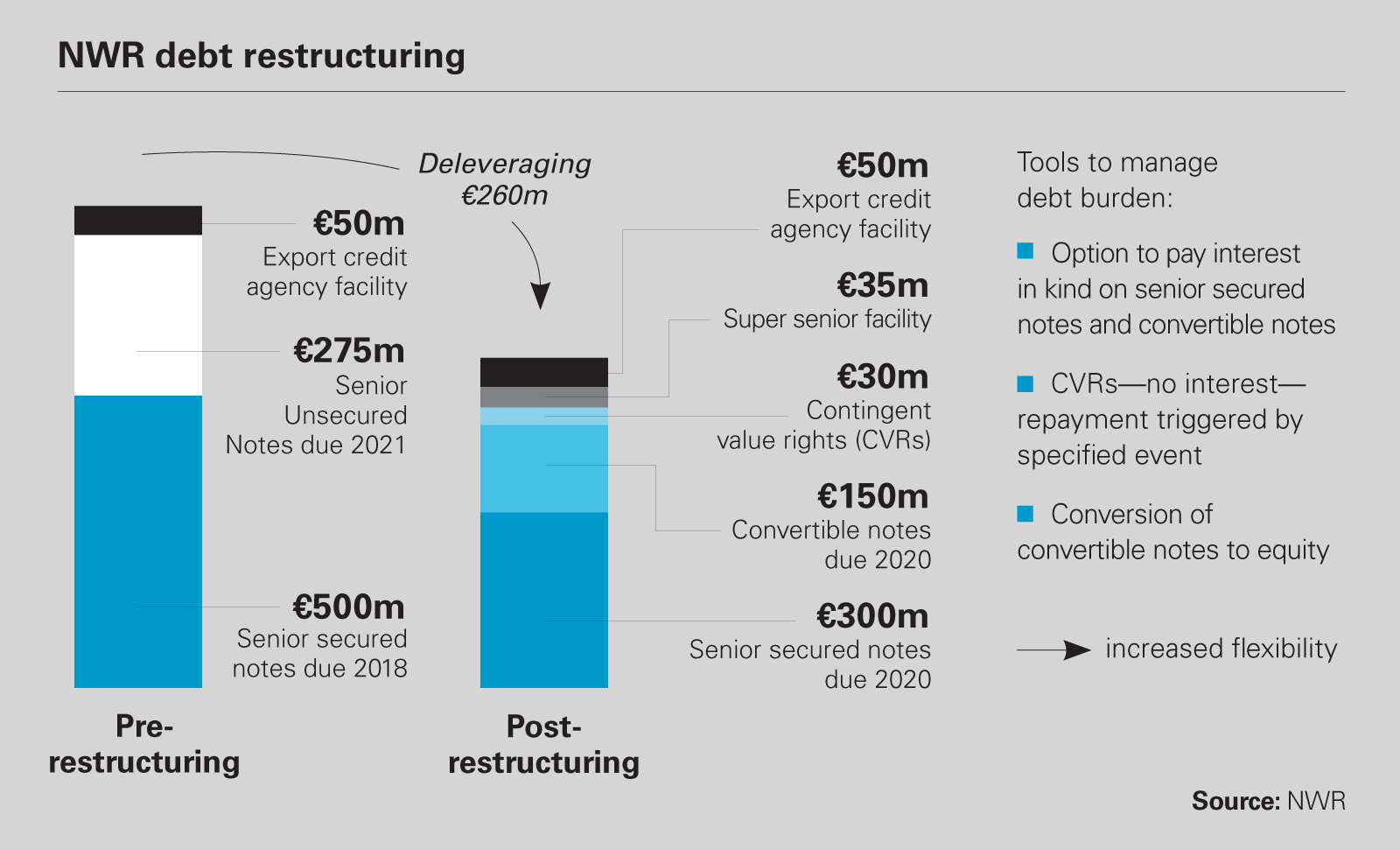 Alongside an operating transformation, a company must consider its financial transformation, too. Indeed, NWR's process included a major asset sale and an independent business review undertaken by PwC, which shared management's view. "In time," he says, "people came to see the inconvenient truth: We had to go through a balance sheet restructuring." Ultimately, the bondholders conceded the possibility of a haircut on the condition a sensible future plan was drawn up.

But the deal was not yet done. Failure by any key stakeholder to agree to this restructuring deal would have resulted in a more onerous and value-destructive administration process, which would leave unsecured bondholders and shareholders with near-zero recoveries. On the other hand, however, a deal involving all stakeholders was a stake in a viable business that was able to weather the bottom of the cycle and reposition for a prospective coal price recovery – if and when it eventuates.

"We developed – with the bondholders, of course – a business case that factored in a moderate coal price increase compared to where we are today," continues Wentink. "The picture changed by the hour before the final deal was struck."

35%
decline in the value of gold since the peak in 2011
Source: Infomine

Today, NWR is emerging as one of the most complex restructurings executed in the mining and metals sector after the bondholders agreed not only to convert their debt into equity, but also (together with NWR's existing majority shareholder) to inject €185 million of new money into the company.

64
US coal mines idled in the first half of 2014
Source: SNL Energy

"The bondholders look at the company as a locked box," says Wentink. "There will be no cash leakage and extreme cost control until the coal price picks up."

This pattern is evident right across the industry, according to Urquiaga. "US rates being at historical lows has allowed a lot of the funds to turn to the mining sector."

"It's riskier, but provides the yields that they are looking for. And these days, commercial banks are very liquid. After the financial crisis, the banks were protecting liquidity. They focused on cleaning up and selling assets. As a result, today there's plenty of liquidity in the banks at all levels for long-term and for short-term lending. But banks today are highly selective and disciplined, and they will be looking for high-quality ssets and management teams. Banks want healthy balance sheets with good assets."

That creates a mixed picture for miners. Second-rate projects are unlikely to fly. Conversely, with a little bit of creative thinking, a project such as Hudbay Minerals' Constancia copper mine in Peru can still get off the ground. Hudbay is just a few short months from putting Constancia into production, after a US$1.7 billion build that began in 2012. Standing behind that capital expenditure bill is a combination of bank debt, senior notes, streaming deals, equity finance and cash.

Mining companies with underperforming commodities in their portfolios are under significant pressure at the current phase in the cycle. Even so, many are making the tough decisions and adjustments required to survive. In so doing, they may break into the next boom. 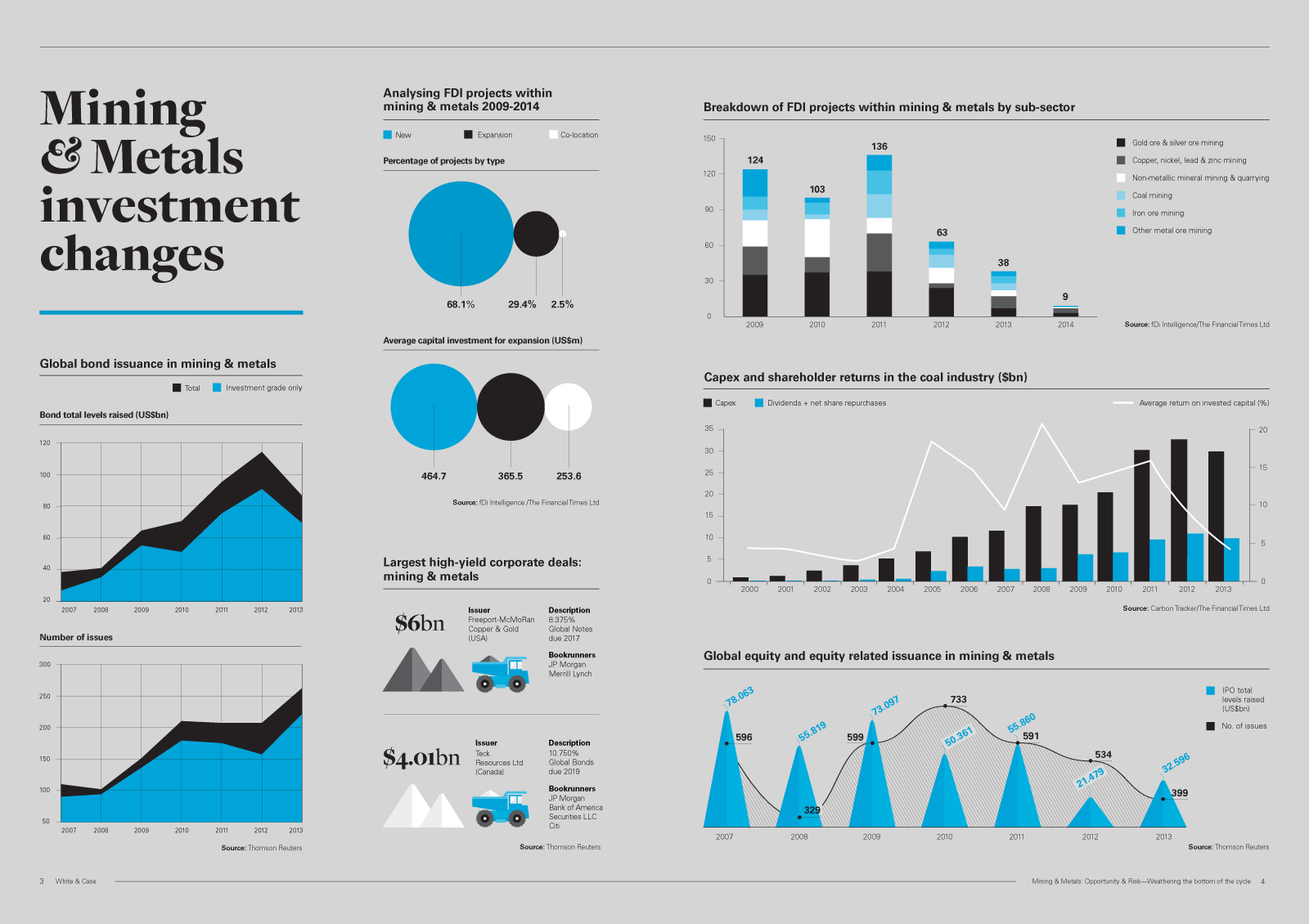