Private equity firms: In the line of antitrust fire?

There was a time when private equity firms may have seen themselves as arms-length financial investors but regulators are increasingly holding them responsible for the behaviour of their portfolio companies.

A new type of cartel fine emerged in 2014. For the first time ever in Europe, a group of investors were fined more than €30 million (US$32 million) for the behaviour of their portfolio companies, indicating a new and serious risk—that of private equity parental liability.

Private equity firms are not "traditional" parent companies, but they can be held responsible for the actions of their portfolio companies if regulators believe that they exercise decisive influence or control over the portfolio company. According to the Commission's decision, Goldman Sachs controlled Prysmian for almost two years, appointed board members who influenced strategic decisions and was regularly updated on Prysmian business.

Over the past 25 years, Commission cartel fines have risen significantly, amounting to approximately €23 billion in total. These ever-growing fines are now being extended to PE firms charged with parental liability for the actions of their portfolio companies. The Commission may impose fines of up to ten percent of the worldwide turnover of the entire PE group for the actions of one portfolio company. Further, the Commission can increase a fine by 100% for each prior infringement of any entity in the portfolio, with no time limit. 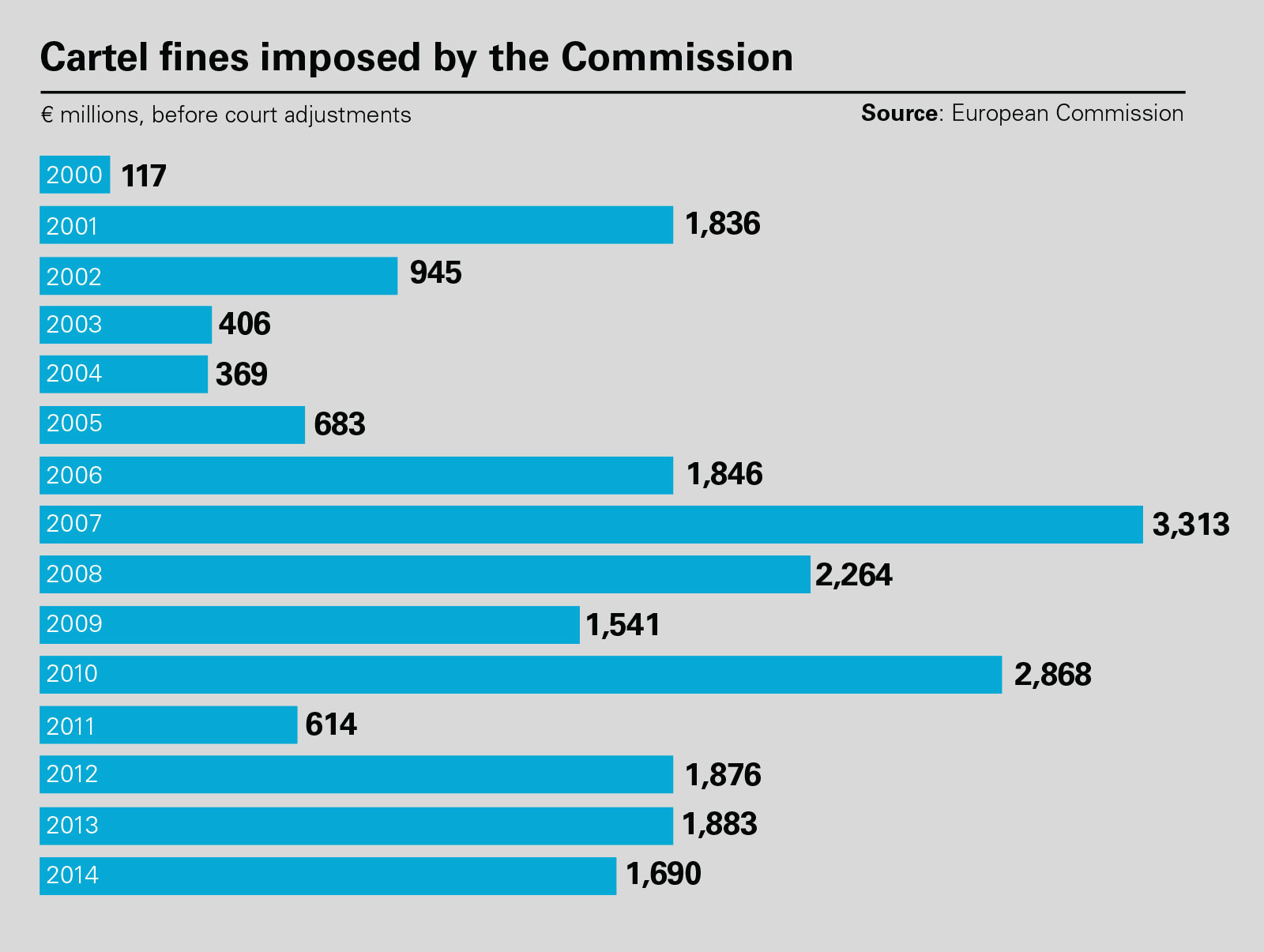 These groundbreaking cases should act as a warning to private equity firms to add an extra layer of due diligence when contemplating an acquisition or once the transaction has closed.

In the light of these fines, private equity firms should develop a proper understanding of what constitutes control and an awareness of the liability associated with acquiring portfolio companies.

Beware of acquiring control: You are liable when you least expect it

Most PE firms probably do not think that they acquire control from an antitrust perspective, in particular when they purchase a minority shareholding. PE firms will often say that they are simply "financial investors" as they do not get involved in the daily management and as a consequence, they should not be held liable for their portfolio companies' wrongdoings. Of course, PE firms are not per se parent companies in the traditional sense of the term, but the same criteria that show a parent company has decisive influence are applicable to PE firms.

There is not a strict list of criteria based on which decisive influence is established. In fact, multiple factors come into play when a regulatory authority judges whether a traditional parent company or a private equity firm has control, such as veto rights over strategic decisions (budget, business plan, senior management etc.), its shareholding, its ability to influence the board of directors, whether it has an absolute majority at shareholding meetings or if it has representatives on a portfolio company's supervisory board.

Even when a portfolio company is not owned fully by the PE firm, risks still exist. For example, in 2011, the EC judged that Fuji Electric exercised influence over Japan AE Power Systems Corporation, even though it held only 30 percent of the shares.

In the Dutch flour cartel, one of the private equity firms, CVC, only held 40 percent of the shares and yet was still considered to exercise decisive influence. The ACM reached that conclusion because the 40 percent shareholding gave CVC a veto right over important strategic decisions, such as the adoption of the business plan and the appointment of Meneba's Board. Moreover, the CVC group had a representative on Meneba's Supervisory Board who simultaneously held a position at another CVC wholly owned portfolio company.

Mitigate your risk: Do your homework

A. Engage in thorough due diligence before an acquisition

Fear of assuming responsibility for the illicit behaviour of a purchased portfolio company is understandable, but the risk can be mitigated. Proper due diligence can reduce the risk that a PE firm be tied to the preacquisition behaviour of its portfolio company and be held responsible for activities in which it played no part. It is also essential in identifying risky conduct and patterns that could give rise to antitrust scrutiny in the future. Antitrust is not systematically covered by due diligence. Although the intensity of the review could vary based on the industry and parties at stake, some level of diligence should be conducted through document review and targeted questions, covering the following areas:

(i) Horizontal behaviour, such as price-fixing, market sharing and customer allocation, bid-rigging, and exchanging sensitive information. such infringements not only signal high fines but also, in some jurisdictions, prison. When investing in industries which have a history of antitrust condemnations (or display high concentration and some closeness between competitors), a firm may wish to pay special attention to antitrust issues during the due diligence and in preparing the deal documents.

(ii) Vertical behaviour, which occurs between the portfolio company and its distributors, clients and suppliers. Activities which should raise serious concern during due diligence include: resale price maintenance, restriction on active and passive sales outside the exclusive territory, and banning Internet sales. These actions could invalidate the entire agreement and result in high fines. Other types of conduct, such as a longer exclusivity agreement, should also be reviewed carefully as it could lead to the invalidation of the clause or the agreement, as well as fines.

(iii) Abuse of dominance, which includes the unilateral conduct of companies that are dominant on a particular market. The acquisition of a dominant company should lead the acquirer to pay special attention to issues such as exclusivity, rebate and pricing practices.

The discovery of any of these issues during the due diligence should lead to a reconsideration of the purchase price and/or the inclusion of specific provisions in the purchase agreement, or even to rethink the entire transaction if the risks are too high.

The purchase agreement should provide for any ongoing litigation and for conduct discovered during the due diligence and which could give rise to litigation. The purchase agreement should also provide for the event in which the portfolio company is sanctioned for conduct which occurred before closing, but which was only uncovered after closing. For instance, it is typical to hold the seller liable for conduct uncovered within a defined time frame from closing.

Establishing compliance programmes is one way private equity firms can tackle the risk of inappropriate behaviour among its portfolio companies, particularly where the due diligence process has showed inappropriate conduct or simply risky patterns. The compliance programme can range from a simple guidebook and live training sessions to in-depth document review and interviews with key personnel—but whatever form it takes, it's vital for private equity firms to put them in place to mitigate their exposure.