On 18 May 2022, the EU General Court (GC) upheld the European Commission's (EC) € 28 million fine imposed on Canon for gun-jumping in the context of a (somewhat unique) so-called warehousing structure. The judgment confirms that structures such as the one at issue are not allowed under EU law without an express derogation from the EC.

In 2016, Canon Inc. acquired TMSC. The acquisition was carried out through a holding (or a warehousing) structure in two steps:

Also in March 2016, an anonymous complainant approached the EC and by July 2016, the EC informed Canon that it was conducting an investigation for possible violations of the standstill obligation and the notification requirement. In July 2017, the EC issued the statement of objections and in June 2019, the EC adopted a final decision imposing two fines to Canon for failing to notify a concentration and for implementing a concentration before its clearance.1 The EC considered, first, that the Interim Transaction and the Ultimate Transaction constituted a single concentration; second, that the Interim Transaction was a necessary step to achieve a change of control; and third, that Canon partially implemented the concentration by carrying out the Interim Transaction. It thus fined Canon EUR 28 million for a breach of the standstill obligation and for failure to notify the transaction before its implementation, in violation of Articles 7(1) and 4(1) of the EU Merger Regulation. Competition authorities in the US, China and Japan reached similar conclusions.

In the EU, this case follows the EY judgment of the Court of Justice,2 in which the Court ruled that the standstill obligation is breached where the parties implement operations contributing to a lasting change in the control of the target undertaking. In EY, the Court ruled that the implementation of steps which are not necessary to achieve a change of control of an undertaking concerned by that concentration do not breach the standstill obligation. On that basis, the Court found that the termination of a cooperation agreement, which was a condition precedent to the merger, did not constitute partial implementation given that it had no direct functional link with the change of control.

The GC rejected that argument and, in line with EY, confirmed that the implementation of a concentration is not limited to the acquisition of control, but can also cover any operations which contribute to a lasting change of control of the target.

Thus, the key question in the case was not whether there was an acquisition of control of TMSC prior to the clearance by the EC, but whether the Interim Transaction contributed, in whole or in part, in fact or in law, to the change of control of that undertaking before that date.

This case marks another victory for the EC which has seen all its recent gun jumping decisions and steep fines imposed in them upheld by the GC, including Altice4 and Marine Harvest5. More generally, the case follows the recent trend of increased enforcement against gun-jumping, as the below statistics show. 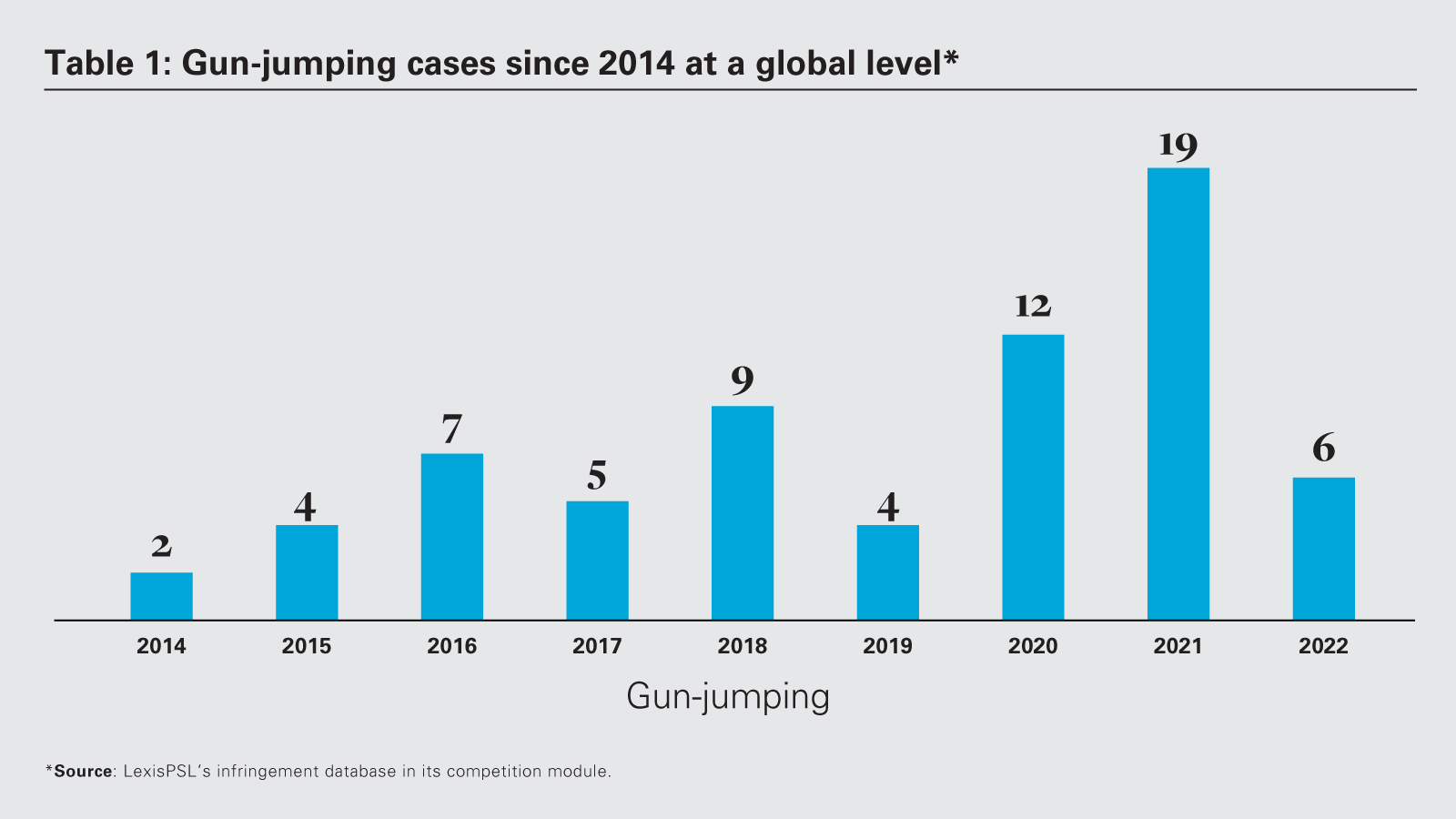 More fundamentally, the case is important because it confirms that the notion of partial implementation can include steps which do not necessarily involve, in themselves, a change of control over the target, and thus do not imply the premature exercise of control prior to receiving EU clearance.

In this respect, the case is different from other cases such as Altice,6 in which the infringement was based on both the ability of the acquirer to exercise decisive influence over the target (from the SPA interim covenants) and the actual exercise of that influence (due to the pre-closing information exchanges). In Altice, the EC found concrete examples of Altice's interfering in PT Portugal's day-to-day operations prior to the EC clearance.

In the same vein, the recent decision from the French competition authority in COFEPP7 (W&C alert) sanctioned EUR 7 million for the progressive takeover of the target company, through gradually increasing its equity stake over the years leading to a de facto control, prior to clearance.

It is clear from both of these cases that the breach of the standstill obligation was due to the premature exercise of control. This was, in itself, liable to defeat the purpose of the EU Merger Regulation, which is to ensure that the EC can control the effect of a concentration before the change of control takes place.

The current case shows that the prohibition, in the GC's view, extends beyond that, and covers any step or operation contributing to a lasting change of control. Accordingly, certain steps are caught by the prohibition, if they have a "direct functional link" to the implementation of the transaction. This is regardless of whether such steps give the acquirer the possibility to exercise control prematurely. It is clear that Canon did not exercise any control over TMSC prior to obtaining merger control clearance from the EC. At most, it could only have influenced the identity of an alternative acquirer, in case the authorities had opposed the transaction. Treating such a situation in the same manner as a premature exercise of control seems far reaching.

Given the peculiarities of the Interim Transaction in this case, it remains to be seen if the Canon case seals the fate of any warehousing scheme whereby a target is transferred to an interim buyer that has a back-to-back arrangement with the final acquirer. Notably, in this case, the interim buyer was not a fully independent bank or third party, but rather an SPV established by the parties for the purposes of this transaction. In addition, as noted by the GC, in case the EC had not cleared the transaction, Canon was in a position to decide to whom TMSC would be sold instead. That said, the case generally echoes the negative stance taken by the EC about warehousing schemes in the Consolidated Jurisdictional Notice8 ("CJN", §35), namely that the standstill obligation applies also to the warehousing of the target with a third party, which is considered as a single transaction together with the ultimate transaction. Such a strict position is unfortunate, given that a warehousing

structure can in some cases facilitate the execution of a transaction and be structured in such a way as to entirely preclude any premature influence of the buyer on the target and involve an interim buyer which is fully independent from the parties, thus respecting the spirit of the standstill obligation. Interestingly, in Canon v Commission, Canon challenged the legality of paragraph 35 CJN, but the GC rejected the argument as ineffective, given that the EC decision was not based on paragraph 35.

It remains to be seen whether Canon will appeal the case to the ECJ.