On 1 September, the European Commission (EC) issued its Second Annual Report under Article 5(4) of the Foreign Direct Investments (FDI) Screening Regulation along with an EC Staff Working Document (SWD). The Report covers the 2021 period and provides an overview of FDI trends and screening in the EU27, as well as emerging developments in national screening mechanisms.

2021 was a bumper year for both M&A and FDI, with global FDI reaching EUR 1.5 trillion in 2021, outperforming 2020 by 52%. Interestingly, despite the global increase, the EU27 experienced a decrease in terms of value of around 31% compared to 2020, leaving it still lagging behind pre-pandemic values by 68%.

In terms of transaction volume in the EU27, the EC reports that more than 4,000 transactions were undertaken by foreign investors, an increase of 20.5% on 2020 with an obvious skew towards the acquisition of equity stakes in existing EU27 companies, an increase of 32% compared to 2020. Of these, around 26% could be characterised as “intra-EU” with investors using their existing EU subsidiaries to effect their acquisitions. Notably, for UK investors, this was the case in one third of EU27 investments, indicating continuing tight economic links between the UK and the EU. Likewise, for China and Hong Kong, investments via EU subsidiaries reached 38% in 2021.

The US and the UK as top Investors

The US and the UK dominate foreign transactions in the EU27, representing 32.3% and 25.6% of equity acquisitions respectively. The below table represents the EC’s findings on the top FDI investors taking equity stakes above 10% in EU27 companies in 2021. 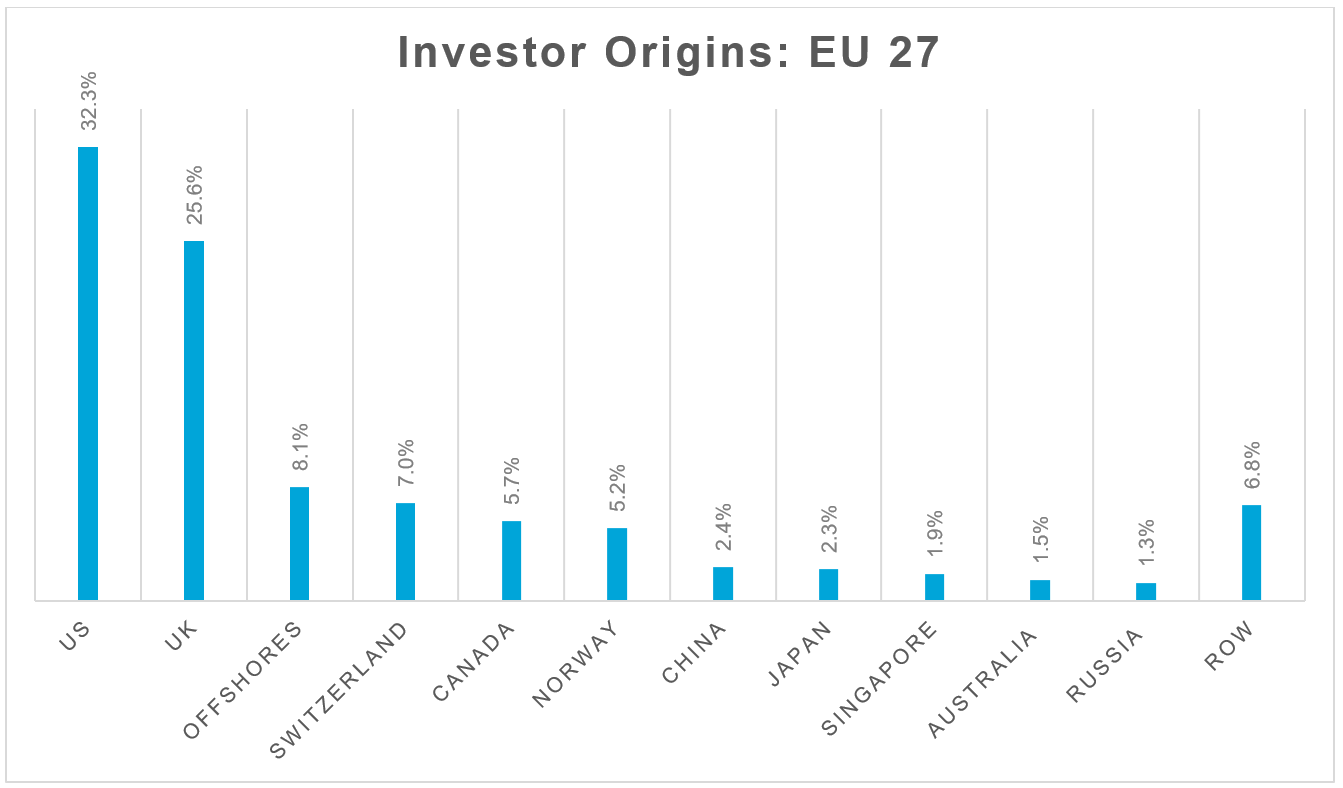 Top FDI Destinations and Sectors in the EU27

Germany remains the top destination for FDI investors in the EU 27, representing 16.4% of all FDI investments, an increase of 20% over its 2020 figures. This was followed by, in descending order, Spain, France, the Netherlands, Italy, Ireland, Denmark, Belgium, Sweden and Finland. In terms of sectoral focus, there is a clear preference in equity investments for Information and Communications technology (ICT) targets with 30% of the total. In the ICT sector, the UK and the US again dominated with 64% of share acquisitions in ICT. In line with the 2021 trend for greater volume versus decreased value in FDI deals in the EU 27, it is interesting to note that the 43.3% of ICT acquisitions in 2021 were in companies characterised as “small”, i.e. companies with 10-49 employees. After ICT, the top sectors were manufacturing (25.9%), professional, scientific and technical services (8%), retail (7.1%) and financial services (6%).

While the EU FDI Screening Regulation does not require that Member States establish a national screening mechanism, the EC has not been shy about encouraging Member States in that direction, issuing an explicit call for Member States to establish national regimes in its 2020 Guidance on the EU FDI Screening Regulation and again in its 2022 Guidance to Member States on FDI from Russia and Belarus. This message is also clear from the EC Report, which states that the EC "expects that all 27 EU Member States will soon have a national FDI screening mechanism in place".1  While the COVID-19 Outbreak was certainly an accelerator, the main rationale for adopting FDI screening for Member States is now a long-term policy objective to protect national security interests. To that end, certain Covid-19 exceptional measures, such as lower threshold for review, have been extended and tended to become permanent.

In 2021, three Member States adopted a new screening mechanism, six Member States expanded existing regimes, and seven initiated consultative or legislative processes to introduce new regimes. An overview of the Commission’s findings in respect of the evolving position of the various Member States’ FDI regimes is set out below. There were no reported legislative developments in Austria, Finland, Malta, Poland, Portugal, Slovenia or Spain, all of which have established FDI screening regimes.

In those Member States that do have FDI screening mechanisms there have been a considerable number of FDI notifications at national level in 2021. One notable feature is that informal review remains prevalent: the Member States reported that of all the cases submitted to their authorities, 71% were deemed not to require formal screening, because, for example, they were deemed to fall outside the scope of the Member State’s screening regime or lack of impact on national security. This is as compared to 20% in the first EC Annual Report for 2020.

Conditional clearances are also on the rise, with Member States reporting that 23% of cases screened were only authorised with conditions or mitigating measures. This is a marked increase over 2020, where this was the case for just 12% of notifications. A further 1% of cases were blocked and 3% withdrawn by the parties. This confirms that for the vast majority of cases, FDI screening is more a matter of administrative scrutiny than a risk for inbound investments in the EU. As the EC points out, EU remains open to FDI and only cases deemed to raise serious threats to national security are exposed to prohibition decisions.6 However investors should anticipate the possibility of conditional clearances in their calibration of risk.

One of the most relevant considerations in making the risk assessment continues to be the investor origin. Germany, for example, has issued or threatened an increasing number of prohibitions on investments originating from China and Russia, and let the long-stop date for a proposed public takeover of a German technology company by an investor from Taiwan expire without clearing the deal. Italy has blocked four deals involving Chinese investors from proceeding. It also unwound a drone-manufacturing deal, three years after the acquisition originally took place, and statements by the Italian government seemed to pre-emptively scuttle a joint venture within the transport sector before it had been finalised.

Likewise, although not covered by the EC Report as an ex-EU regime, the UK has blocked its first two deals under the National Security and Investment Act 2021. Both prohibitions concerned Chinese investors.

The EC reports that 13 Member States submitted 414 notifications under Article 6 of the FDI Screening Regulation, with five Member States (Austria, France, Germany, Italy and Spain) responsible for over 85% of those notifications. Those notifications concern a broad variety of sectors, with ICT again accounting for the lion’s share with 36%. Deal values were equally varied with the lowest deal value notified just EUR 1 and the highest around EUR 29-31 billion. Interestingly, however, the EC Report reveals a clear trend in notification of higher value deals: deals worth less than EUR 10 million accounted for just 14% of notifications, whilst those worth in excess of EUR 500 million, the highest value category in the EC’s Report, accounting for 34% of notifications. The sectoral focus was led by ICT deals, which account for 36% of the total.

In terms of the investor origin, the EC Report sets out the five main countries of origin with the US a leader, followed by the UK, then China. Broadly speaking, these follow the proportions of EU27 investments represented by each jurisdiction. Of the notified transactions, 86% were cleared in Phase 1 with 11% proceeding to Phase 2. Again, Manufacturing and ICT accounted for 76% of all Phase 2 cases with ICT raising drastically from 17% in the first EC report to 32% in the current report.

Unlike 2020, there were no ex officio screenings initiated by the EC by virtue of its powers under Article 7 of the FDI Screening Regulation in 2021.

The EU27 outlook remains very much steered towards increased FDI regulation and enforcement, and investors should expect a corresponding impact on transactions for 2022. EU Screening in particular has been dominated by Member States with well-established FDI screening regimes (Austria, France, Germany, Italy and Spain) but should become more diversified as more Member States join the FDI screening club. In terms of sectoral focus ICT and manufacturing, which encompasses critical infrastructure and defence manufacturing, remain the top sectors for investment, national screening and EU screening. Investors in these sectors will therefore need to consider FDI rules early, and ensure they are appropriately factored into transaction timescales.

Once continued area of concern for investors, however, remains prevalent in the scope of divergence in national schemes, which is only set to continue as more national schemes are adopted. The EC Report flags that in terms of this ever-increasing number of national regimes, Member States continue to show significant degrees of variation in their formal screening processes. Applicable timelines, sectoral coverage, notification requirements and other elements continue to diverge significantly (see our annual report on global FDI available here). However, while the EC can encourage more harmonisation, its role is limited when it comes to FDI regulation as a matter primarily of Member States’ national laws. Ensuring more harmonisation of existing FDI screening regimes and the new regimes emerging will be key to improving visibility for foreign investors.

The First EC report noted that the FDI Screening Regulation is a source of additional administrative burden for FDI screening authorities. The EU cooperation mechanism further increases the workload of national authorities already struggling with the legislative expansion of sectors to be reviewed. This adds complexity and impacts the timelines of review with less visibility for investors.

Narrowing down and systemizing the list of sensitive areas subject to national FDI review as well as providing more guidance and visibility to foreign investors on the substantive review/past precedent and the procedural features of the FDI review process should remain key objectives. This will be a highly critical issue with 27 FDI screening systems in force in the near future. Publishing guidelines, as expected in France by the end of 2022, is a step in the right direction. The second EC Report rightly acknowledges that there is room for improvement in terms of best practices in Member States.

The EC is likely to address those issues in the now overdue study on the FDI cooperation mechanism, expected to have been concluded in the summer 2022, which could result in a proposal to revise the FDI Screening Regulation. Practical steps and alignment measures by Member States would be also welcomed by investors.