The merger unit of the Czech Competition Office (CCO) ranks among the most stable teams at the CCO with accessible and responsive staff, so the more detailed the pre-notification, the faster and smoother the process following official notification will be

Perhaps the most interesting development last year was the application of an upward referral by the Czech Competition Office (CCO) in one case.

This is rare, as the office does not have a history of interfering with merger cases falling within the jurisdiction of the EU. This particular case concerned the acquisition of a distributor for non- original spare parts for light vehicles, heptus 292, by LKQ German Holding. It was part of a broader transaction approved by the European Commission, and it resulted in approval by the CCO, subject  to structural commitments.

The latter was a significant transaction for the Czech insurance market, as Wustenrot is a well- established insurer that as a result gained a new, financially strong owner and potential for growth.

There have been no developments in the merger  clearance  field recently. The merger unit ranks among the most stable teams at the CCO, and the same people have been working there for a number of years.

Staff are accessible and responsive, which makes life significantly easier, particularly during pre-notification—the one part of the process that is always a bit unpredictable in terms of timing and in terms of the depth to which issues will be scrutinized in each case. Clients can be confident that their pre-notification will be quickly addressed by case teams instead of waiting in a long queue.

The quality of review by the CCO is good and officials know and follow the most recent case law of the European Commission and EU courts. The flip side of this is that clients should not expect the office to be ready to take a revolutionary approach to merger law concepts, such as going beyond commission practice in its definition of the relevant markets. The CCO commonly takes a conservative attitude.

The CCO remained open for most of the spring of 2020 as the COVID-19 pandemic erupted, but future delays in the availability and responsiveness of officials cannot be ruled out.

That being said, the filing process should not be affected much thanks  to the introduction of data boxes, which allow documents sent to  public authorities to be filed remotely without physical copies. This system has been functioning for a number of years now and facilitates communication with the office and other courts and authorities, particularly in these exceptional circumstances.

There are certainly some industries in which competition does not function perfectly, and in which a sector inquiry should perhaps be considered, but this is more a matter of cartel enforcement and prevention than a priority in merger cases.

Obviously, there are industries such as agriculture or wholesale bakeries where the CCO has dealt with a number of cases in the past few years and has perhaps more knowledge and expertise than in other industries, for which it will be expected to deal with a merger once in a decade. This may show in the depth of inquiry and market review by the office, but is not necessarily a change in priorities or heightened focus on any sector.

No mergers were blocked in the past year, but there were some Phase II investigations that ultimately led to approved structural commitments. There was a case in the medical sector in which financial group PENTA was approved to take over local hospitals, subject to the commitment to divest pharmacies located within the premises of a hospital.

The competition office can be open-minded in relation to behavioral remedies. Like every other competition regulator, it considers them to be secondary and less preferable to structural remedies, but it is not a non- starter or uncharted territory for them, as is sometimes the case for other national competition authorities across the EU.

Overall, however, 2019/20 was not a notable year for the merger agenda that would highlight any new trends.

No major developments have taken place in this area over the past year. However, the CCO holds regular seminars and conferences every year, and it is always interesting to note what its representatives have to say on these occasions.

There has been some recent media speculation that the Czech Competition Office chair, Petr Rafaj, may step down following negative publicity associated with certain high-profile public procurement cases in which the office was involved.

Changes in administration would have an impact on various departments and units of the office.
Such a change would be surprising, although if new people were to join  the CCO, this might alter its tone and style, and would therefore have an impact on how lawyers represent their merger cases there. 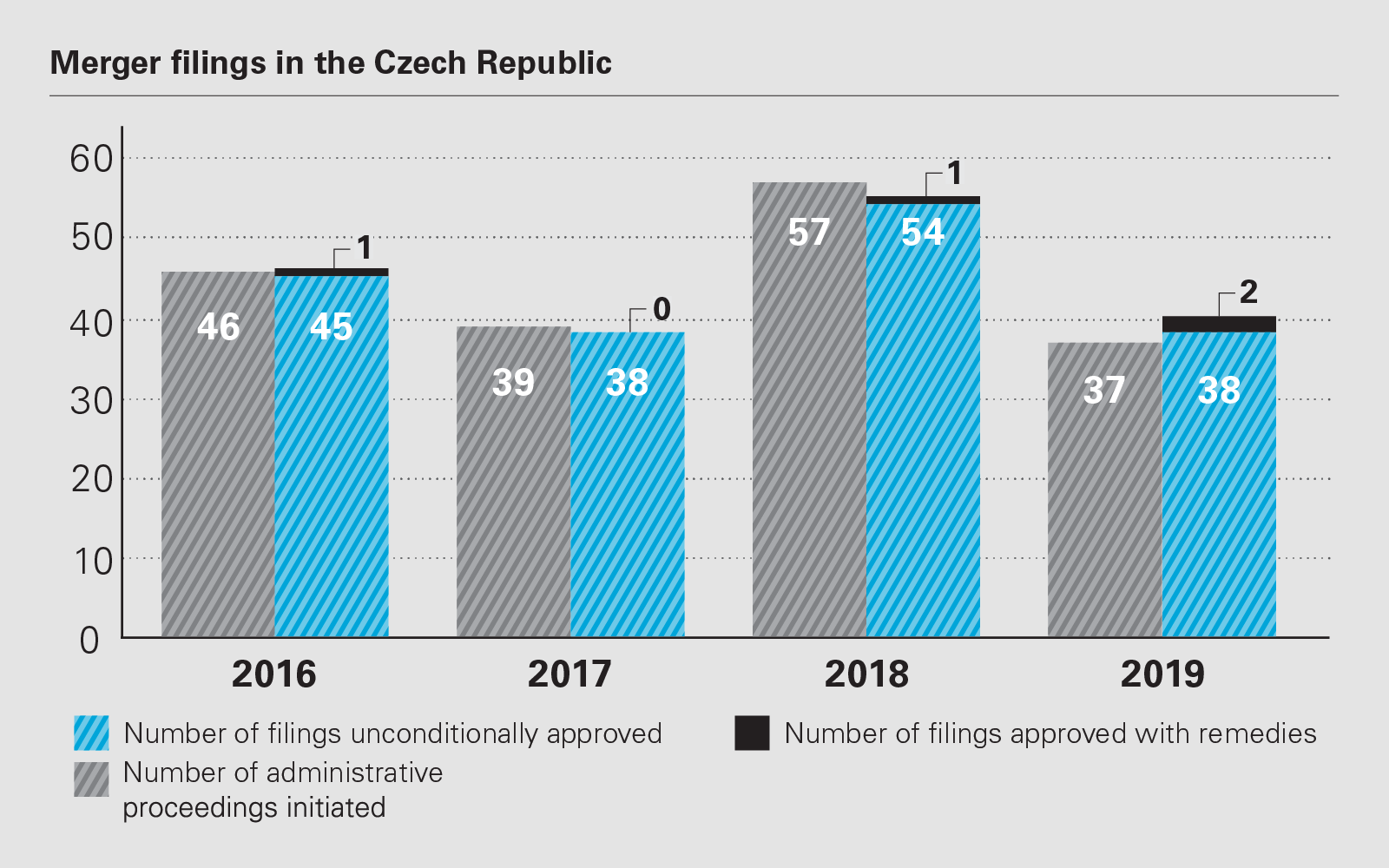 Merger filings in the Czech Republic

One of the key points is to seek good legal advice on regulatory and competition law requirements to which the transaction may be subject worldwide. Merger control duties may often be triggered in non-EU jurisdictions, even if the transaction does not have any immediate effect there. Approvals by other authorities may often be required in heavily regulated industries, such as energy or media.

A detailed pre-notification filing with a thorough analysis of every possible horizontal and vertical angle that may be taken up by third parties and competition authorities during market testing. The more detailed the pre-notification is, the faster and smoother the process following official notification will be.

On the local level, a lack of complicated mergers in concentrated markets that would tackle difficult legal and economic questions or any new ideas or trends in the office's jurisprudence.

We were also (pleasantly) surprised by the EU General Court's annulment of the European Commission's decision to block the Telefonica UK/Hutchison merger.