There are many ways to resolve a construction dispute when it arises—but what are the best methods for mitigating risks, avoiding or resolving such disputes for projects based in Australia, India, Indonesia, Malaysia, the Philippines, Singapore and Vietnam?

The construction sector in Asia-Pacific is set for considerable growth, although that comes with challenges. In any largescale construction project, myriad risks exist to cause disruptions and delays, but there are best practices for mitigating these risks and resolving disputes.

The International construction industry, sensitive though it is to global economic cycles, has proven itself remarkably resilient in the face of the pandemic. In much of the developing world, including countries in the Asia-Pacific region, it also holds the key to economic recovery due to its potential for job creation. Coupled with a drive toward sustainability and digital transformation, the sector is set for considerable growth in the next few years. Some market observers suggest that the construction industry in Asia-Pacific might reach US$312.67 billion by 2024.

Governments across Asia-Pacific are looking to infrastructure to help stimulate growth as the region begins to return to some form of normalcy post-COVID-19. Encouraged by this government focus, investors are turning to view Asia-Pacific as a land of opportunity. But with rapid growth comes challenges. Construction projects around the world rely heavily on long supply chains: equipment, material and labor. A disruption to any link in that chain can result in delay and increased costs, and the way parties approach risk allocation and mitigation can have significant financial implications.

As construction projects around the world were interrupted or suspended against the backdrop of the pandemic, project owners, developers and contractors have started to look at their contractual terms more closely. Force majeure is not the only option for obtaining relief, often other—and more appropriate—avenues exist that merit exploring at an early stage. Savvy market participants will proceed with great caution and will take steps to mitigate risk, avoid disputes and ensure the best possible outcome through settlement or arbitration should disputes arise.

The construction industry in Indonesia has long been considered the backbone of the country's economic and social development, and regulations are being continuously amended to ease complexity and expedite processes for businesses and foreign investors. 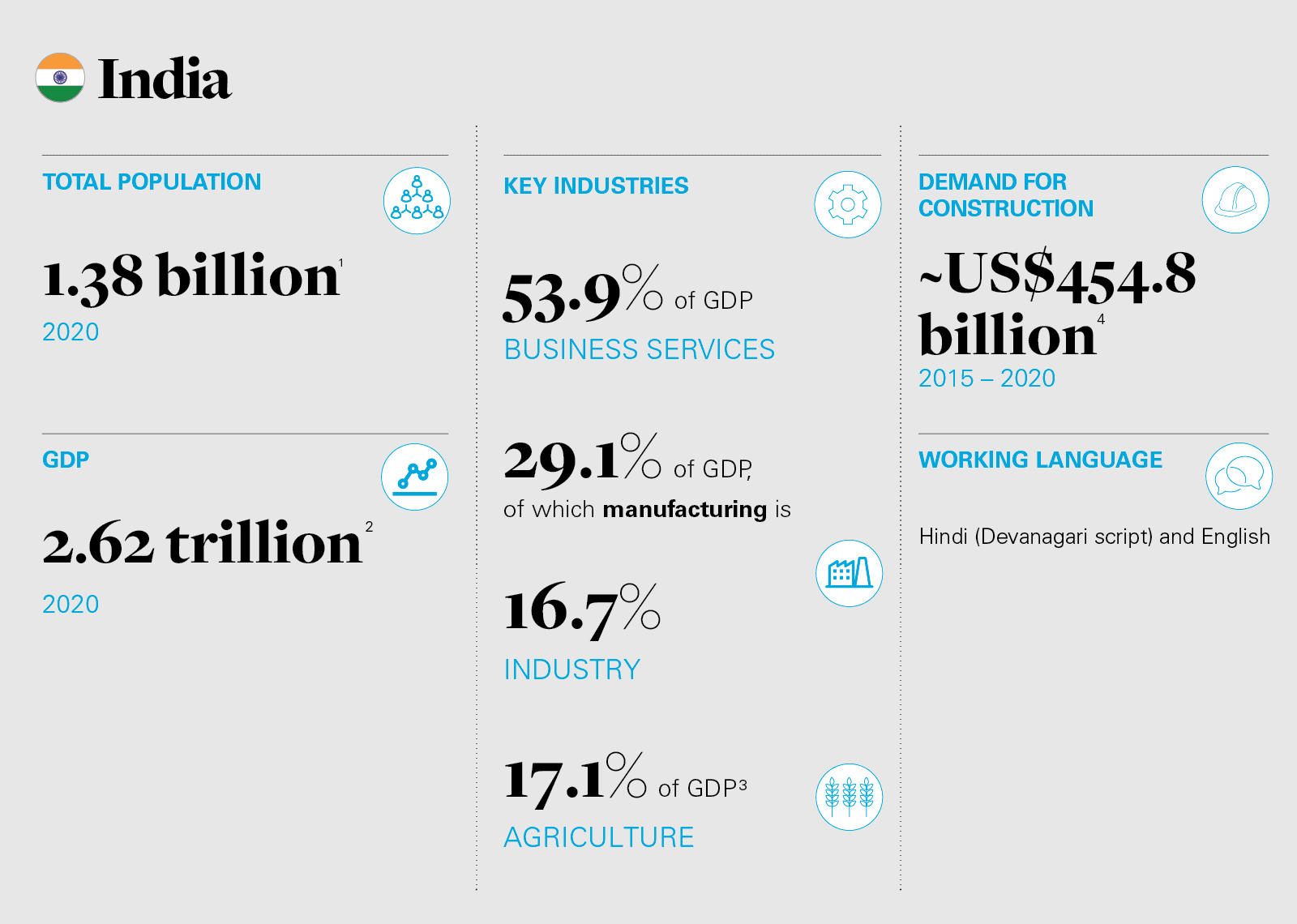 By 2025, the construction market in India is expected to emerge as the third-largest globally, with output expected to grow on average by 7.1 percent each year.8

India is a common law country, with its laws based historically on English law.

Thus, there are no restrictions on foreign investment in the construction sector.

However, in light of the COVID-19 pandemic, India has imposed certain foreign investment restrictions aimed at preventing "opportunistic takeovers or acquisitions of Indian companies" by investors situated in countries that share a land border with India.10 These restrictions extend to sectors otherwise covered under the "automatic route" such as the construction sector. Since these restrictions are responsive to the evolving situation created by the COVID-19 pandemic, they are subject to change from time to time.

Is your contract enforceable under Indian law?

Both bespoke construction contracts and forms such as FIDIC, NEC, etc., are enforceable under Indian law if they meet the requirements of the Contract Act.

Under the Contract Act, there are two main remedies for breach of contract: damages and specific performance.

The non-breaching party can bring a claim for damages under either Section 73 (damages for breach) or Section 74 (liquidated damages) of the Contract Act.

Indian courts acknowledge that different classes of contracts may exist, for which it is impossible to assess compensation for breach.15 In such cases, Indian courts defer to any liquidated damages provision contained in the contract.

Most construction contracts, however, carve out from exclusion or limitation of liability clauses fraud, willful misconduct, recklessness or gross negligence. Establishing any of these exceptions generally requires the non-breaching party to discharge a high burden of proof.

How does a contractor secure adequate cash flow in India?

From a legal standpoint, a contractor can secure adequate cash flow in several ways under the Contract Act:

Apart from these general contractual mechanisms, there are no statutes protecting unpaid contractors per se in case of interruption or cancellation of major projects.25

When does a right to terminate arise from a breach of contract under Indian law?

Under Indian law, the Contract Act entitles a party to terminate a contract under these circumstances:

The termination of a contract obliges parties to restore any benefits that they have received under the contract. The parties may additionally claim damages and compensation that are foreseeable and arising from the breach of contract, as provided under Sections 73, 74 and 75 of the Contract Act.

When a breach of contract arises, a party may exercise its right to terminate under the contractual provisions or under the Contract Act.

The parties may prescribe certain circumstances that allow either party to terminate the contract. Examples include completion of work beyond a certain time limit, force majeure, liquidation or bankruptcy, abandonment of work, and failure to carry out remedial work, and failure to secure relevant local licenses or permissions.

Generally, a force majeure clause will include specifically events such as floods, sabotage, earthquake, strikes, riots, epidemics, etc. They sometimes exclude circumstances from their coverage, such as fluctuations in foreign exchange rates, increases in costs of machinery, equipment, materials, spare parts, etc.26

In the case of construction projects, contracts usually contain detailed risk allocation provisions outlining who bears the risk of unforeseen circumstances such as force majeure or impossibility of performance.

To invoke Section 56 of the Contract Act, the frustration event:

Disputes under construction contracts can either be resolved through the dispute resolution mechanism agreed in the contract or through avenues available at law if no contractual mechanism exists.

India does not have any specialized courts or tribunals that deal with construction disputes. Nonetheless, the Commercial Courts Act 2015 empowers commercial courts in India to adjudicate disputes arising out of construction contracts.

Below is a brief overview of each available mechanism:

That said, India's ongoing efforts to modernize its arbitration framework have led to a number of arbitration institutions being established in India. These include: