The outlook for investment in the aviation sector remains encouraging, despite a backdrop of mounting fears about a global economic slowdown amid various geopolitical tensions. However, while the big picture is one of cautious optimism, the mood varies markedly around the world, with some markets much less upbeat.

As our survey findings reveal, more than half of the respondents in this research (61%) expect investment in the sector to increase during 2020; only 26% anticipate a decline in investment.

While overall investment in aviation and aircraft financing may be likely to increase, the flow to different regions could be disproportionate. In Asia, for instance, a large, growing middle class population is supporting demand for air travel, while emerging low-cost carriers offer lower fares. In contrast, within Europe, a combination of economic stagnancy and Brexit is having a sizeable impact on the industry.

Expectations of activity in the aircraft financing market are also mixed. Overall, 61% of respondents anticipate increased activity during 2020, while only 22% predict a decline. However, APAC-based respondents are predominantly optimistic about the outlook, with 83% predicting an increase in aircraft finance, while only 55% of their counterparts in North America say the same. Meanwhile, sentiment in EMEA is depressed, with the number of respondents who expect reduced aircraft financing activity this year (44%) higher than those who look forward to an increase (37%). 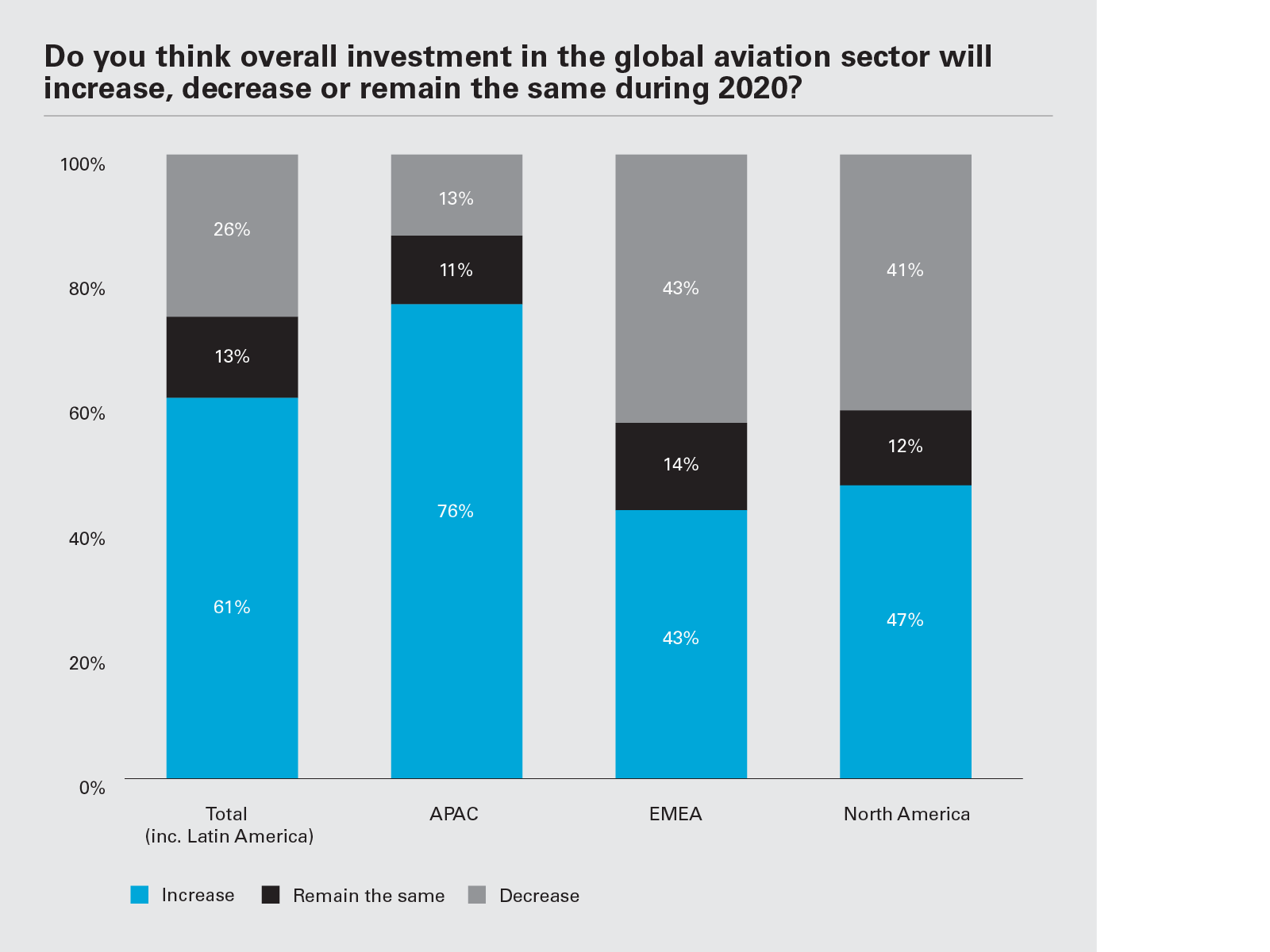 Do you think overall investment in the global aviation sector will increase, decrease or remain the same during 2020? (PDF)

Inevitably, the contrast between APAC and Western markets—EMEA in particular—reflects a broader economic context. The International Monetary Fund's (IMF) latest World Economic Outlook report suggests the US economy is on course to grow by just 2.1% in 2020, due in part to the US-China trade dispute. In Europe, where the Brexit negotiations continue to cause uncertainty, the IMF's prediction is for only 1.4% growth in 2020. Asia's economies, by contrast, are expected to grow considerably more quickly, led by China, albeit at a slower pace than in recent years.

Local factors are also at play. For example, Europe's travel sector endured a torrid 12 months with a string of airline and travel industry failures, including the UK's Thomas Cook and FlyBMI, Germania, Iceland's Wow Air and Slovenia's Adria Airways. In the Middle East, concerns remain that the rapid expansion of the region's airlines may have resulted in overcapacity.

APAC, on the other hand, is where most aircraft are expected to be delivered over the next ten to 20 years. 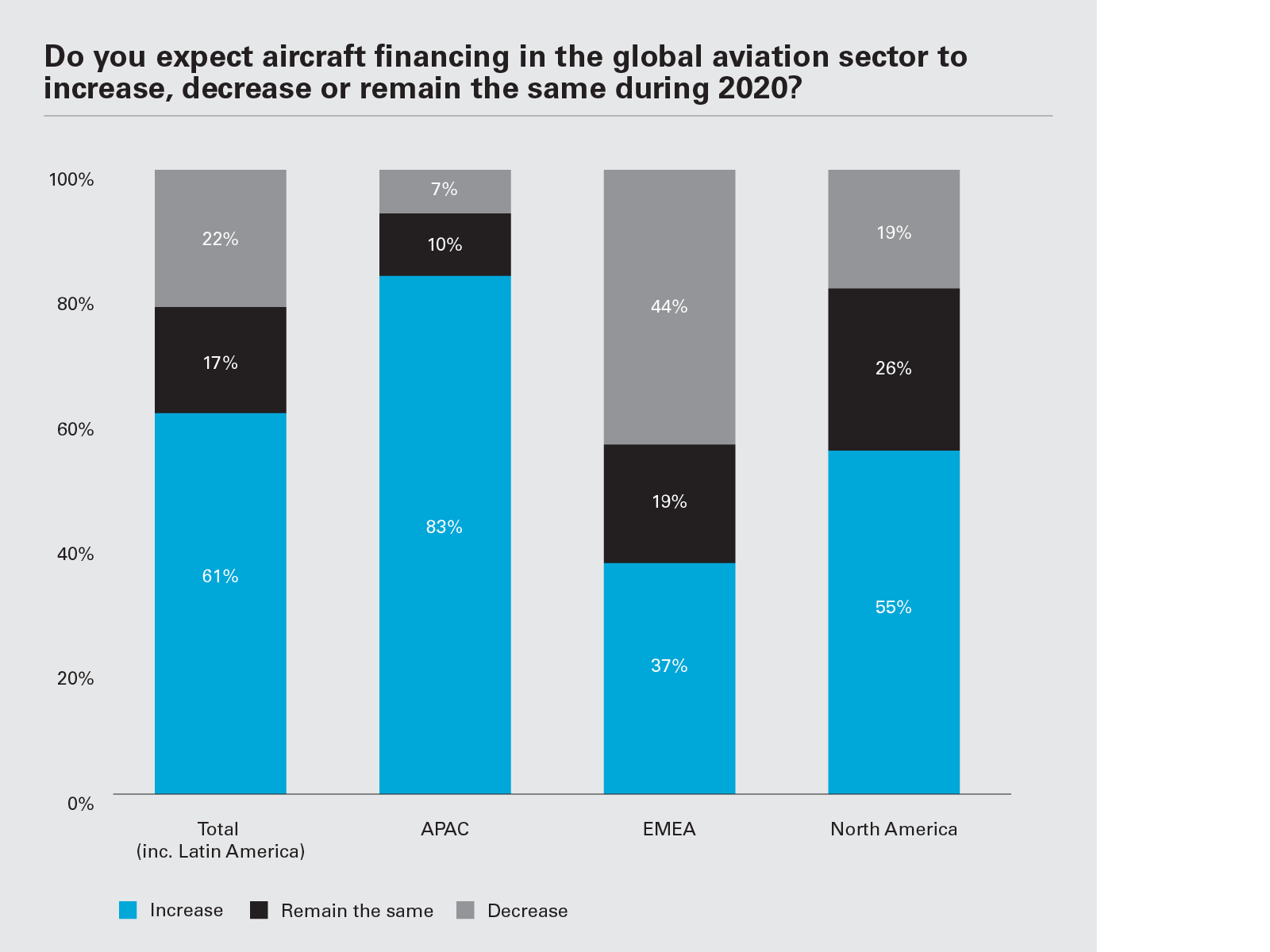 Do you expect aircraft financing in the global aviation sector to increase, decrease or remain the same during 2020? (PDF) 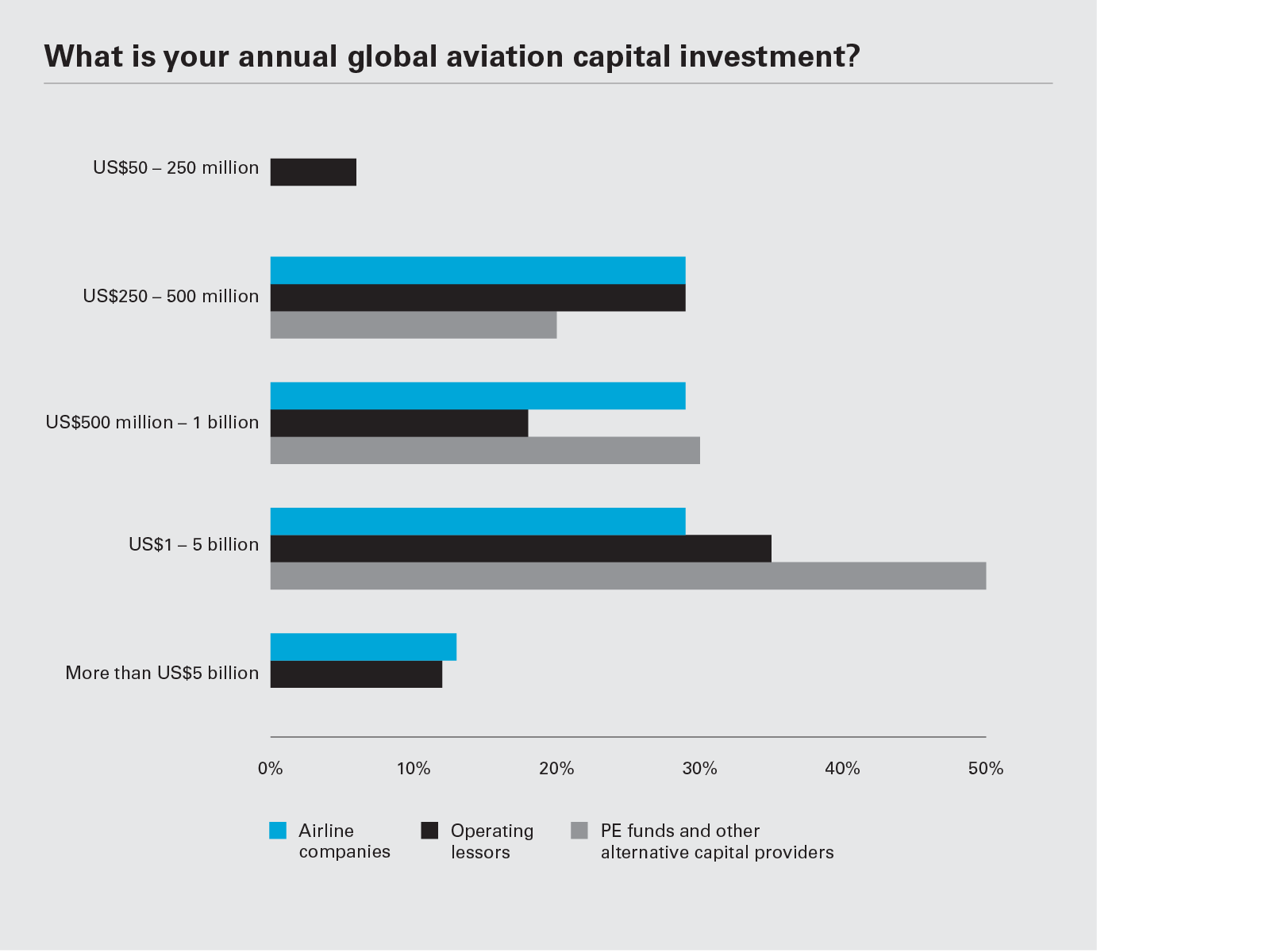 What is your annual global aviation capital investment? (PDF)

Overall, there likely will be considerable capital flows into the aviation sector globally during 2020, with investment coming from a mixture of sources. Half of the private equity firms in this research expect to invest US$1 billion to US$5 billion in the sector over the next year, with airlines and operating lessors also committed to significant levels of funding.

"The demand for airline services has created long-term potential for investors," remarks the Director of Finance at one EMEA-based airline, who predicts continuing interest from private equity and others.

In the financing market, banks remain committed to providing significant sums to the aviation industry. Indeed, the aircraft financing environment remains remarkably robust, with investors attracted to a market that has seen passenger numbers grow every year since 2010. There are tremendous amounts of liquidity, and competition for assets and talent is fierce. 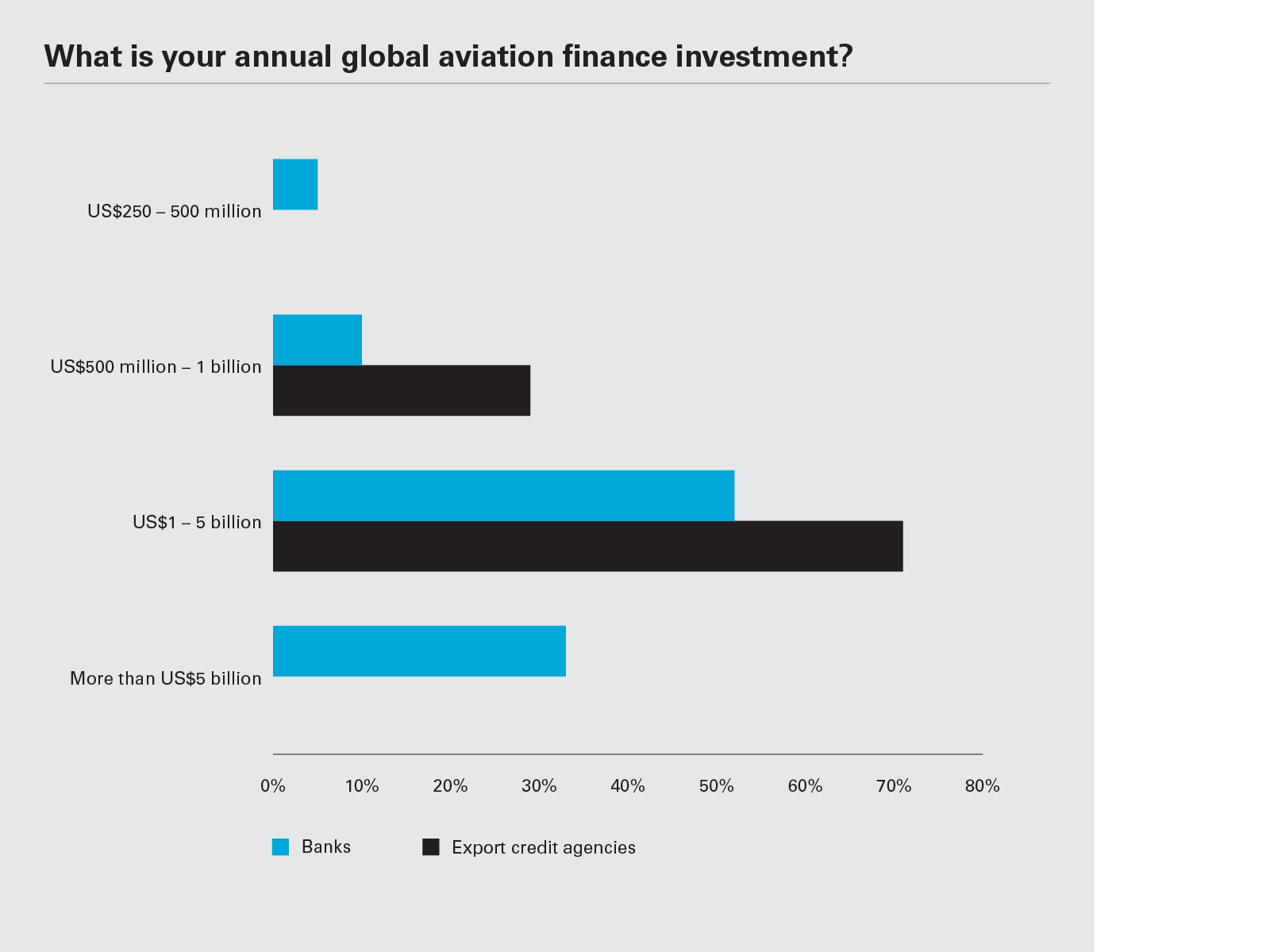