After a drop in activity in the second half of 2018, US M&A has recovered strongly in the first two quarters of 2019, demonstrating the appeal of dealmaking—despite uncertainty.

In spite of several quarters of growing uncertainty about macroeconomic headwinds, US M&A deal value grew again in the first half of 2019. Overall value for the first six months of the year was up 9 percent compared to the same period in 2018. And US deal value took up a larger share of global M&A, making up 53 percent of total global deal value, up from 41 percent in H1 2018. US deal volume, on the other hand, was down 21 percent compared to 2018, a record year for deal volume.

This is good news, particularly since global activity declined on both value and volume measures this year. But the future seems more uncertain today than it has in some time, particularly since there are strong reasons for both caution and optimism.

There are some signals warning that we are due for an economic correction, despite a US economy that remains healthy. US Federal Reserve Chairman, Jerome Powell, recently hinted at rate cuts, highlighting that uncertainty over trade policy and weakening global growth continue to have negative implications. Trade troubles persist, particularly with China. An inverted yield curve suggests that the market expects a downturn on the horizon. And, after a lengthy period of frenzied dealmaking, valuations are high.

Yet the US economic backdrop remains favorable, at least for now. Capital markets are at record levels and there is plenty of financing available for companies who need it to fund dealmaking. Private equity firms continue to amass capital to deploy.

Though deal volume has dropped for three quarters in a row, viewed in the longer-term context, activity remains robust.

Whether the second half of the year can sustain the same level of activity as H1 remains to be seen. The year-on-year growth in M&A value suggests that dealmakers still have appetite, as well as the capacity, to execute deals if the strategic rationale makes sense.

Private equity slows in 2019 as valuations continue to rise

H1 2019 has seen deal value continue to climb in technology M&A, as digital disruption overtakes segments of the market such as fintech and Big Data

Real estate M&A drops, but hopes are higher for H2

After a standout 2018, real estate M&A has dropped significantly in the first half of 2019, but segments of the market such as logistics and hotels have remained attractive

Can the good times last? Four factors shaping M&A in the second half of 2019

Many of the factors that have underpinned recent M&A activity remain in place, but concerns are mounting

The technology, media and telecoms (TMT) industry saw significantly more deals than any other during the first half of the year, racking up 42 percent more transactions than the next busiest sector: industrials and chemicals. These sectors were out in front by some distance, recording 622 and 439 M&A deals respectively during the first half, along with business services (352).

On the value front, the pharmaceutical, medical and biotech (PMB) industry led the way, with 282 transactions totaling just over US$172 billion—though more than half of this total stems from a single deal, Bristol-Myers Squibb’s US$89.5 billion purchase of Celgene. 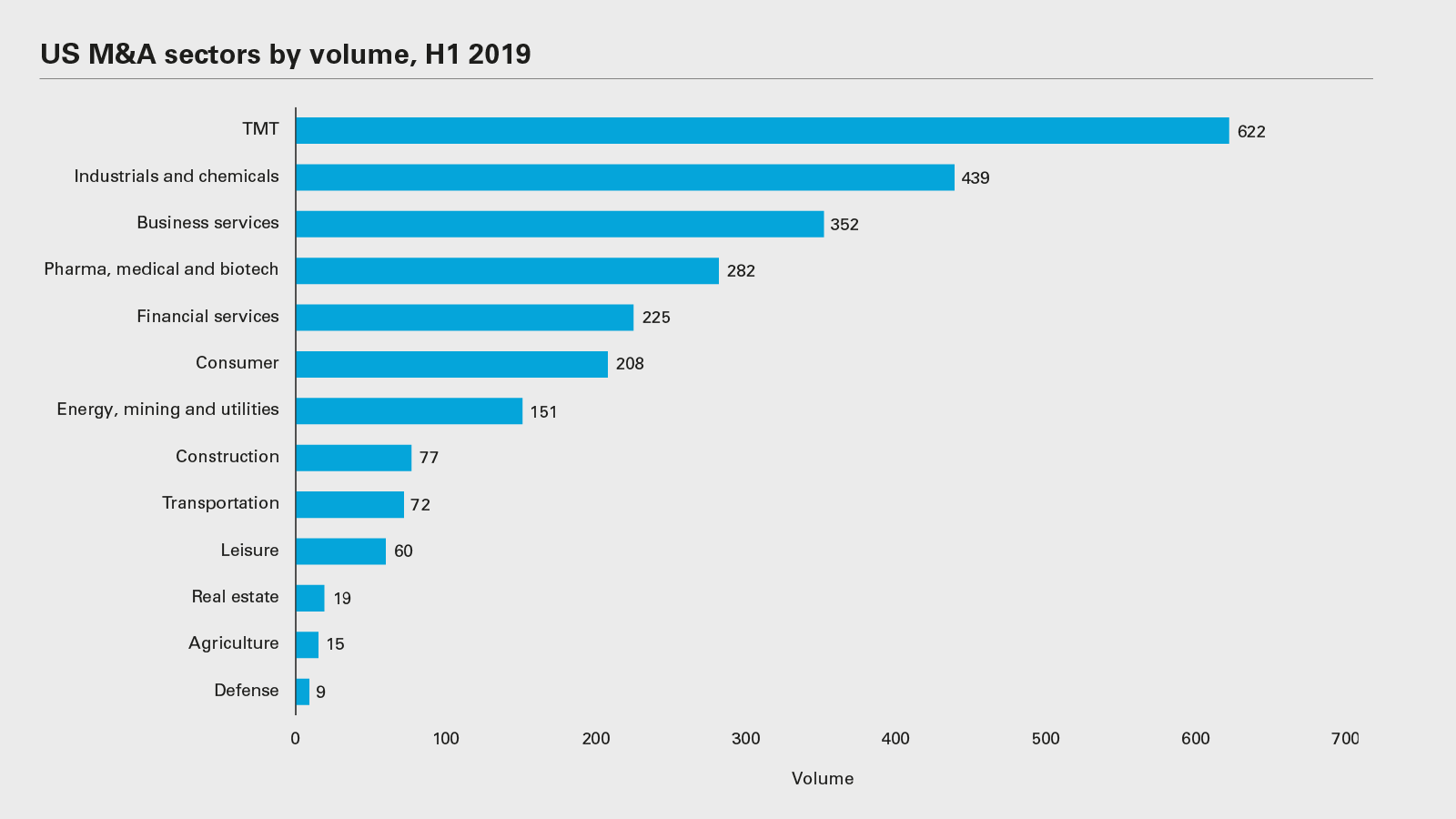 The TMT sector recorded the second-biggest total deal value during the first half of the year, with US$163 billion of transactions. Energy, mining and utilities ranked third, despite having only seen 151 deals, collectively worth just over US$123 billion.

Business services was the only other sector to post a total deal value of more than US$100 billion during the first half of the year, with transactions collectively worth a little over US$116 billion. 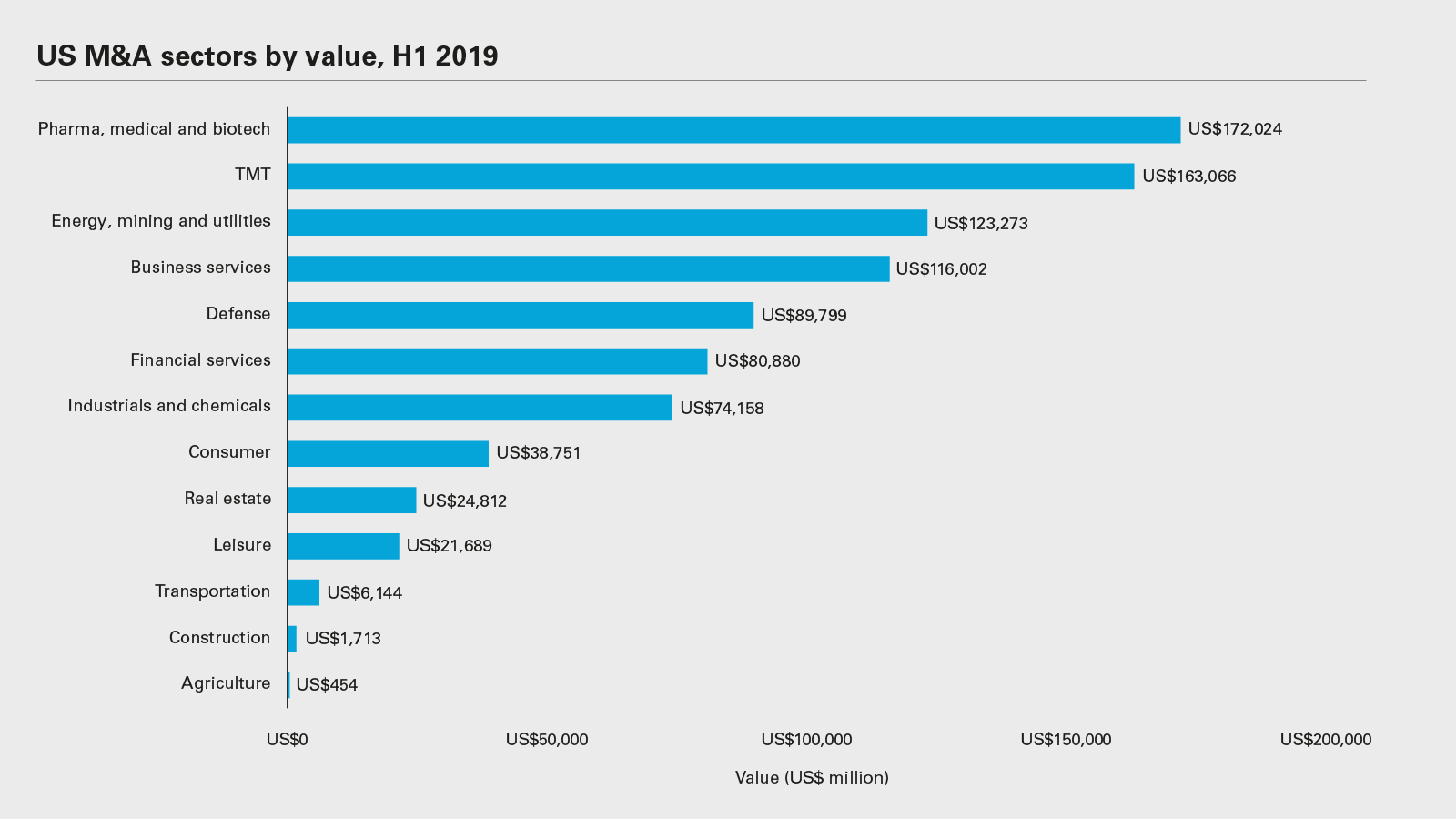