What does the future hold for the aviation sector? Many in the industry are conscious of an elevated level of risk. More than half (61%) regard recession and/or economic volatility as among the greatest threats to their profitability over the next 12 to 18 months, with significant numbers concerned about regulatory issues and compliance, as well as political instability.

Competition is also an industry concern. "The rate at which the competition has increased both domestically and at an international level is alarming," says the Chief Financial Officer of a Latin American airline. 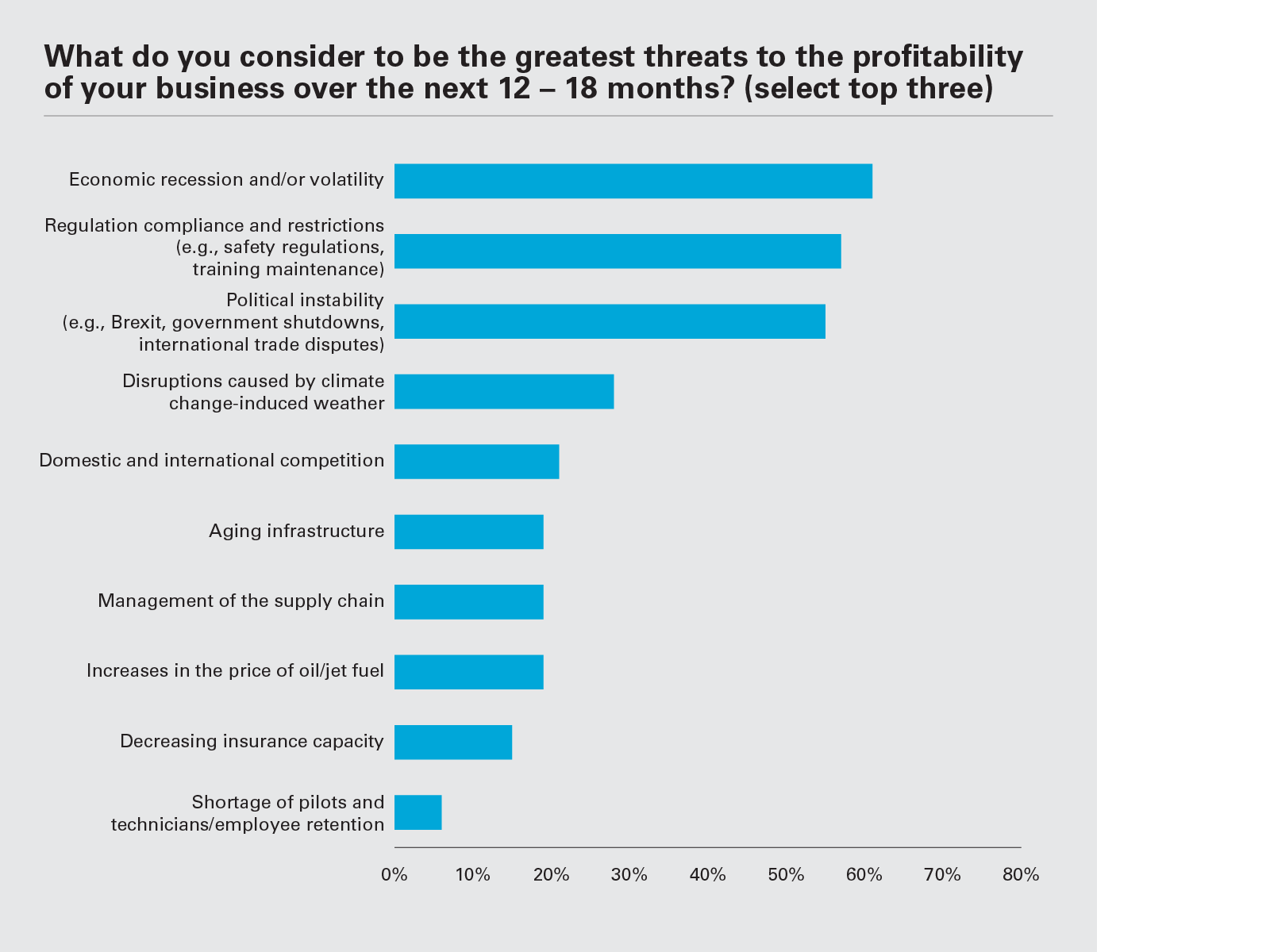 What do you consider to be the greatest threats to the profitability of your business over the next 12 – 18 months? (select top three) (PDF)

One possible response to these threats will be to seek greater scale, particularly in the most fragmented areas of the industry where smaller players may welcome the protection of a larger parent company. Indeed, M&A activity in the sector was strong during 2019, and many expect consolidation to continue in the year ahead. In fact, 40% of respondents expect merger activity to be significant during 2020, while a further 54% anticipate slight or moderate consolidation.

"More M&A is likely," predicts the Managing Director of an APAC-based bank. "Airlines are going to have to do more strategic deals to cope with the situation they face." 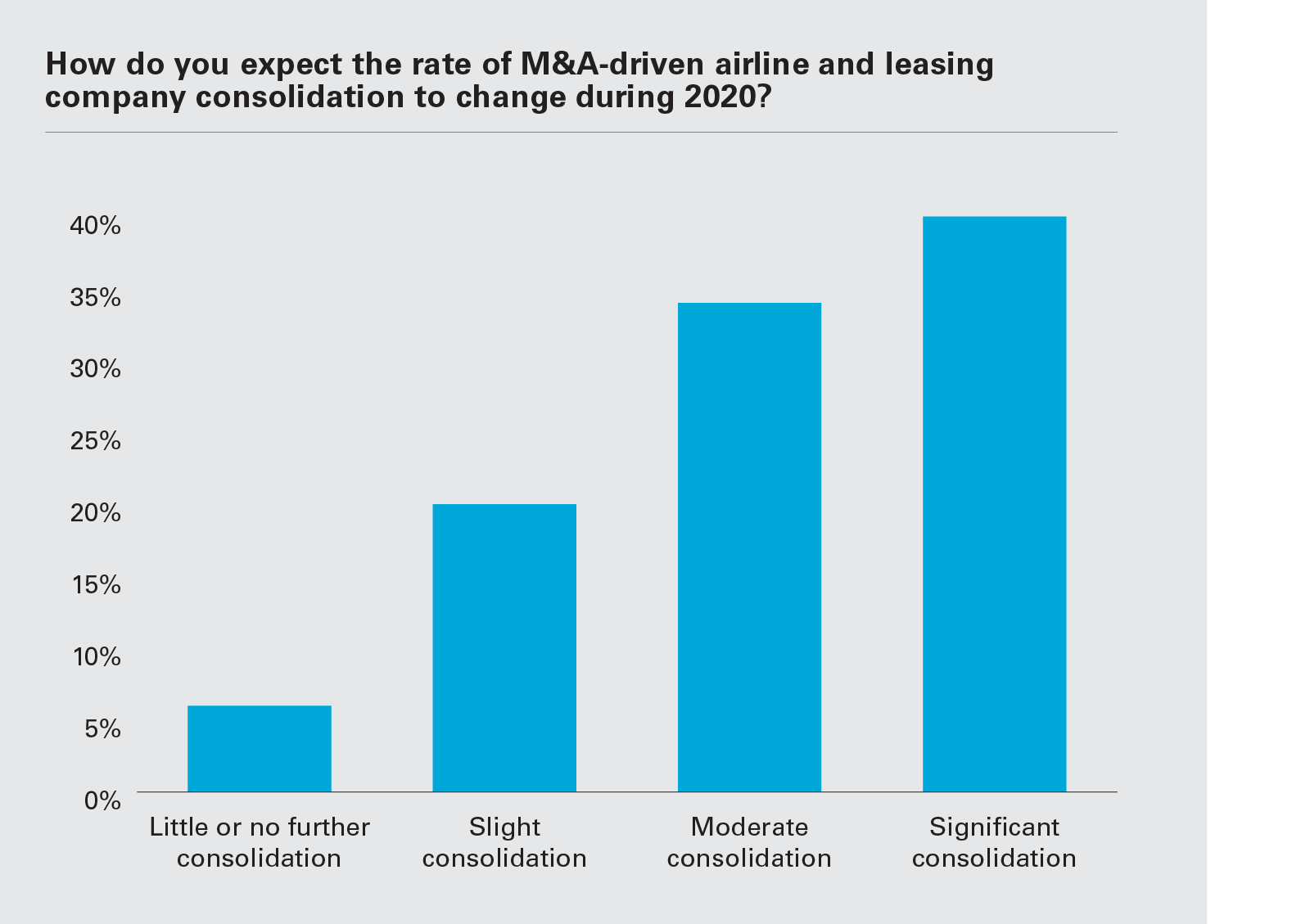 How do you expect the rate of M&A-driven airline and leasing company consolidation to change during 2020? (PDF)

Elsewhere, the outlook for oil prices appears unchallenged amid expectations of depressed global economic growth, although tensions or outright conflict in the Middle East could undermine that view. The US Energy Information Administration forecasts an average price of US$60.51 a barrel for Brent Crude during 2020, which would represent a moderate fall compared to US$63.93 in 2019.

Nevertheless, 70% of respondents say they have already begun preparing for a potential increase in oil prices over the year ahead, while a further 27% have plans to do so. In an unpredictable political and economic environment, where many in this sector are already feeling the pressure of more difficult trading conditions, there is a strong desire to be prepared in case fuel prices rise. 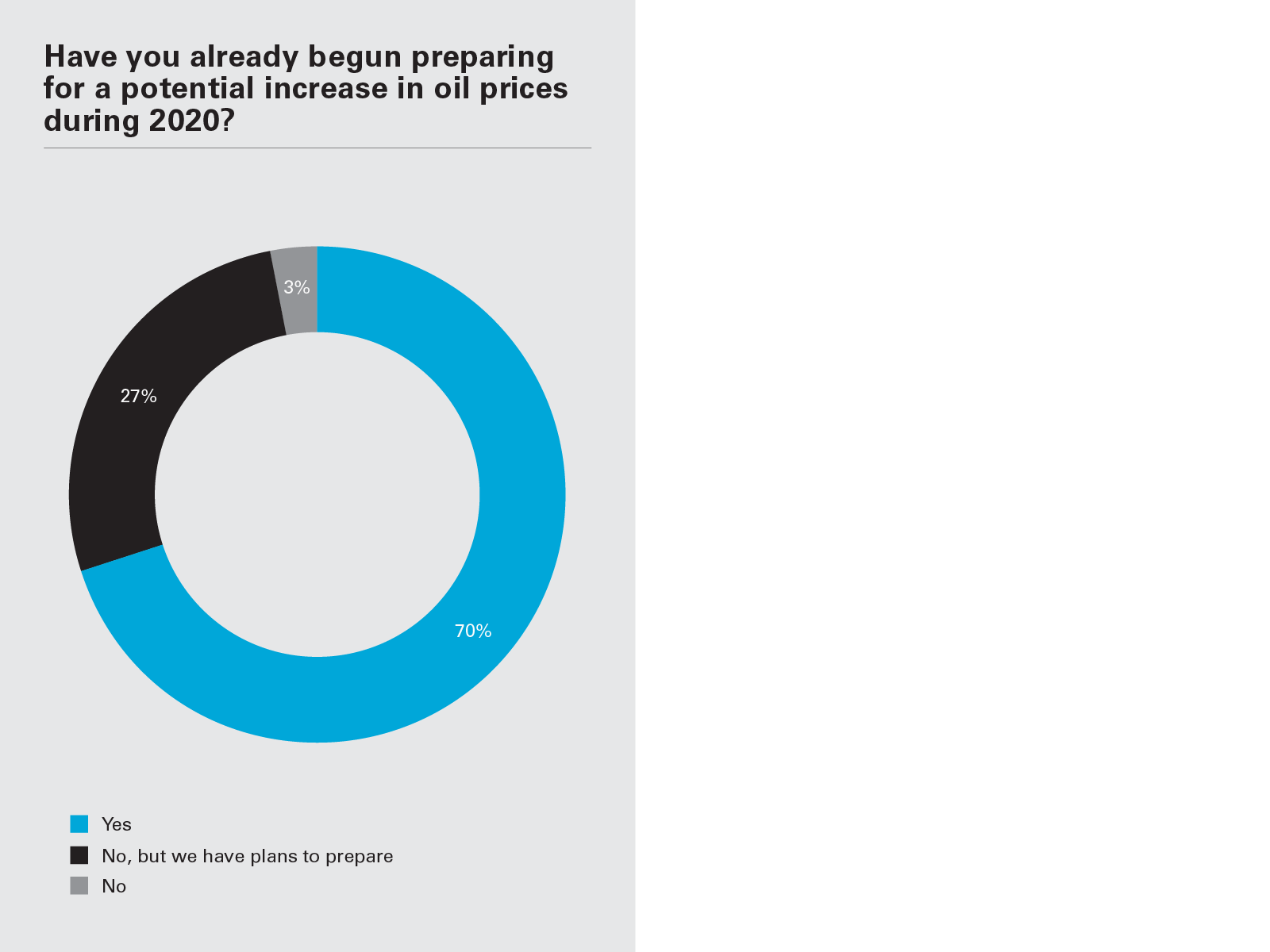 Have you already begun preparing for a potential increase in oil prices during 2020? (PDF) 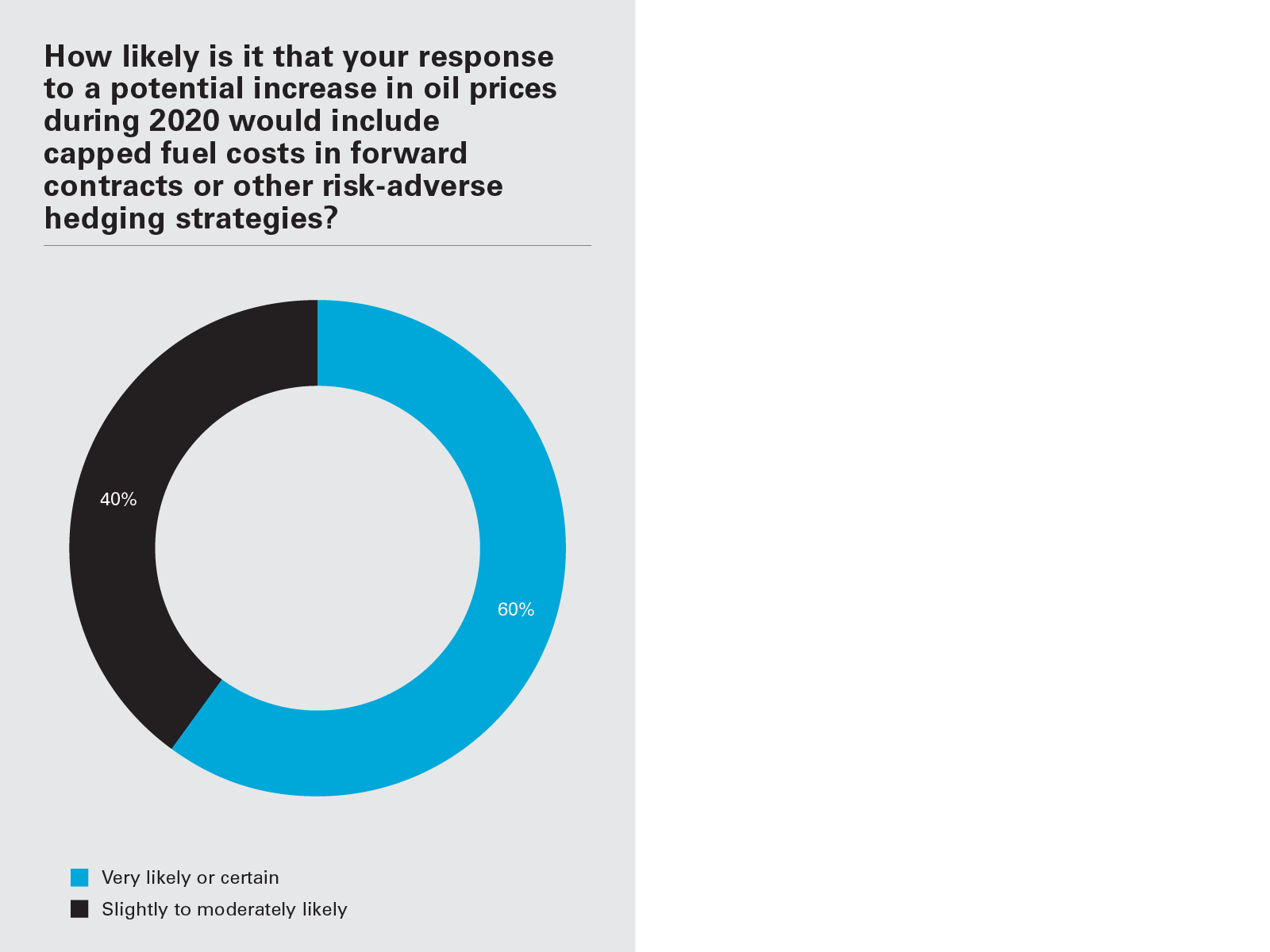 How likely is it that your response to a potential increase in oil prices during 2020 would include capped fuel costs in forward contracts or other risk-adverse hedging strategies? (PDF)

If prices do start to increase, hedging strategies such as seeking to cap fuel costs through derivatives contracts will be an important focus for many in the industry. "We have begun preparing for the potential increase in oil prices during 2020," says the Head of Strategy at a North American airline. "We would like to be prepared with appropriate plans and resources. Ensuring consistent returns while executing our growth plans will be our main objective."

There are other challenges ahead, too.

In every part of the world, respondents report significant frustration about shortcomings in local infrastructure. In EMEA, it has become increasingly difficult to secure policymakers' consent for new airport construction or airport expansion, with the environmental concerns likely to make such developments even more challenging. For example, plans to expand Heathrow Airport in the UK remain mired in political controversy. In APAC, meanwhile, where new airport building has proceeded in fast-growing economies such as China and India, there is still concern that regional networks of secondary airports are insufficient. Nor is it just the physical infrastructure that matters. In regions experiencing rapid growth, there is often also a shortage of pilots and other airline staff. 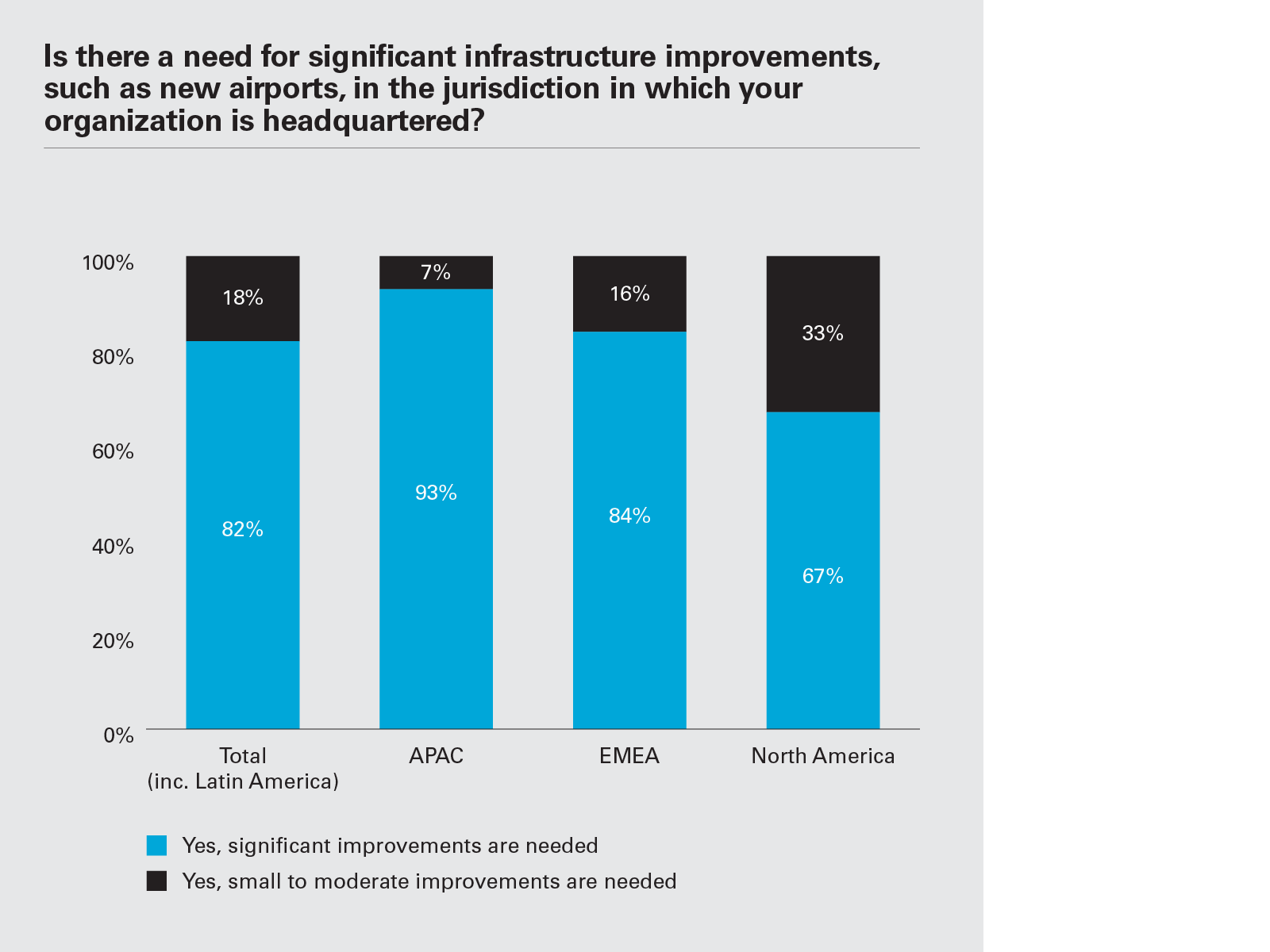 Is there a need for significant infrastructure improvements, such as new airports, in the jurisdiction in which your organization is headquartered? (PDF)

Another issue for some respondents has been delivery delays or suspended operations of certain aircraft. In this research, respondents in EMEA are most likely to have suffered significant short-term negative impacts due to such delays or expect to do so. Respondents in all regions report at least slight to moderate short-term negative impacts, which can be distracting. "Delivery delays are to be expected when dealing with aircraft of this size," says the Chief Marketing and Strategy Officer of a North American operating lessor. "But we want to be able to focus our attention on new opportunities rather than sorting out these challenges."

Finally, it would be shortsighted to overlook the potential impacts of climate change, particularly over the longer term, as regulators and policymakers focus on the airline industry as a significant carbon emitter. Right now, respondents in Latin America are among the most concerned about what this might mean for the sector. This topic is especially close to the political front burner for Latin America, given the vulnerability of the Amazon region.

Nevertheless, despite the difficulties of the macro environment and industry-specific concerns, such as infrastructure and aircraft delays, many in the aviation sector continue to look forward to growth. The greatest opportunities are now likely to be found in developing economies rather than the more mature markets of the West. 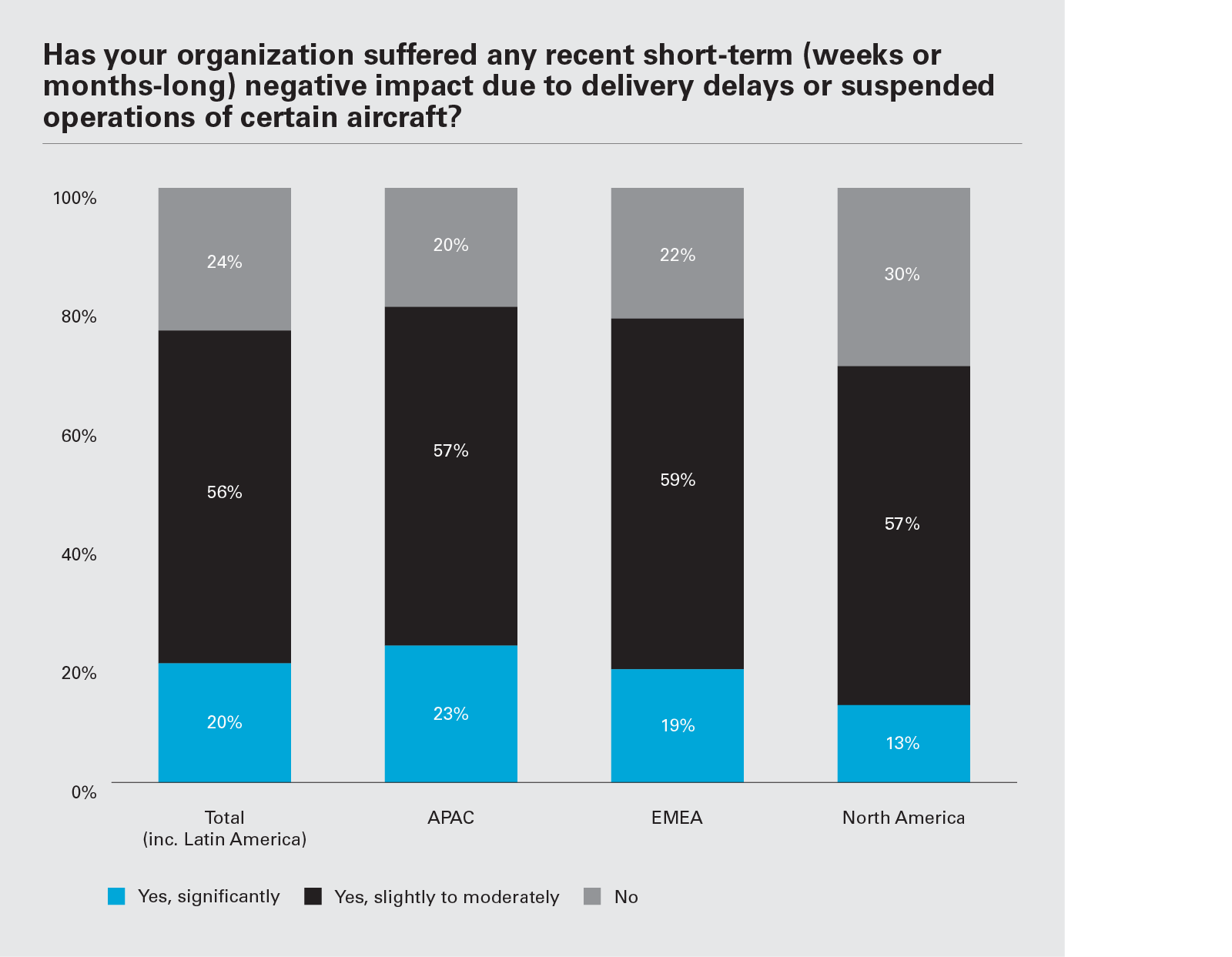 Has your organization suffered any recent short-term (weeks or months-long) negative impact due to delivery delays or suspended operations of certain aircraft? (PDF) 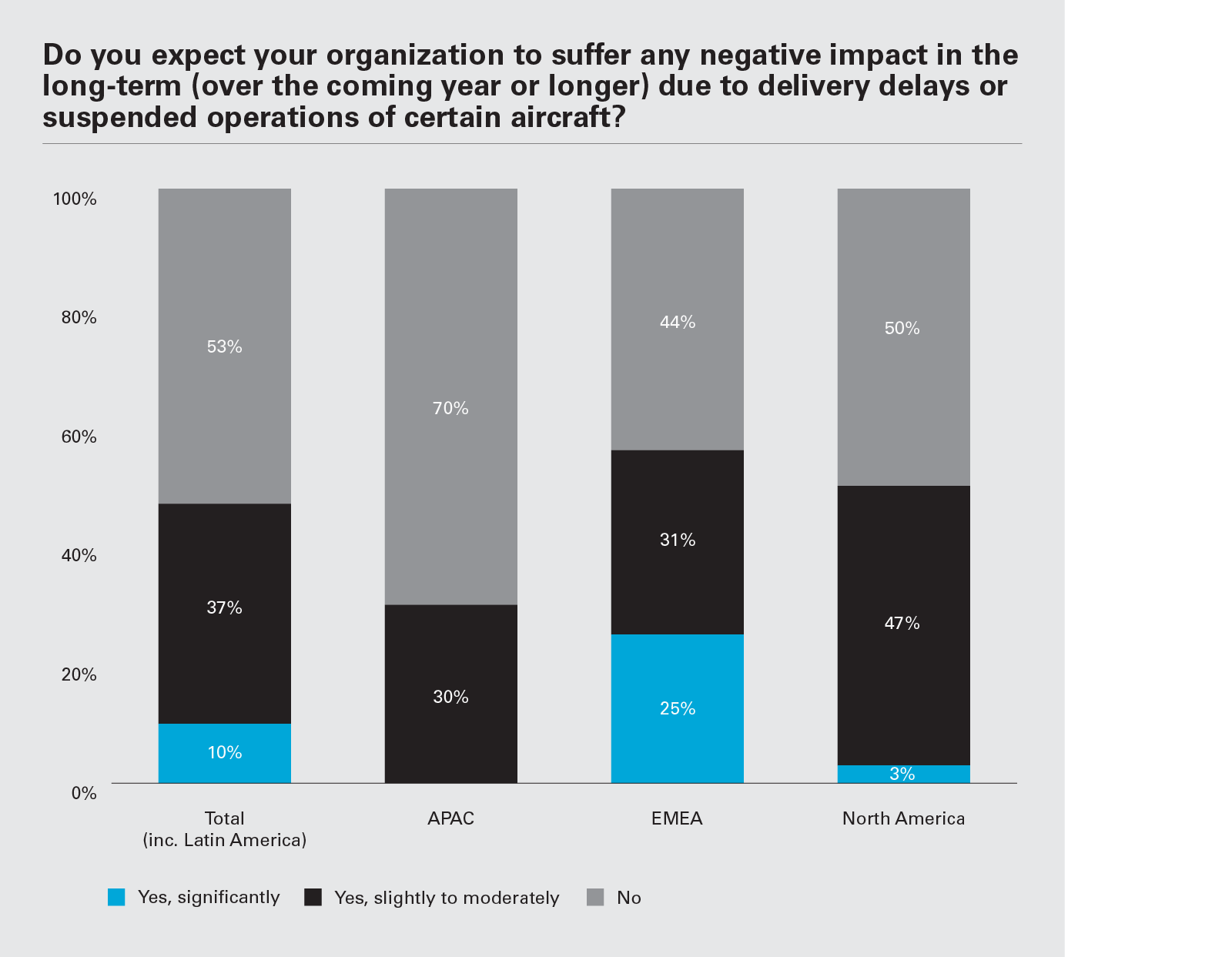 Do you expect your organization to suffer any negative impact in the long-term (over the coming year or longer) due to delivery delays or suspended operations of certain aircraft? (PDF)

Asked to pick the two regions where they expect the fastest growth in 2020, 94% of respondents picked Asia, while 47% chose Africa. "There has been a significant rise in the demand patterns for airlines in these regions," says the Head of Strategy at an APAC-based operating lessor. "Airlines are having to increase the number of aircraft and cover newer destinations to support these changing demands. This has increased the potential for lessors and financing institutions as well."

By contrast, respondents expect the two slowest-growing regions to be Europe (cited by 84% of respondents) and the Middle East (45%). Economic difficulties in the former and excess capacity concerns in the latter appear to worry the sector. 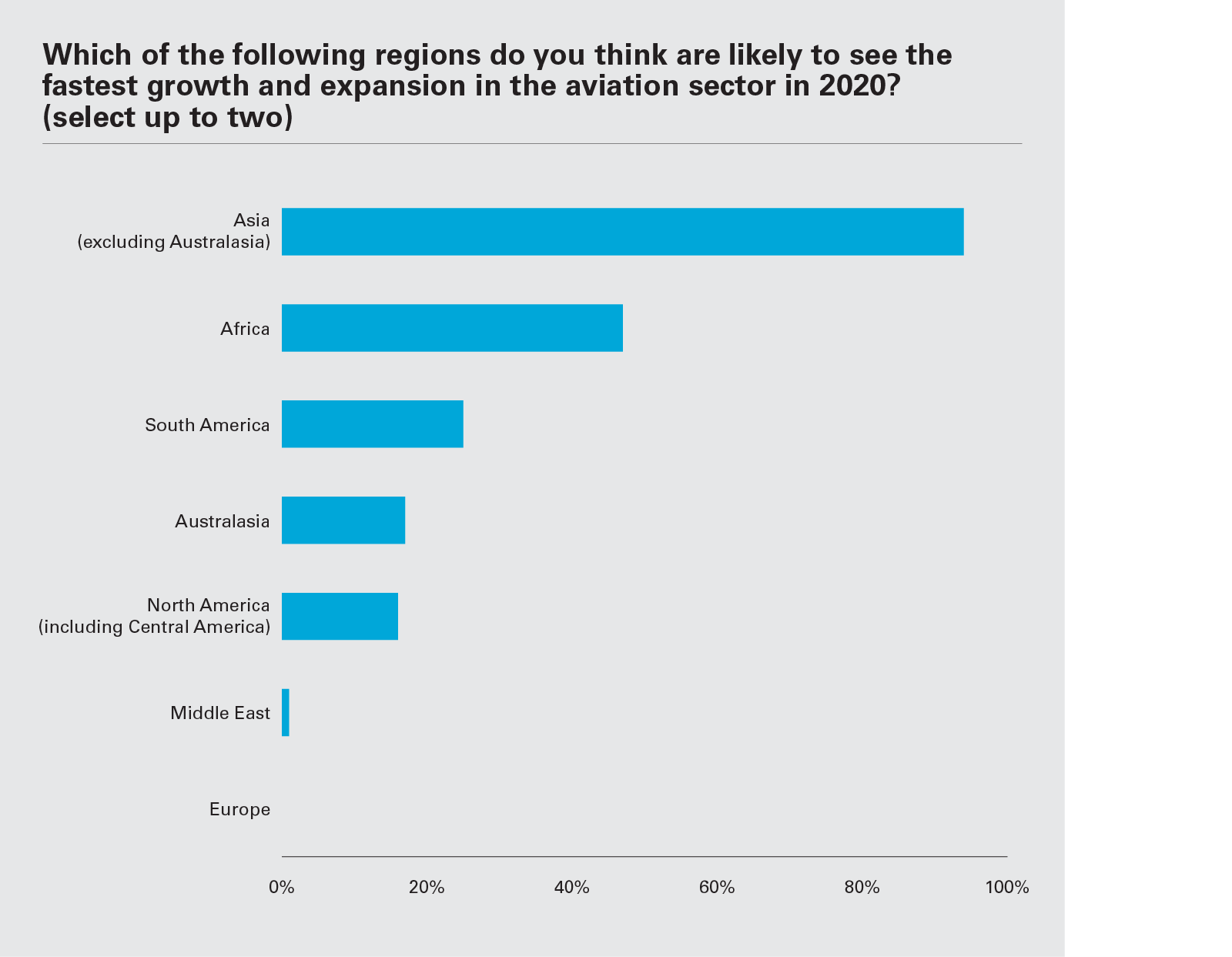 Which of the following regions do you think are likely to see the fastest growth and expansion in the aviation sector in 2020?(select up to two) (PDF) 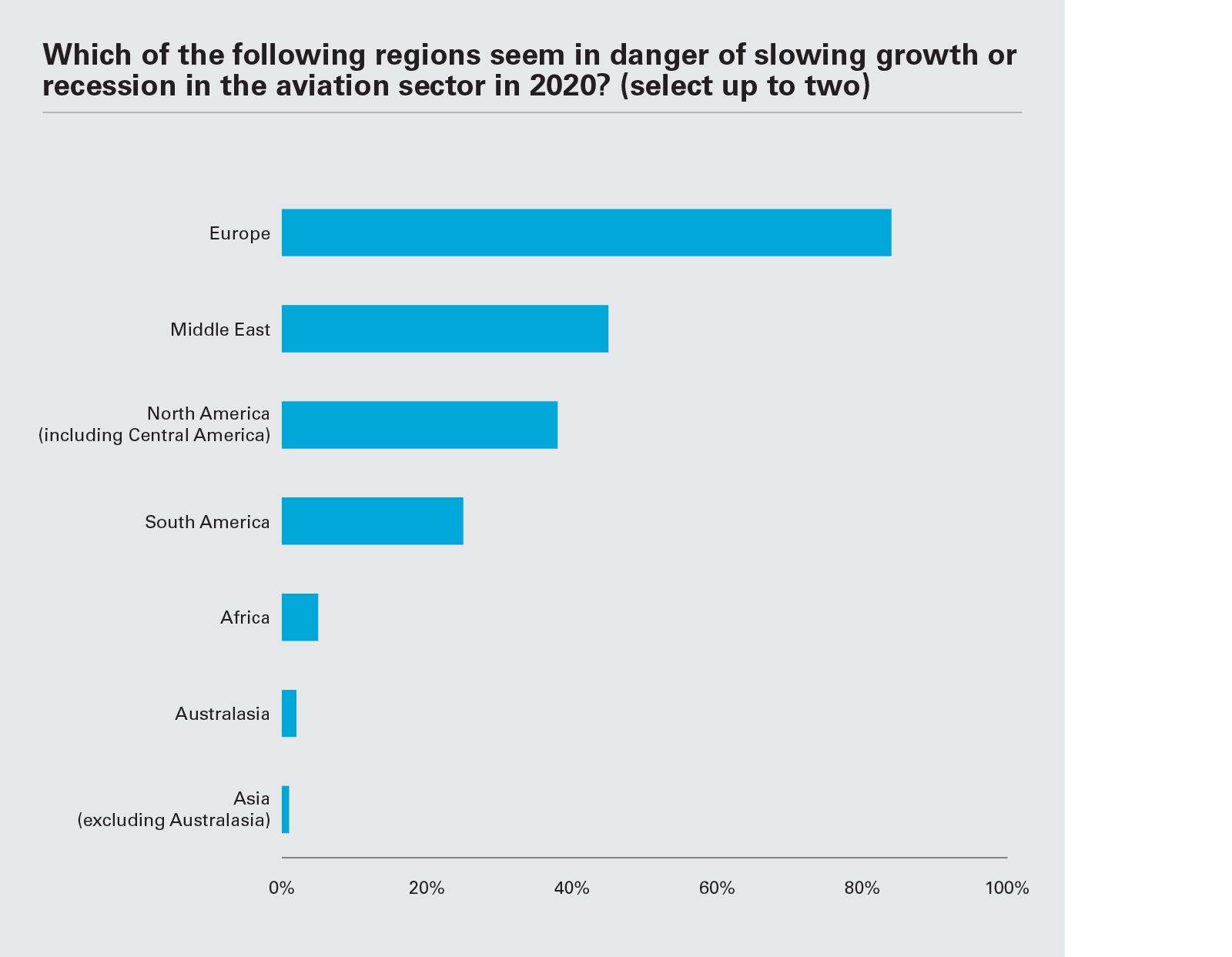 Which of the following regions seem in danger of slowing growth or recession in the aviation sector in 2020? (select up to two) (PDF)
Click here to read the full magazine
Navigating turbulence