Alternative Facts: "We are seeing history repeat itself"

White & Case's US Asian Affinity Network recognized Asian Pacific American Heritage Month—which celebrates the culture, traditions and history of Asian Americans and Pacific Islanders in the US—by illuminating how politics and the law can be a powerful weapon of bias.

On May 21, the Network held a virtual screening of the documentary film, Alternative Facts: The Lies of Executive Order 9066, followed by a panel discussion on the US internment of Japanese Americans during World War II and the relevance of this historical moment to the present day challenges faced by minority groups in the US. Using the lessons of US government actions during World War II, both the film and the panelists emphasized the fragility of democracy and the importance of speaking out when racial or religious communities are targeted with fear, hatred and hostility.

Alternative Facts shows how policies of the US government were a source of anti-Asian racism. The film explains that during the early 20th century, Japanese immigrants were restricted from entering the US and barred from owning agricultural lands (due to their success as farmworkers). The combination of political influences and anti-Asian racism led to President Franklin D. Roosevelt's Executive Order 9066 authorizing the US military to force nearly 120,000 Japanese Americans, most of whom were US citizens, into detention camps. US government officials then presented false information to the US Supreme Court in 1944 while prosecuting Fred Korematsu for trying to avoid the camps, resulting in a 6-to-3 ruling that allowed the mass incarcerations (Korematsu v. United States).

A 1983 pro bono legal team worked to re-open Mr. Korematsu's case, showing the US government had suppressed evidence from intelligence agencies that Japanese Americans posed no military threat to the US, and overturned his conviction. The US Supreme Court officially repudiated the Korematsu ruling in 2018 in Trump v. Hawaii, which nonetheless upheld the Trump administration's ban on travelers and immigrants from certain countries.

After the film, Sylvia Chin moderated a discussion among: Jon Osaki, the director of Alternative Facts; Dr. Karen Korematsu, the founder and Executive Director of the Fred T. Korematsu Institute and daughter of Mr. Korematsu; and Donald Tamaki, a member of the 1983 legal team that reopened Mr. Korematsu's 1944 US Supreme Court case. 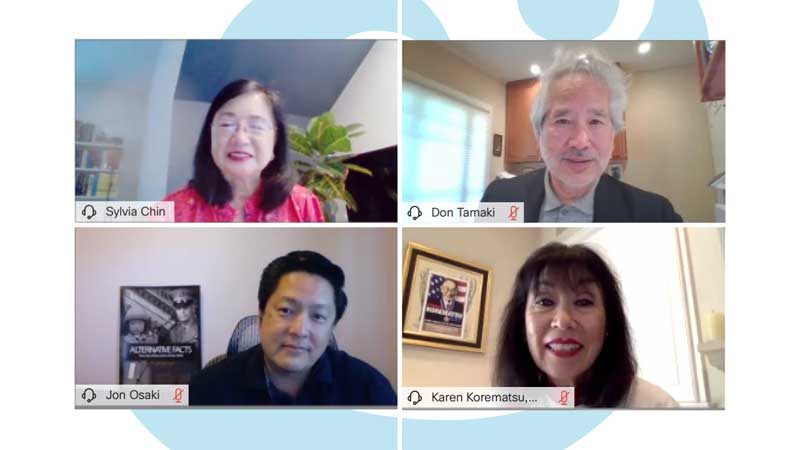 According to Mr. Osaki, the film is "a story about being the unwanted immigrants" that has parallels to today, with individuals using racism to appeal to their political base and the majority of Americans either silently agreeing or acting as bystanders. To him, the lesson is "we must speak out whenever any people are scapegoated."

Ms. Korematsu explained that she believes her father's experience is "more relevant now than ever." Citing the successful pro bono efforts of her father's 1983 legal team, she urges all lawyers and law students to perform pro bono work and "if nothing else, please vote."

Ms. Chin highlighted the risks of current political rhetoric that leads some people to "feel no compunction about attacking Asian Americans," such as recent political leaders who call COVID-19 "the Chinese virus" and associate it with Asian Americans.

As Mr. Tamaki pointed out, the 2018 US Supreme Court did not ask to view documents that would demonstrate a valid basis for the administration's actions in Trump v. Hawaii. Instead, by deferring to the judgment of an equal branch of government, the Supreme Court failed again to serve as a check that could prevent abuses of executive power, in his view. "As lawyers, we have a special responsibility to protect democracy." And "we are seeing history repeat itself."