What Headlines Missed About 'Cartel' Traders' Trial 1 Year Ago

One year ago, a Manhattan federal jury acquitted three British foreign exchange traders of antitrust violations —including our client, Richard Usher, a former JP Morgan Chase & Co. forex trader based in London — for their participation in an online chatroom known, by outsiders, as "the cartel."[1]

Despite flashy headlines about "the cartel" leading up to the trial, and despite the government's intense focus at trial on "cartel" chats, the New York City jury rejected the notion of an illegal cartel agreement, acquitting the defendants and sending the three men home to the U.K.

So what did the headlines miss about the U.S. v. Usher et al. forex antitrust case? Are forex traders, who buy and sell from each other all day, every day, really head-to-head competitors? Can the trading of a few individuals in major currency pairs really impact rates in a market many, many times larger than the New York Stock Exchange and NASDAQ combined? And do forex traders sitting in another country have the requisite criminal intent to affect prices in the United States?

In this article, two of Usher's lawyers debunk some common myths about the cartel allegations in the case.[2]

Instead, in the forex market, traders in the interbank market buy from and sell to each other as trusted counterparties. In antitrust parlance, they have a vertical buy-sell relationship, not a horizontal relationship. (Just as the buyers and sellers of a used car have to agree on price, so, too, do currency traders buying and selling currency.)

The law is clear that when the challenged conduct involves a mixture of horizontal and vertical relationships, the restraint of trade is analyzed under the deferential rule of reason and should not be brought criminally.[3] Criminal price-fixing cases are restricted to per se violations.[4]

Unlike large market capitalization, publicly traded stocks on U.S. exchanges, individual forex orders are often worth hundreds of millions of dollars and can be harder to source. There is no E-Trade for forex. Traders might have sourced smaller forex orders — say of $1, 2 or 10 million— through electronic exchanges such as Electronic Broking Services.

But when customers ask traders, for example, to sell 100 million EUR-USD, traders often fill that trade with their counterparts at other banks. In other words the banks were selling to each other, like when Fiat Chrysler Automobiles has a surplus of tires and sells some to Ford Motor Co.[5] The banks may have competed for sales outside of forex, but in buying and selling of forex itself — as in the indicted chatroom — they were counterparties; interbank forex trades are vertical.

Moreover, the fact that traders were receiving customer orders and attempting to fill them in the marketplace tended to bust the myth portrayed in the media that the traders were somehow "playing" with bank money. To the contrary, the traders had a duty to find a source of liquidity in order to execute customers' orders.

The government's expert on forex, Dr. David DeRosa, only reinforced these points at trial. Dr. DeRosa has written a number of books on forex trading; defense counsel placed a stack of them at the lectern on cross-examination. In those books, as Dr. DeRosa acknowledged, he repeatedly calls forex traders "counterparties" and never competitors.[6]

That should be easy in the era of interconnected global markets, right? Think again. Trial testimony established that the traders, sitting in London, placed bids on trading platforms with servers physically located in Europe at certain times during the London trading day, and the prices were set based on benchmarks calculated by European entities (WM/Reuters and the European Central Bank).

The traders, who typically dealt with their counterparties at other big banks, did not typically know who the "end-user" customers were (or where they were) for their trades. And they knew nothing about where the trades ultimately settled. In such circumstances, could the traders be said to intend that their trading (assuming it impacted the rate) substantially affect the U.S. market? Not, apparently, according to the jury. Moreover, the evidence showed the traders had at most a tiny share of the market.

Myth 3: As market makers, the "cartel" traders had a large share of the overall market.

At trial, the government made much of the traders' status as "market makers" at their banks. The government put together charts to show that at certain instants in time during the trading day the traders represented a high percentage of the Euro-US Dollar currency pair trading on EBS important electronic trading platform for traders to source forex from other traders. But that was just half the story.

First, these hindsight "shares" were unknown to the four traders: They only knew their own positions and what they could glean from so-called "market color" (essentially, market information exchanged with other traders). No data gave the traders real-time market share of EUR-USD or forex overall. And at any instant a new customer, a sudden government announcement or event, a computerized algorithm, or a hedge fund might change the picture in less than a second. Forex is unpredictable and turns on a dime.

Second, substantial sums of forex was also traded outside of EBS. As the government's expert David DeRosa testified, trading volume during the time period at issue in the forex market was $1-2 trillion per day.[8] Trial testimony established that forex can be traded anywhere; two consenting individuals could, in fact, walk right outside the courthouse and trade forex on the sidewalk.[9] In other words, EBS was an important trading platform but not the only platform.

Chatrooms were widely used by all market participants as marketplaces. EBS share is not market share. The defense team established these points largely through the government's own expert, whose cross-examination lasted nearly four hours after a 1.5-hour direct examination.

Moreover, forex traders who traded one currency pair — such as the three EUR-USD traders on trial — were necessarily only a small portion of the market. The government's witness Dr. David DeRosa testified on cross that computerized trading entities can bypass direct EUR-USD exchange and use a third currency, such as British pounds or Japanese yen, in a process called triangular arbitrage:

Q. And [computerized trading entities] use what's called a computer algorithm to guide their trading, correct?

Q. Could you explain to the jury what a computer algorithm is in foreign exchange trading?

The three traders were human traders in an increasingly computerized, global, liquid overall market. The defendants operated in one currency pair, EUR-USD, that according to Dr. DeRosa represented only a portion of the overall $1-2 trillion-a-day market:

A. Well, as you may have heard ... the market for foreign exchange is simply enormous. It's probably the largest market. Now, in the timeframe that we're asked to look at, there was roughly, according to the bank for international settlements, between one and two trillion dollars a day in spot trading. It really is huge. It's astounding. The estimates that we have from these central bank surveys is that the Eurodollar was about 25 percent. So that means that eurodollar was trading let's say roughly between $250 billion and $500 billion a day.[10]

Due to triangular arbitrage and the split-second computerized trading, the chartroom traders' activities had to be viewed across all forex currency pairs, not simply the EUR-USD currency pair. Even a position as high as a $1 billion position (rare) when measured against a $2 trillion daily dollar forex market is only 0.05% market share.

Finally, the trial record made it clear that customers of forex had numerous banking relationships and could turn to a number of banks for their forex transactions in the interbank market. Government witness Dan Bienvenue from the California Public Employees' Retirement System described using 30 different banks as forex counterparties, including nine different banks on a given day.[11]

Myth 4: The traders knew how to affect foreign exchange rates at the fixes.

The two key benchmark forex rates, the WM/Reuters and the ECB "fixes," are controlled by independent entities with an undisclosed formula for formulating the rates. The ECB sets its rate subjectively with no publicly revealed methodology and has not disclosed it even to academics who work in the field.[12]

The WM/Reuters 4:00 p.m. (London time) fix uses a complex methodology that its head of benchmarks, Shirley Barrow, has discussed in general terms around the world — including with the U.S. Department of Justice. Barrow has said the methodology is remarkably complex and, in practical terms, unbreakable under the conduct indicted in the Usher case — a complex sampling of 61 seconds on an unweighted basis.[13]

The government chose to wall its witnesses off from the division's interview of Barrow[14] and presented no evidence of the precise mechanism as to how the rates are set. If none of the traders knew how the rate is set, how could they manipulate it (particularly where the methodology was deliberately opaque and proprietary)?

Myth 5: The traders thought they were coordinating their trading.

The government's star cooperating witness, Matthew Gardiner, a London chatroom participant, gave two days of direct testimony. But it only took him a few minutes on cross examination to acknowledge that he only came to believe he was illegally coordinating after his cooperation with the government began.[15]

In fact, it was not until after over a dozen in-person meetings or attorney proffers with the government, and an immunity offer, that Gardiner "realized" he had been coordinating illegally. In other words, he did not believe he was coordinating at the time he was supposedly coordinating.

Rather, the evidence showed that Gardiner and the others, with the banks' knowledge and approval, exchanged so-called "market color" — essentially, market information — in the chatrooms. An information exchange even of price specifically does not constitute a per se antitrust violation.[16] Like government expert Dr. DeRosa, Gardiner acknowledged that the traders viewed each other as counterparties who shared information.[17]

At times, the information the traders exchanged was not even reliable. Gardiner acknowledged that when exchanging market color the traders would often hold some information back for their own benefit, a practice he referred to as "fix poker":

Q. Would you agree with me fix poker was a practice among foreign exchange traders, that they give some information, but they'd always hold back a little; correct?

A. I think it was used like that.I think it's a fair reflection of that, yes.

Q. [Y]ou thought part of the agreement was open and honest communication that would help people coordinate their trading. Correct?

Q. But if the people are playing fix poker like everybody else in the business is, that would be contrary to what you were thinking was the agreement or understanding.Correct?

The fix poker concept demonstrated that the traders were often gaming one another, not teaming up to game the market.

Myth 6: The Usher case was somehow a fraud case.

The Usher trial followed closely on the heels of several prominent fraud cases arising out of the forex investigations, and many assumed this was another. Indeed, the government billed this prosecution as an issue of "corporate fraud" in announcing the indictment. Usher was not a fraud case. Fraud was not even charged.

Moreover, the central conduct was traders' exchange of useful information in chatrooms, which the evidence showed customers desired and encouraged. The government adduced no proof of fraud. No one was duped by the conduct.

The jury verdict busted an even more fundamental myth.

After sitting through more than two weeks of trial, the jury took only five hours to deliberate and find the three traders innocent of all charges. The quick work of the jury may have busted an even more fundamental myth: that defendants cannot win complex financial cases against the government. The jury saw past the flashy headlines to the serious legal and factual problems with the government's case and delivered, loudly and clearly, the right verdict. 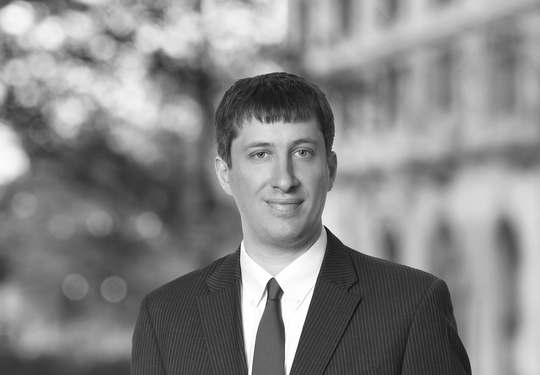