An almost 25 per cent drop in European M&A deal value to €642 billion in 2019 on the previous year, according to Mergermarket data, saw leveraged loan issuance for buyouts (LBOs, MBOs and SBOs) and corporate M&A slide during the year.

Proceeds used for M&A (excluding buyouts) were more or less level with 2018 at €36.7 billion. The fall in buyout issuance, however, was pronounced, down more than 30 per cent to €38.7 billion on figures for 2018. The drop in headline M&A activity has seen a shift in leveraged loan issuance patterns towards refinancing and repricing, which accounted for an increasing share of issuance through 2019. Issuance for repricing and refinancing was just 3 per cent lower than 2018 at €94 billion and remained substantially higher than issuance figures for buyouts and general M&A.

A focus on repricing

The fact that M&A was down in 2019 did not stop leveraged loan investors from looking for ways to deploy capital. The situation created opportunities for borrowers to return to the market and refinance or reprice loans.

Leveraged loan investor demand has been a major driver of activity for repricing and refinancing activity. CLOs, for example, raised €30.1 billion in new capital from investors during the year, according to Creditflux data, which is up on the €27.2 billion secured in 2018.

With leveraged loan investors actively looking for ways to invest their capital, their appetite for repricing has been strong. Repricing occurs when loans come out of their call periods and the market is there to support them. Given the significant demand from leveraged investors, borrowers can refinance an existing tranche with cheaper debt on the same terms with the same quantum of finance.

Similar dynamics are at play with respect to refinancing, with borrowers taking the opportunity to refinance in a hot market and extend loan maturities, and potentially take advantage to refinance on more favourable terms.

Borrowers have also noted the opportunity to push out maturity walls on loans, or taken the view that the benign market will allow them to secure looser terms and provide more flexibility.

With investors eager to deploy, borrowers can refinance relatively painlessly. This is more straightforward than trying to renegotiate terms on an existing tranche, which may require the consent of all affected lenders. 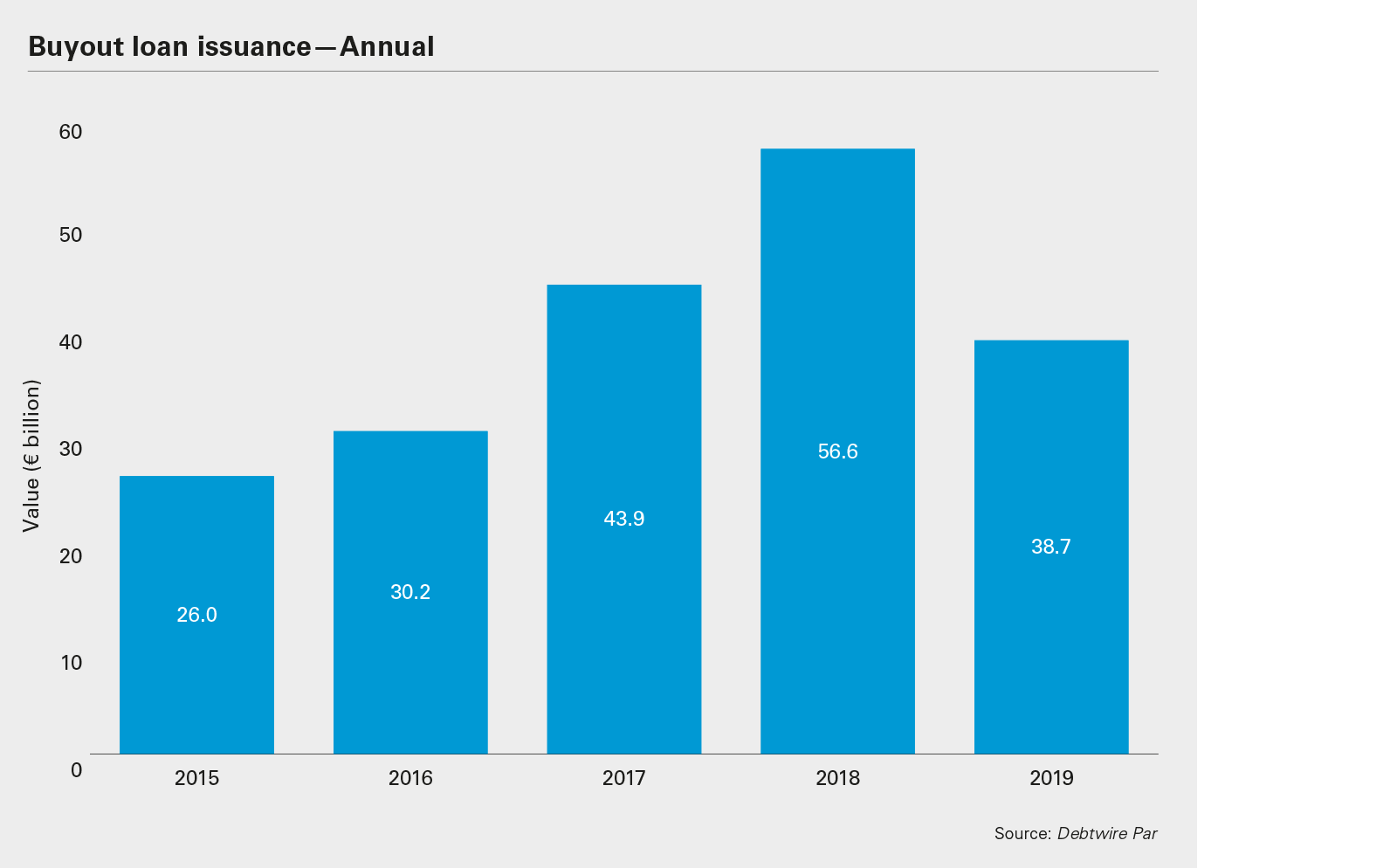 Looking ahead, there are hopes that a revival of European M&A activity, prompted by a clearer direction of travel on Brexit and less volatility around global trade, will support a corresponding rise in leveraged loan issuance

The future for LBOs

Looking ahead, there are hopes that a revival of European M&A activity, prompted by a clearer direction of travel on Brexit and less volatility around global trade, will support a corresponding rise in leveraged loan issuance. Default rates remain in the 1 per cent to 2 per cent range and, with interest rates unlikely to rise, there is still demand for leveraged loan paper.

European markets were dominated by Brexit in 2019. The first quarter was quiet and, although things started to move again in the middle of the year, borrowers and lenders remained cautious. Although Brexit was viewed as a UK issue, the EU was just as invested. Many of the CLOs, investors and pan-European firms sit in London and would have felt the effect of negative Brexit sentiment.

With the general election at the end of 2019 returning a majority government committed to leaving the EU, there is less uncertainty in the market, and the immediate risk of a no-deal cliff edge has receded in the short term. It is hoped that this will allow for a return to business as normal, a revival of M&A and a consequent rise in leveraged loan issuance. 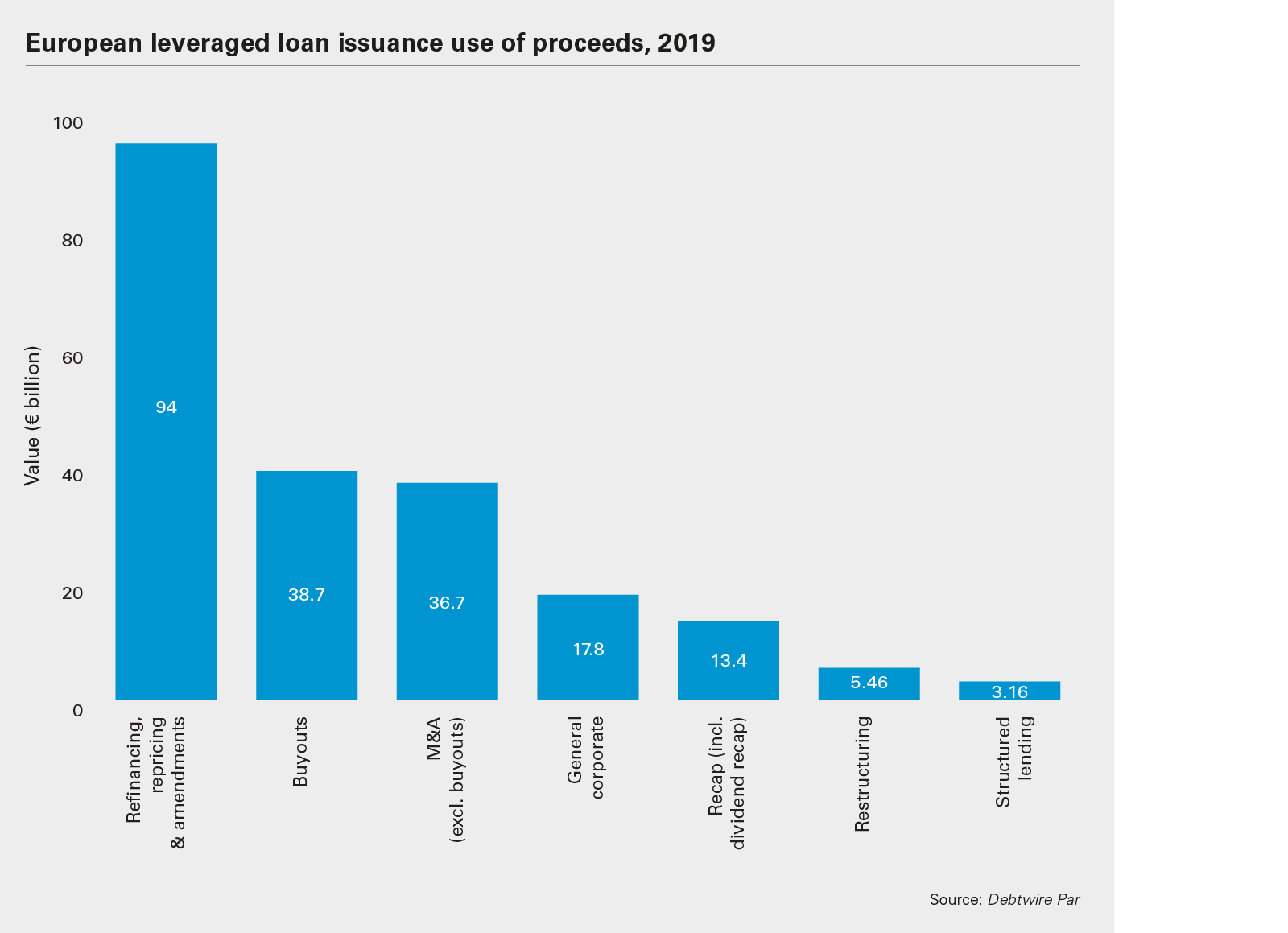 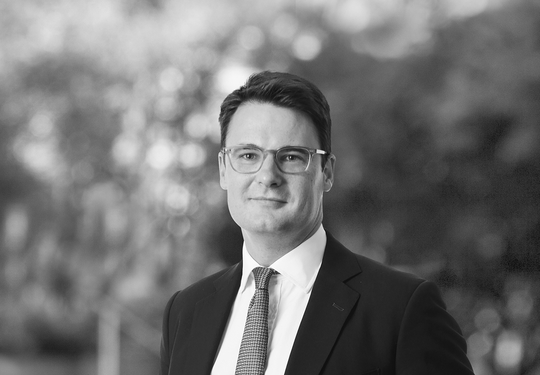