How market design, regulation and financing will shape the future of offshore wind

Offshore wind is poised for significant growth in the US. Advances in technology and other areas have brought costs down, and there are many lessons to be learned from Europe that will make US deployment easier than ever before. Moreover, the Interior, Energy and Commerce Departments announced a shared goal to deploy at least 30 gigawatts (GWs) of offshore wind in the US by 2030. Federal agencies and state governments are increasingly taking action to support offshore wind, and investors are increasingly interested in the space.

Transmission is one of the most important areas for development in coming years. To capture the opportunity, the US must design effective transmission networks that connect offshore farms and coordinate delivery of power to the grid. Regulations are evolving to support this objective, and governments and investors are innovating to develop funding mechanisms that balance risk and reward. There’s progress on almost every front, but there’s still a tremendous amount of work to do.

In this piece, we provide an overview of US offshore transmission, touching on some of the most important factors that will determine the future of offshore wind in the country: technology costs, market design, regulations, financing and stakeholder management.

The offshore wind adoption curve will follow a trajectory similar to that of solar and onshore wind in the US. As technology and processes improve across the value chain, costs will go down and developers will deploy more offshore wind supply. That is already happening in Europe. And increased capacity drives costs down further—it's a virtuous cycle.

Turbines, for example, have steadily grown bigger, outpacing the predictions and technical projections of many experts. With higher hub heights, turbines can capture wind traveling at faster speeds, enabling more efficient generation. As a result, operators need fewer turbines to generate the same amount of wind, which translates into lower capital, operating and maintenance costs. And according to a survey conducted by the science publication Nature, industry experts expect capacity factors for offshore wind turbines to increase significantly over the next decade.

Because the outer continental shelf off the east coast of the US is relatively high, most offshore wind turbines in these waters can be anchored to the ocean floor. The advent of floating wind turbines in Europe may boost project prospects in other regions of the US with deeper waters, such as the Pacific Northwest, California, Hawaii and Maine. In fact, the state of Maine, which has a ten-year moratorium on construction in state waters, is currently conducting a research project on floating offshore wind turbines. 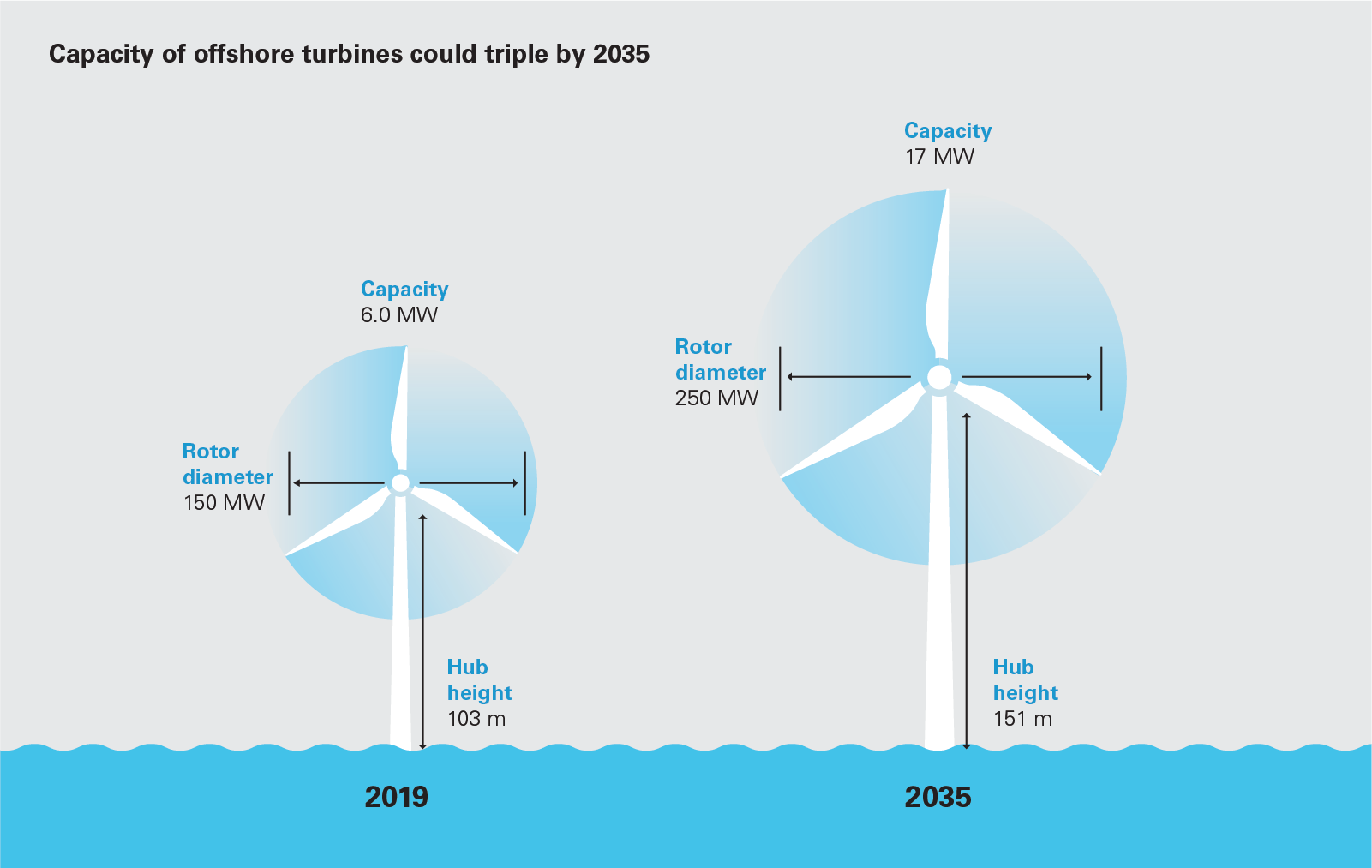 Next on the agenda: Transmission market design

Offshore wind farms are typically located 15 or more miles off the coast, and the power they generate is sent to shore through undersea cables. In the US, wind farms are usually designed as standalone projects that send power directly to shore.

In Europe, where the offshore wind sector is more mature, wind farms are typically connected by radial systems that aggregate power from offshore sources and coordinate transmission to the onshore grid. As the US ramps up its offshore wind capacity, it should similarly develop systems that aggregate power for transmission to shore. Although injections of significant amounts of aggregated offshore wind supply at specific points on onshore transmission networks will require costly network upgrades, the costs are likely to be offset by operational benefits and reductions in project development costs.

According to the US National Renewable Energy Laboratory (NREL), aggregating power can increase grid reliability, resilience and efficiency; bring project costs down "by as much as 10 to 18 percent;" and reduce the likelihood of conflicts with other offshore interests such as commercial fisheries.

With these benefits in mind, NREL launched the Offshore Wind Grid Integration project in February 2021 to conduct research on technologies and strategies that would integrate offshore wind installations into the power grid. Among other topics, NREL will conduct research on "the interplay among transmission configurations and technologies, grid integration requirements, energy storage options and other renewable energy sources."

Project developers continue to press for "backbone" solutions that would connect wind farms across large regions to help ensure the power they generate offshore will reach the grid. In the past, proponents including Google have proposed developing backbone transmission systems along the East Coast, and the idea is getting renewed attention from the new Chairman of the Federal Energy Regulatory Commission (FERC), Richard Glick.

As other renewable energy technologies reach parity and constitute higher proportions of the US generation portfolio, agencies and utilities may also explore hybrid systems where offshore wind, onshore wind and solar are all planned jointly with electric storage resources.

Innovation by states and private investors

The Brayton Point Commerce Center. In Massachusetts, a group of investors is converting the former site of a coal-fired plant into a hub, called the Brayton Point Commerce Center, which will provide manufacturing, logistics and transmission in support of offshore wind facilities. Importantly, the Center is close to new offshore wind lease areas. One developer has already announced that it will build a 1,200 MW high-voltage direct current converter and 400 MWs of battery storage on the site to entice offshore wind projects to connect with the Center.

At the federal level, the Bureau of Ocean Energy Management (BOEM) is responsible for all energy activities undertaken on the outer continental shelf, including activities related to offshore wind. FERC does not assert overlapping jurisdiction with BOEM, but it does have authority over the power markets that will eventually sell offshore wind energy.

BOEM uses a multi-phase process to authorize offshore wind development that involves assessment of activities across the lifecycle of a project, from acquiring leases and assessing possible environmental and other impacts to evaluating and approving plans for construction, operations and eventual decommissioning. For a detailed overview of the BOEM permitting process, see the article "Environmental laws and regulations affecting US offshore wind."

In addition to the steps undertaken through the federal permitting process, offshore wind developers must also obtain permits from the relevant states. To build transmission lines in their waters and connect to their onshore grids, states require developers to have a valid BOEM lease (once a lease is obtained from BOEM, remaining state and federal processes typically proceed concurrently). Usually, a state or its utilities will issue a request for proposals to procure capacity from planned offshore wind farms, leading to power purchase agreements between selected developers and participating utilities.

In recent years, BOEM has clarified the leasing and permitting process it administers through the Renewable Energy Program, making it easier for developers to navigate. BOEM will likely seek increased funding and staffing to accommodate an influx of new project applications and manage the various tasks associated with reviewing proposed sites. This will be critical to the sector’s ability to meet the Biden administration’s 2030 goals, which aim for a thousand-fold increase in offshore wind capacity compared to 2020 levels.

Given the significant development costs of offshore transmission, the sector will need access to new funding mechanisms or incentives to support the planning, development and construction of offshore transmission capacity that will enable states and the Biden administration to meet their ambitious renewable goals. We highlight three promising approaches to financing offshore wind below. See also the article "Financing US offshore wind" for more details on financing offshore development.

In 2021, the PJM regional transmission organization launched its State Agreement Approach (SAA), an innovative mechanism for planning and funding development of offshore transmission infrastructure that is designed to help states in the region achieve their renewables goals. The SAA eschews customary planning processes in favor of state-commissioned planning studies to identify infrastructure that is needed to integrate large amounts of offshore wind supply. It allows companies to submit proposals to compete for projects identified through this process. And importantly, it enables states to fund transmission projects that may not otherwise attract the required investment from merchant transmission developers or qualify for system-wide cost allocation. The New Jersey legislature already voted to coordinate with PJM, and it is poised to be the first state to use SAA to optimize its efforts to develop offshore wind infrastructure.

The Biden administration announced that it will make US$5 billion in loan guarantees available to support innovative transmission projects, including offshore wind projects, through the Department of Energy's Loan Programs Office. The availability of low-cost government loans should result in a material reduction in the cost of debt for transmission projects, improving the risk-reward calculus for project developers.

Developers may still face significant opposition to offshore wind projects, especially on economic and aesthetic grounds. In Massachusetts, the commercial fishing industry has vigorously argued against Vineyard Wind, citing potential adverse effects to the stock of fisheries and, consequently, trickle-down economic impacts to nearby communities.

Recent developments may make it more difficult for fishermen to prevail in their opposition. In 2021, the Department of the Interior (DOI) reversed a legal opinion by the prior administration, which had emphasized "reasonable uses" of exclusive economic zones and prioritized economic activity such as fishing over new energy projects. In an April memo, the Principal Deputy Solicitor of the DOI retracted the prior mandate and concluded that a "rational balance" of all enumerated goals should be pursued. Renewable energy is not precluded outright due to its possible contributions to environmental protection and waste prevention, two of the goals under DOI purview.

In most proposed new projects, turbines would be located far enough offshore that they would not be visible on land. But that doesn't mean stakeholders won’t object to projects on aesthetic and related economic grounds, as they did so successfully in the case of Cape Wind.

Along the New York coast, wealthy landowners in the Hamptons are concerned about transmission infrastructure proposed for the South Fork Wind Farm. Their opposition pertains to the construction and installation of underground cables, which are not exclusive to offshore wind but may be required by any new power project. It will be interesting to see how contentious this sort of opposition becomes and how developers and regulators find common ground with local residents and community stakeholders. Fortunately, opposition to the South Fork project pales in comparison to Cape Wind, which generated a combined 32 court cases and administrative hearings over the course of a protracted regulatory process.

The future of US offshore wind is bright. But it depends on the ability of participants—from project developers and investors to regulators and other stakeholders—to cooperate to build an ecosystem that rewards development of integrated systems and ensures reliability and resilience. 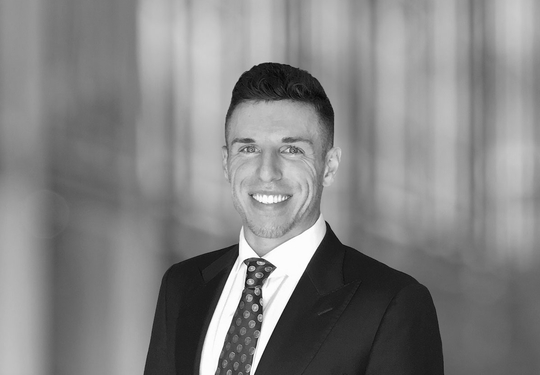