The public back-and-forth exchange between activist New York hedge fund Elliott Management and BHP Billiton that started in April 2017 has set off alarm bells at all major mining companies.

The dispute is undoubtedly the highest-profile public manifestation of myriad private conversations management teams are having with big investors around the globe.

As the miners continue on their rapid recovery path from the commodity price downturn of 2014-2016, exiting a period of deleveraging and cost-cutting into an environment conducive once again to stellar profit generation, big investors are monitoring their progress closely.

With huge amounts of free cash tipped to be generated once again by the industry in the coming years, some investors appear concerned that the perceived sins of the past—value-destructive M&A and over-investment in new projects to name just two—may return again.

Elliott's recent critique of BHP's strategy shows that investors are acutely focused on unlocking any trapped value inside mining companies that may be perceived to be running 'lazy' balance sheets. 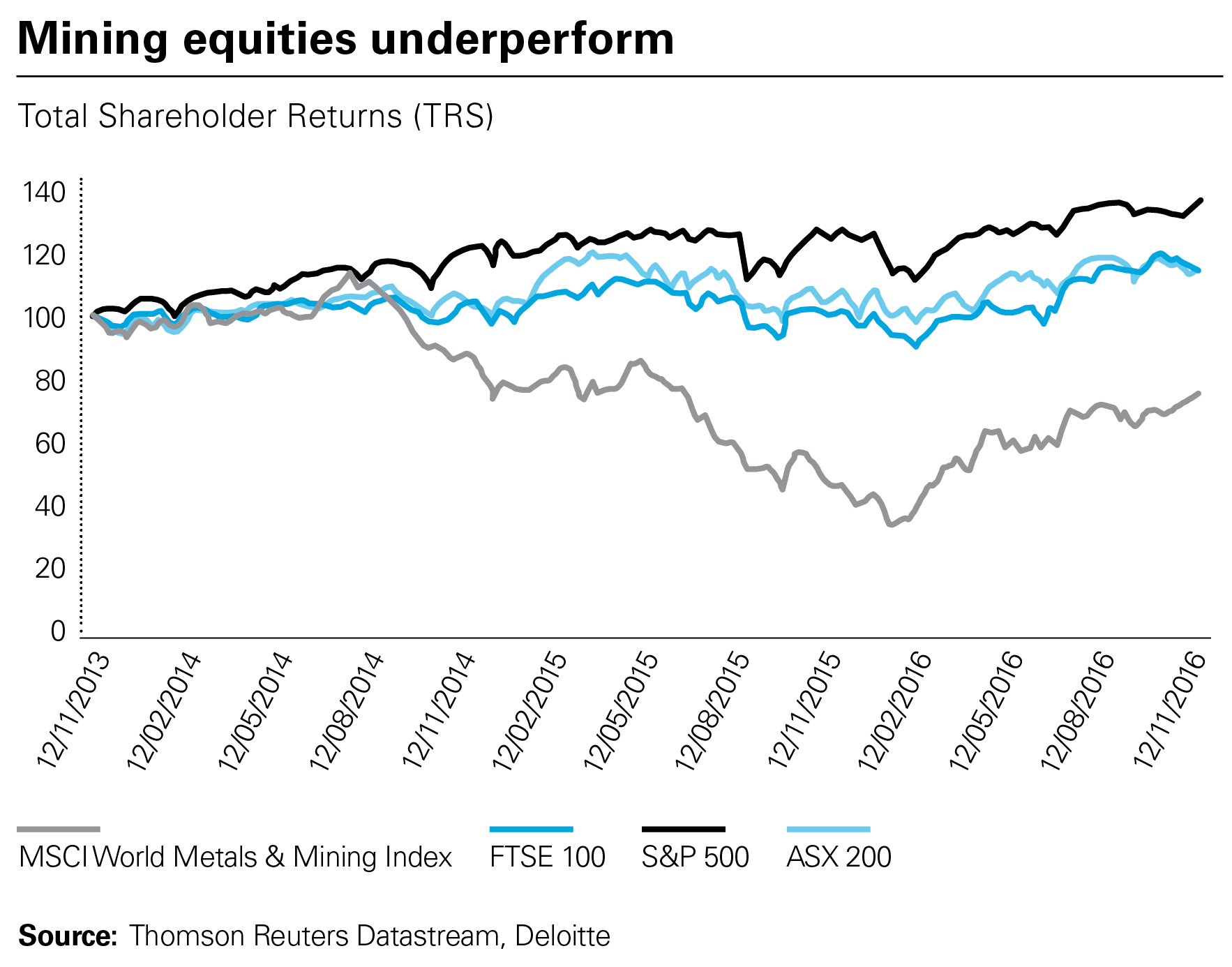 The centrepiece of Elliott's suggested overhaul was the oft-repeated view that the company's US oil & gas business, valued at US$22 billion by Elliott, would attract a higher valuation if it was separated from BHP's world-leading mining business.

Elliott, which has a strong track record of successfully campaigning for major strategy overhauls at some of the biggest companies across a range of sectors, has called on BHP to IPO a significant chunk of its energy business and list it on the New York Stock Exchange.

These proposals have been an unwanted distraction for BHP CEO Andrew Mackenzie and management, who have launched an investor roadshow to try and quell the disquiet which has spread to at least one other shareholder.

But the attention appears to have prompted BHP to soften its position on retaining its shale gas assets in the United States. Mackenzie revealed in May 2017 that the company would be willing to sell its shale portfolio if a bidder was to offer the right price.

The recent experience of Klaus Kleinfeld, CEO of another Elliott target, Arconic, and former chief of Alcoa, also serves as a reminder of how an extended activist dispute can sour.

Kleinfeld, whom Elliott had demanded be removed from the company, was forced to resign in April after it was discovered that Kleinfeld had sent a threatening letter to Elliott head Paul Singer.

For BHP, the distraction risks turning into a strategic dilemma if Elliott can galvanise support from a broader base of investors. And for the industry, activism is something the market may see more of.

Combined debt of Anglo American, BHP Billiton, Glencore and Rio Tinto at its peak in 2013

In the UK, Anglo American has encountered a perhaps more friendly style of investor in billionaire Indian tycoon Anil Agarwal, who arrived on the share register in April with an 11.44 per cent stake.

Agarwal, founder of Indian giant Vedanta Resources, has sought to distance himself from an activist agenda as he acquired his US$2.5 billion holding in the near-US$20 billion Anglo American.

In the US, a country more familiar with the actions of major activist investors, giant copper miner Freeport McMoran saw high-profile activist Carl Icahn enter its register in late 2015. The billionaire campaigned for a strategic review and, like Elliott, lobbied for Freeport to divest its oil & gas business.

While still a shareholder, Icahn has become a more passive investor in recent months, applauding Freeport McMoran management's strategy shift toward deleveraging and its commitment to being open to offers for all or parts of the company.

Capital allocation strategies are in the spotlight. Investors want more of the spoils from the new leaner, more cash generative mining businesses

So, what should management teams be doing if they want to avoid a high-profile tussle with an activist investor?

Capital allocation strategies are in the spotlight, and investors want more of the spoils from the new, leaner, more cash-generative mining businesses that have emerged from the crisis of the past few years.

According to our 2017 Mining & Metals Survey, debt reduction was identified as the top priority in terms of capital management this year by 44 per cent of respondents, while an approach of 'do nothing/steady the ship' was the second-highest response at 21 per cent. Dividends figured in fourth place with 12 per cent. None of the respondents advocated for radical measures.

Last year's shift by majors like BHP and Rio Tinto to adopt a pay-out ratio rather than maintain their progressive dividend policies—clearly no longer suitable for such a cyclical industry—may have proved a catalyst for activist investors to mount a response.

As well as calling for the unwinding of BHP's dual-listed structure that sees shares traded in both Australia and the UK, Elliott argued for US$33 billion to be returned to BHP investors in the form of share buybacks over a five-year period.

Mackenzie and BHP CFO Peter Beaven argued that the company had emerged from the recent downturn a stronger and leaner entity, thanks in part to the more sustainable dividend policy adopted during the downturn. BHP said that Elliott's US$33 billion buyback proposal, if adopted from 2012, would have put the company's net debt position at double what it is today, leaving the balance sheet in a precarious position.

The critique offered by Elliott highlights the delicate balancing act management teams undertake in weighing the demands from competing interests among their shareholders—those that are pushing for quick returns as the sector picks up and those that value investment in low-risk growth options to help underpin steady returns over the longer term.

Further down the list of both the publicly stated capital allocation priorities of major mining companies, as well as the results of our survey, is M&A—which scored the lowest at just nine per cent of respondents.

While some investors are still weary of aggressive deal-making in the sector, with the overpriced deals done at the top of the commodity price boom still fresh in memory, there's no doubt that other shareholders want management teams to be thinking about growth again.

Acquisitions in copper (identified in our Metals & Mining Survey as the hot commodity of 2017) would clearly be the most palatable for investors. The attractive fundamentals for copper that's expected to see the market in deficit by next year are well understood, and copper is also a commodity that has been earmarked by most of the top miners as a priority for growth.

This raises the spectre of the hostile or semi-hostile M&A, typically the hallmark of the start of a period of consolidation in the industry.

Rio Tinto has the strongest balance sheet in the sector, and along with bolstering returns to shareholders, M&A is likely to be high on its management's radar.

The company recently launched a new 'Ventures' arm, which will focus on what Rio calls 'Megatrends,' or on new and emerging commodities. Rio said in February this would likely lead to new commercial partnerships.

In February, Rio Tinto CEO Jean-Sebastien Jacques said that there were four or five world-class copper assets that the company coveted and had on its 'Christmas list.'

Still, he made it clear that given the rebound in commodity prices and balance sheet repair across the sector, sellers were no longer distressed and any sales processes would be highly competitive.

Rivals BHP and Anglo American have also publicly stated that copper (along with oil for BHP, and diamonds and platinum for Anglo) is a preferred area for expansion. Glencore meanwhile recently spent almost US$1 billion to increase its ownership of two copper and cobalt mines in the Democratic Republic of Congo.

This has put many management teams in something of a bind. There is an appetite for growth, but the window for bargains, especially for tier-one assets, seems to have passed, and investors are acutely aware of the overpriced deals from years past and have cautioned the miners against repeating those mistakes.

At the same time, the arrival of Agarwal as a major shareholder in Anglo (via an innovative investment structure—a mandatory exchangeable bond was issued by a company owned by his family trust), long seen as a target for its larger mining peers, has put M&A firmly on the radar. The company holds some of the most attractive copper projects in the world, as well as the leading diamond and platinum mines.

Through the recent commodity and mining crisis, management teams made many promises about the lessons learned and how they would rebuild a business that would deliver for shareholders in the future. They're now under intense scrutiny as they set about delivering on those promises.

Shareholders are demanding both improved returns and disciplined growth. If shareholders don't believe management is delivering, they will take action themselves. There's no such thing as business as usual for the mining and metals sector.