The industry has continued to close both big-ticket buyouts and exits. The Carlyle Group and Hellman & Friedman sold Pharmaceutical Product Development to sovereign wealth funds GIC and ADIA for US$9 billion in the largest exit of the year so far. JAB Holdings has made the biggest buyout to date, acquiring Panera Bread Company for US$7.4 billion from BDT Capital Partners.

"The simple fact is that if sponsors don't do deals, they fade away," says White & Case partner Oliver Brahmst. "They are continuously hunting for transactions, and they are very inventive about finding opportunities."

New York–based American Industrial Partners, for example, carried out a cross-border delisting of Canadian family-controlled manufacturer Canam. These kinds of complex deals show how firms are looking at deals from different angles in order to deploy their cash.

Buying in a seller's market

While deal figures have held steady, PE firms are under pressure to deploy capital in a market that has favored sellers in recent years. According to research group Preqin, buyout firms have a record US$842 billion of dry powder to deploy, yet exit value was a quarter higher than buyout value in the first six months of 2017.

"Funds continue to pay higher and higher multiples of EBITDA as purchase price," says White & Case partner Carolyn Vardi. "There is an obvious tension between sellers exerting their power in the market and PE buyers executing on deploying capital, but doing so responsibly." 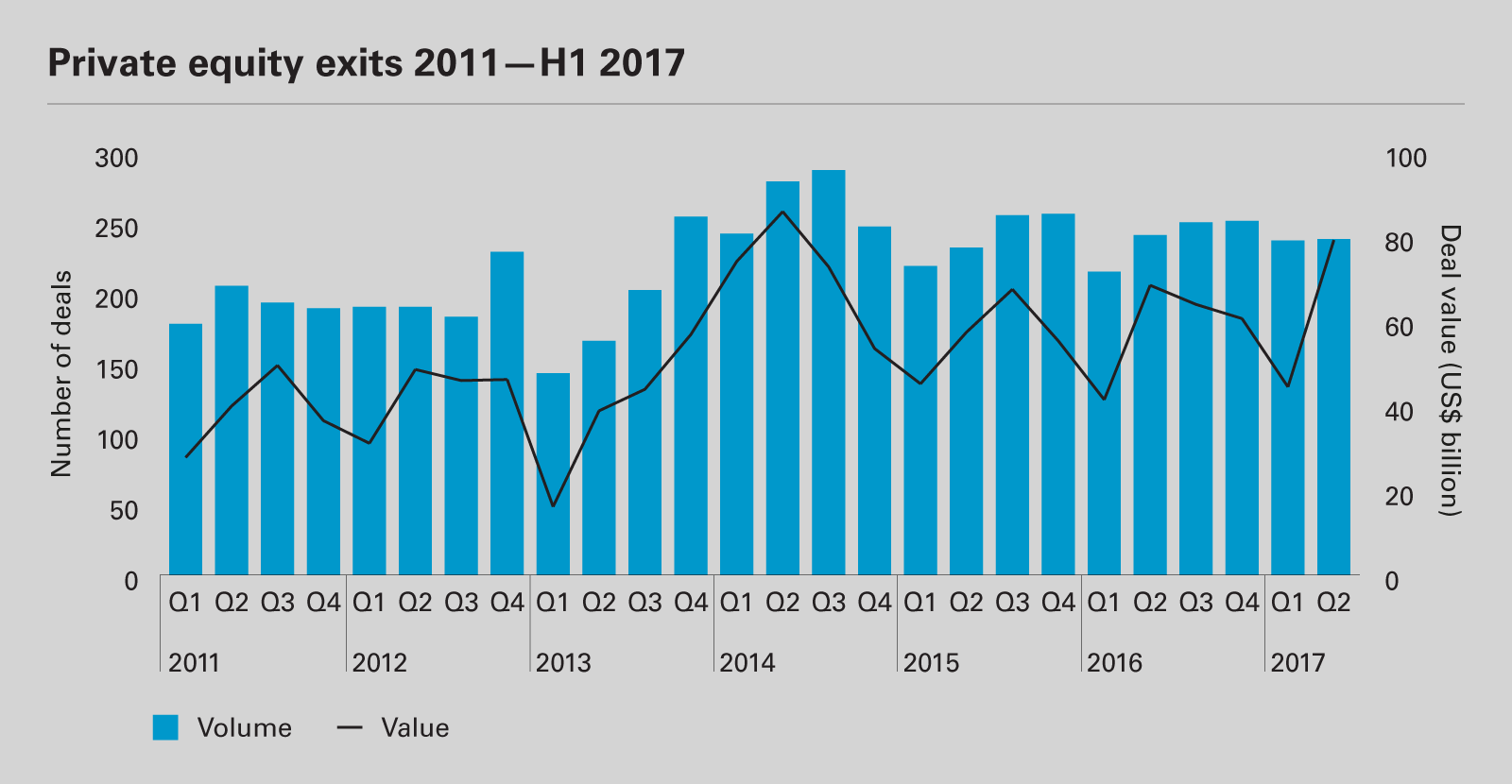 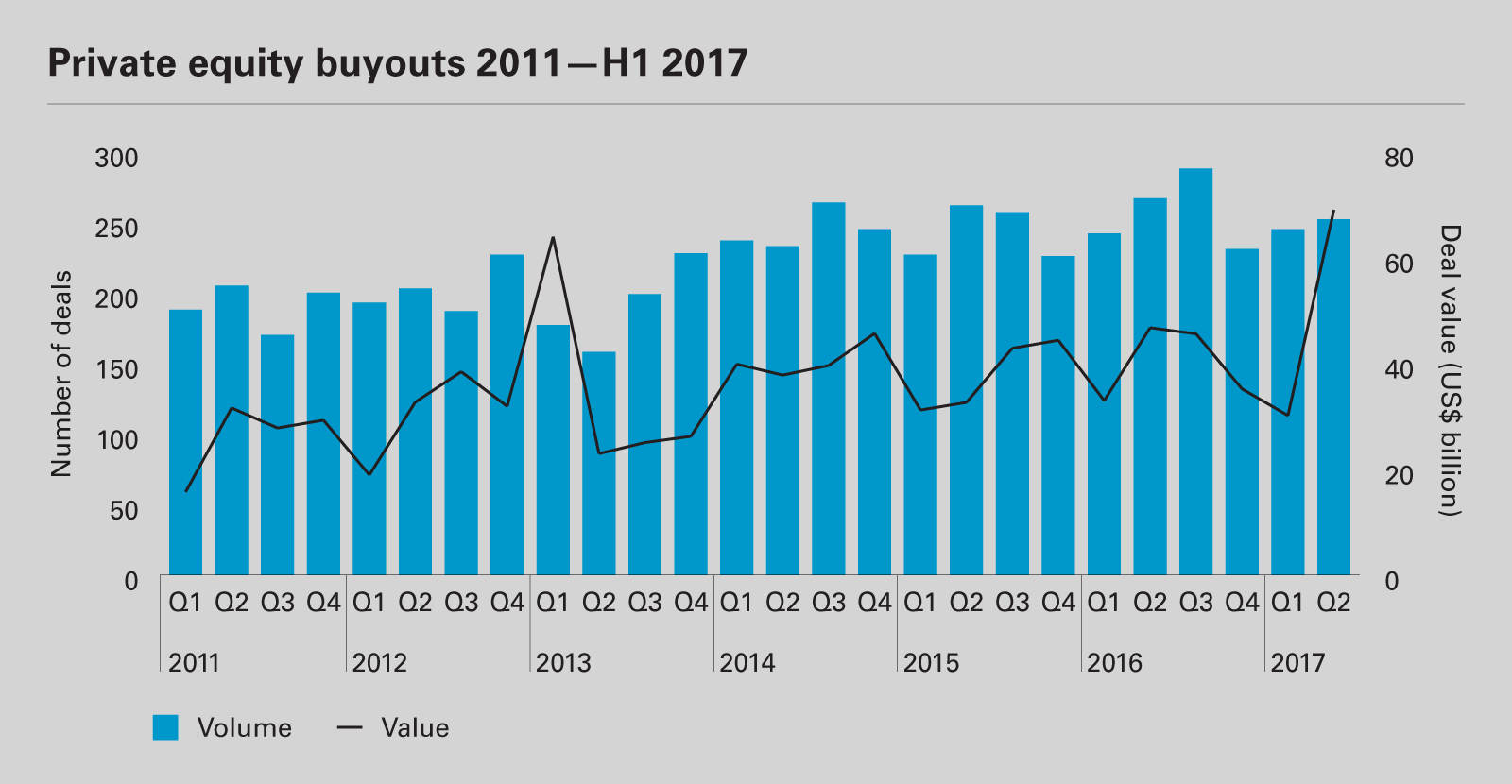 Firms are making acquisitions through portfolio companies so they can in fact act like strategic players.

In response, firms are working harder to gain an edge and find new ways to put money to work, with PE firms investing through different structures in order to access more dealflow. Firms are no longer wedded to doing control investments, and will take minority stakes, hold assets for longer or offer larger amounts of co-investment opportunities to their investors.

Highlighting this trend, The Carlyle Group, Blackstone and CVC Capital Partners have all raised long-dated private equity vehicles, which have fund lives of 15 years and beyond as opposed to the standard 10-year terms.

According to Brahmst, buy-and-build strategies have also become particularly widespread in the asset class, which means that deal figures may not reveal the true level of PE activity. "Nobody should discount the fact that firms are making acquisitions through portfolio companies so they can in fact act like strategic players," he says.

Audax, for example, more than quadrupled the revenues of Florida- and Ohio-focused portfolio company Advanced Dermatology & Cosmetic Surgery to more than US$200 million after building the business into a national platform through 40 add-on acquisitions. 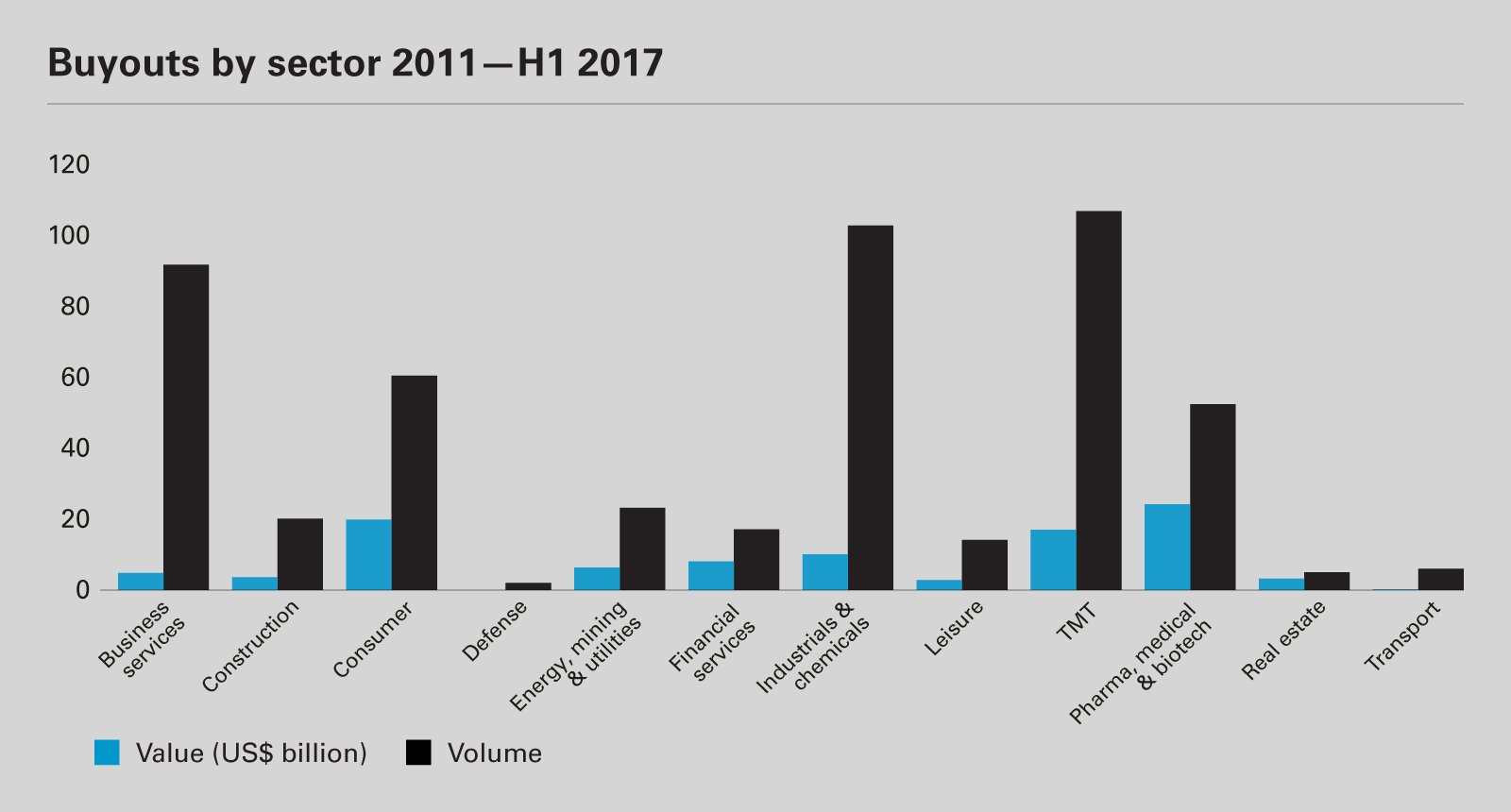 Attempts to pre-empt an auction process are almost a standard tactic now, and firms are trying to avoid this situation by leveraging relationships with management teams to try and get a look at a company before it's put up for sale.

Competition from strategic bidders is still ever-present, with the most recent analysis from Moody's estimating that non-financial companies in the US are sitting on cash holdings of US$1.7 trillion. Vardi says this has pushed firms to leverage relationships before ever reaching the auction stage.

"Attempts to pre-empt an auction process are almost a standard tactic now, and firms are trying to avoid auctions by leveraging relationships with management teams and sellers to try and get a look at a company before it's put up for sale," Vardi says.

Where PE funds do have the upper hand over corporations is their likelihood to accept seller-favorable terms. "While corporates may have a balance sheet to back up their objectives and more synergistic advantages, I've seen them trip up over some of the terms that the sellers are demanding," Vardi says.

According to Brahmst, it is the ability to remain agile that can help PE firms stay ahead. "They can solve problems quicker or risk-assess problems to make decisions quicker. Sometimes, that gets them to the finish line faster than a corporate," Brahmst says.