On March 11, 2022, a reform to the Mexican Banking Law (Ley de Instituciones de Crédito) was published in the Federal Official Gazette (Diario Oficial de la Federación) in order to provide a new procedure for the defense of both individuals and legal entities against inclusion into the Blocked Persons List.

As per Article 115, ninth paragraph, of the Mexican Banking Law, banks operating in the country shall suspend immediately the operations, accounts, contracts or services executed with, or provided to, any person (either natural or legal) who is included on the Blocked Persons List (Lista de Personas Bloqueadas, or the "List").

The List is issued by the Mexican Ministry of Finance and, particularly, the Ministry's Financial Intelligence Unit, the governmental agency in charge of analyzing information to prevent and combat money laundering or terrorist financing (the "ML/FT").

The Ministry of Finance makes the List available to banks and financial entities, which must keep it confidential from the general public.

According to the AML Banking Rules (Disposiciones de Carácter General a que se refiere el artículo 115 de la Ley de Instituciones de Crédito), the List shall include persons from whom there are enough elements to indicate they may be involved in ML/FT, such as those:

The new defense procedure against inclusion in the List

Defense procedure in terms of amendments to the Mexican Banking Law, published on March 11, 2022 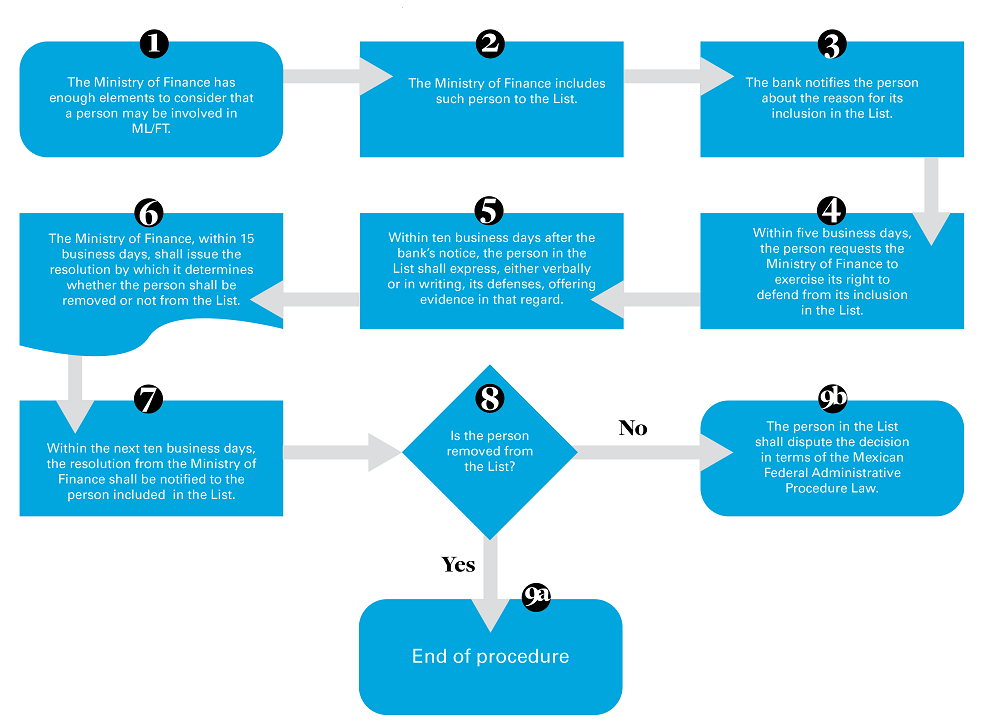 Please note that the timeframe indicated in step number five, above, may be extended by the Ministry of Finance (either unilaterally, or as per request of the person included in the List) for ten additional business days, at most.

In the previous defense mechanism established in the AML Banking Rules, such period could only be extended as per request of the aforementioned person.

Considering that the List also applies to other types of financial entities (e.g., fund managers, broker-dealers, insurance companies, Fintech entities, etc.), in order to preserve legal certainty, we foresee these amendments will be adopted in the rest of financial legislations relating to financial services and operations in Mexico.