When COVID-19 closed the IPO window at the start of last year, expectations were bleak. But the market fought back and 2020 ended on a high

The impacts of the pandemic were inescapable, but the global IPO market registered significant successes during 2020, ending the year on a high

With much of the world in lockdown, COVID-19 inevitably depressed the global IPO market during the first half of last year. But while both the number and value of listings declined, 2020 was anything but a write-off for new issues, as the second half of the year saw a significant pick-up. A record-breaking year for the special purpose acquisition company (SPAC) market also provided a boost.

Certainly, IPOs slowed to a trickle at times during H1 2020, notably at the height of the pandemic's first wave in Western Europe and North America in early spring. A year that began with promise—IPO activity was robust in January and February—was derailed by a black swan event.

However, certain sectors proved resilient. Technology, media and telecoms businesses, largely immune from the impacts of COVID-19, or even boosted by the pandemic, continued to come to market. The pharma, medical and biotech sector—at the center of the battle against the virus—also performed strongly.

Moreover, even businesses facing difficult market conditions proved that IPOs of attractive companies would continue to win support, and could be executed through the innovative use of technology. The listing of the coffee group JDE Peet's, managed through a three-day virtual roadshow, was a case in point.

This report, which features exclusive data provided by Mergermarket, considers the performance of the global market in 2020, highlighting key regions and trends. It also looks to the year ahead, finding real reasons for optimism, despite the ongoing impacts of COVID-19.

IPO activity ground to a halt following the outbreak of the pandemic, but activity in the second half of the year more than made up for the downturn

As the pandemic continues to overshadow financial markets and the global economy, the following factors will have a major impact on the IPO market in 2021

The story of Latin American IPO activity in 2020 is similar to the global narrative—just far more pronounced and focused almost exclusively on one country.

The end of 2019 gave rise to real optimism in the Latin American and the Caribbean market for 2020. And January and February did not disappoint, with four new listings raising US$824 million. This included the public offering of Brazilian construction company Moura Dubeux, which raised US$289 million and was the second-biggest transaction in the region in H1.

However, thereafter, IPO activity almost ground to a complete halt, as the global scale of the pandemic became apparent and cases emerged across Latin America. The market had to wait until May for the next listing, when Brazilian parking garage provider Allpark raised US$63.5 million. This was followed by June's listing of Cayman Islands-domiciled Chinese logistics business Dada Nexus, which raised US$320 million and valued the company at US$3.6 billion.

In value terms, however, deal activity slipped by historical comparisons. Latin American IPOs raised a total of just US$1.2 billion, down 51 percent compared to 2019, and the lowest figure since 2016. 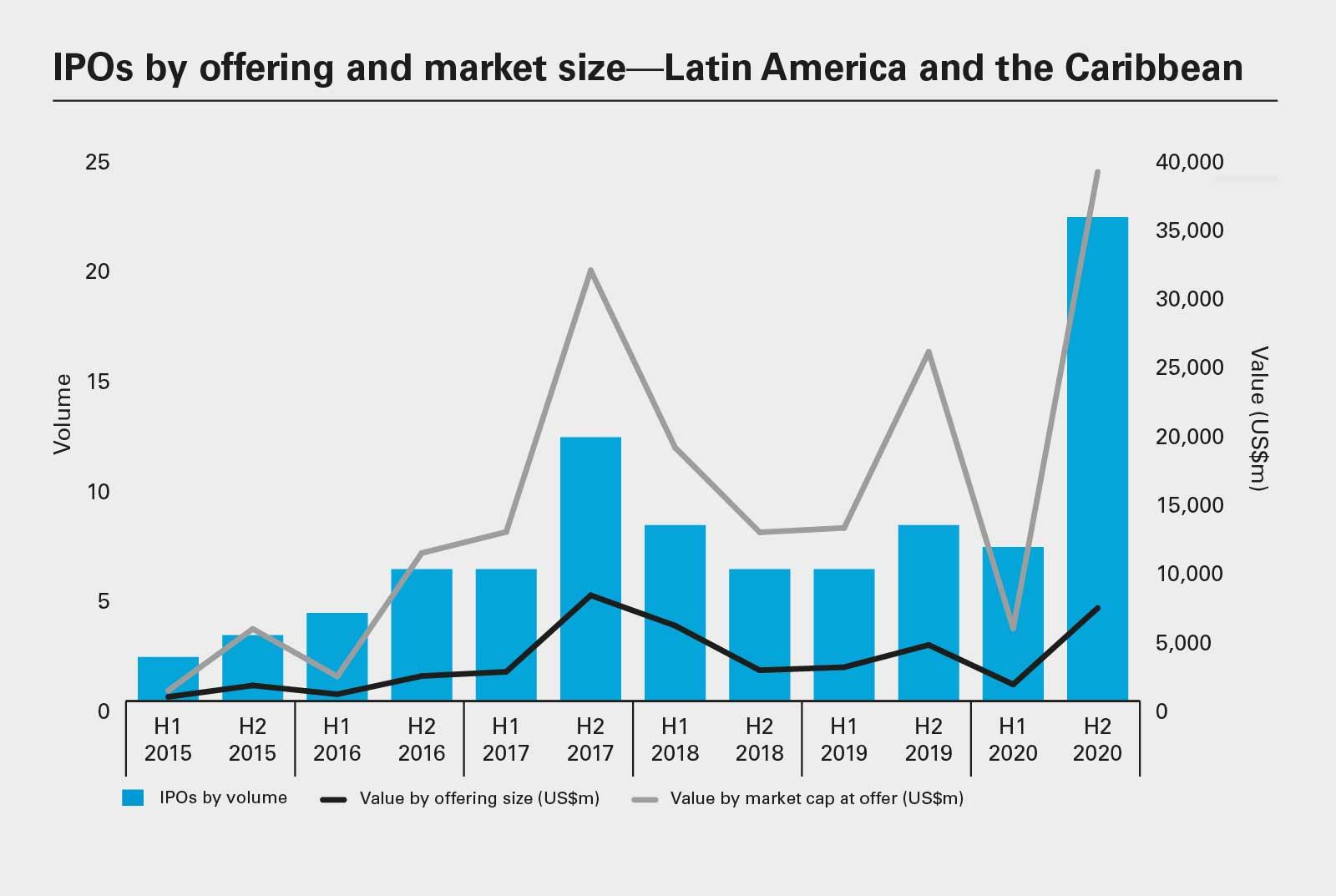 One of the keys to keeping the market open in the latter part of H1 was innovative thinking around the IPO process—which had to change in light of the pandemic. The traditional roadshow, in which executives and their banking advisors meet face-to-face, had to be replaced by a virtual approach.

Brazilian car park operator Estapar showed the way with its online IPO in May last year. The company carried out its entire book-building process through video conferencing, with its successful listing proving this approach is possible.

This type of innovative approach, coupled with strong investor demand for a series of new issues, led to unprecedented demand in the second half of the year.

Between early summer and late December 2020, there were 22 IPOs which raised a total of US$6.8 billion—by some distance the biggest half-year in the region since 2015, according to Dealogic.

Activity was centered very much around the region's largest economy, Brazil—and on its burgeoning consumer sector. Indeed, four of the top-ten IPOs in the region were in the Brazilian consumer market. In July, for example, fashion group Soma raised US$314 million from its listings. Three months later, Grupo Mateus, a supermarket operator, raised US$636 million in the second-largest listing of 2020. However, even the Mateus listing was overshadowed by Brazil's biggest IPO, which saw Carlyle-backed hospital chain Rede D'Or raise US$1.96 billion—the third-biggest IPO in Brazilian history.

The IPO recovery in Brazil partly reflects the strong bounce-back by the stock market in recent months, with share prices rising more than 82 percent between mid-March and January 2021. Another factor is demand for equities from local investors in the face of Brazil's historically low interest rates.

While the market fundamentals and the overall pipeline for IPOs in Brazil look extremely strong, elsewhere in Latin America, the outlook appears more unpredictable. Argentina's troubled economy, in turmoil even before the pandemic arrived, does not provide a conducive environment for new issues. Venezuela's economy has fallen victim to the country's political crisis. The more stable Andean countries—Chile in particular—may offer better prospects given their relative resilience.

However, it is Brazil's revival that will continue to be the big story and all eyes will be on Rio de Janeiro in the coming year.