The data White & Case gathered from 58 of the most active merger control jurisdictions globally reveals trends and insights that can't be gleaned from data on single jurisdictions considered in isolation.

Note: This is an update to the initial survey originally published on December 27, 2021. It incorporates newly available data from the United States, EU, and several other jurisdictions.

We are pleased to introduce the White & Case Global Antitrust Merger StatPak (WAMS), a resource providing information on merger control filing activity by competition authorities around the world. The WAMS survey currently includes filing data from 58 of the most active merger control jurisdictions in the world.

WAMS is the first tool of its kind to serve as a real-time clearinghouse for global merger notification data—all in one place—in an easy-to-access format. No single compilation of merger control filings has previously been assembled, particularly with anything like real-time, calendar-year statistics.

White & Case will continue to gather this data, adding countries when information becomes available and refreshing the dataset on a regular, ongoing basis.

As of 2019, 135 jurisdictions have enacted merger control laws that mandate competition authorities to review certain transactions, which is a significant increase compared to the number of regimes that existed ten years ago.1 As a result, the number of merger control filings have increased at an accelerating rate over the past half-century, particularly in the 2000s.

With the changing market realities and the rising tide of competition enforcement around the globe, this up-to-date merger data will be particularly important for companies considering mergers and acquisitions.

The WAMS data also show the rise of new antitrust merger enforcement regimes onto the scene, with implications for merging parties.

Table 1 below shows the results of our first compilation of worldwide merger notification data from 58 of the largest, most active competition authorities. The data are compiled by calendar year to the extent possible, although many agencies report annual figures on fiscal years that vary considerably. 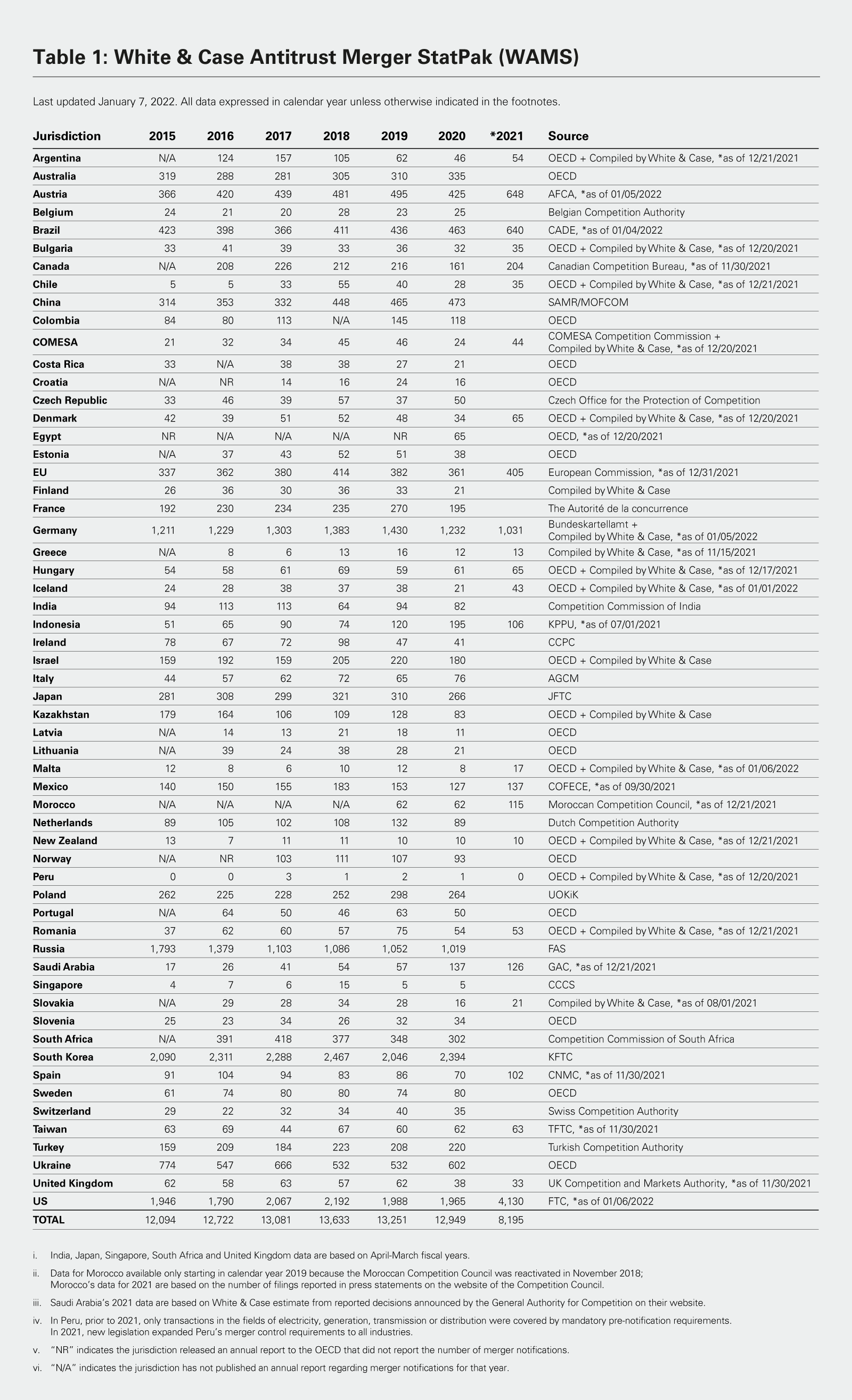 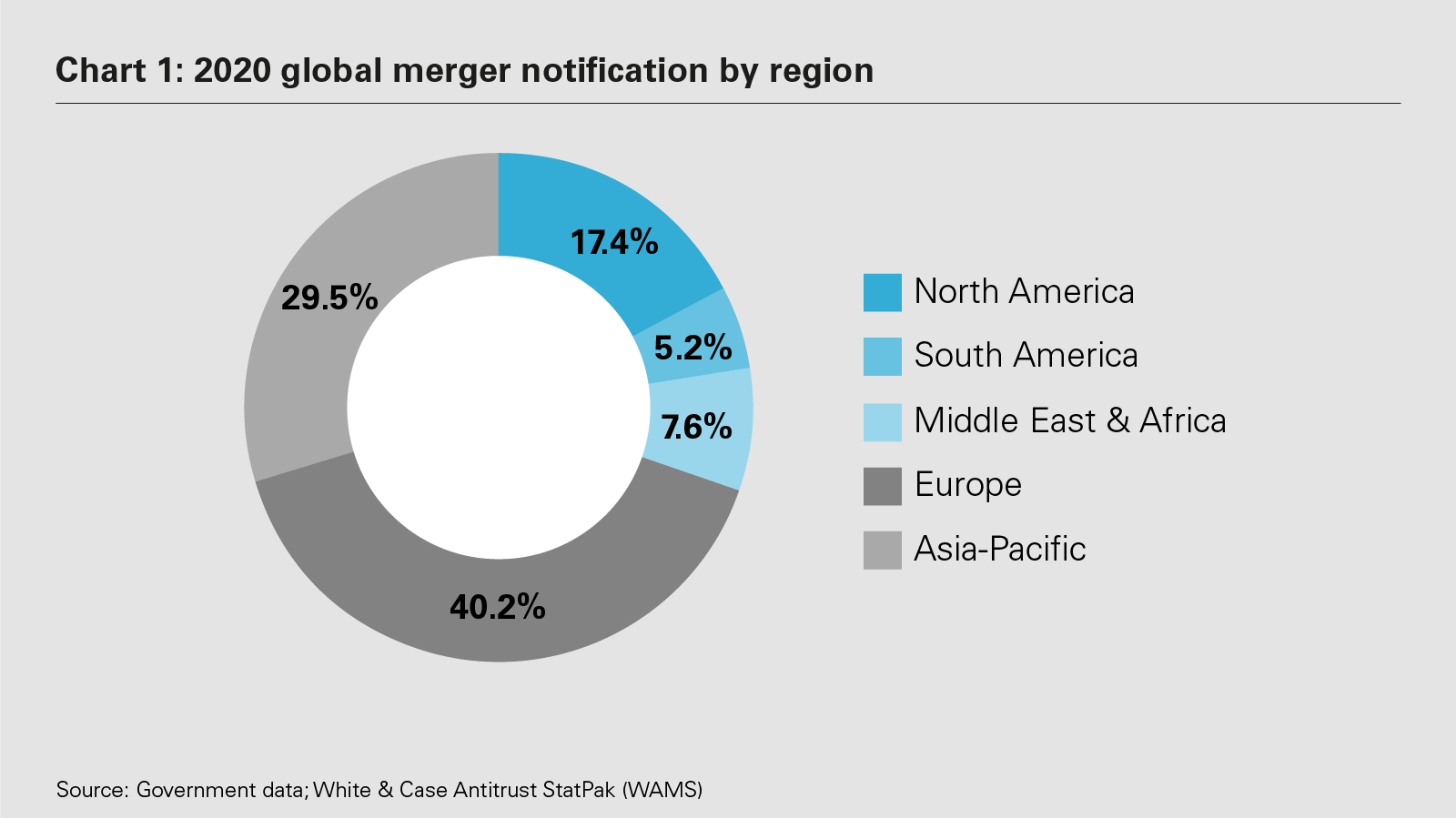 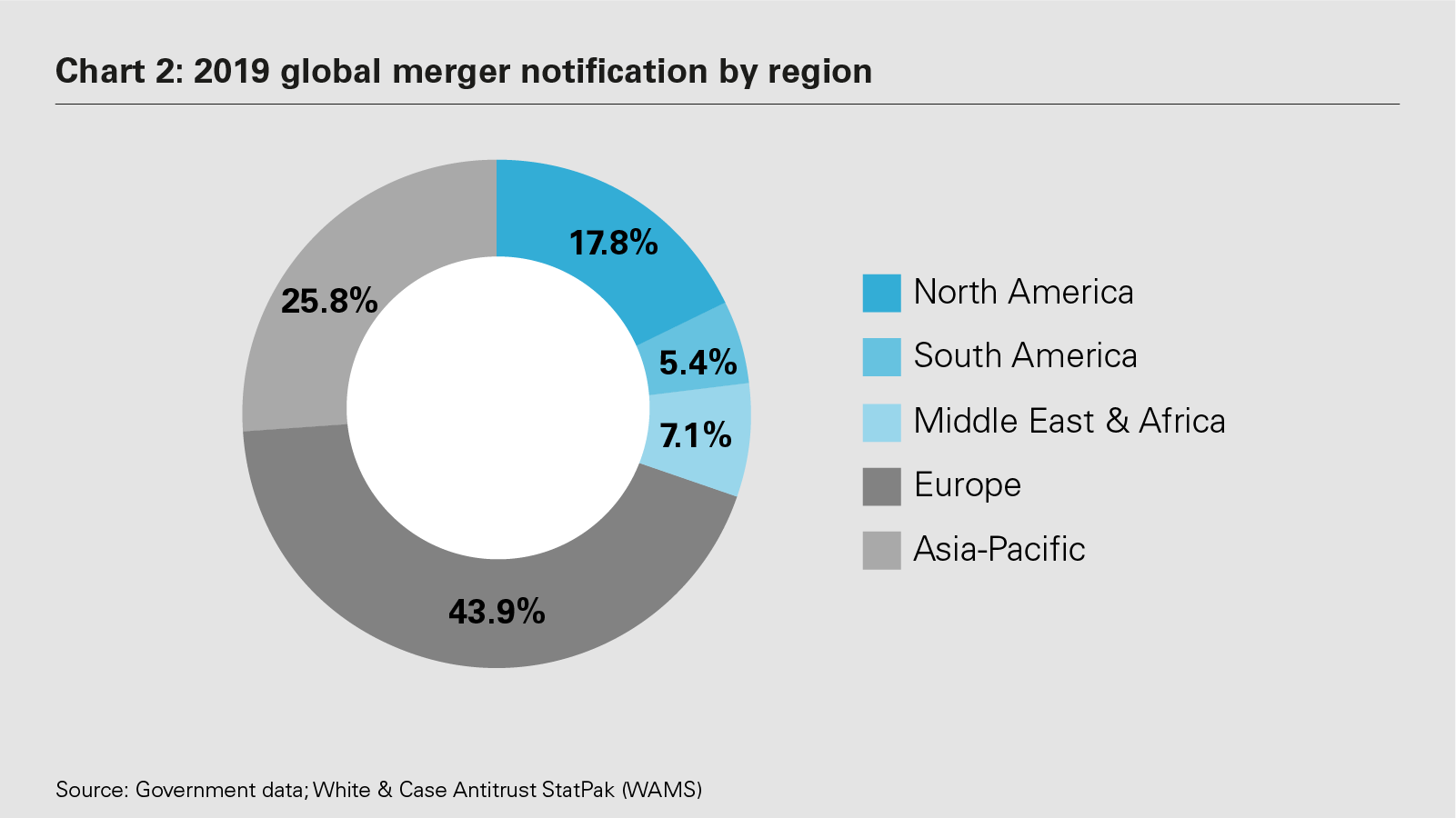 Based on the WAMS survey data, merger control filings with antitrust agencies overall rose significantly in 2021 over the levels of previous years.

Chart 3 shows merger control filings for 2021 compared to the five-year average of 2016 through 2020 in the 25 jurisdictions that provide enough of a level of reporting transparency permitting White & Case to calculate calendar year 2021 merger notification activity. 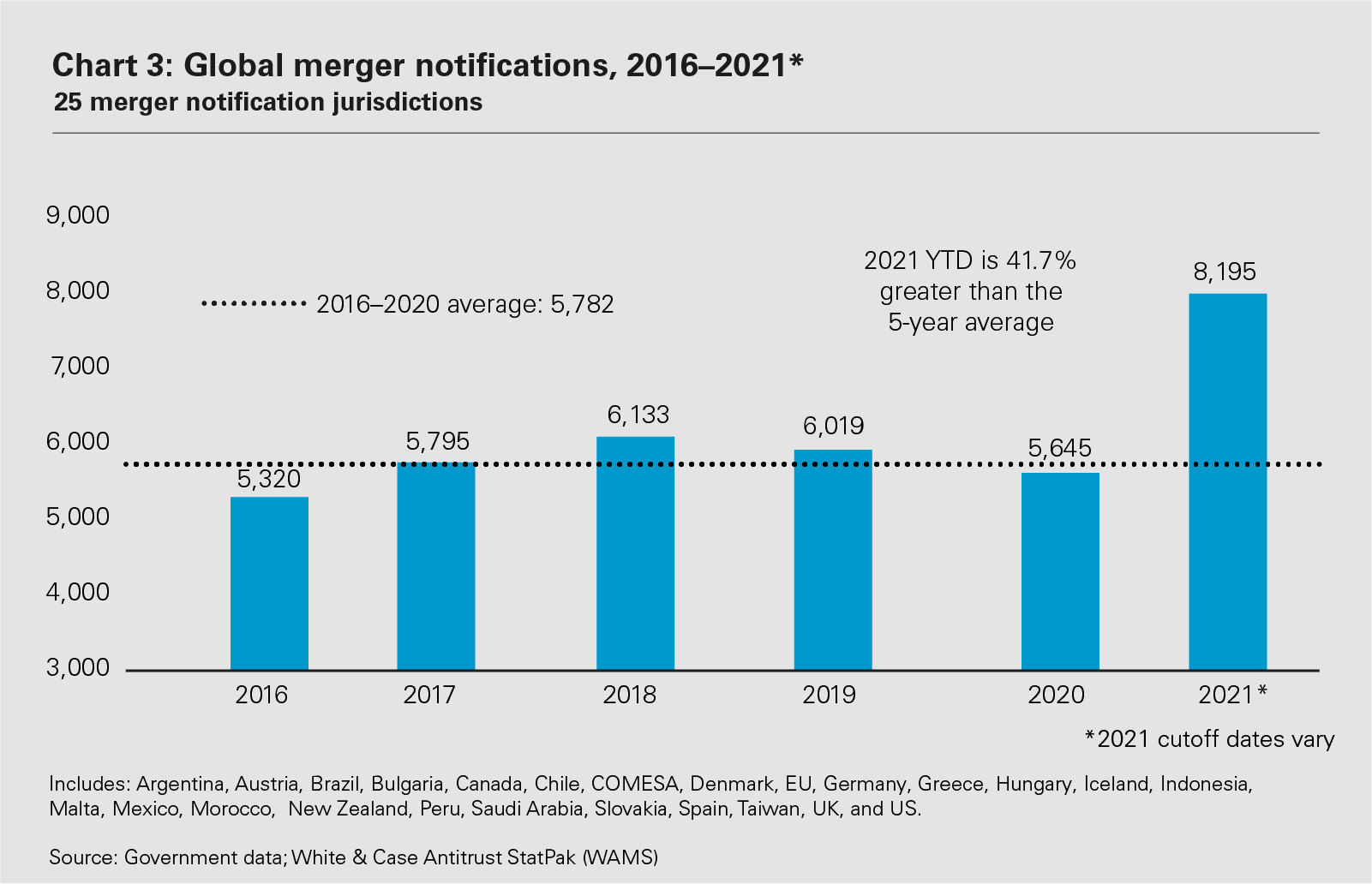 Judging by the 25 jurisdictions with 2021 data compiled in the WAMS survey, worldwide merger notifications are estimated to have increased nearly 42 percent in 2021 over the five-year average of 2016 through 2020.

In 2021, there have been 8,195 notified mergers in the 25 jurisdictions as compared to 5,782, the year-over-year average between 2016 and 2020. There were some notable regional and national trends in merger control filings in calendar year 2021 as follows. 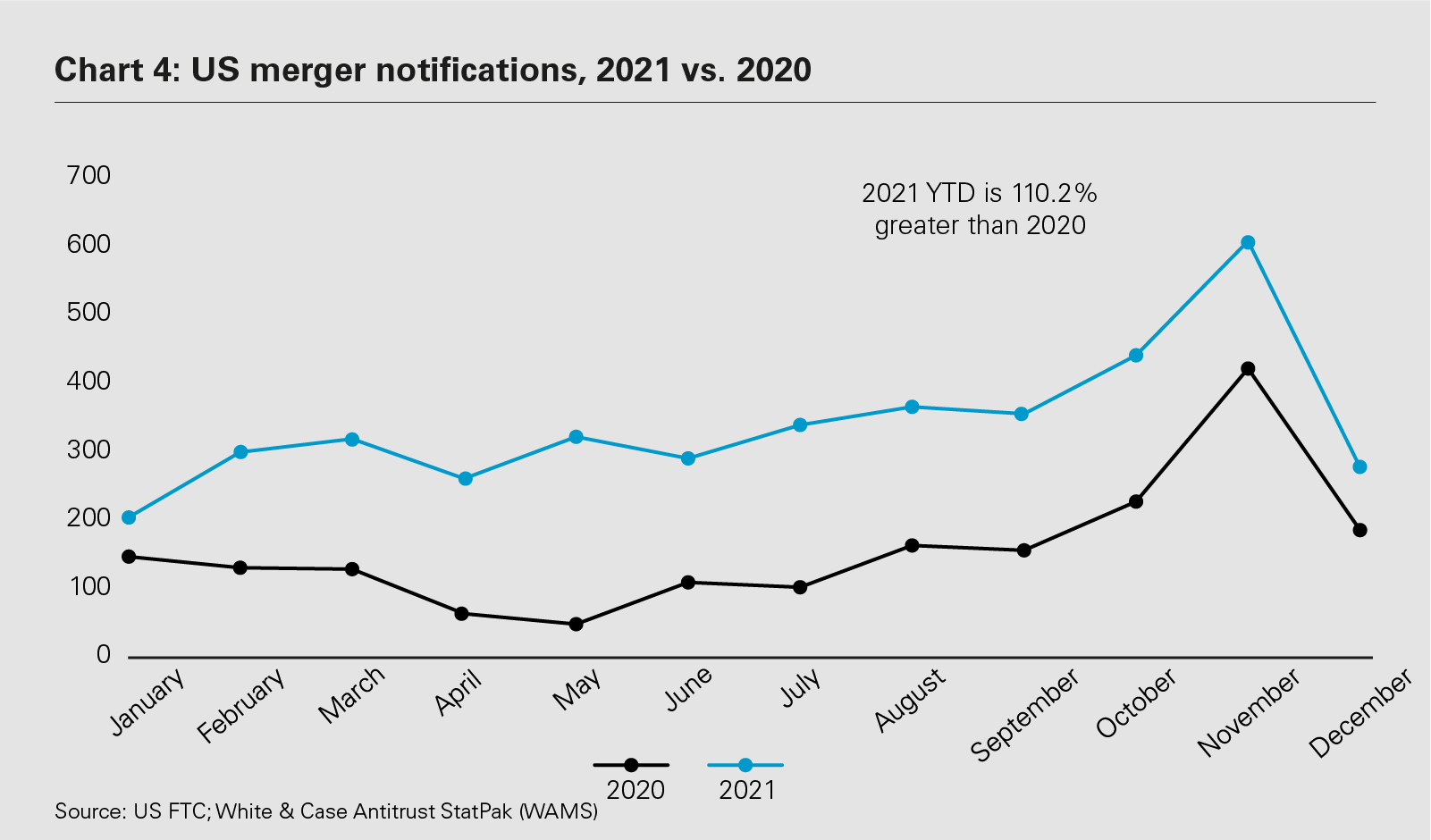 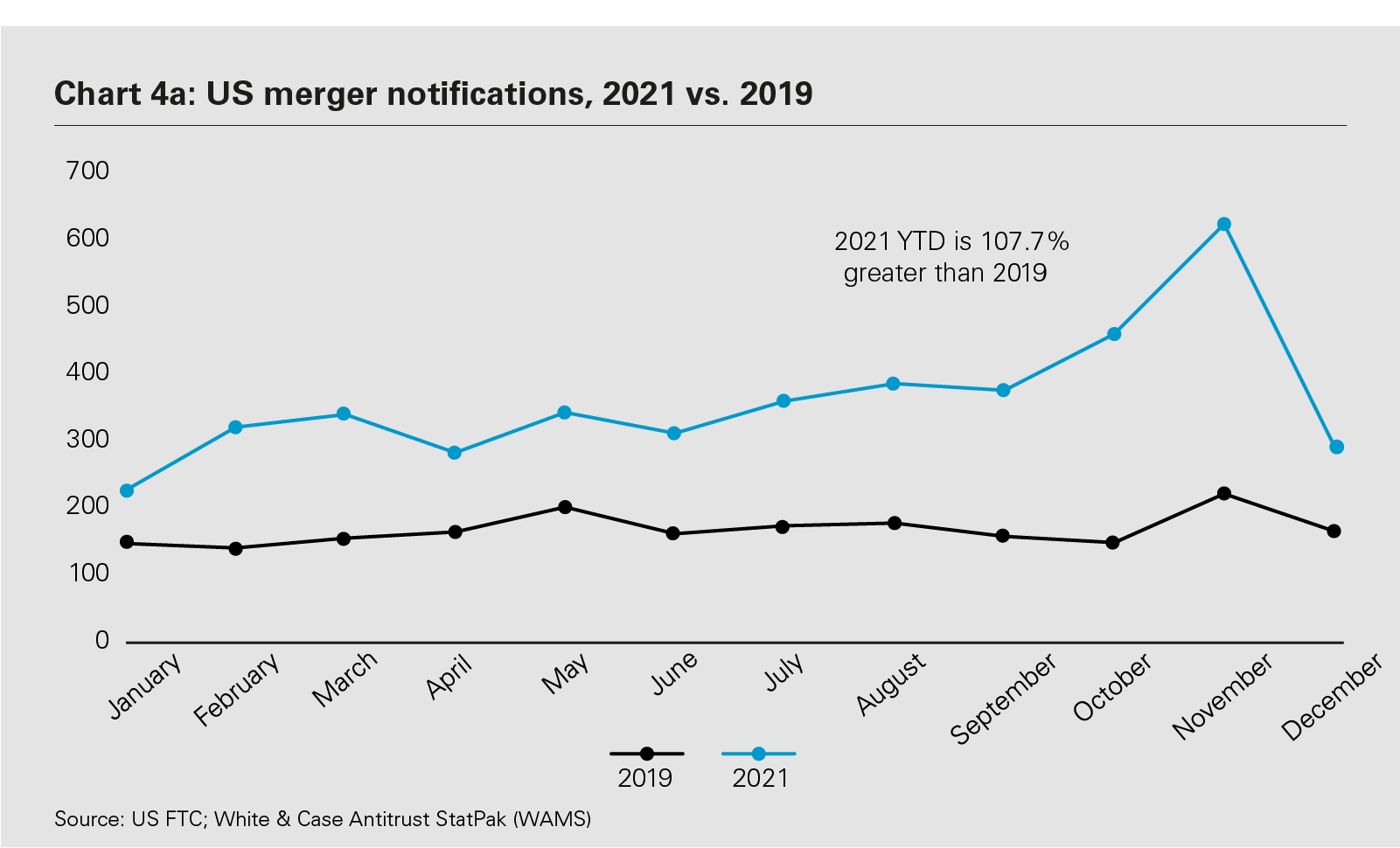 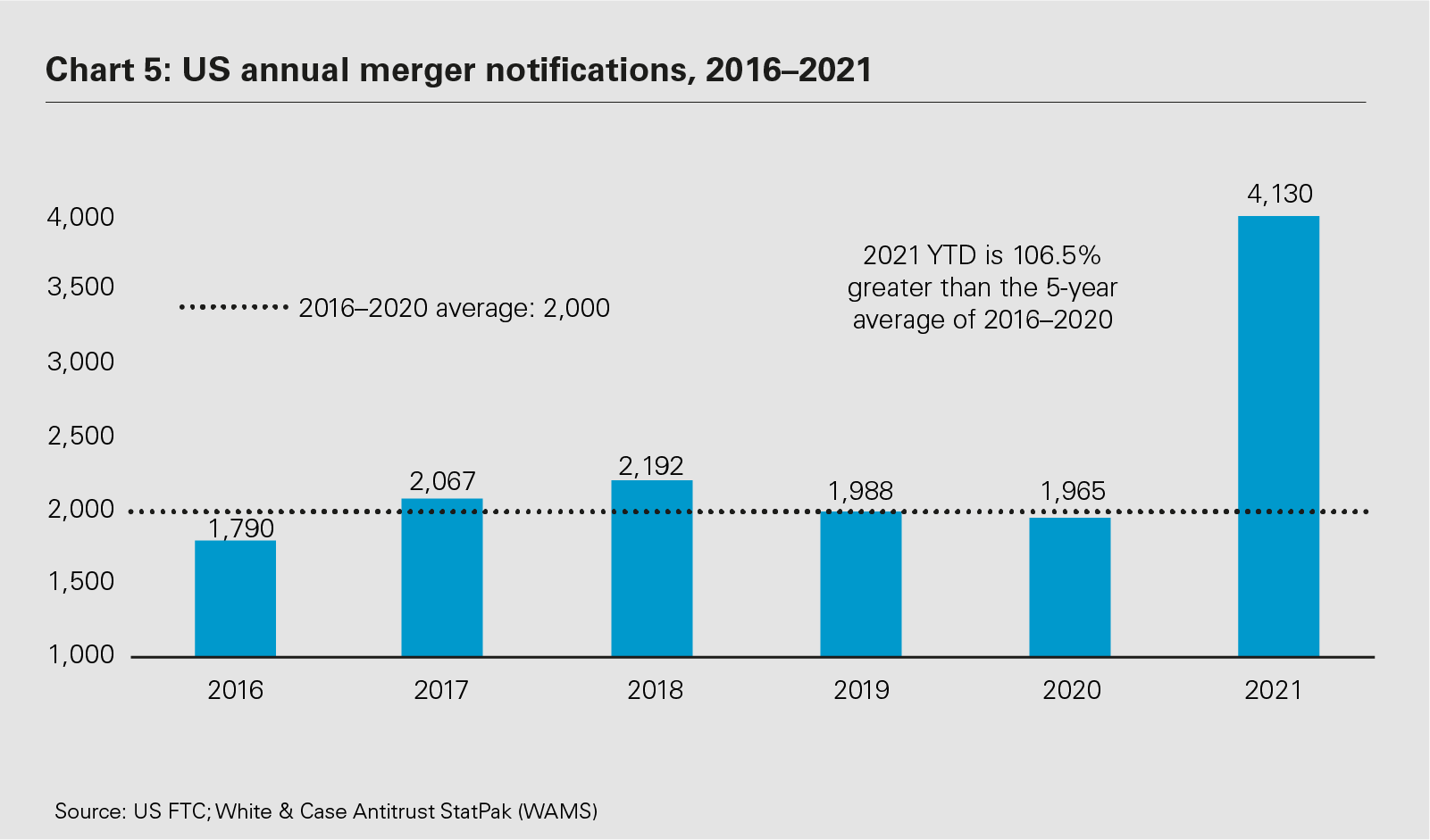 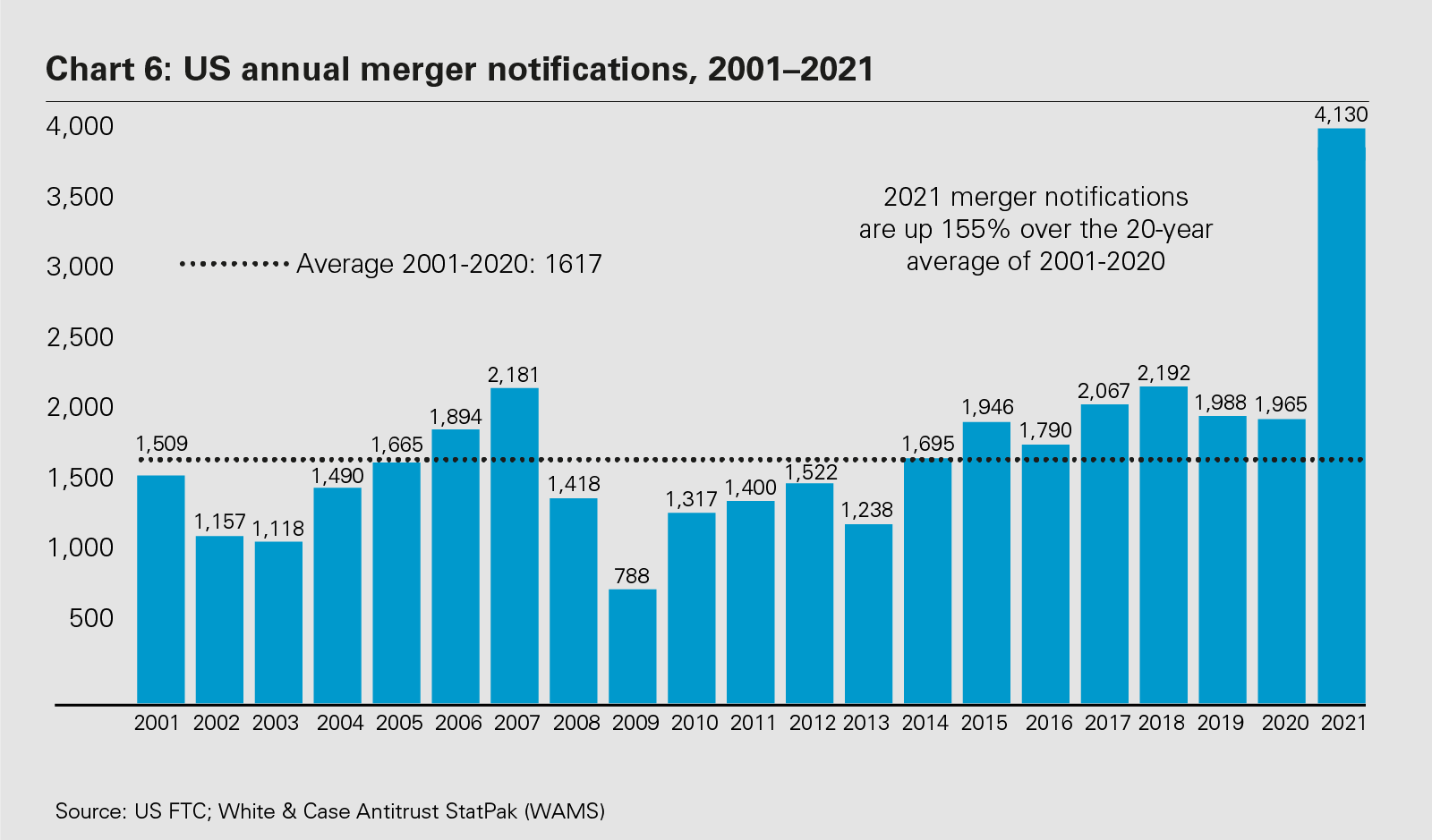 November typically represents a busy month for US HSR (Hart-Scott-Rodino) filing activity. However, November 2021 represented the all-time high for HSR filings in the US in the modern era, with 607 reported merger transactions to the antitrust agencies, more than a 40 percent year-over-year increase of the November 2020 total of 424 reported merger transactions. (In December 2000, the US Hart-Scott-Rodino Act was amended to raise the merger filing thresholds.) This increase in November 2021 may be the result, in part, of the 2021 policy suspending Early Termination (the clearance of certain mergers faster than 30 days), as discussed below.

With December 2021 data now in, December 2021 also represented a significant increase in filings, dwarfing the number of filings made in any previous December since 2011.

The FTC announced early in 2021 that it would temporarily suspend the decades-long practice of granting early termination of the HSR waiting period for the vast majority of transactions that do not raise substantive antitrust concerns.2 The suspension has continued throughout the remainder of the 2021 calendar year. As a result, merging parties in the US for most mergers with a 30-day waiting period had to wait the entire 30 days before closing. 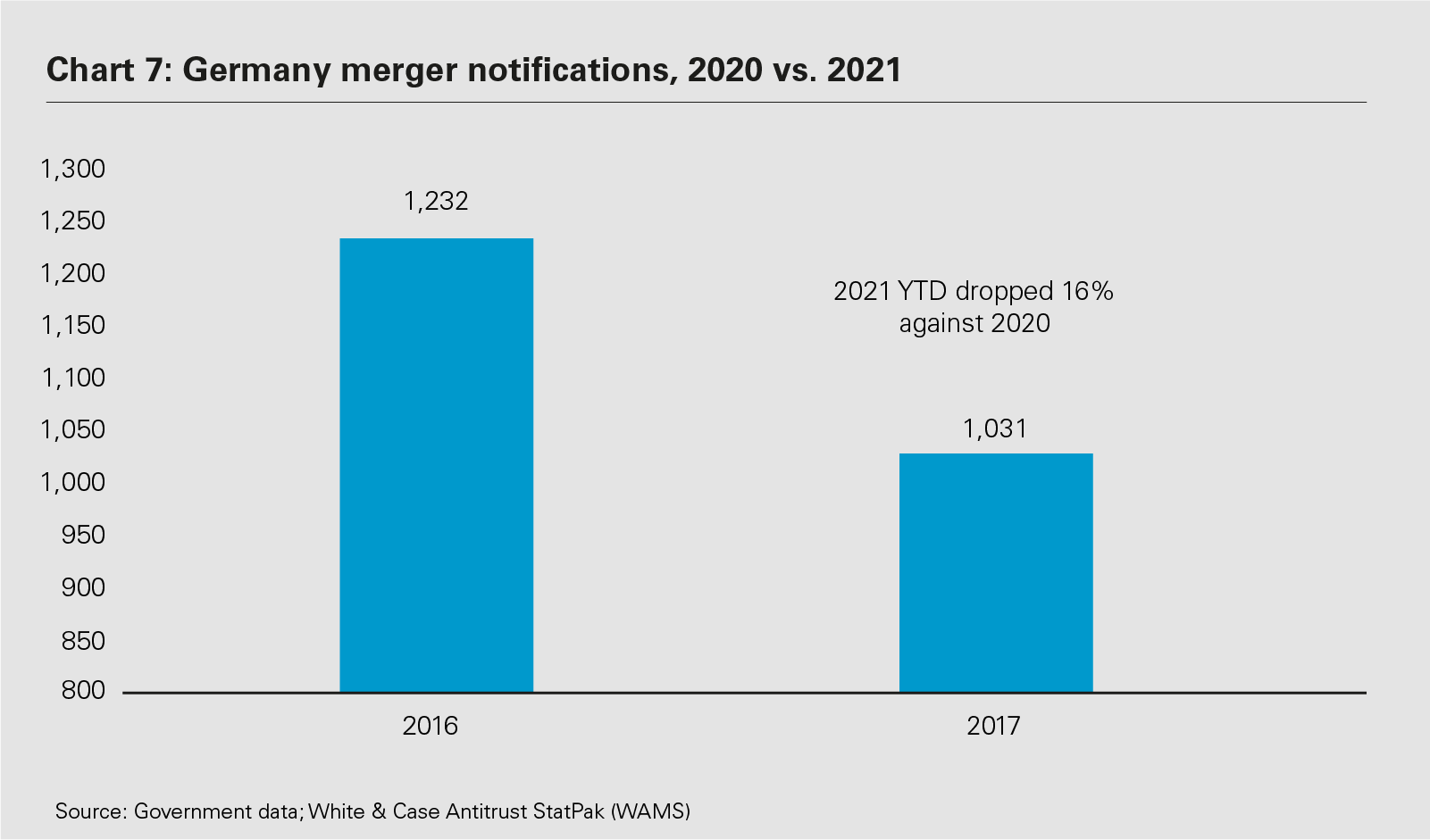 Based on the WAMS survey results for 2021, it appears that notifications in Germany are down roughly 16 percent versus 2020 and are down closer to 21 percent versus the five-year average of 2015–2019, as shown in chart 8 below. 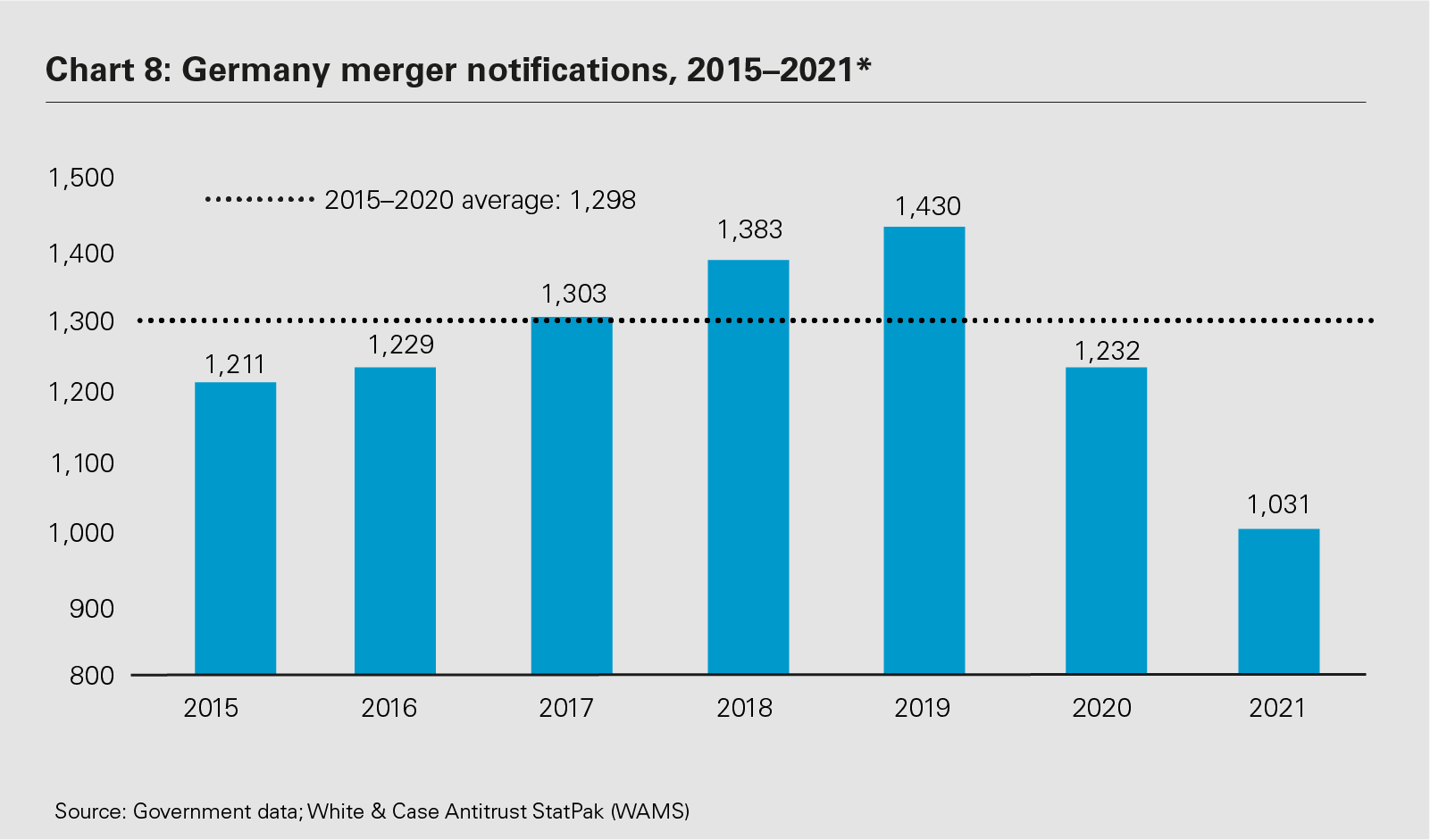 United Kingdom: No Brexit increase in merger filings yet

Following the end of the Brexit transition period on December 31, 2020, UK authorities had anticipated that its merger workload would increase perhaps by as much as 40 percent and 50 percent as a number of cases notified to the European Commission would also be notified in the UK. Certainly Brexit has impacted the considerations merging parties evaluate.4 According to WAMS survey data, UK merger notifications have so far not increased post-Brexit in calendar year 2021. 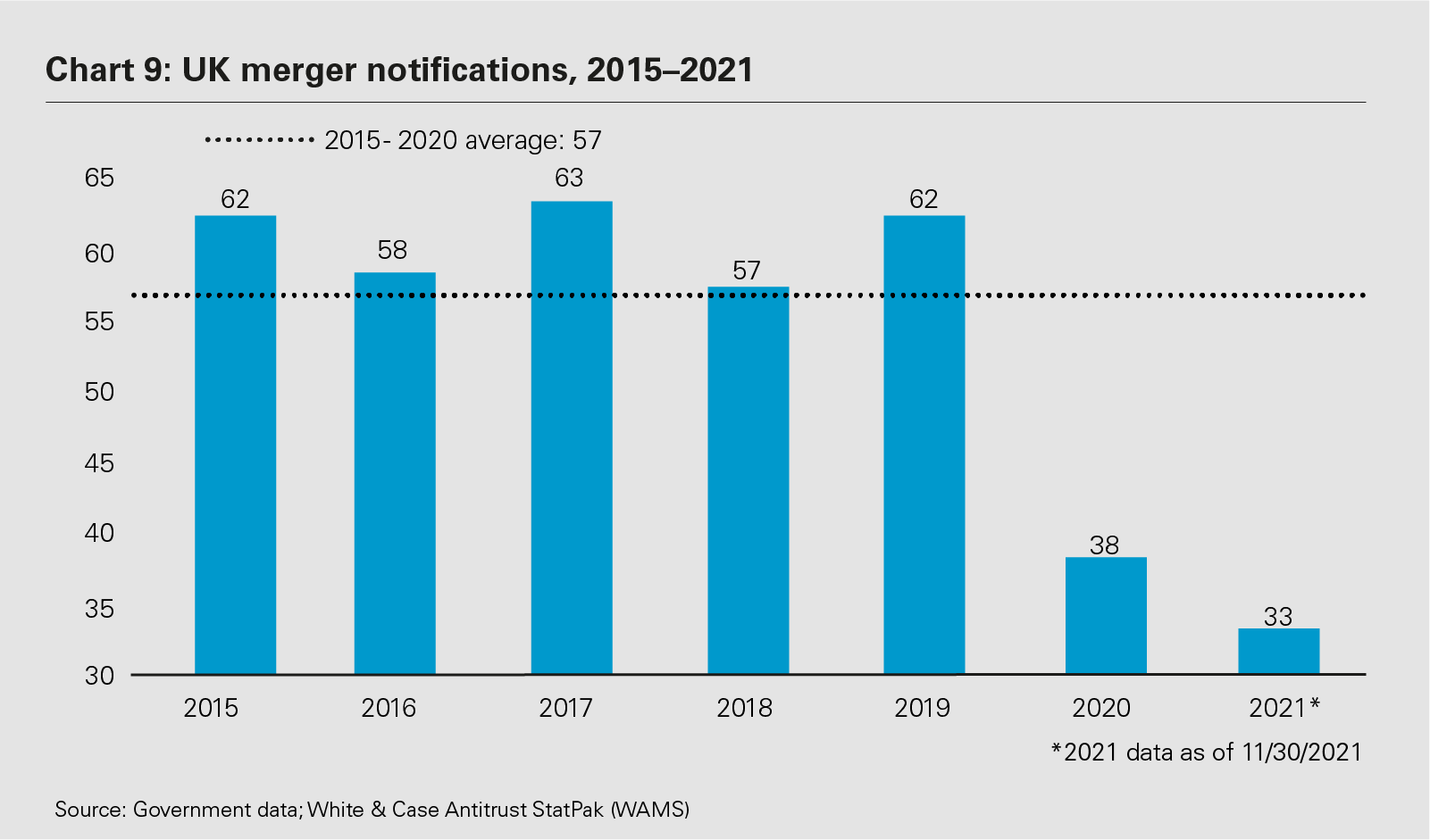 As of November 30, 2021, there have been 33 notified mergers in the UK according to WAMS data. This level of merger notification is largely the same as the total figures for 2020 (38) but significantly below the average of 60.4 filings for the five-year period of 2015 through 2019 in the UK.

One of the clear trends of the past four years according to the WAMS survey has been a steady increase in filings for merger control in the Middle East and North Africa in 2017 through 2020. The merger control regimes have become more mature, and it appears as well that economic activity is rising throughout the Middle East and North Africa region. We expect this trend to continue based on WAMS data and our experience. 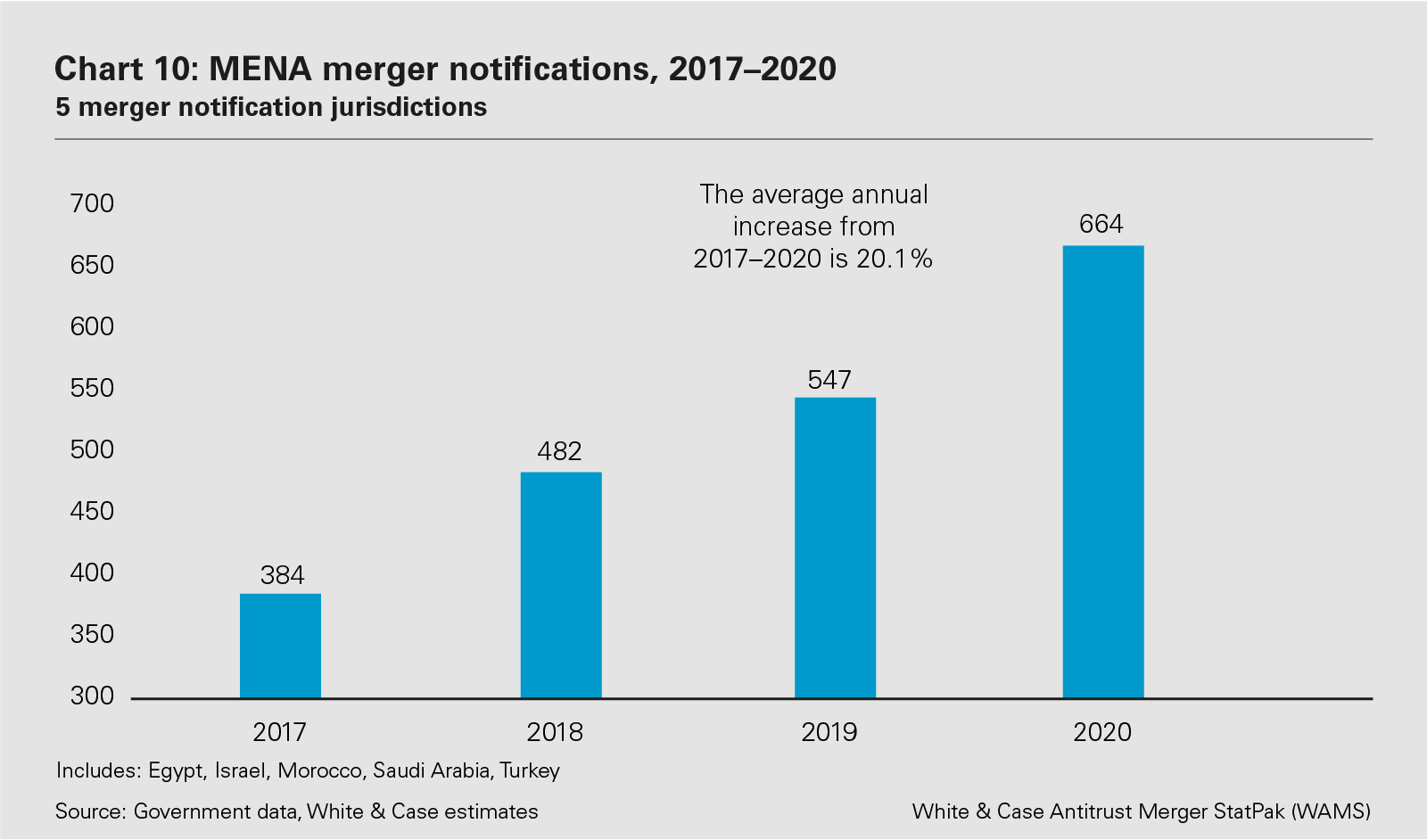 Over the past five years (2017–2021), WAMS StatPak data demonstrate that merger control filings within the Middle East and North Africa region have increased dramatically as merger notifications regimes have come into existence. Merger filings in the Middle East and North Africa have nearly doubled in the past four years (2017–2020), according to the WAMS survey. For example, in November 2018, the Moroccan Competition Council was reactivated, resulting in reported merger control filings in 2019 and thereafter. 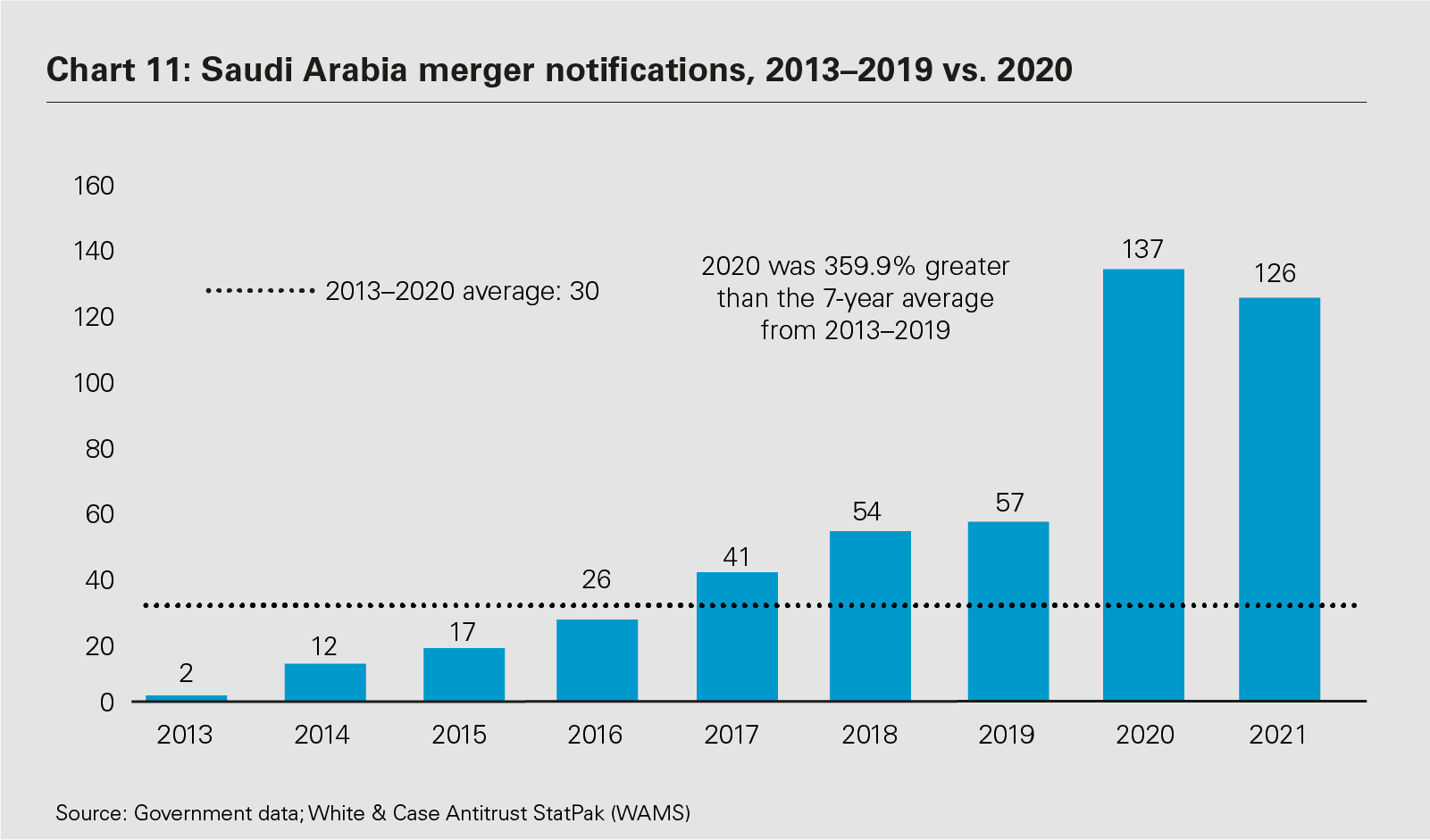 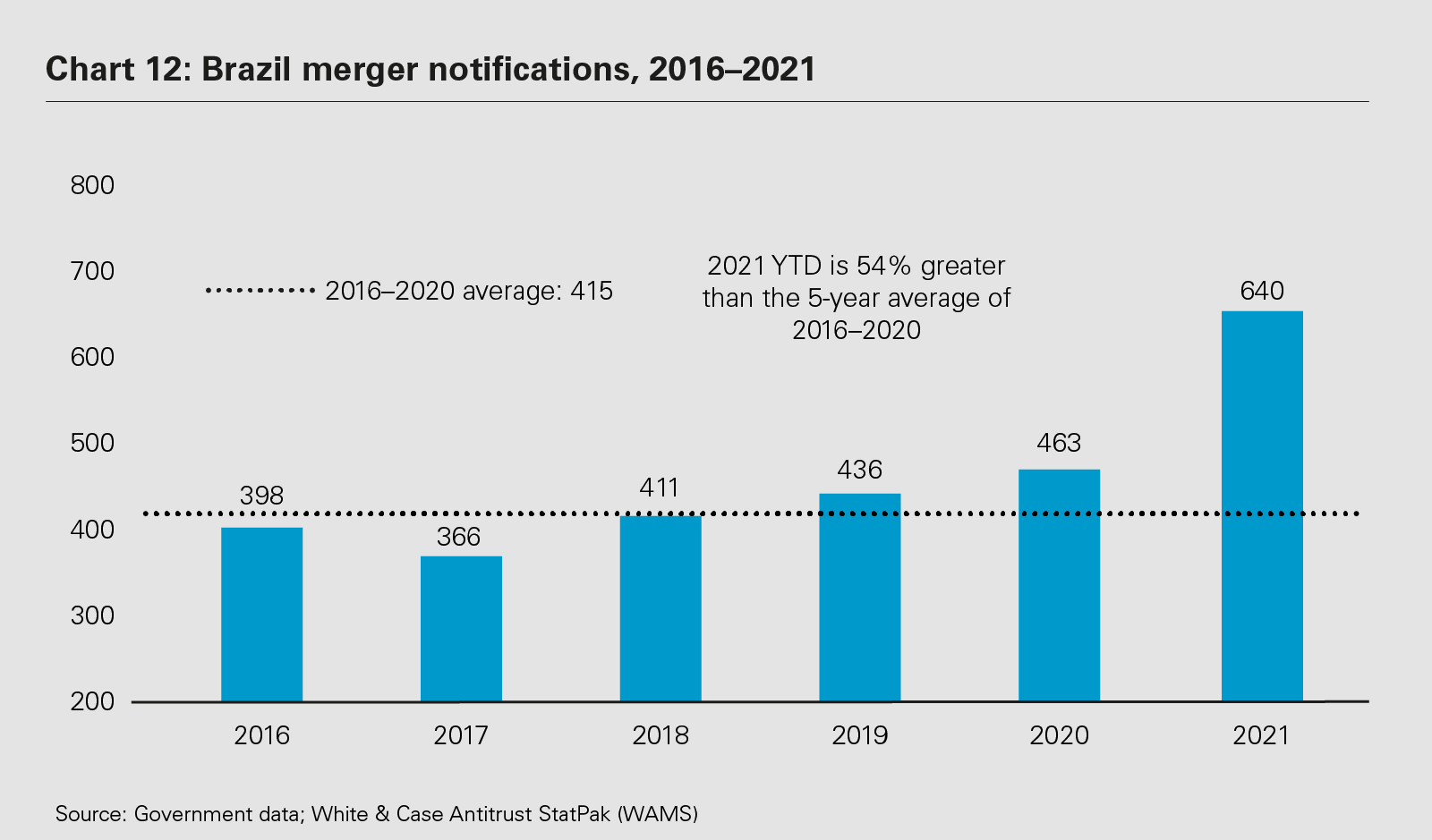 In Europe, 2021 represented the second-highest number of merger notifications for the European Commission (EC) since 1990. The EC accepted 405 merger filings in 2021, a 12 percent increase compared to 2020. 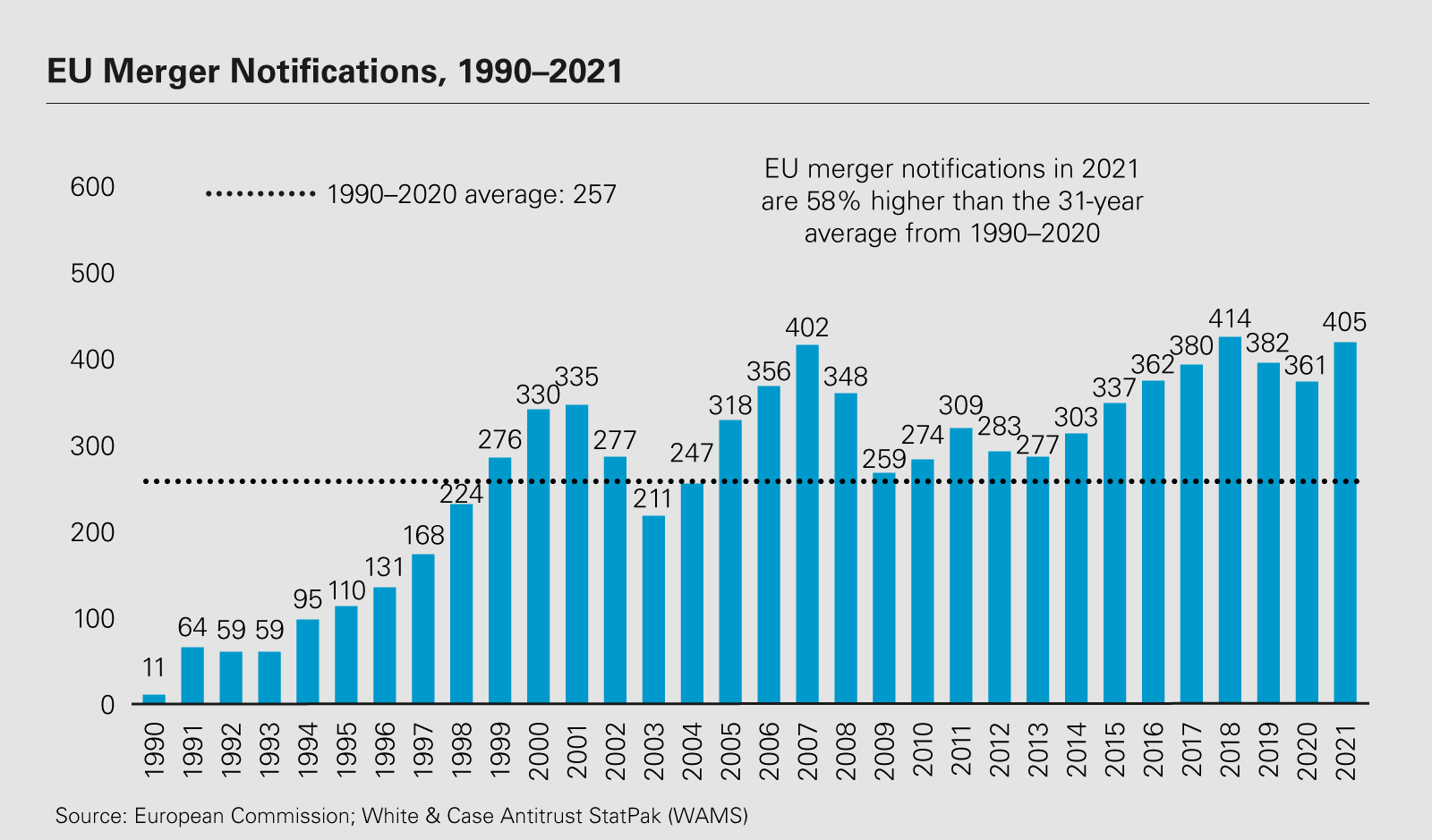 The White & Case Antitrust Merger StatPak (WAMS) is a practical survey tool that will be refreshed regularly. It will help companies and practitioners assess the merger notification landscape to see trends and filing activity around the globe.

It is hoped that the WAMS will prompt greater transparency and additional real-time reporting by antitrust merger control authorities around the world. Transparency assists merging parties in complying with the law.