The UK Pensions Regulator is gaining stronger powers, which will have a significant impact on companies undertaking activities such as M&A, secured borrowing, and restructuring. Following best practice and thinking ahead have become more important than ever.

The authors would like to thank Dan Mindel and Alex Hutton-Mills of pensions corporate finance advisor Cardano for their contributions to this article.

The Pension Scheme Act 2021, which came into force on 1 October 2021, has given the UK's Pensions Regulator (TPR) a host of new powers including the ability to impose criminal sanctions or prosecute offences relating to defined benefit (DB) pension plans.

The legislation was the result of several years of work, with its roots in the high-profile collapse of retailer BHS and its pension schemes in 2016 and the liquidation of construction firm Carillion two years later. The two events helped spur the government into proposing the changes, which are now being implemented.

TPR already has strong existing anti-avoidance powers set out in the Pensions Act 2004 relevant to corporate transactions, including M&A deals and restructurings, where there is a UK DB pension plan in the group.

It has the power to issue a contribution notice (CN) requiring an employer (or connected or associated person) to pay a contribution to the pension plan of up to the full pension plan deficit, where a transaction is materially detrimental to the likelihood of plan members receiving their pension benefits.

It can also issue a financial support direction requiring an employer (or connected or associated person) to put in place financial support— usually a corporate guarantee—for the pension plan where the existing employer is 'insufficiently resourced'.

Following several high-profile pension scandals in the UK, in particular the BHS case where it was perceived that TPR had insufficient powers to protect pension plan members, the government published a white paper in 2018 focused on the protection of DB pension schemes.

The white paper contained a number of recommendations aimed at strengthening TPR's moral hazard powers, many of which have subsequently been implemented in the Pension Schemes Act 2021.

Employers running DB pension schemes should get to grips now with the details of the new powers because early engagement with pension trustees and mitigation in advance will benefit both the business and the scheme.

The use of a bespoke mitigation solution will be helpful—for example, seeking specialist investment advice or documenting an agreement with trustees to plan for the scheme's ultimate wind-up. These types of solutions will reduce regulatory risk for the company. 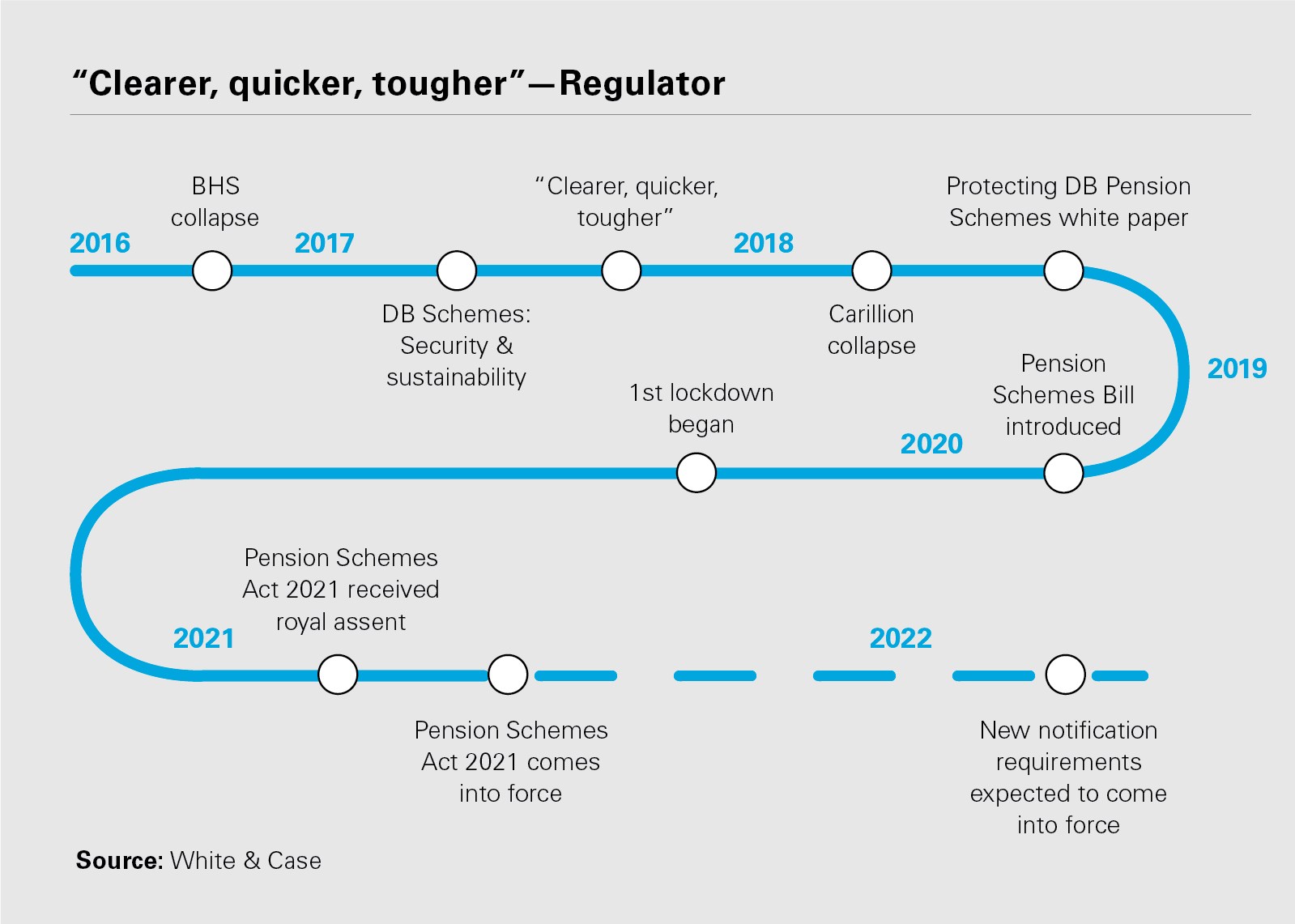 The most eye-catching change in the new legislation is the introduction of criminal offences relating to anti-avoidance activity in relation to a DB pension plan. There are three new criminal offences.

The first offence is engaging in an act intended to prevent the recovery of, compromise or reduce a statutory section 75 debt due to a DB pension plan.

This offence is subject to the additional requirement that the person must also have known or ought to have known the act would have that effect; or not have had a reasonable excuse for engaging in the act.

The second offence is engaging in an act that detrimentally affects the likelihood of accrued pension scheme benefits being received. As with the first offence, those accused must have been aware the act would have that effect, or not have had a reasonable excuse for engaging in the act.

Anyone guilty of these new offences is liable to a fine of up to £1million, a prison term of up to seven years, or both.

Thirdly, a failure to comply with a CN from TPR will also be a criminal offence for the first time.

The potentially wide application of the new criminal powers to 'any person' is noteworthy. This contrasts with TPR's existing anti-avoidance powers which apply only to employers in DB schemes and connected companies or directors.

During the act's passage through parliament, this aspect was controversial and received some criticism from industry bodies and in the House of Lords. In theory, it means that banks, purchasers, investors, professional advisers and pension scheme trustees will potentially be subject to the new powers where a transaction is detrimental to a pension scheme.

It should be noted that actions by insolvency practitioners acting in accordance with that role are excluded from the scope of these offences.

While there is inevitably significant uncertainty at this stage as to how TPR will exercise its new criminal powers, it is generally expected that these will only be relevant to the most serious breaches. This has been confirmed by TPR's guidance on how it intends to exercise the powers. The regulator said the offences are not intended to affect normal commercial activity, and that it will prosecute 'the most serious examples of intended or reckless conduct that were already within the scope of our contribution notice power'. 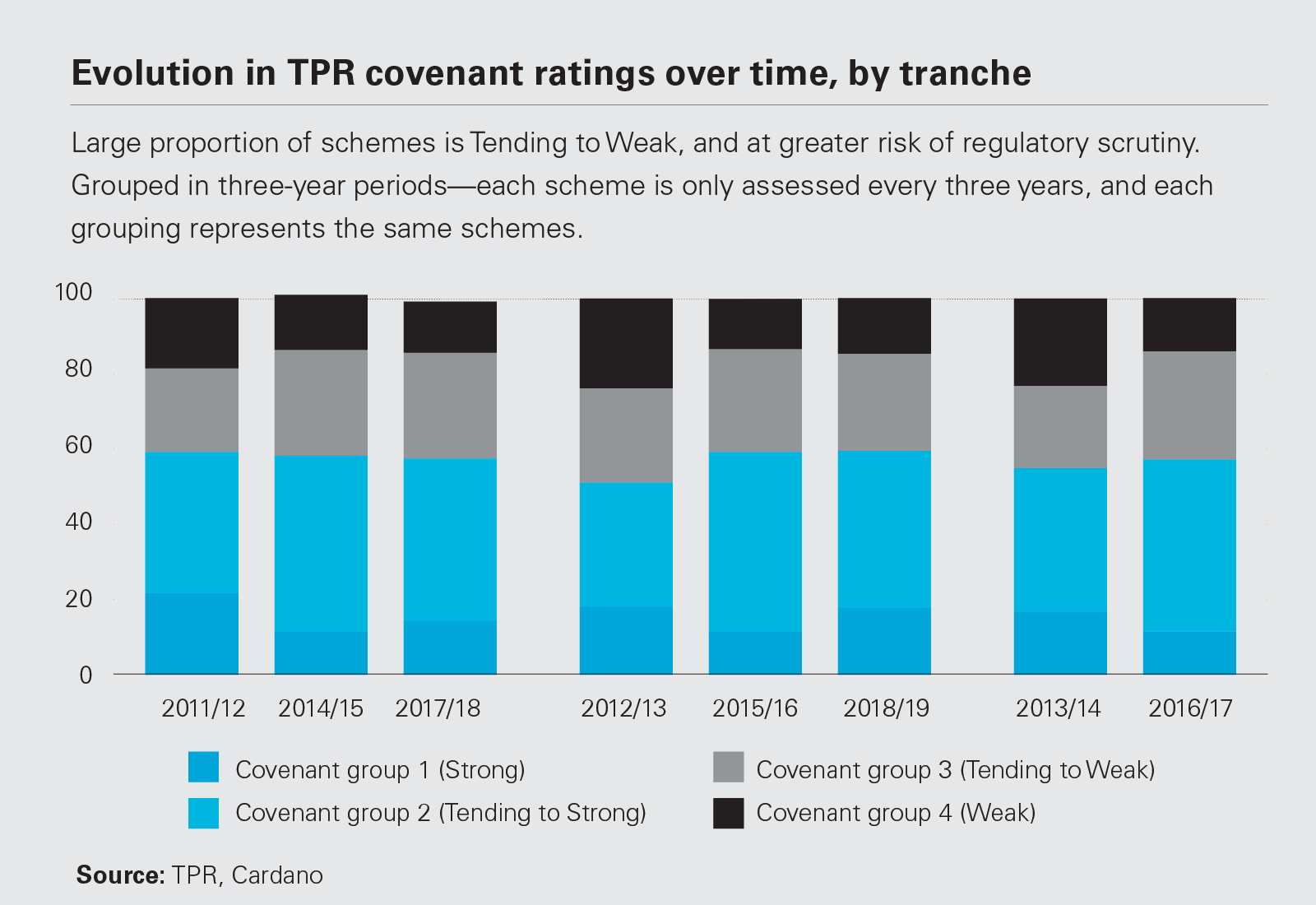 Evolution in TPR covenant ratings over time, by tranche (PDF)

TPR's existing power to impose a CN on employers, their directors and connected companies has been extended by the introduction of two new and potentially quite wide and discretionary grounds for the issue of a CN.

These new grounds are TPR believing that:

Dan Mindel, managing director of pensions corporate finance advisor Cardano, points out that the new employer insolvency test focuses on the role of the pension scheme as an often-material creditor of the sponsor.

In line with the existing statutory defence to a CN, the defence to a CN being issued on these grounds is that the person has given due consideration to the potential breach of the law and has taken all reasonable steps to eliminate or minimise the potential for their act to have this effect.

In the past, typical approaches to mitigating the detriment caused have involved making additional cash contributions to the pension scheme. However, as some schemes become better funded, non-cash options such as security or guarantees, or contingent funding arrangements, have become more popular.

'The diverging positions of UK schemes have led to a greater focus on tailored approaches to providing mitigation. Side agreements on future funding targets and investment strategies are increasingly common to help schemes reach their end game in a cost-effective manner', says Cardano managing director and partner Alex Hutton-Mills.

A key element of preparing for the new powers will be early engagement with pension trustees around the impact of the transaction on the scheme, and taking suitable steps to ensure that the statutory defence is available in the event of a future challenge from TPR. 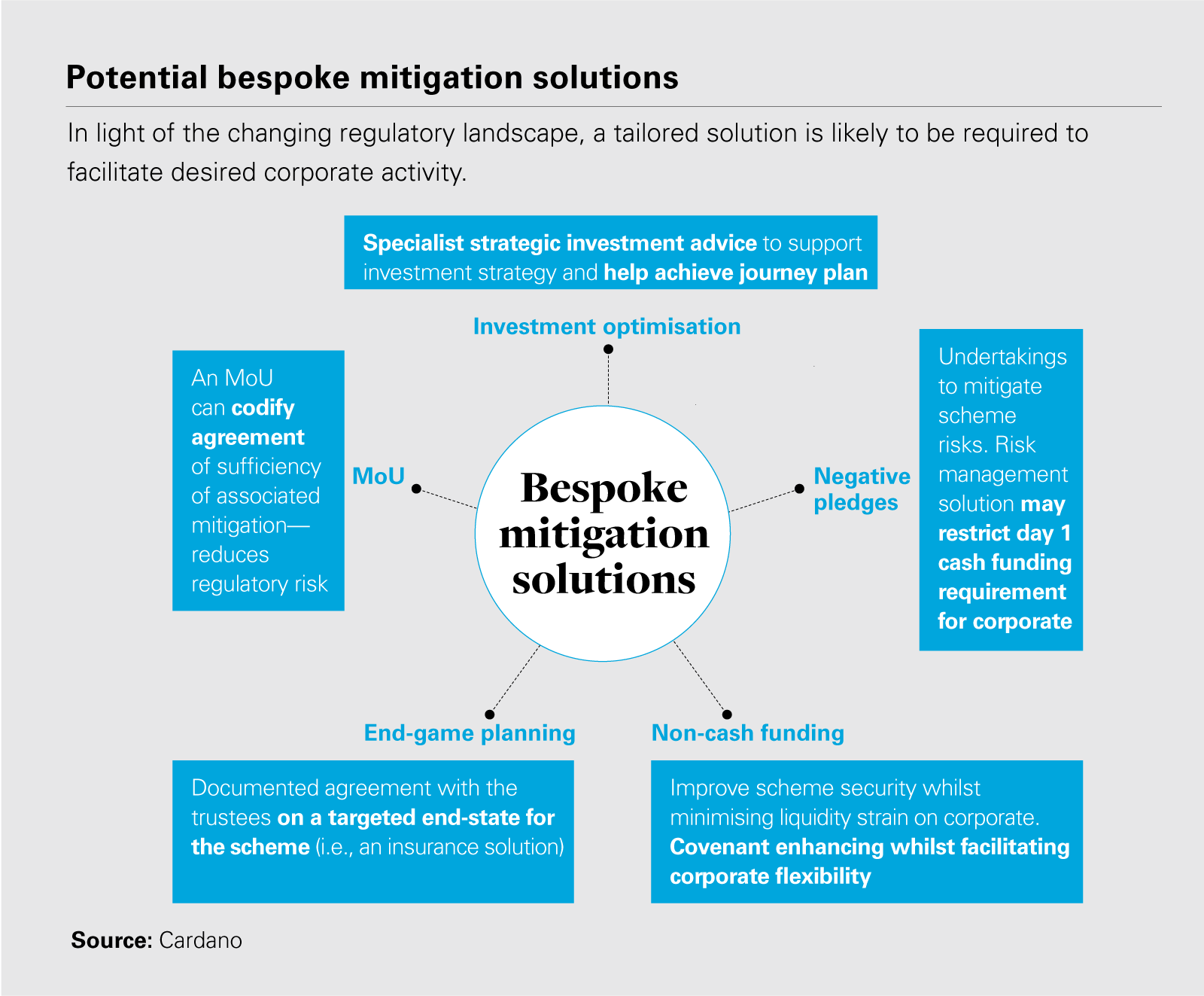 Another important provision in the act, which is expected to come into force in early 2022, is a new requirement for planners of certain corporate transactions to provide TPR and the pension trustees with a written 'accompanying statement'. This will have to include information about the transaction, and how any detriment caused to the pension scheme by the transaction is to be mitigated.

According to the latest draft regulations published by the government, the events triggering this requirement are expected to be:

This new requirement is likely to apply to a wide range of corporate transactions and will have to be factored in by companies at an early stage in their transaction planning.

Hutton-Mills warns that these proposed notification requirements will, if approved, lead to compression of the deal timeframe, particularly for public takeovers.

'Spotting the scheme early, taking advice and engaging quickly with trustees and TPR is a must to keep a deal on track', he adds.

A failure to notify these events and to provide a supporting statement could lead to a fine of up to £1 million under TPR's new powers. 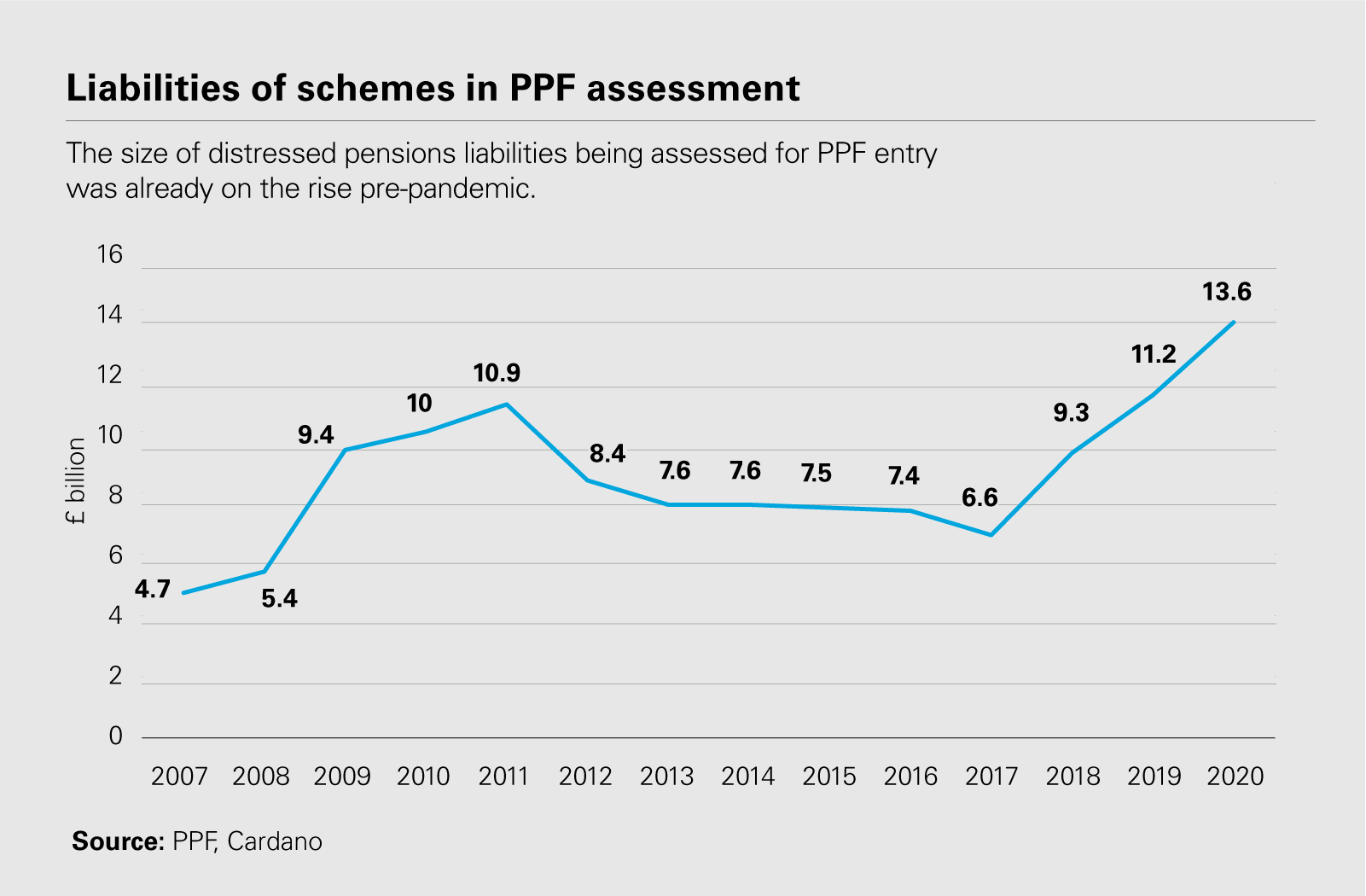 The impact on restructuring

Many of the legislative changes introduced are a result of several recent high-profile corporate insolvencies, including that of BHS, which have left pension schemes underfunded and seen pensioners lose out on some of their benefits. BHS was sold by Philip Green in 2015 to Dominic Chappell for only £1 and when it collapsed a year later, there was a pension scheme deficit of £570 million.

TPR's investigation into the collapse concluded that Green had sold the business to avoid liability for the pension schemes if the retailer became insolvent.

The case once again highlighted the vulnerability of pension schemes established within a financially distressed business.

Issues relating to pension schemes are often perceived to be low down the list of priorities when a business is being restructured, but TPR's new powers should be a reminder to employers to factor pensions aspects into the deal early on and to actively engage with the pension trustees, TPR, or both.

Cardano's Mindel says the heightened risks around pension schemes in restructurings should be something that principals and advisers are on alert for.

'Engagement with TPR and the Pension Protection Fund ahead of a process is crucial to stay out of their cross-hairs', he notes. 'Failing to do so could well attract scrutiny and lead to implications arising out of the new sanctions once the dust has settled'. 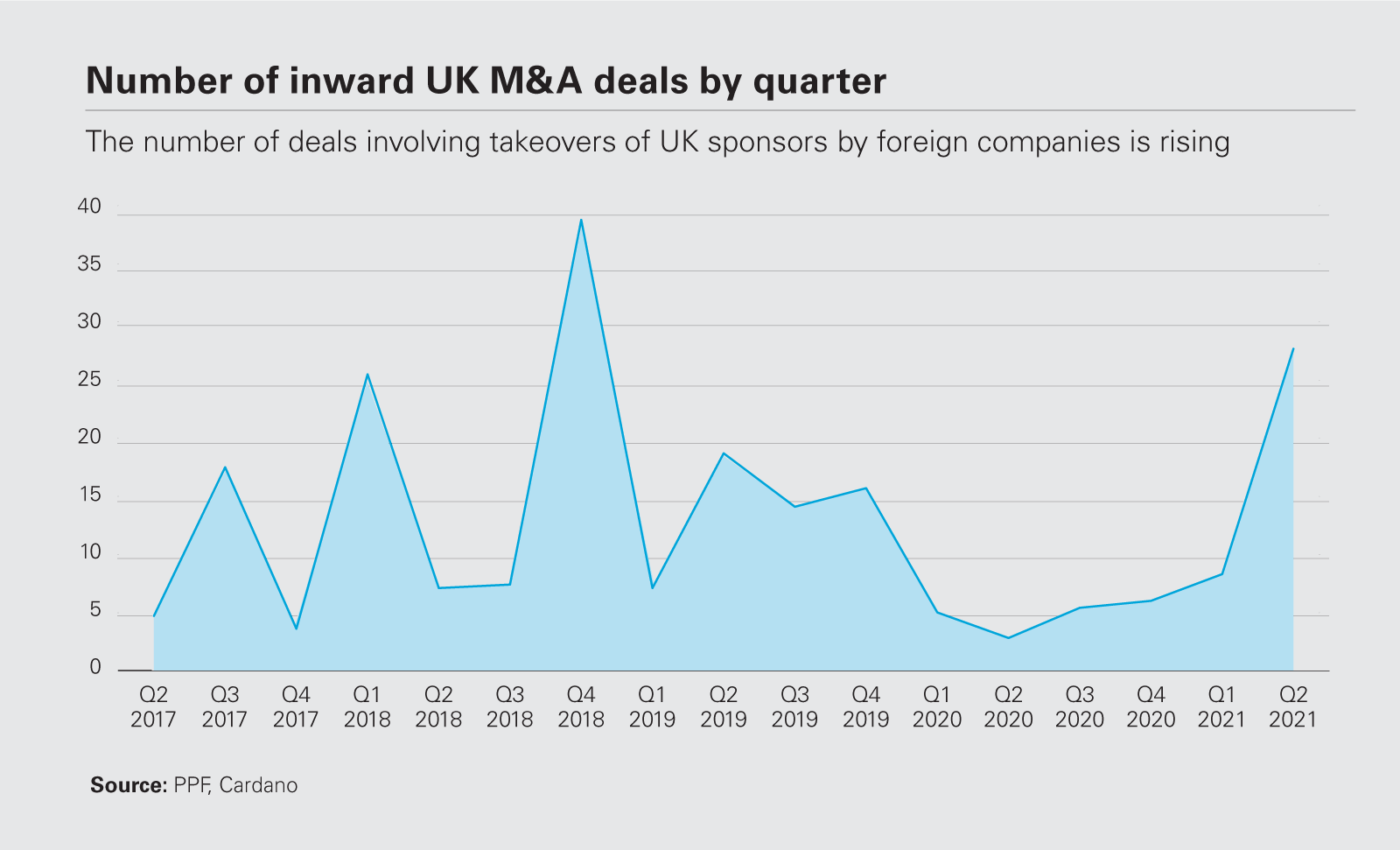 TPR may seek to use its new powers in the early days as a deterrent to others, and this is another reason for employers to engage early both with pension trustees and TPR on relevant transactions.

International companies need to be particularly aware of the changes, as they put the UK on a different course to much of the world.

Ultimately, TPR's criminal powers are not designed to stop corporate activity from taking place. But they should encourage more forethought and early mitigation of events that could otherwise have a negative impact on DB schemes.