Historically, one of the key concerns of LPs regarding African private equity has been the number and quality of available exit routes. Illiquid domestic exchanges as well as political and foreign exchange risk have all weighed on the exit multiples that investors have hoped to achieve. However, as the African private equity market matures, the chances of achieving a successful exit have notably improved. The African Private Equity and Venture Capital Association (AVCA) and African Securities Exchanges Association (ASEA)1 have reported a record number of PE firms in Africa exiting in 2015 and 2016 (44 and 48, respectively), which is double the numbers that were achieved a decade ago. Nor was this record exit activity confined to a small group of private equity funds. It involved 48 deals spread across 31 firms.

Furthermore, the majority of respondents in a 2016 Deloitte report2 expected the volume of exits in the 12 months that followed to increase or remain the same, despite increasing challenges in the debt funding environment.

Performance among African private equity exits is not uniform across the continent. Political and macro-economic drivers differ significantly from region to region. It is no secret that South Africa has historically been home to by far the most private equity investment, due to its more advanced and diversified economy as well as its relatively stable political platform. By both market capitalization and number of listed companies, the Johannesburg Stock Exchange (JSE) is considerably larger than all the other African bourses combined (Figures 1 and 2). This investment matured into 42 percent of the continent's exits over the past ten years, which is 13 percent more than the next four countries combined.3 While South Africa's reign as the most advanced African economy looks set to continue for at least the next few years, the general consensus is that the country's economy will continue to deteriorate in the short term, which is likely to increase exit activity and reduce multiples in the coming years.

The next region that has experienced the most private exits is West Africa. Between 2011 and 2016, West African transactions accounted for 27 percent of Africa's total deal volume compared to only 18 percent in East Africa.4 These transactions were not only focused in the resources sectors but also retail sectors, as profits flowed down to employees and generated a more affluent consumer base. As a result of the depressed oil prices, coupled with last year's dramatic devaluation of the Nigerian naira and its subsequent volatility, investor attention has turned elsewhere. These factors have led private equity investors to focus more on exits in West Africa than in previous years, with 11 percent of respondents to the Deloitte report stating that they are more likely to exit than invest in the short term, up from zero percent in 2015. However, the sudden and pronounced impact of the naira devaluation coupled with the oil price decline has reportedly caused a wide bid/ask spread on West Africa divestments, as sellers struggle to come to terms with the significant reduction in the dollar value being offered for their businesses. This behavioral economic factor could weigh on exit deal volumes in the short term, although this should lessen as oil prices start to stabilize.

East Africa has historically not experienced the same level of private equity investment as its neighbors to the west and south, but its more diversified (and generally oil importing) economies are proving attractive to private equity investors who are keen to rebalance away from the West. Ninety percent of private equity investors intend to invest more in the region than they exit, which is widely expected to improve buyer competition for prize assets and add upward pressure to transaction multiples in the region given the imbalance in demand and supply. Kenya has been the biggest beneficiary of this shift in attention, mostly due to its economy's limited reliance on oil—its GDP is predicted to grow in excess of 5 percent this year and to continue that pace throughout 2018.5

Historically, exits have been fairly evenly distributed across business sectors, with the most common sector for exits being financials with only 20 percent of the total, followed by industrials with 15 percent. More recently the industrials sector has become the sector with the most exits, comprising 21 percent of the 2016 exits, more than double the next most common sector (Figure 3). 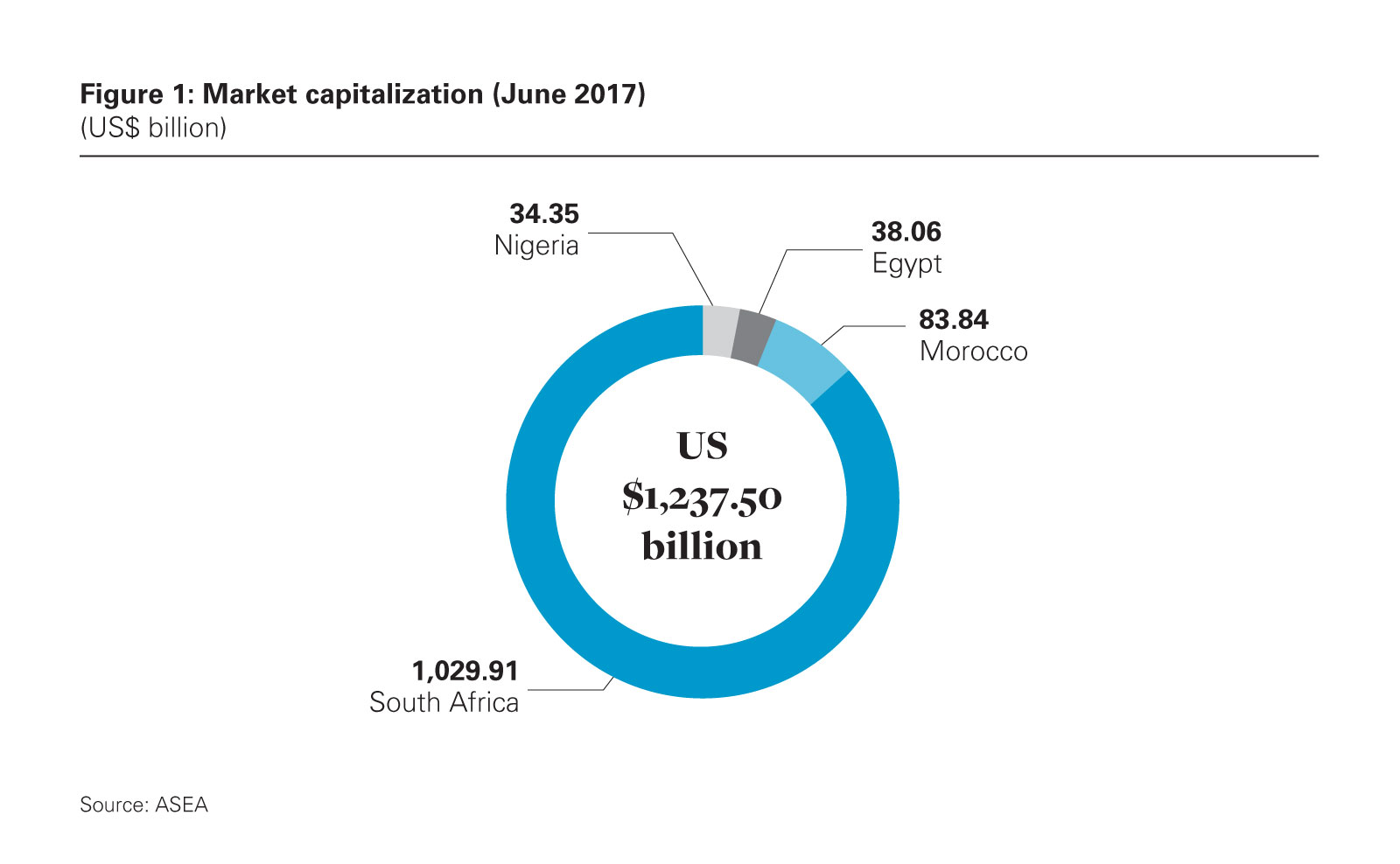 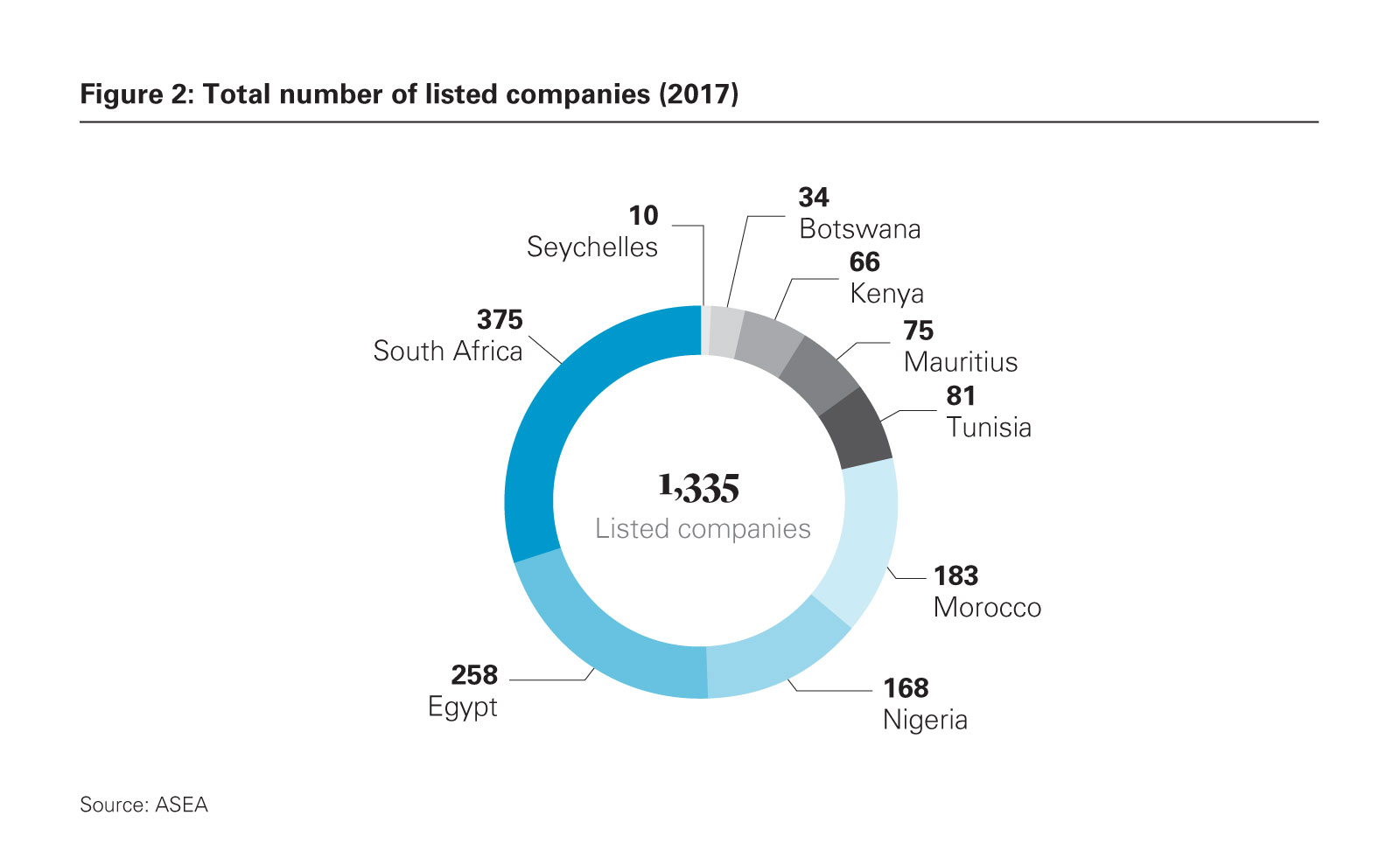 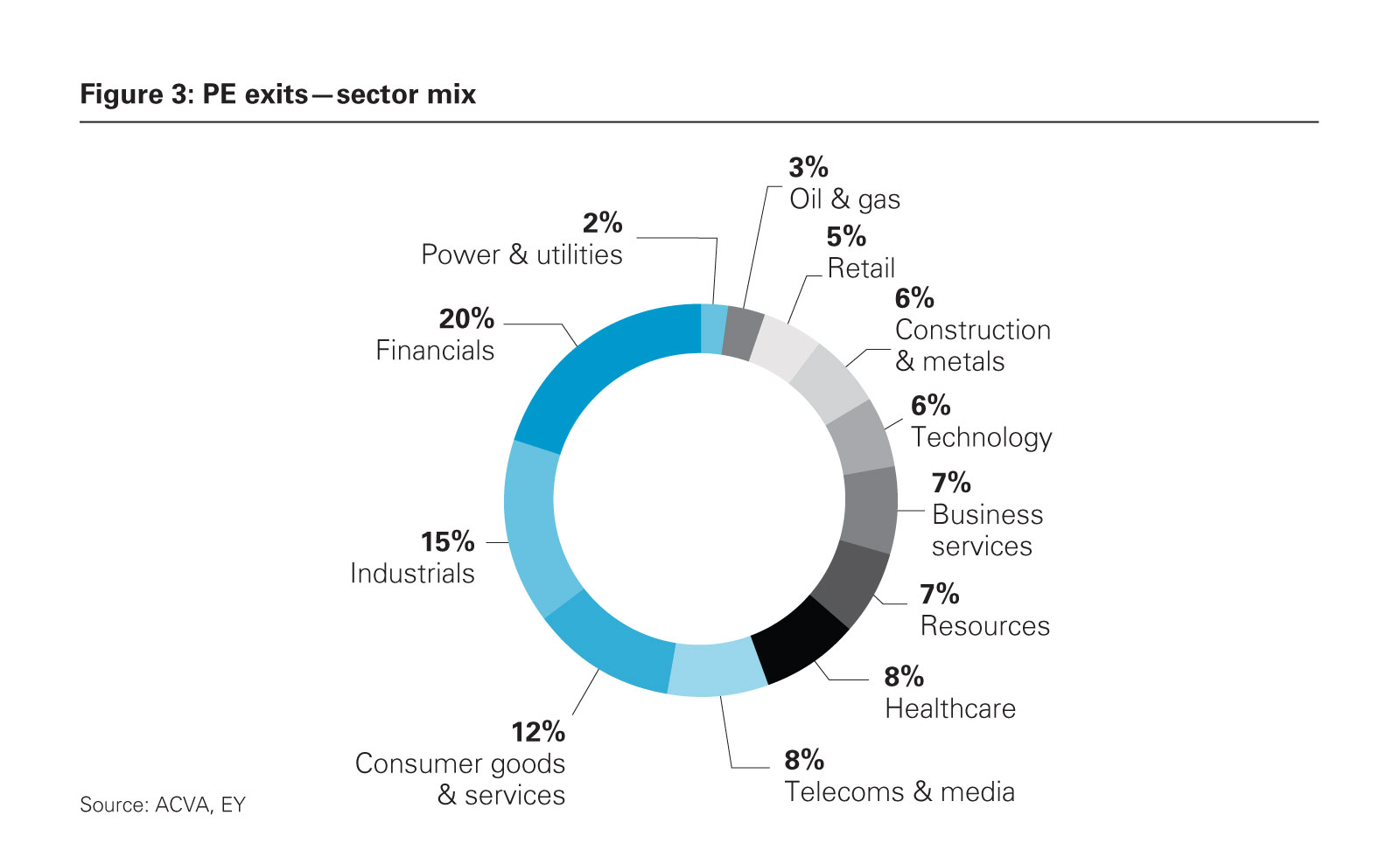 Trade sales to strategic investors continue to be the most preeminent exit route, constituting more than 50 percent of private equity exits in 2015 and 2016. These have also historically generated the highest average returns. This is expected to continue to be the case in the next 12 months, particularly in West Africa, where the expectation is that trade sales will comprise 72 percent of any contemplated exits, possibly due to subdued secondary buyout interest (sales to other private equity firms).

A notable feature of the evolving private equity market is the increased prevalence of auction sales, such as the sale of Brandcorp in June 2016 by Ethos Private Equity to The Bidvest Group following a competitive process. Given the strong fundraising by Africa-focused funds in recent years and the competition for quality higher-value African assets, it is likely that auction processes will become increasingly common.

After trade sales, secondary buyouts, such as the sale of Algeria-based manufacturer Cellulose Processing by Mediterranean Capital Partners to Abraaj in 2016, account for the next largest proportion of exits, at 55 percent of deals surveyed in 2016. This is a dramatic increase from 2015, when only 20 percent of deals were secondary buyouts.6 Another notable trend is that the private equity buyers in these secondary transactions are increasingly international brand names. In 2016, 47 percent of secondary buyers were classed as multinational private equity firms, an increase from less than 30 percent a decade ago. With strong fundraising by international Africa-focused and global funds such as Carlyle and KKR, who made their maiden African investments in 2014, we expect that secondary buyouts will continue to be an increasingly important feature in the African private equity market.

As the quality of assets and deal sizes increase over time, we would also expect to see more sophisticated secondary transaction structures, such as "portfolio" deals, which package up several assets together to be sold to another fund, or deals that involve the breaking up of larger investments into smaller divisions for sale. Given that 75 percent of deals in the first half of 2016 were below US$250 million, it may be some time before the market develops to such a point.

While enterprise value to EBITDA multiples for listed companies in Africa have steadily decreased from nearly 10x in the first quarter of 2014 to less than 8x in the second quarter of 2017, multiples on private equity transactions have followed the opposite path. In 2013, the average private deal multiple was sitting just above 6x, but now these multiples have almost converged on listed company multiples at around 8x. Nevertheless, there still seems to be a fairly heavy risk discount applied to African transactions when these deal multiples are compared with global transactions—since 2012, only 40 percent of private equity transactions achieved a multiple in excess of 7.5x, compared to almost 55 percent globally. This risk discount appears to decrease as transaction values increase, with the average multiple for transactions in the past five years with a deal value exceeding US$250 million being close to 9x.7 The rationale for this correlation of value and multiples is thought to be caused by the added stability and cash generation that come with larger companies on the continent.

In terms of regional performance, as indicated above, transaction multiples in Southern and West Africa are expected to decrease over the next 12 months8 as a result of decreased macro-economic forecasts. In East Africa, multiples are anticipated to increase, but only slightly due to the uptick in interest from private equity being largely cancelled out by the increased cost of debt.

Certain sectors tend to consistently achieve greater transaction multiples in Africa, despite this not being the case elsewhere. The consumer staples and discretionary sectors have recently seen the highest multiples due to evidence of a growing middle class with increasing disposable income. These sectors have also proved themselves to be more resilient across the economic life cycle and a helpful hedge in a depressed oil price environment. Factors such as these have led to more competitive bidding processes between private equity sponsors for assets in those sectors. This was apparent from the Abraaj Group's US$100 million acquisition from Emerging Capital Group in July of the Java Group, a growing coffee shop chain. It is reported that the sellers received 12 non-binding bids for this middle class demographic-focused business, a degree of interest that would previously have been unheard of. Another sector that has fared well for similar macro reasons is healthcare. As the wealth of the people increases, high-quality healthcare is close to the top of the list of priorities.

The combined market value of African-operated companies listed on the London Stock Exchange, which is more than any other African exchange except the Johannesburg Stock Exchange.
African Development Bank

Although IPOs and stock sales on public markets remain some of the most attractive exit mechanisms in the global PE industry, the converse has historically been true in African PE. Fragmented regulation, political uncertainty, underdeveloped capital markets and low levels of market capitalization compared to the developed world result in low usage of IPOs as a PE exit route: Only 1 percent of all 83 PE exits in Africa during 2014–2015 took place by way of IPOs (Figure 4).

Despite a large increase in IPO proceeds raised in 2016, African exchanges saw the lowest volume in IPO activity since 2013, with only 20 IPOs, compared to 30 in 2015.9 The suspension of Nigerian fintech company Interswitch's IPO plans to raise as much as US$1 billion, due to fears over the further weakening of the naira and a general shortage of foreign currency, is a good example of the challenges faced by African PE investors attempting to use IPOs as an exit route. While opportunities outside South Africa's Johannesburg Stock Exchange, Egypt's Cairo and Alexandria Stock Exchanges and Nigeria's Lagos Stock Exchange remain limited, the Abraaj Group's exit of Unimed via an IPO on the Tunis Stock Exchange in May 2016 and Actis's exit of Ugandan electricity company Umeme Ltd. via the Ugandan and Kenyan capital markets in December 2016 show that viable options do exist.

When investors decide to IPO African companies, they often opt for dual listings with international exchanges. The London Stock Exchange (and in particular AIM) is the international exchange of choice, due to its liquidity and the credibility of its governance and disclosure criteria. This is evidenced by the fact that the combined market value of African-operated companies listed in London is US$149 billion, which is more than any other African exchange except the Johannesburg Stock Exchange.

A number of initiatives have been introduced to improve the listing of shares in African companies such as: (i) the East Africa Community (EAC) stock markets integration project; (ii) the introduction of the Growth Enterprise Market Segment by the Nairobi Securities Exchange (NSE); and (iii) new mechanisms to trade and settle ordinary shares of London-listed or dual-listed Nigerian companies. As such initiatives come to fruition, we would expect that exit options on a limited number of exchanges will become more viable. 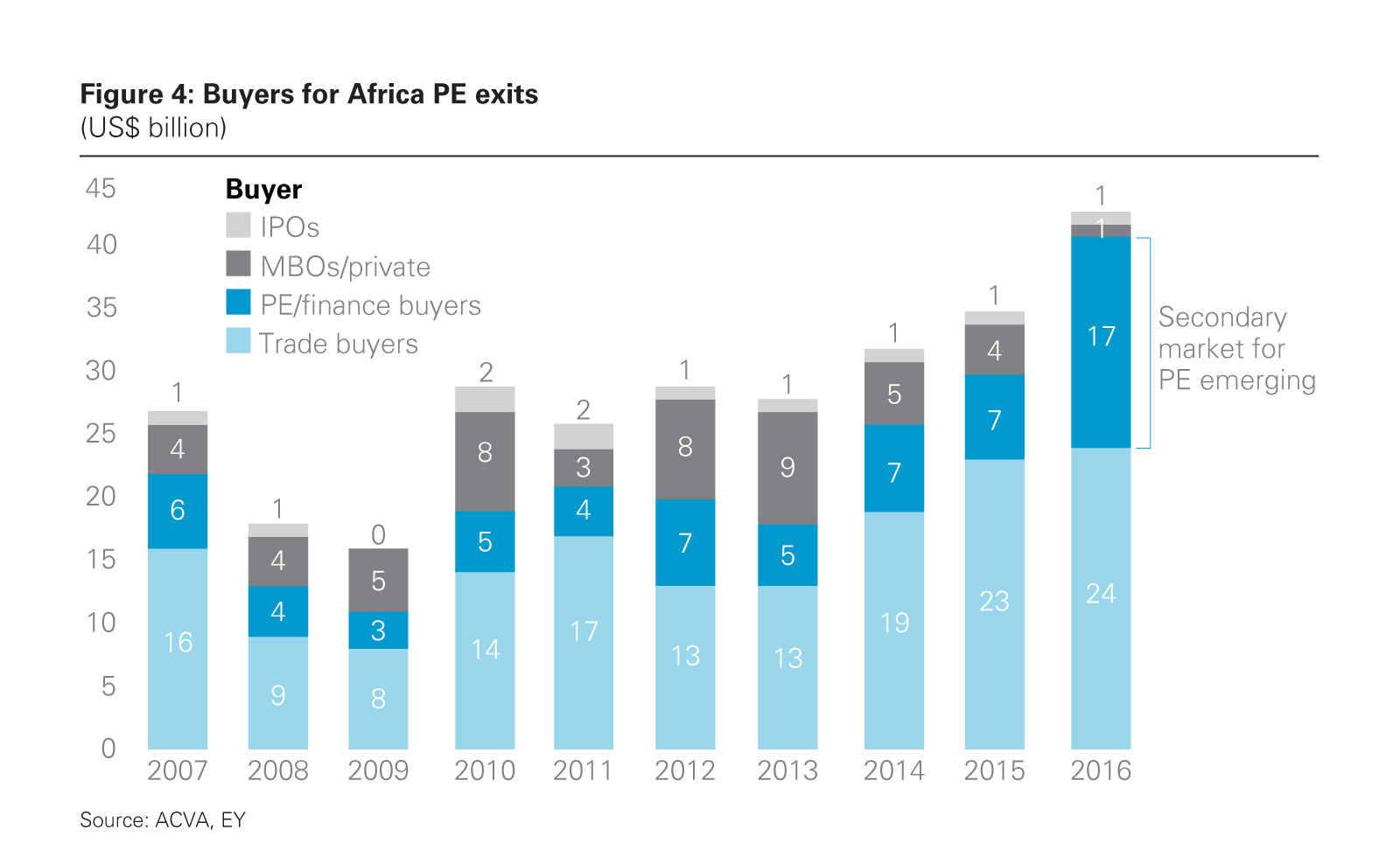 Despite some recent headwinds in certain African regions and sectors, the outlook for private equity investment in the continent is undeniably positive. Almost 90 percent of limited partners interviewed as part of a recent AVCA report confirmed their intention to either increase or maintain their private equity allocation in Africa over the next three years, and only 2 percent believed that over the next decade Africa will be less attractive than other private equity markets. These statistics are a clear indication that investors' concerns with the region, in particular that pivotal concern of how to successfully exit, have substantially improved.

NEXT CHAPTER
Storm clouds or clearer skies for African airlines?