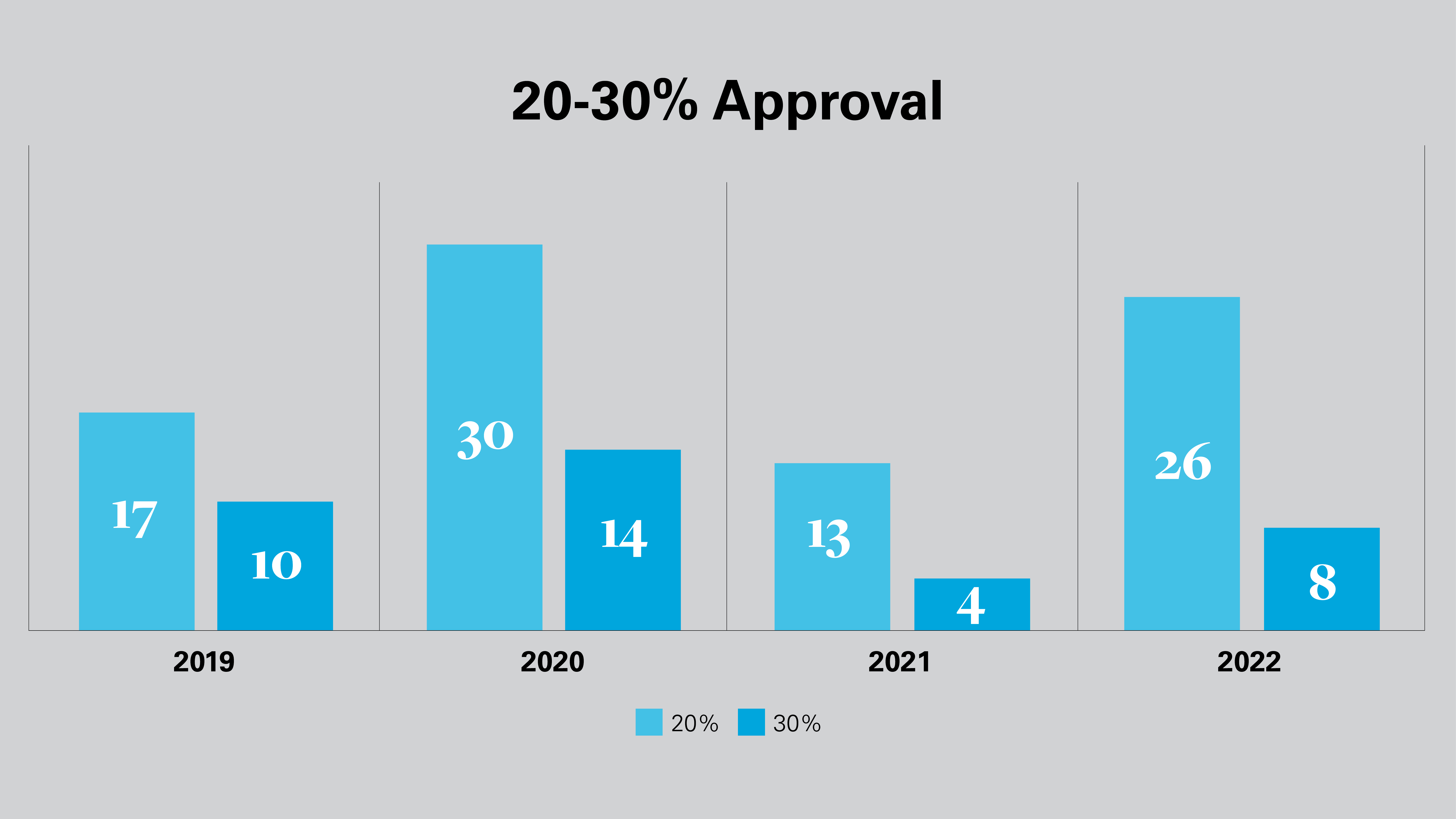 While the total number of shareholder proposals which received greater than 20% support is a small fraction of the total number of proposals, news reports identified a new trend of companies withdrawing proposals that they were not able to garner sufficient support for the day of or shortly before the AGM to avoid losing in a vote at the shareholders meeting.2

Successful pressure campaigns forgo the need for a vote.

Until relatively recently, Japanese companies have generally been thought to have little incentive to negotiate and strike agreements with shareholders making proposals, even when their proposals concern the nomination of outside directors. A key feature of this year's proxy season is the number of proposals withdrawn ahead of shareholder meetings (3 company proposals and 15 shareholder proposals) evidencing the successful wielding of influence by shareholders without the need to compel a vote.3 For Japanese corporates, a less-than-resounding victory—or a narrow loss—can be seen as tantamount to a vote of no-confidence in management. Since it is possible in Japan to agree to withdraw a proposal before it is announced in the first place in the annual meeting notice, we understand that these 18 proposals, which were publically announced as being withdrawn prior to the relevant shareholders meeting, are just the tip of the iceberg.

Daio Paper Corporation withdrew a proposal to reappoint its president, Masayoshi Sako, on the day of its AGM.4 According to the company, based on the status of the voting rights exercised up until the day before the AGM, it was forced to accept that there was not sufficient confidence amongst the shareholders in the proposal, and as a result, Masayoshi Sako voluntarily offered to withdraw his candidacy.5 Fujitec Co., Ltd. also withdrew its proposal to appoint Koichi Uchiyama as a director on the day of its AGM.6 Oasis Management, a Hong Kong fund, started a campaign opposing Koichi Uchiyama's reappointment, pointing out there has been suspicion of non-transparent mixed private and business transactions between Fujitec and Uchiyama, the founder of the company.7  Historically, it has been rare to see a proposal to elect an incumbent director candidate rejected without the support of a majority of shareholders. It is possible that these director candidate proposals were withdrawn to avoid creating such a precedent.8

While companies withdraw proposals to escape a potentially damaging narrow victory or defeat, activists have also been withdrawing their shareholder proposals in situations where management makes concessions in response to the shareholder proposal. Nippon Active Value Fund submitted a shareholder proposal to Mitsuboshi Belting requesting the acquisition of treasury stock and an increase in the amount of compensation available under the performance based restricted stock compensation plan.9 Mitsuboshi Belting then announced it would revise its medium term management plan to increase shareholder returns, including by adopting a consolidated dividend payout ratio of 100%.10 Nippon Active Value Fund's subsequently withdrew its shareholder proposal, and Mitsuboshi Belting's announcement of the revision of its medium term management plan may have influenced the decision to withdraw the shareholder proposal.11 Additionally, Nippon Active Value Fund submitted reports evidencing large holdings in Teikoku Electric on October 15, 2021 and in Ihara Science on March 15, 2021. Although the connection is not certain, Teikoku Electric and Ihara Science announced changes in their capital policies including increases in dividends on May 11, 202212 and May 12, 202213 respectively.

Due to the structure of the Japanese legal system, only matters to be resolved at the general meeting of the shareholders may be the subject of shareholder proposals. Thus, shareholder proposals that are intended as advisory in nature are often submitted as amendments to the articles of incorporation, which require the approval of two-thirds of shareholders. This hurdle, combined with the general preference among Japanese shareholders to support management and the fact that there are certain foreign institutional holders that almost always support management in Japan, has led some to voice the opinion that Japanese corporates have little to fear from activist shareholders. This year's results suggest, however, an increasing practical need on the part of Japanese companies to engage with shareholders who are seeking fundamental changes to the ways in which companies operate. While it is difficult to confirm a trend as such instances of give-and-take are rarely made public, it is possible that the instances of Japanese companies and activist investors reaching agreement will increase going forward.

While voicing any degree of discontent with management has generally been thought of to be the predominant domain of foreign institutional investors (and a few Japanese activists), there are also indications that the diffuse Japanese institutional shareholder base is becoming increasingly skeptical of Japanese-style management. At this year's AGM for Toray Industries, Inc., an advanced textiles giant, Akihiro Nikkaku, its longstanding president, only secured a 63.7% vote for his reappointment.14 Toray suffered a reputational crisis between 2017 and 2018 for a number of instances of misconduct including data falsification and faking product tests.15 However, Toray survived these crises under the leadership of Nikkaku, who was reappointed as a director with a 91.41% approval rate in the 2020 AGM.16 Although Nikkaku's narrow victory during the AGM—which was not the target of any activist campaign or proxy advisors—suggests that domestic institutional holders may be becoming increasingly critical of management.

Silchester International Investors LLP, an England-based investment fund, made a proposal for the first time to each of Bank of Kyoto, Iwate Bank, Shiga Bank and Chugoku Bank to increase their respective dividends to (1) 100% of the annual dividends received from shares the respective bank holds in other listed companies, and (2) 50% of the net income from their respective core banking operations.17 Silchester also criticized the low return on equity (ROE) of the banks and indicated that Silchester will continue to question their abilities to maximize returns.18 In its letters to the banks and their shareholders, Silchester argued that the increased dividends would not adversely impact the banks financial solvency or their ability to act as regional financial institutions because (a) their maintained capital adequacy ratios were above the average for Japan's regional banks (and well in excess of the minimum regulatory requirement) and (b) their poor ROE arose from disappointing earnings, an excessively high cost-income ratio and excess capital retention.19

Some institutional investors supported the proposal, and the approval rate exceeded 20% at Bank of Kyoto, Iwate Bank and Shiga Bank. All of the banks opposed the proposal, arguing that it was a short-term measure, and generally averred that Silchesters proposal did not take into account the banks' unique roles as regional financial institutions by investing in local industries, thus in turn making the pursuit of short-term profit less of a priority.20 Silchester's proposals are notable not only for the supportive votes they received from shareholders in what are fundamentally regional institutions outside the usual ambit of global activists, but because Silchester itself is not a traditional activist. As a value investment fund with approx. USD 40 billion assets under management, Silchester is larger than any traditional activist fund. Silchester's campaign represents both an upward trend in instances of shareholders opposing management's plans, and increased engagement by value investors with Japanese listed companies.

ESG activists continued to call for amendments to the articles of incorporation, such as de-carbonization initiatives, to address climate change risks. In April, Market Force, an Australian environmental NGO, and others submitted shareholder proposals to Mitsubishi Corporation, Tokyo Electric Power Holdings, Chubu Electric Power Company, and Sumitomo Mitsui Financial Group.22 The proposal called for the companies to amend their articles of incorporation to disclose business plan with greenhouse gas emission reduction targets aligned with the goals of the Paris Agreement.23 The proposal also requested the company to provide in their articles of incorporation a requirement to disclose how the company evaluates the consistency of its capital expenditure with its net zero greenhouse gas emissions by 2050.24

On May 11, 2022, the Australasian Centre for Corporate Responsibility (ACCR), together with three major European institutional investors, representing $3 trillion AUM, including France's Amundi, announced that they had submitted a shareholder proposal to Electric Power Development Co., Ltd., known as J-Power, Japan's largest coal-fired power generation company, urging the company to strengthen its de-carbonization strategy.25 According to J-Power, the proposal called for it to amend its articles of incorporation to include a de-carbonization plan in line with the Paris Agreement, and an evaluation and disclosure mechanism to determine whether capital investments are consistent with these goals.26

Companies that have received these ESG-related shareholder proposals have started to respond to ESG-related shareholder concerns more seriously. J-Power announced its short term, mid term and long term goals to reduce CO2 emissions from its domestic power generation business by 7 million tons by FY2025, by 19 million tons (amounting to 40%) by FY2030 and to zero to achieve carbon neutral status by FY2050 compared to the three-year average from FY2017 to FY2019.33  In May, Mitsubishi announced, in its 2024 medium-term management strategy, a plan to invest JPY 1.2 trillion over the next three years in Energy Transformation (EX) related projects.34 Similarly, in April, Sumitomo Mitsui Financial Group announced that it would revise its relevant sector specific policies to no longer provide support for new mining projects or the expansion of existing thermal coal mining projects or infrastructure linked to these business areas.35  Also, in May, Sumitomo Mitsui Financial Group announced it will strengthen its efforts to combat climate change including by expanding its strategy of phasing out of coal-fired power generation and working to achieve net zero greenhouse gas emissions from its investment and loan portfolio.36 According to news reports, Chubu Electric Power Company President Kingo Hayashi explained at the press conference following the AGM, "Environmental issues are the most important management issue."37

Japanese companies have begun to formulate management policies that go further than ever before, such as halting investments in new coal-fired power plants, reducing outstanding loans, and becoming carbon neutral by 2050. While the government's 2020 carbon neutrality declaration is another factor, the pressure from shareholder proposals appears likely to have also helped to prompt some companies to take measures that are even more aggressive.