According to the IMF, sub-Saharan public debt had, by mid-2022, reached about 60 percent of GDP, which is a level last seen in the early 2000s. The composition of this debt has been steadily shifting toward higher-cost private sources, increasing debt service costs and rollover risks, with 19 of the region's 35 low-income countries now considered to be either in debt distress or at high risk of distress.

Following a clear retrenchment from China—the region's largest inbound investor in recent history—policymakers across the region now face a sobering task to set a stabilizing course against the backdrop of geo-economic turmoil. After two decades of robust and ever-growing investment and engagement, President Xi Jinping announced in January 2022 that China would cut the headline amount it supplies to African nations by a third, from US$60 billion to US$40 billion. In the wake of China's retrenchment, opportunities have arisen for increased investment from the states within the Gulf Cooperation Council (GCC) comprising the Kingdom of Bahrain, Kuwait, the Sultanate of Oman, the State of Qatar, the Kingdom of Saudi Arabia and the United Arab Emirates (UAE). For the GCC nations, in particular Saudi Arabia, the UAE and the State of Qatar, the Middle East/Africa corridor has become an increasingly prominent investment strategy over the past few years. Between 2017 and 2019, prior to the COVID-19 pandemic, investment volumes through capex and FDI from GCC nations into Africa increased steadily. Now, as the world rebounds from the effects of the pandemic and manages geo-political instability, GCC investment has continued to climb, reaching US$8.3 billion so far in 2022, which is almost back to pre-pandemic levels. 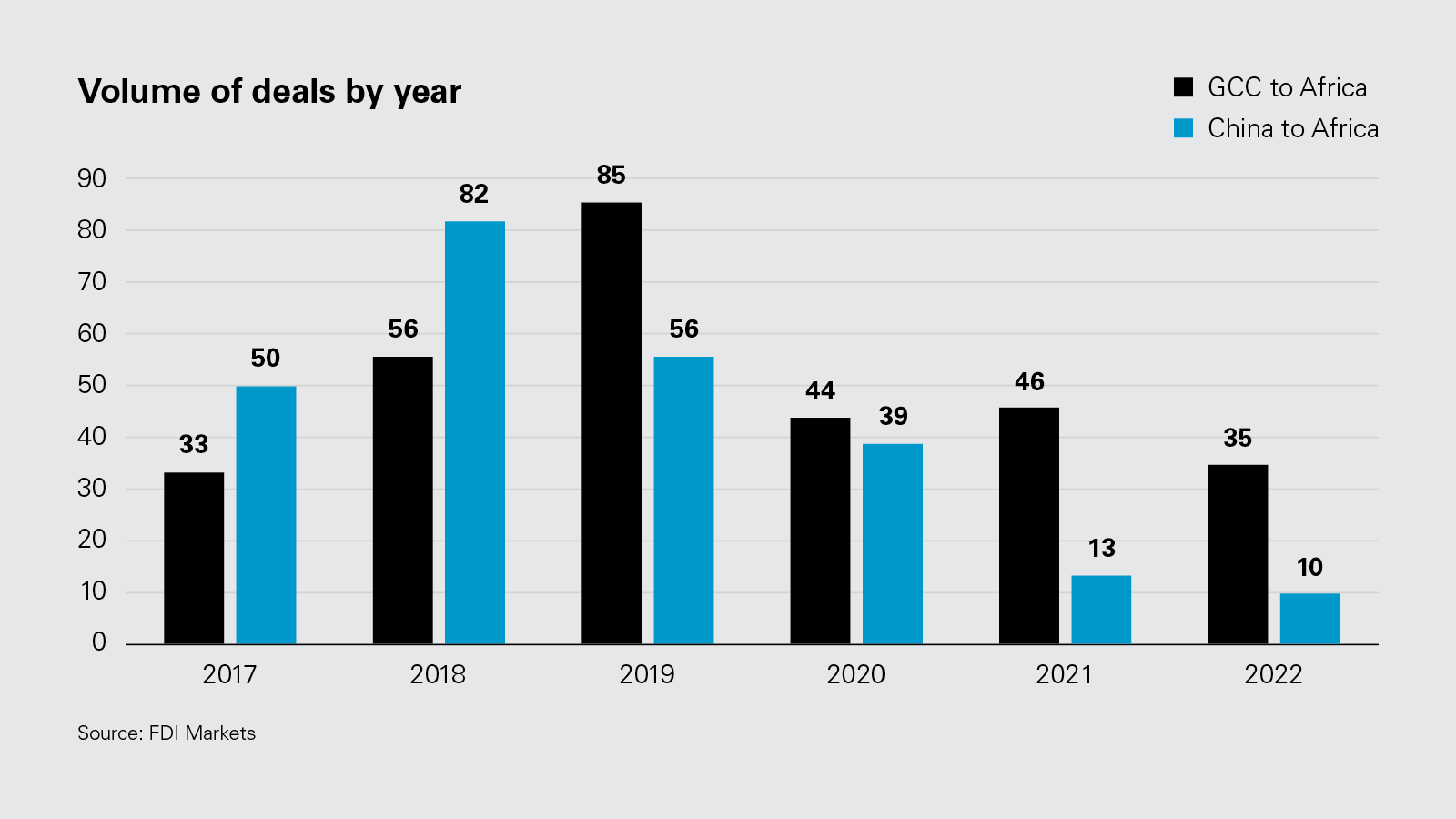 Supported by a strong GDP rise across the GCC in 2021 and a rise in ready capital to deploy, oil prices and commodity prices rose in 2022. Traditionally, ties between the GCC and Africa have been strongest between the GCC and North Africa, notably Egypt—perhaps an obvious link given the cultural and Arabic-speaking connection and relative proximity. However, the scope for direct business between the continent and the GCC has far more potential than this well-trodden path. There is evidence that GCC states are increasingly turning their attention to sub-Saharan Africa. UAE-based Mashreqbank is currently the leading GCC bookrunner in Africa, operating investments in 14 countries across the continent. GCC funders appear to be viewing Africa as a long-term investment prospect, too. While African operations of GCC banks continue typically to be run from the GCC, they are actively seeking partnerships with local lenders.

While many consider GCC states only in the context of oil & gas, these countries have, in fact, had a consistent diversification away from sole reliance on natural resources for years, and have instead been heavily investing in infrastructure, telecoms and food security. Africa has been a large recipient of this focus to date: Qatar-based investment company IAS International has plans to invest in a number of development projects in Central African Republic worth US$1.6 billion, including the development of a tax-free special economic zone; and Saudi Arabia has become one of the biggest acquirers of agricultural land across Africa followed by UAE, Qatar, Bahrain and Kuwait—all states that are increasingly focused on food security and reduced reliance on market imports.

The GCC's burgeoning presence in infrastructure in Africa is particularly notable, with UAE-based DP World operating nine ports and terminals across eight African countries, including Algeria, Angola, Egypt, Mozambique, Rwanda, Senegal, Somalia and South Africa, and has recently acquired a controlling stake in Nigeria's Africa FMCG Distribution Ltd. Investment such as this continue to be a significant contributor to local employment and trade synergies. Sultan Ahmed Bin Sulayem, Group Chairman and CEO of DP World, notes by way of example that the company has "been in Senegal for the last 12 years...[…]... During this period, growth increased, volumes doubled and so did the number of employees."

Critically, GCC investment into Africa does not appear to be limited to ad hoc purchases of strategic assets by state-owned enterprises. The commitment to developing ongoing, sustainable trade is demonstrated by recent diplomatic and policy-driven decisions, too. In summer 2022, we saw the UAE and Kenya issue a joint statement announcing their intention to negotiate a comprehensive economic partnership agreement (CEPA). This is recognized as a precursor to increase the overall value of non-oil bilateral trade between the UAE and Kenya, which rose to US$2.3 billion last year. Private companies are also seeing the benefits of the strengthening relationships, with African businesses increasingly choosing the UAE as a base of operations, with 1,600 new African member companies registering with the Dubai Chamber of Commerce since October 2021, demonstrating the opportunities for such companies to use the UAE as a base for outbound engagement and a platform for utilizing global opportunities for export. 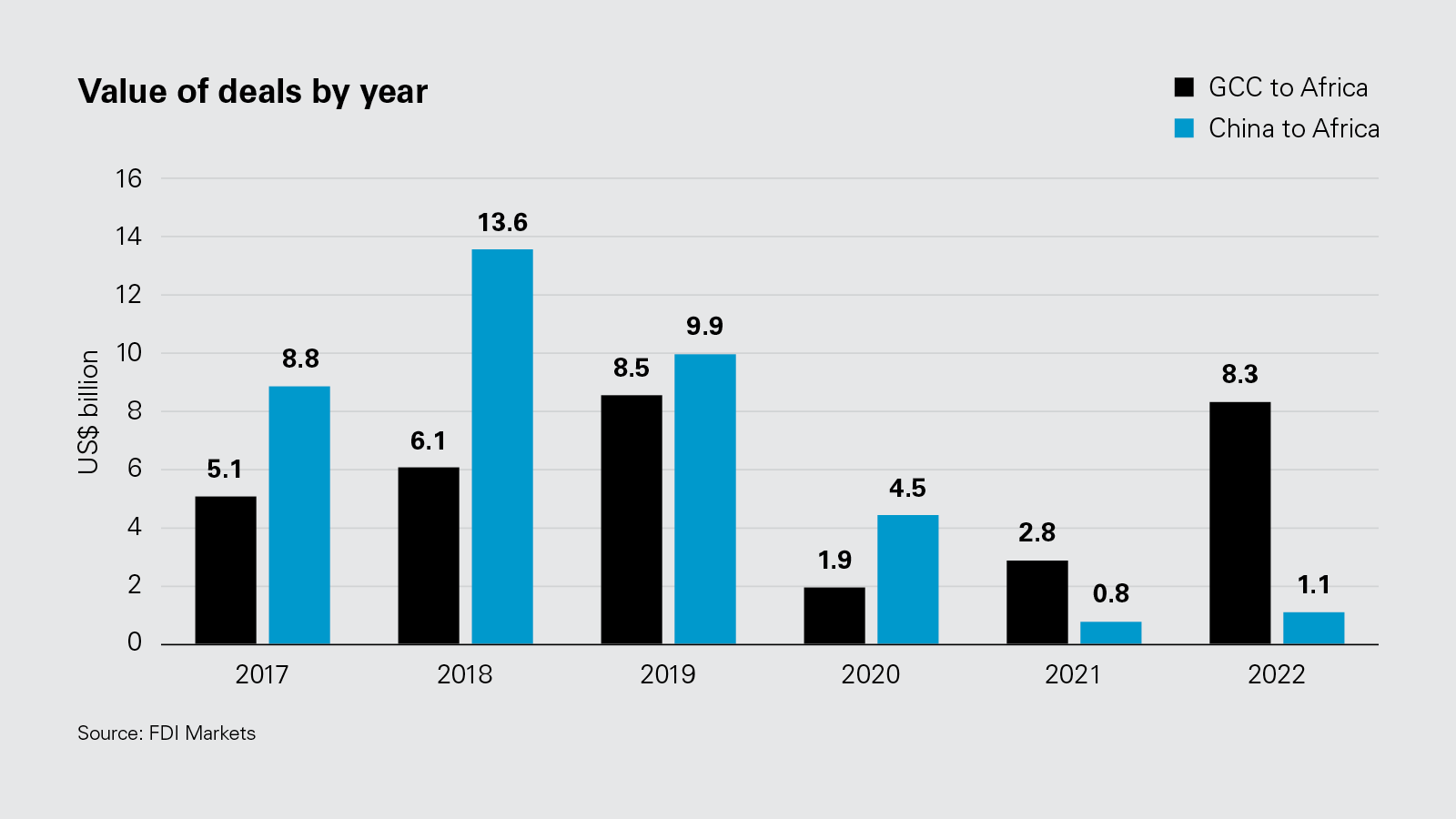 Significant opportunities exist for GCC financial institutions credit providers, both state-owned and private, to establish themselves as cornerstone lenders across sub-Saharan Africa. The GCC banks and funds have exceptionally strong liquidity. For instance, Moody's Investment Service notes that UAE banks had liquid assets at 38 percent of total assets as of December 2021, up from 36 percent as of December 2020. Opportunities are clear. Africa's vast infrastructure and energy demands offer a bountiful supply of project opportunities that, according to the African Development Bank (AfDB), will need to be funded largely with private sector funding. Also according to AfDB, the continent's infrastructure financing needs will be as much as US$170 billion a year by 2025, with an estimated gap of approximately US$100 billion a year. Yet according to McKinsey & Co, 80 percent of infrastructure projects in Africa fail at the feasibility and business-planning stage. Also, according to McKinsey & Co, the UAE stands second only to the United States (and slightly ahead of China) in terms of appetite for investment in African infrastructure.

With pressure on debt levels rising, the need to restructure and refinance existing debt, and demand in the international capital markets contracting, debt markets remain the key focal point for supporting these requirements. The traditional higher returns available from lending across Africa may also prove attractive in an environment where local spreads in the GCC are relatively low.

The Middle East/Africa corridor makes much sense from a proximity, travel and logistical perspective. Policy-makers appear aligned that across the two regions, closer ties benefit both parties. While the undoubted increase in transaction flow between the two regions in the past few years shows that these political ties are bearing fruit, there remain a number of areas of potential where the Middle East/Africa corridor appears to offer the easiest—yet underused—path to success. As a multitude of African economies are in need of significant inbound investment, why can't this be serviced by a Middle East region with significant capital to deploy, its own strategic policy aims to satisfy and a sophisticated and well-developed Islamic finance market, which could easily be utilized for the burgeoning and under-serviced African Muslim population? This could be a perfect partnership.