Smallholder farmers in eastern Africa are facing unprecedented challenges as a multi-layered crisis takes hold of the region. The worst drought in 40 years, resurgent conflict in Ethiopia, inflation running in excess of 30 percent in some countries: The UN estimates that 100 million people in the Horn of Africa will be at risk of acute food insecurity by the end of 2022.

In the longer term, the region is faced with the challenge of producing and accessing sufficient food, without further degrading the already exhausted land on which so many lives depend. Development investments need to consider the impact of agriculture on the environment, as well as the role of healthy habitats in mitigating climate change.

Projects that protect and restore the environment often improve carbon storage, principally through sequestration in soil and vegetation such as grasslands or forests. Done right, farmers' and communities' work to protect habitats can result in an improved and diversified household income, for example when farmers' yields increase after adopting climate-smart agriculture practices or forest dwellers are able to harvest and sell forest-friendly produce such as wild coffee. This can provide a powerful incentive to further protect global public goods, as more money can be made by protecting the natural habitat than further eroding it.

Such nature-based solutions now attract significant investment from donors, from global climate funds, and from investors seeking access to carbon credits that are generated through the measurement of avoided emissions and sequestered carbon. The voluntary carbon market is growing rapidly, projecting a 15-fold increase in demand to 2030 and a 100-fold increase in demand to 2050. Prices have surged, from just over US$3/tonne of carbon dioxide-equivalent (tCO2e) three years ago, to approximately US$10/tCO2e in 2022, and the market is estimated to be worth upwards of US$50 billion/year by 2030.

However, carbon offsetting is controversial and cumbersome, and the revenue from carbon credit sales often does not filter down to the local communities working to protect their ecosystems. 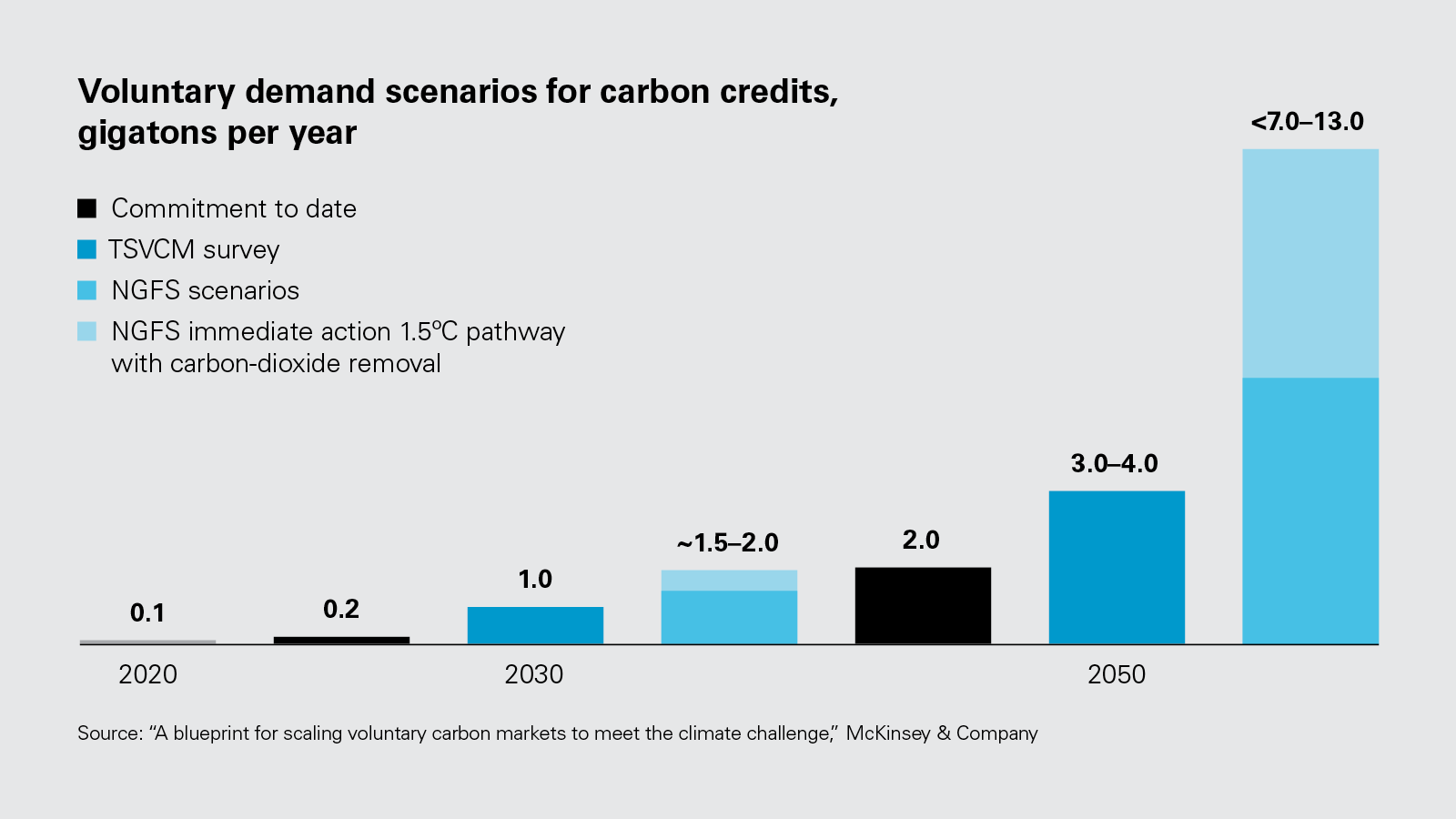 The carbon credit revenue flow to the local government and communities is to be welcomed. There is a tangible return for the efforts to preserve the public goods that are the forests and water towers of Southwest Ethiopia. The forest cooperatives are using these returns to further invest in their communities: flour mills, coffee processing equipment and manufacturing fuel-efficient stoves. From this point of view, the system is working.

However, the carbon market remains opaque and volatile, with little transparency on pricing and carbon brokers' mark-up. There are moves in the sector to address this, with the Integrity Council for the Voluntary Carbon Market aiming to develop principles on issues such as additionality—reductions achieved by a project need to be "additional" to what would have happened if the project had not been carried out—and the permanence and measurement of carbon emission reductions, plus a set of threshold standards that will build trust in the market and unlock additional investment to deliver climate impact.
Well-documented criticisms point to the license carbon offsets can give to polluters to continue burning carbon. Businesses need to assess carefully the types of companies with which they want to prioritize trading. An important criterion is companies that take action to reduce emissions before seeking to deploy offsets. Offsets are a legitimate part of a strategy to achieve net-zero, if they are structured so that rewards flow directly to communities working hard to protect the environment.;

At COP26, leaders of some of the large global climate funds commented that one of the blocks to getting climate action funding down to the community level was a "lack of bankable projects." But evidence so far simply does not bear this out. The success of the Bale Eco-region REDD+ project is a case in point: It shows that with the right approach to community mobilization, transparency and inclusion on decision-making and innovation in strengthening livelihoods, the benefits of climate and carbon funding can reach deeply into forest communities.

The carbon market is complex, volatile and potentially very risky, in creating smallholder dependencies on corporate and other agents. We need to progress cautiously in promoting this market as an alternative to other land uses.

There are many players in the carbon market who can act to safeguard communities involved in carbon offset schemes. Project developers, including NGOs, have a crucial role to play in promoting the diversification of livelihoods to ensure communities have multiple incentives to reduce carbon emissions, and alternative sources of income if carbon credit revenue is delayed or less than anticipated. In Bale, for instance, communities also earn income from coffee production, livestock production and climate-smart agricultural intensification, all of which reduce the need to clear forest.
It could be counterproductive if communities became overly dependent on carbon income and the associated market and corporate actors, or if efforts to sequester carbon happened without equal attention being given to more productive livelihoods. It is interesting to think about carbon as a value chain in its own right, but this could risk the commodification of community and environment and a shift to "carbon farming" at the expense of sustainable food production.

Investors and funding vehicles should make their processes less difficult to navigate. At present, the global climate funds, and the requirements around the carbon market risk making the sector inaccessible to indigenous forest communities. Current efforts to introduce standards through the Voluntary Carbon Market Integrity Council and associated core carbon principles are welcomed, but the focus of this initiative is about market "integrity" and predictability for buyers and traders, rather than producers, and reinforces the sense of community being viewed as collateral rather than market agents.

Local and national governments should better regulate the emerging carbon subsector to ensure benefits flow to communities and that land rights are not infringed. As the value of carbon credits rises, so too does the value of land where carbon credits are generated. There are many speculators keen to make a profit from the buoyant market, and there is a risk that vulnerable communities or those with limited land rights, particularly women, could be exploited. Investors, too, should pay careful attention to the quality of carbon credits, and the benefit-sharing mechanisms, to ensure the credits they buy are ones that reward those doing the lion's share of the work to reduce emissions: local communities.

Between 2012 and 2021, Farm Africa and its partners, with funding from the Norwegian government, worked to deliver an ambitious integrated landscape management project that reduced deforestation and boosted the livelihoods of local communities in the Bale Eco-region in Southwestern Ethiopia.

Over the project period, deforestation in the Bale Eco-region was 58 percent lower than it was projected to be in the absence of the project. This avoided deforestation resulted in more than 25,000 hectares of forest being saved and carbon emissions being reduced by 10.5 million tonnes of CO2. The project helped more than 34,000 members of 64 forest cooperatives increase their incomes from the sale of forest-friendly products and REDD+ carbon credits earned by the reduced emissions.

Our project worked on multiple fronts. The first is community mobilization— equipping community groups and local government authorities with information and capacity to collaboratively set the rules for participatory forest management. Together, the community and local government agreed upon how to monitor the forest, how to take action on transgressions such as illegal logging and how to share the benefits of sustainable forest management. The government-owned Oromia Forest and Wildlife Enterprise (OFWE) and the community-based forest management cooperatives agreed to share the earnings from the sale of carbon credits in a 40:60 ratio.

Second is diversified livelihoods that use non-timber forest resources to sustainably increase income, in this case including high-value organic forest coffee, honey and gum products. Incomes, excluding the revenue from carbon sales, increased by 143 percent over the course of the project, providing a powerful incentive to continue protecting the forest. These products need buyers, and the project also connects producers to new markets, nationally and internationally. Substantial carbon credit revenue flowed to the cooperatives and local government forest authorities. We are now in the process of managing the sale of a further 2.8 million tCO2e of carbon credits generated in 2020 and 2021, with the prospect of a considerably higher price, given the buoyant market.

And, there is a crucial scale-up objective. This has been the first REDD+ project in Ethiopia to issue and sell carbon credits, and the lessons have been instrumental in guiding the development of the jurisdictional phase—the process by which the experience of the project is incorporated into regional and national policy.