The interests of the GCC countries in cooperation with Africa have historically been shaped by their relatively one-sided and short-term economic goals. But propelled by the COVID-19 pandemic, food supply issues and the changing regional geopolitics in recent years, the dynamics have been shifting toward deeper, longer-term—and mutually beneficial—commitments between the Gulf States and the African continent. Currently, all GCC States, barring Saudi Arabia, have signed and ratified bilateral investment treaties—BITs—with African countries, strengthening economic ties while pursuing diversification strategies beyond traditional sectors and addressing current critical issues, such as food security.

Over the past decade, the UAE has emerged as one of the largest investors into Africa among the GCC states, and is the fourth-largest investor globally into Africa—after China, Europe and the United States. In 2018 alone, the Abu Dhabi Fund for Development also financed more than 66 projects in 28 African countries, valued at US$16.6 billion. Between January 2016 and July 2021, the UAE invested US$1.2 billion into sub-Saharan Africa, a staggering 88 percent of the GCC total during that period.

Saudi Arabia—another big investor into Africa—has also made significant investments in energy and mining projects, and particularly into Africa's agribusiness, in response to growing food security concerns in the region. 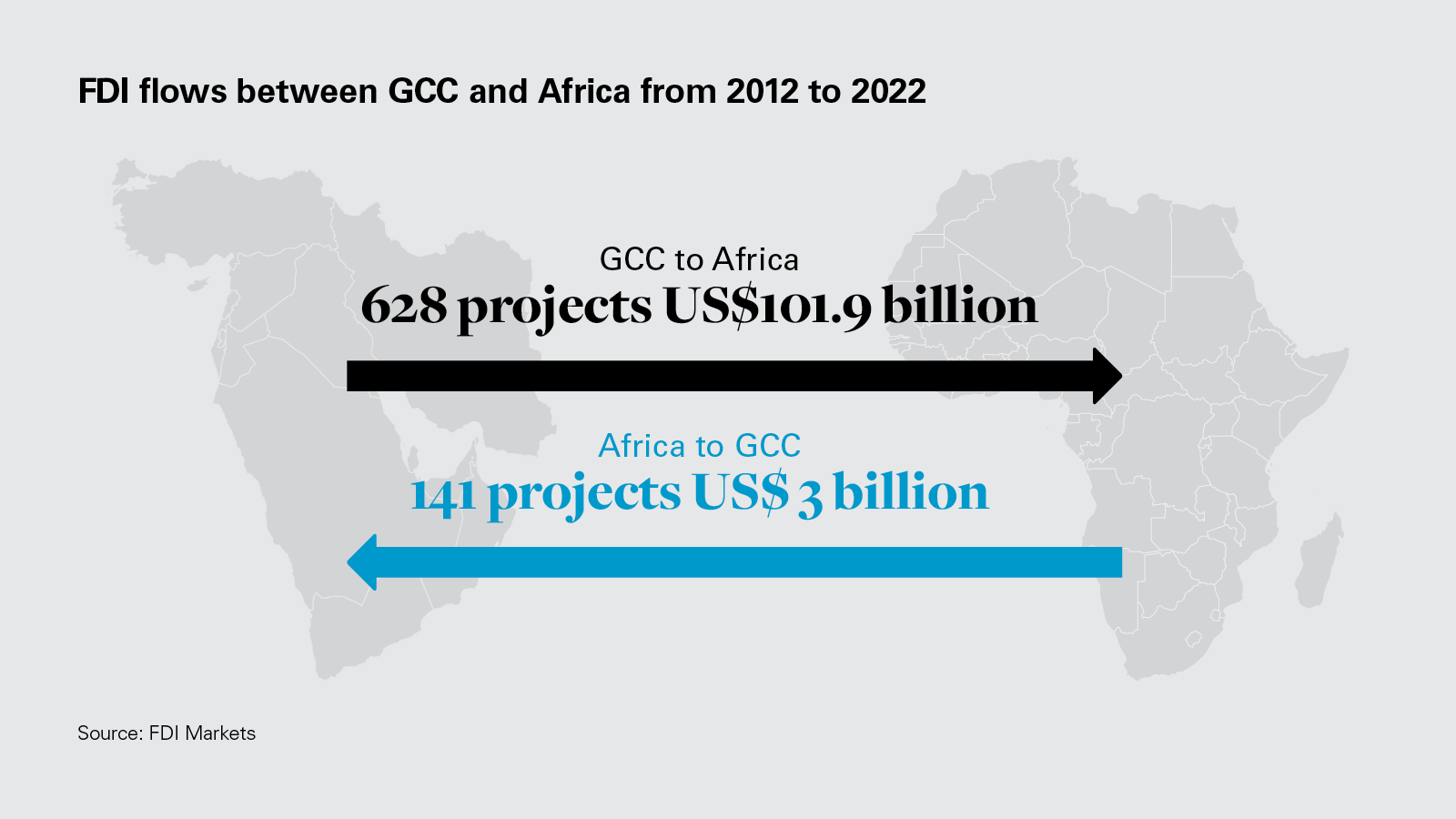 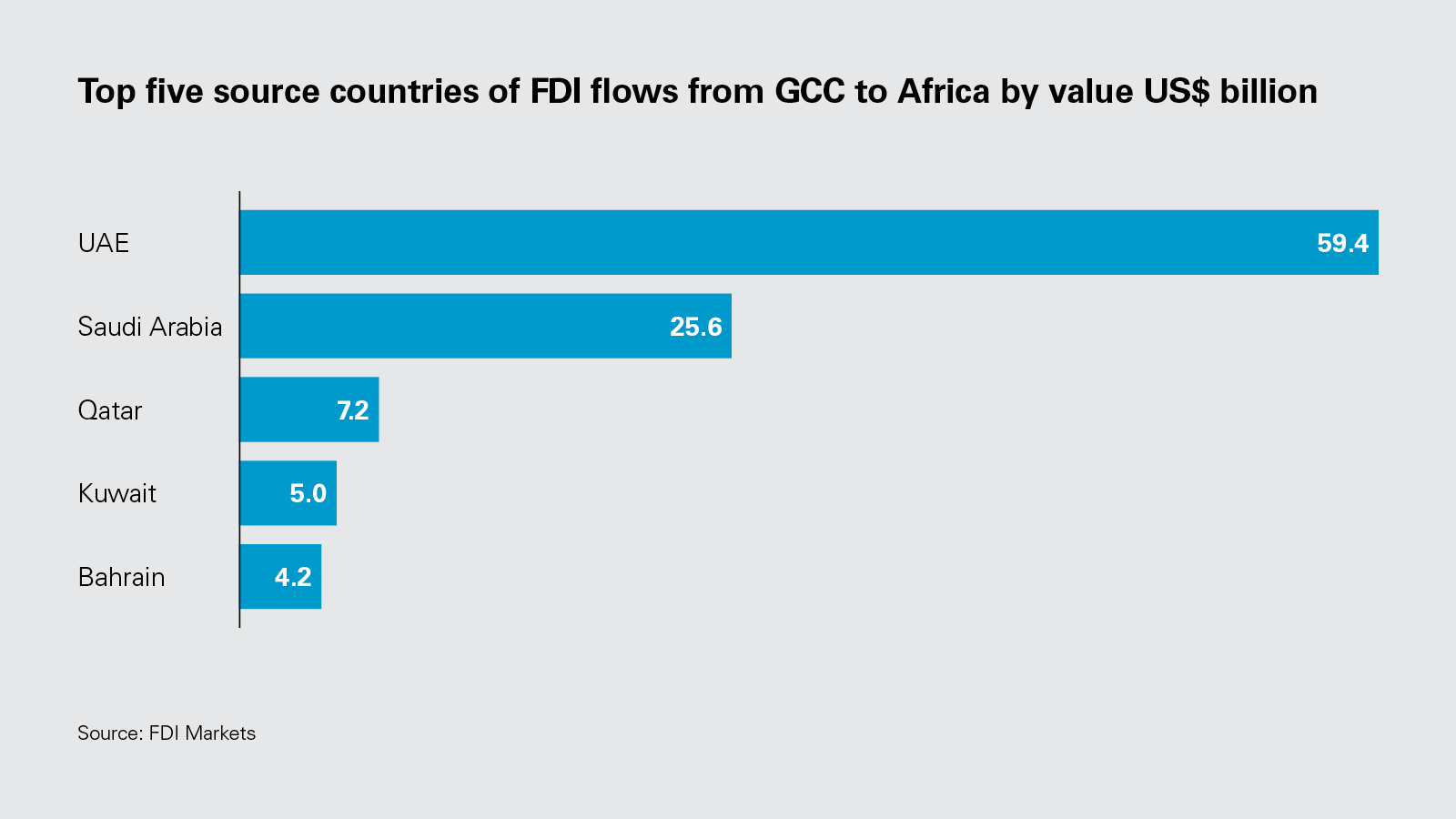 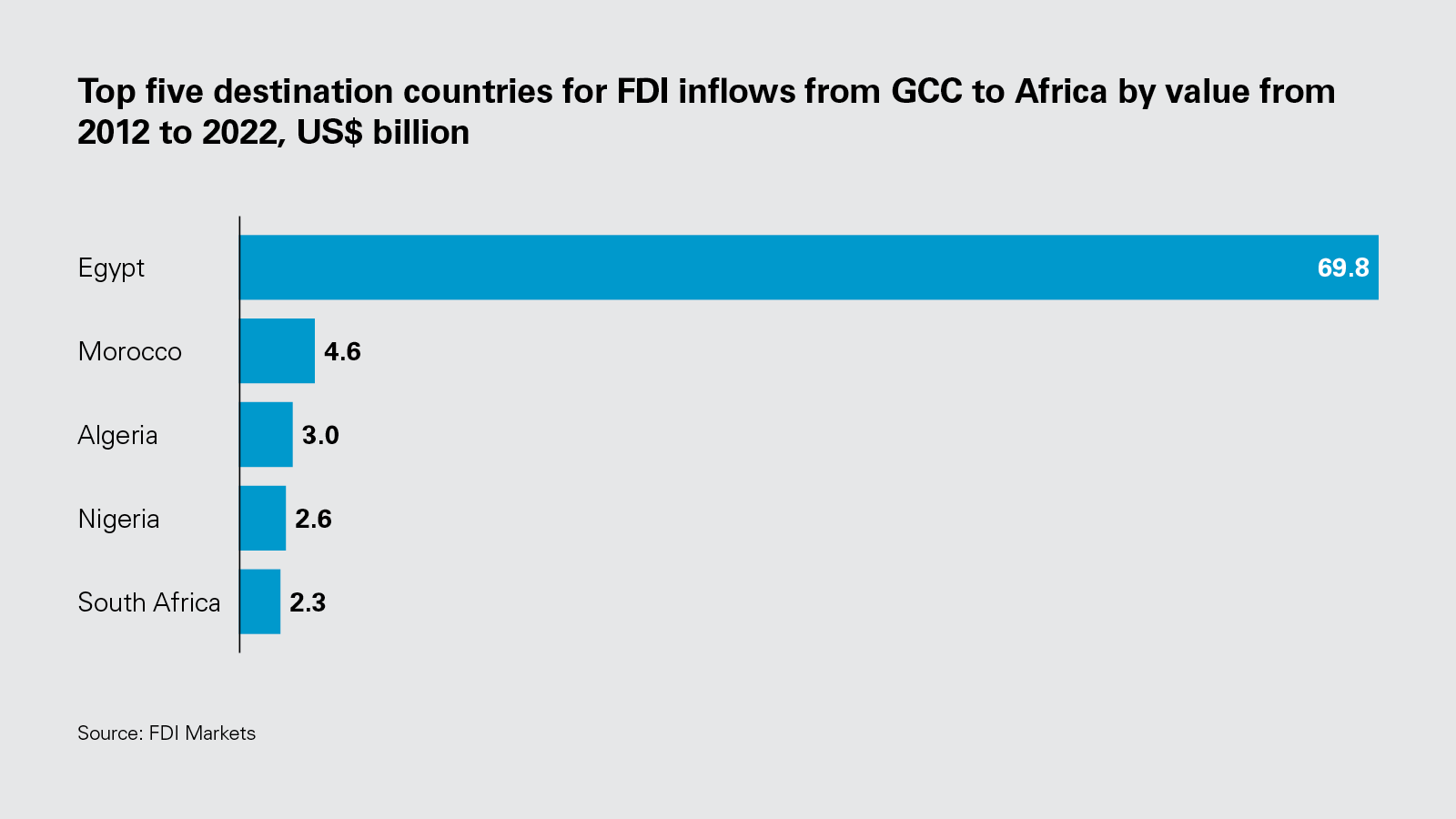 View full image: Top five destination countries for FDI inflows from GCC to Africa by value from 2012 to 2022, US$ billion (PDF) 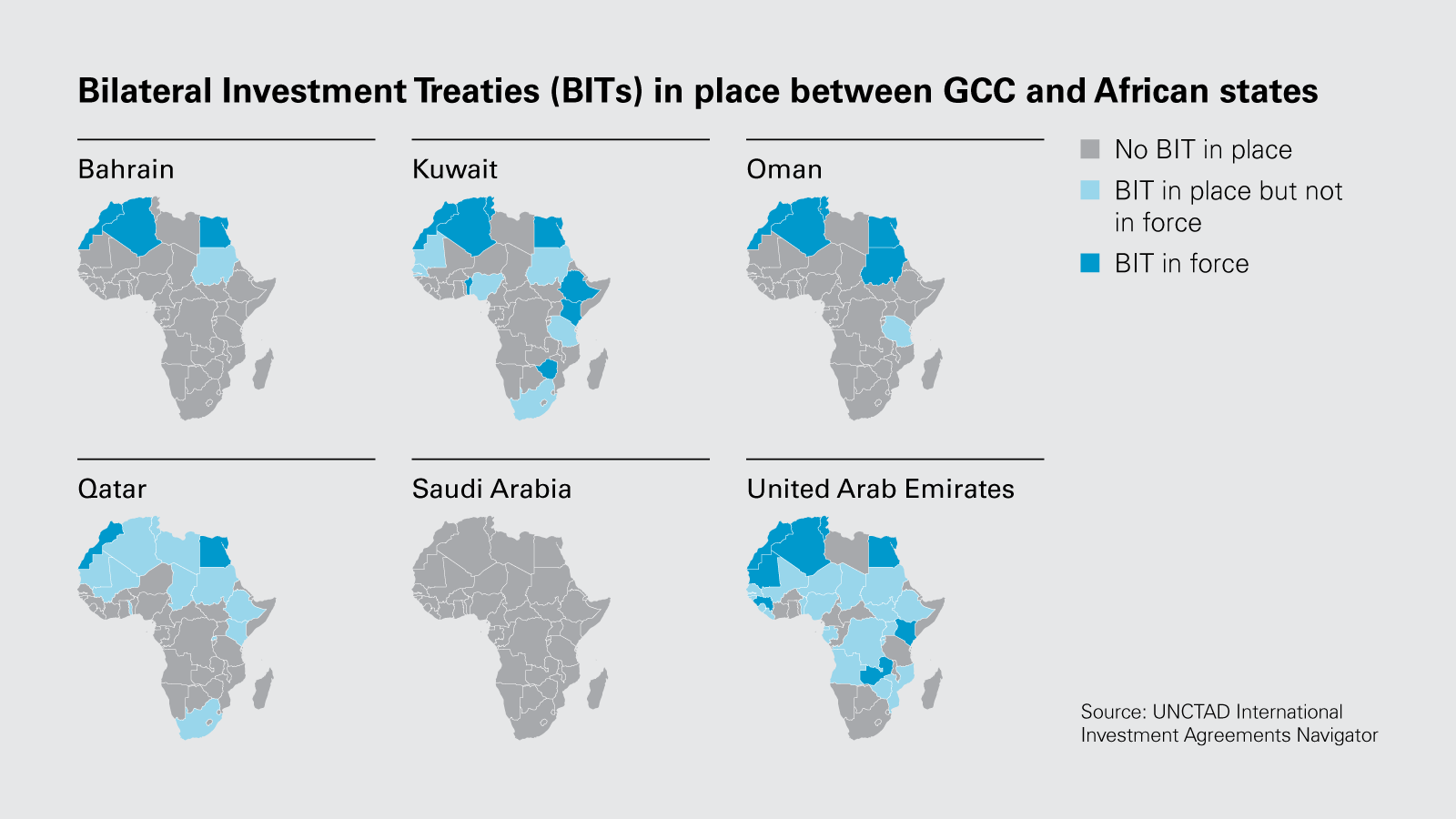 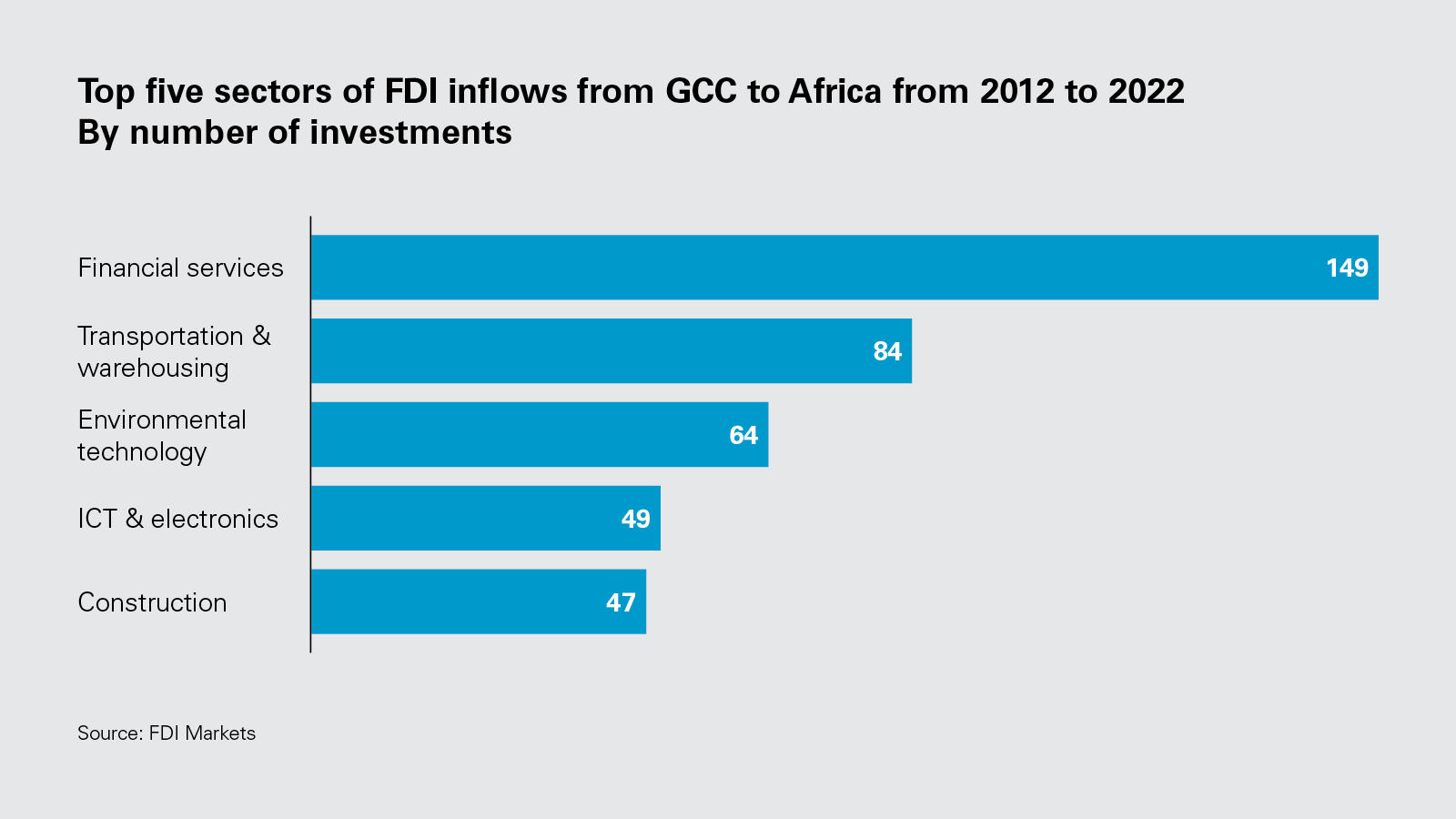 View full image: Top five sectors of FDI inflows from GCC to Africa from 2012 to 2022 By number of investments (PDF)

Food security remains a major concern for the region and GCC states have historically been exploring agriculture projects in Africa for at least a decade. The capital-rich and financially robust GCC countries have been adept at managing and mitigating their food supply risks. But the 2007-08 food crisis—during which more than 30 countries imposed food export restrictions—and the current disruption of global food supplies caused by Russia's actions in Ukraine, have changed this. Climate change is also expected to add further pressure on the Gulf's food supplies. Against this dire canvas, Africa—with its vast amounts of arable land—could double or triple its cereals and grains output, which would add 20 percent to worldwide output. Similar increases are possible with horticulture crops and livestock.
Zambia and Kenya have been devising terms for land use that meet both local and investor needs. Saudi Arabia has also invested heavily in Africa's agribusiness, especially in East Africa, with a portfolio thus far of roughly two million hectares.

Besides sovereign investments, recent years have seen GCC corporates investing in assets that align well with their businesses. Qatar Airways invested US$1.3 billion in 2020 to acquire 49 percent of RwandAir and a 60 percent stake in the new Bugesera International Airport near Kigali, its planned pan-African hub.

The Qatar Investment Authority anchor US$250 million investment into the Virunga Africa Fund I is further evidence of Qatar's growing interest in Africa. In 2021, Qatar also acquired a 50 percent stake in 800 MWs of renewable projects in South Africa and Zambia, and made a US$200 million investment in fintech platform Airtel Mobile Commerce.

Abu Dhabi Ports, collaborating with Hutchison Port Holdings, is searching for projects in Africa, too. As a starting point, their focus is to elevate the Port of Dar es Salaam in Tanzania as a world-leading trade hub.

Given that the GCC states need to diversify away from hydrocarbons, and Africa's increasing appeal, it seems likely that investment between the Gulf countries and Africa investment is likely to continue to grow. 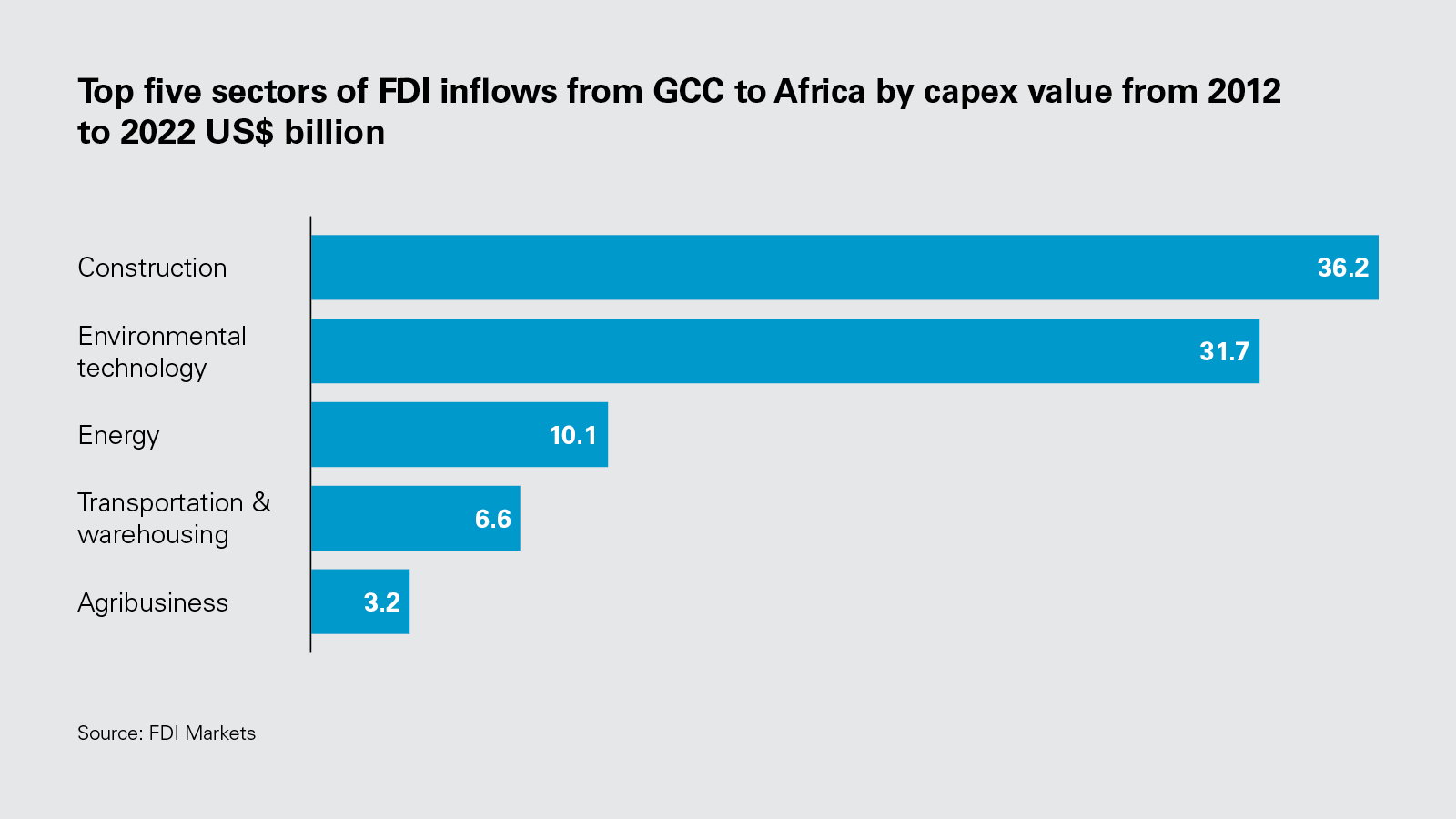 View full image: Top five sectors of FDI inflows from GCC to Africa by capex value from 2012 to 2022 US$ billion (PDF)