Slightly fewer respondents expect commercial bank lending to rise in 2022. Indeed, 10 percent of EMEA-based respondents expect it to decrease. With the exception of top-tier credits, commercial banks have become notably more cautious about lending to the aviation sector since the onset of the pandemic. "Funding for projects has been withdrawn by banks because of the insolvencies that have been reported in the past couple of years," notes a managing director at a US-based private equity fund.

COVID-related contraction is not the only factor causing banks to think twice about backing aviation. The managing director of an EMEA-based bank says: "Investing in global markets is quite risky. There are many geopoliticalensions between countries and this could affect the profits of each sector differently. We are investing in assets that we can exit from within a shorter timeframe."

The respondents most likely to point to an increase in commercial bank lending are those based in North America (88 percent) and in APAC (87 percent), where regional banks have a strong track record of financing aviation in their domestic markets. Export credit agency (ECA) financing—a vital prop for the aviation sector when times are hard—is expected to increase by 84 percent of EMEA-based respondents, but only 68 percent of those based in North America.

Funding from alternative capital providers (non-bank lenders, including private equity) is expected to rise by 78 percent of North American respondents and 77 percent of APAC-based respondents. Meanwhile, capital market funding is generally expected to grow less strongly than other sources in 2022. This view is most notable among EMEA-based respondents, only 50 percent of whom expect capital market funding to rise—the lowest proportion for any geography and for any funding source. 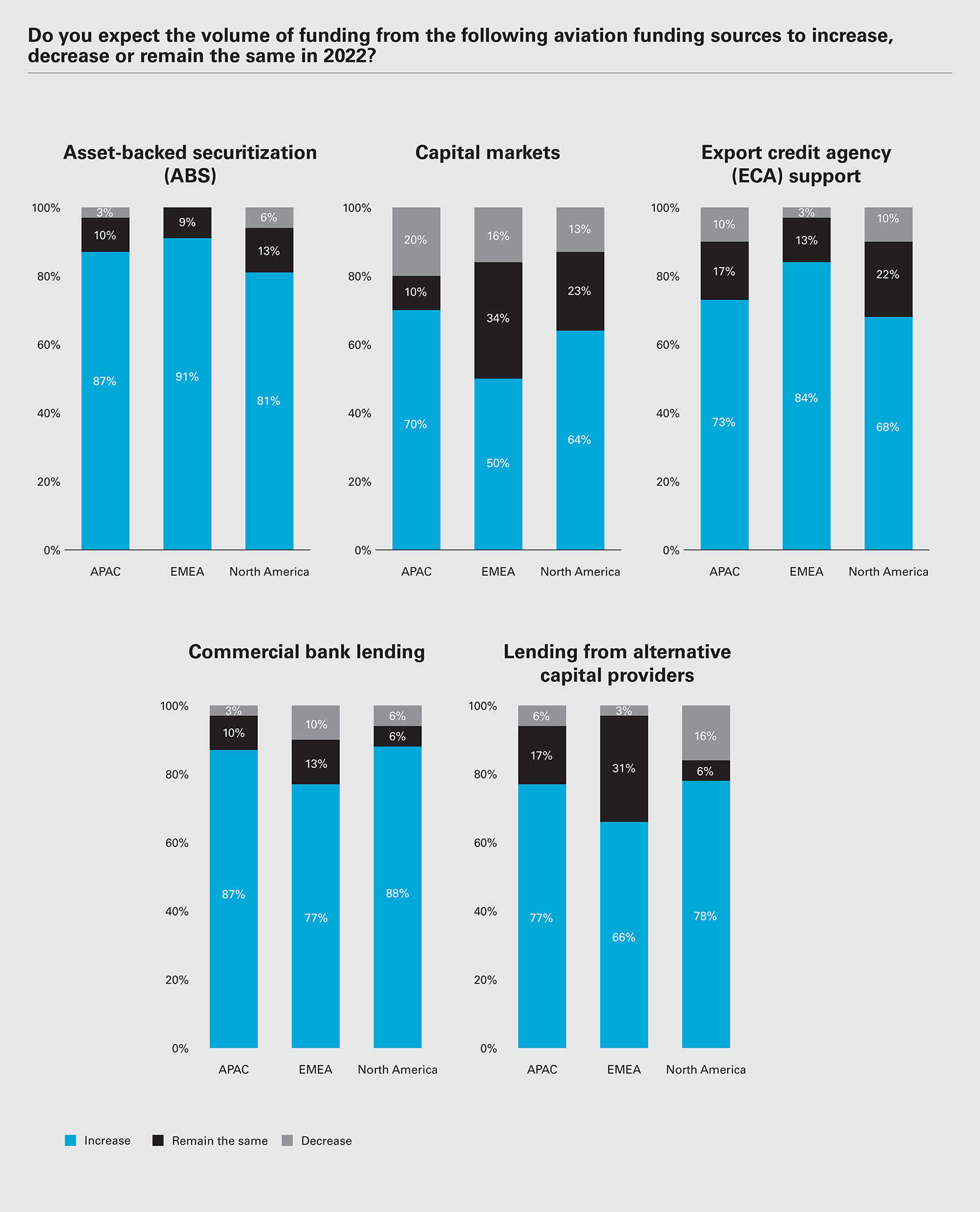 View full image: Do you expect the volume of funding from the following aviation funding sources to increase,decrease or remain the same in 2022? (PDF)

Diverse funding sources have so far played a big part in helping the aviation sector to weather the COVID-19 crisis.

But what if access to debt and equity markets were to narrow?

EMEA respondents most commonly say they would be most likely to replace capital market funding with loans from financial institutions (53 percent), followed by sale and leaseback financing, and loans from alternative capital providers. Private equity is increasingly active in this sphere. "Capital into new European markets has proved to be favorable, and we want to source new opportunities in 2022," says a partner in an EMEA-based private equity firm.

Half of APAC respondents also expect they would look to loans from alternative capital providers, but they also see financing supported by ECAs as a likely avenue (47 percent). The latter of these options is the most popular route selected by a majority of North American respondents (52 percent). Meanwhile, EMEA respondents are more likely than either APAC or North America–based respondents to look to JOLCO (Japanese operating leases with call option) transactions, which give lessees the option to buy the aircraft either during the lease or at its end. 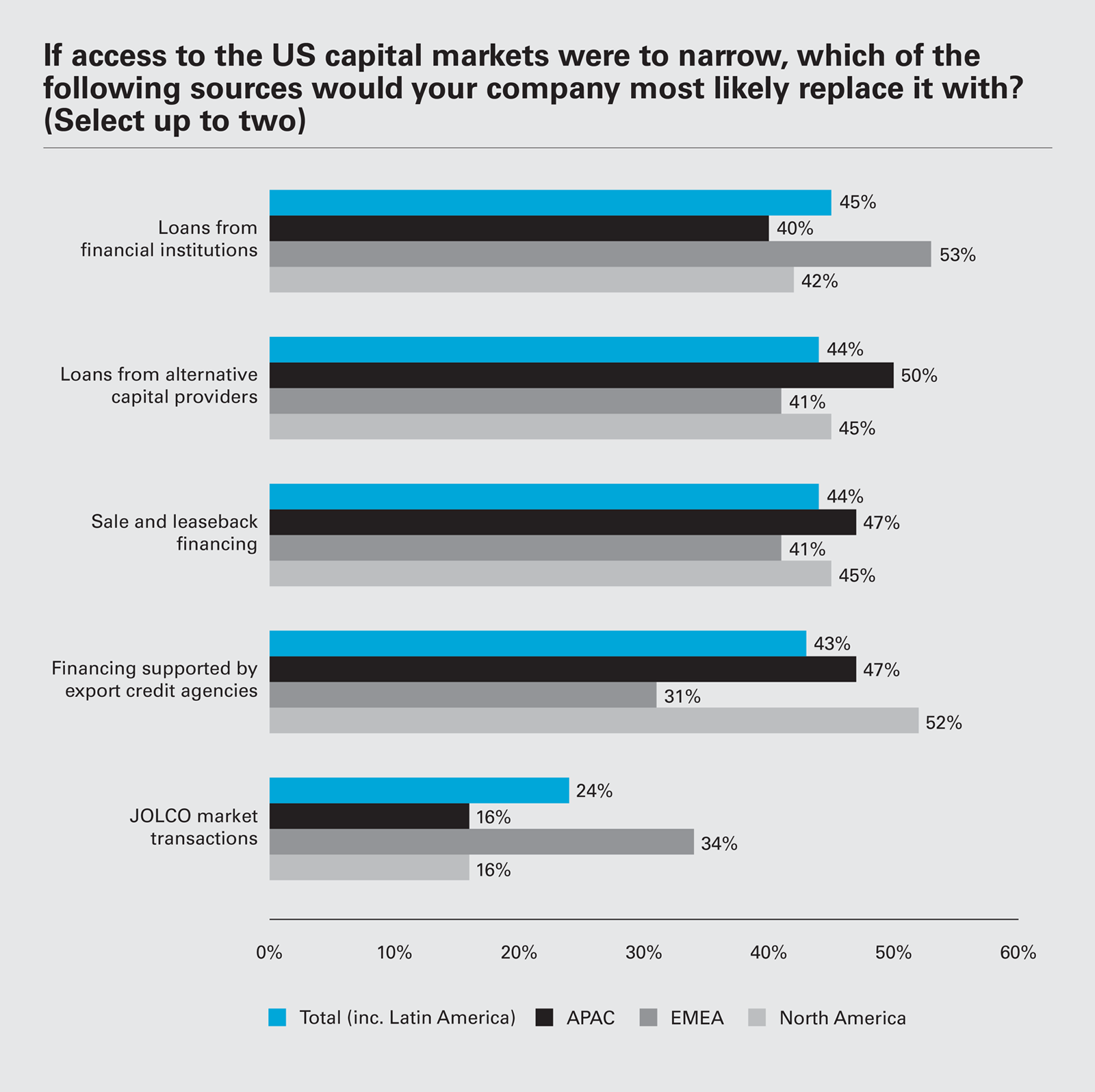 View full image: If access to the US capital markets were to narrow, which of the following sources would your company most like replace it with? (PDF) 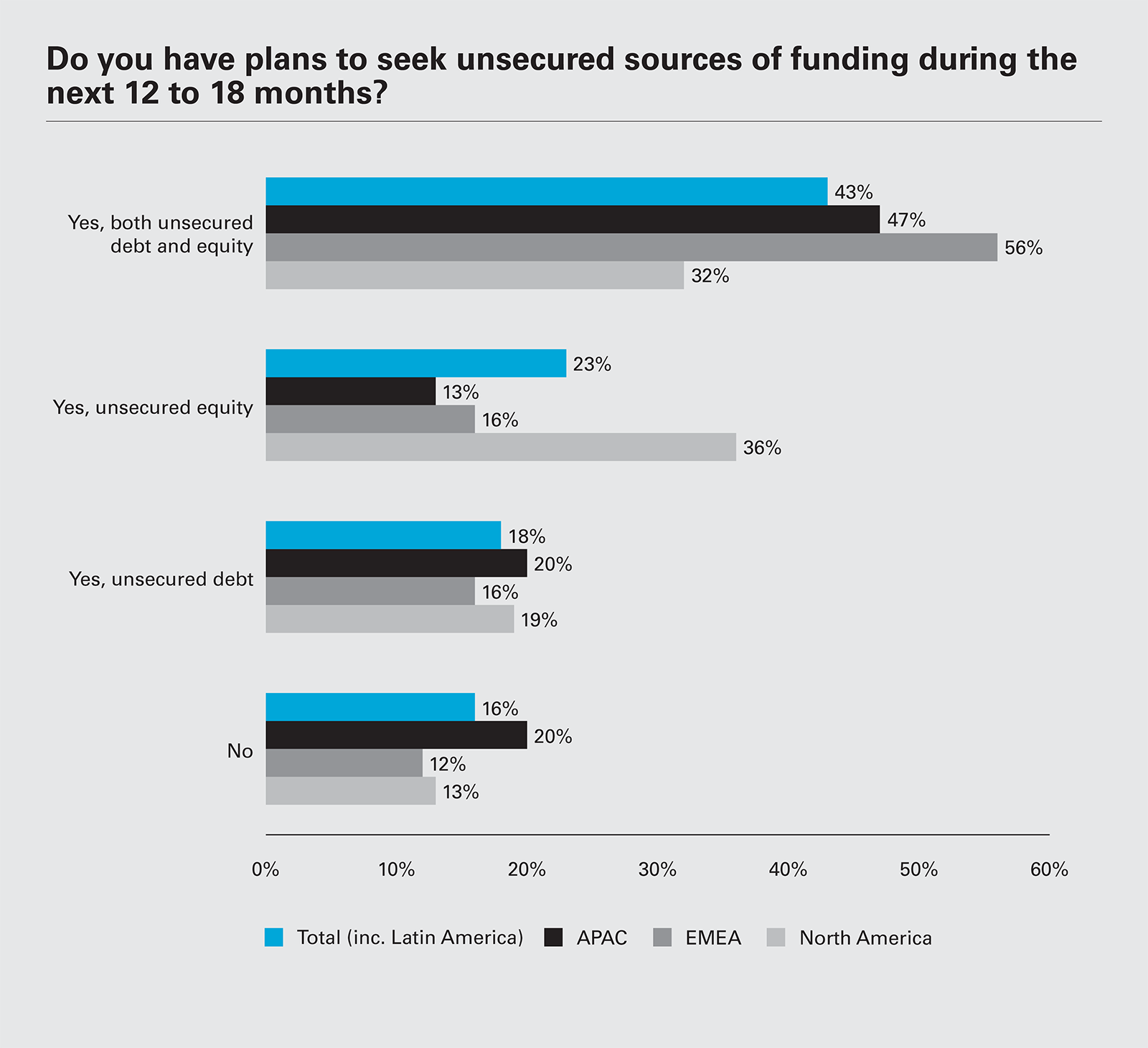 View full image: Do you have plans to seek unsecured sources of funding during the next 12 to 18 months? (PDF)

The aviation sector is also increasingly using new types of collateral to unlock funding. A majority of respondents say they will seek or provide financing secured by miles programs or slots/gates and routes in the coming 12 to 18 months. Banks and export credit agencies were most likely to do so, with 100 percent of those surveyed from both categories responding that they were planning to seek or provide financing using either or both options. Financing secured by slots/gates or routes was especially popular with private equity funds and other alternative capital providers—50 percent planned to engage in this type of financing in the next 12 to 18 months, with an additional 40 percent planning to engage in financing secured by both miles programs and slots/gates or routes. 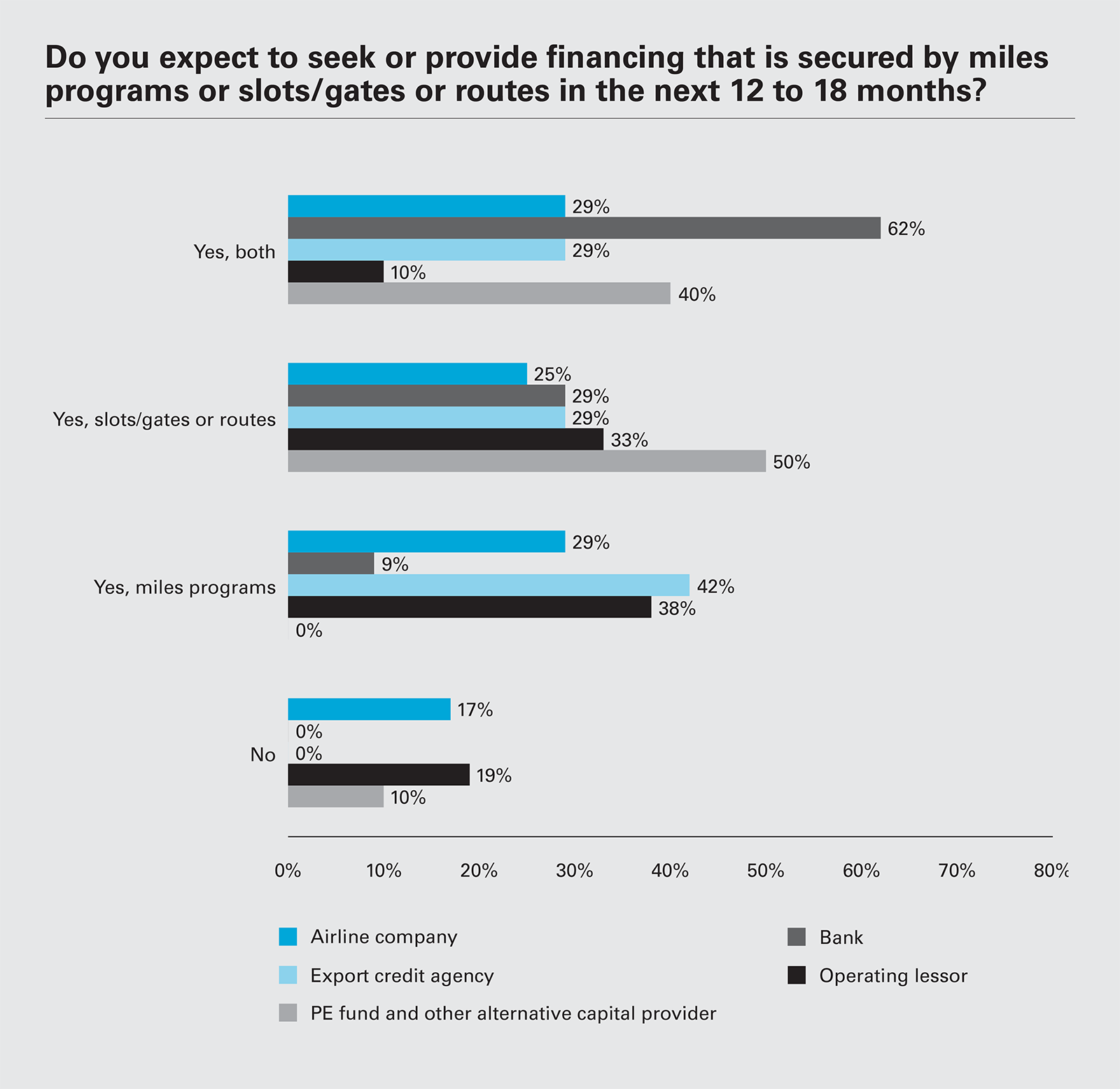 View full image: Do you expect to seek or provide financing that is secured by miles programs or slots/gates or routes in the next 12 to 18 months? (PDF)