Few respondents report that there is too much capital and liquidity. Historically, excess liquidity has created problems for the aviation sector, as it did toward the end of the cycle immediately pre-pandemic—a period that saw a flood of new Chinese leasing capital chasing a finite number of assets, pushing up the price of aircraft.

Private equity funds and other alternative capital providers are the respondent group most likely to say that there is too much capital and liquidity (with 30 percent saying this, compared to 7 percent of airline companies and no banks surveyed in agreement with this). With more than US$1 trillion of dry powder looking for deals, this point of view may not be surprising. 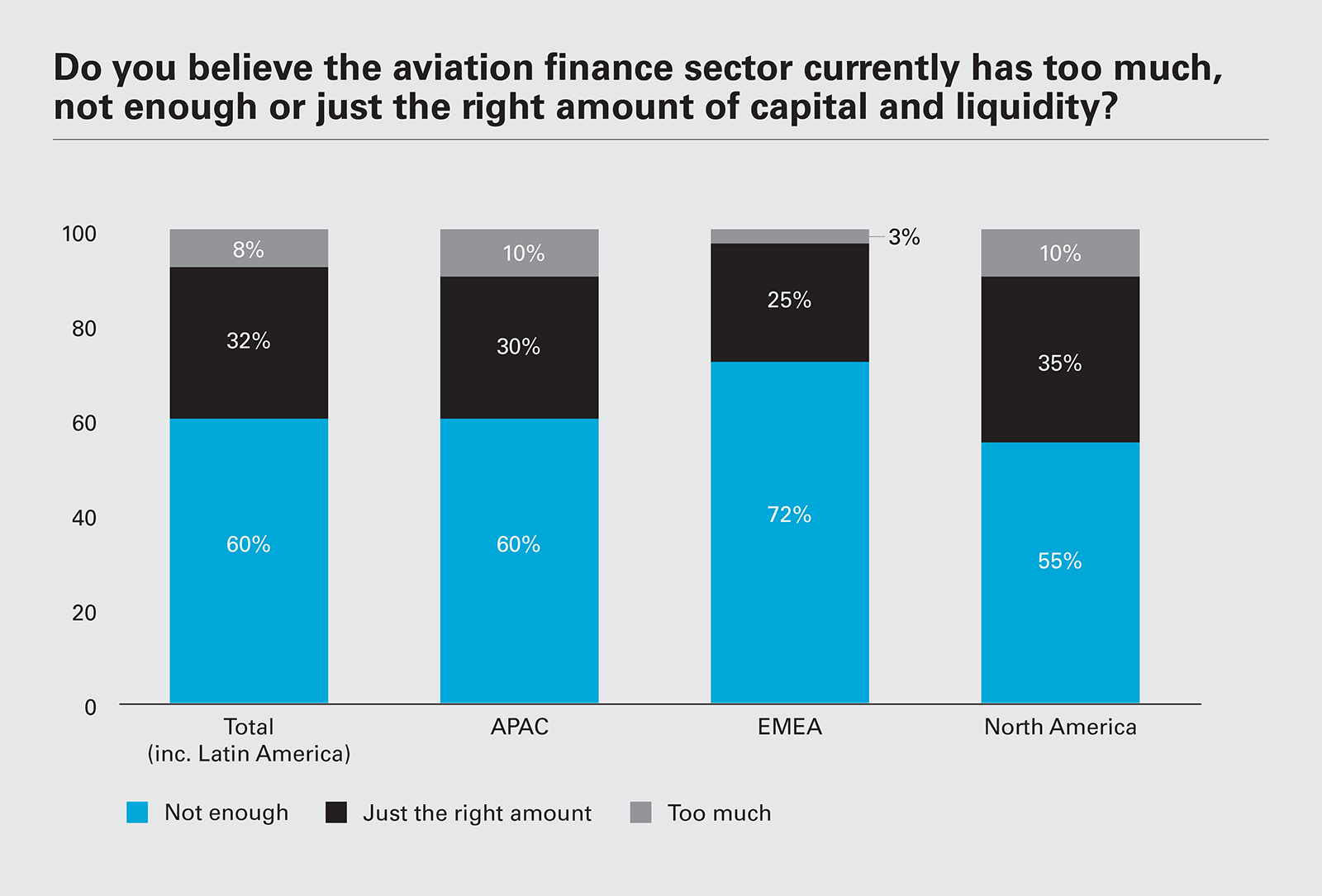 View full image: Do you believe the aviation finance sector currently has too much, not enough or just the right amount of capital and liquidity? (PDF) 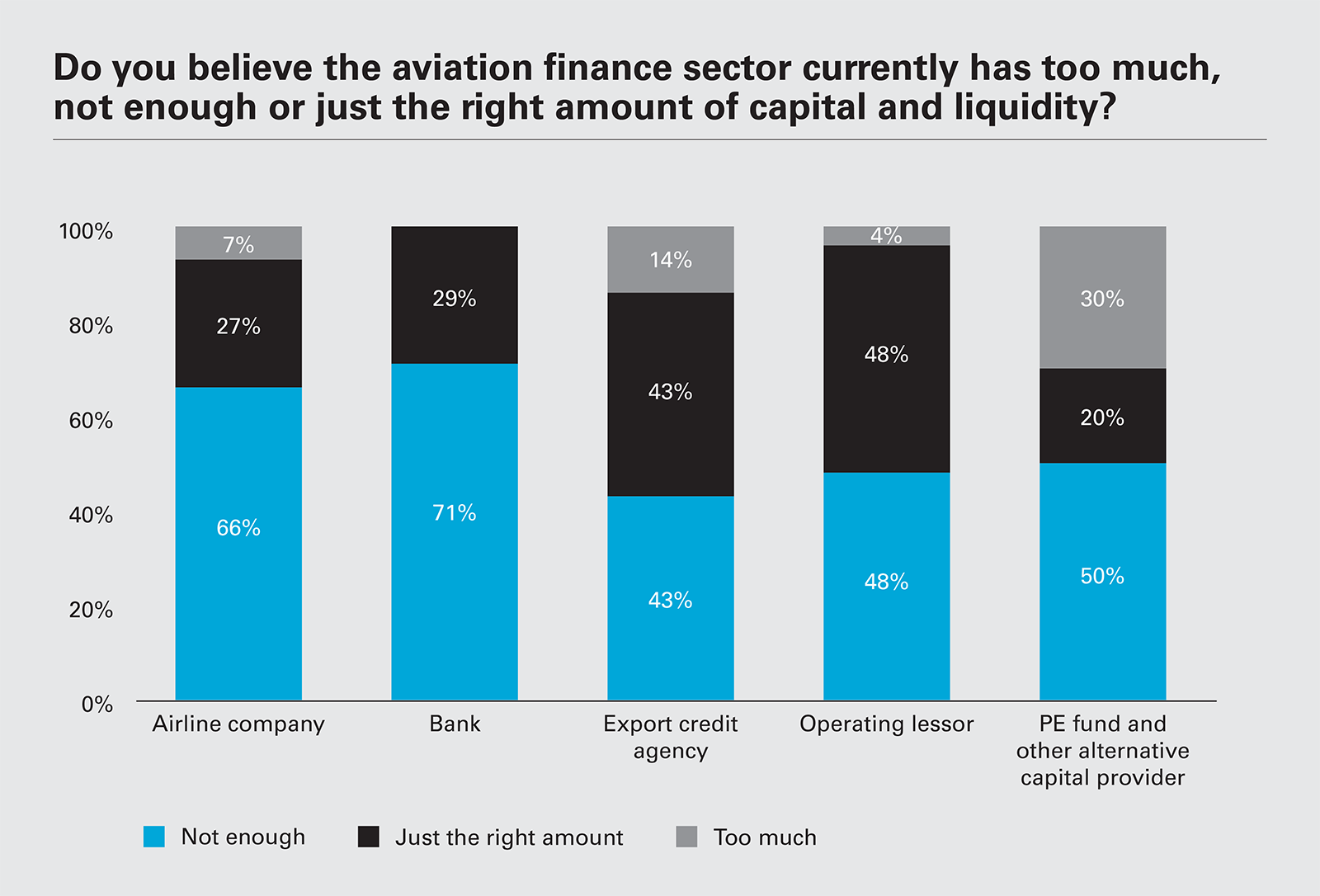 View full image: Do you believe the aviation finance sector currently has too much, not enough or just the right amount of capital and liquidity? (PDF)

Looking ahead, majorities of respondents across all regions think that capital and liquidity in the aviation sector will rise in 2022, suggesting that the level of financing is set to improve.

Globally, nearly two-thirds (65 percent) expect capital liquidity to increase, while only 4 percent think it will fall. North America–based respondents are more likely to predict an increase (71 percent), with those in APAC less likely (63 percent). Looking at respondent types, banks are the group most likely to point to increased capital liquidity in 2022, while export credit agencies are the least likely. 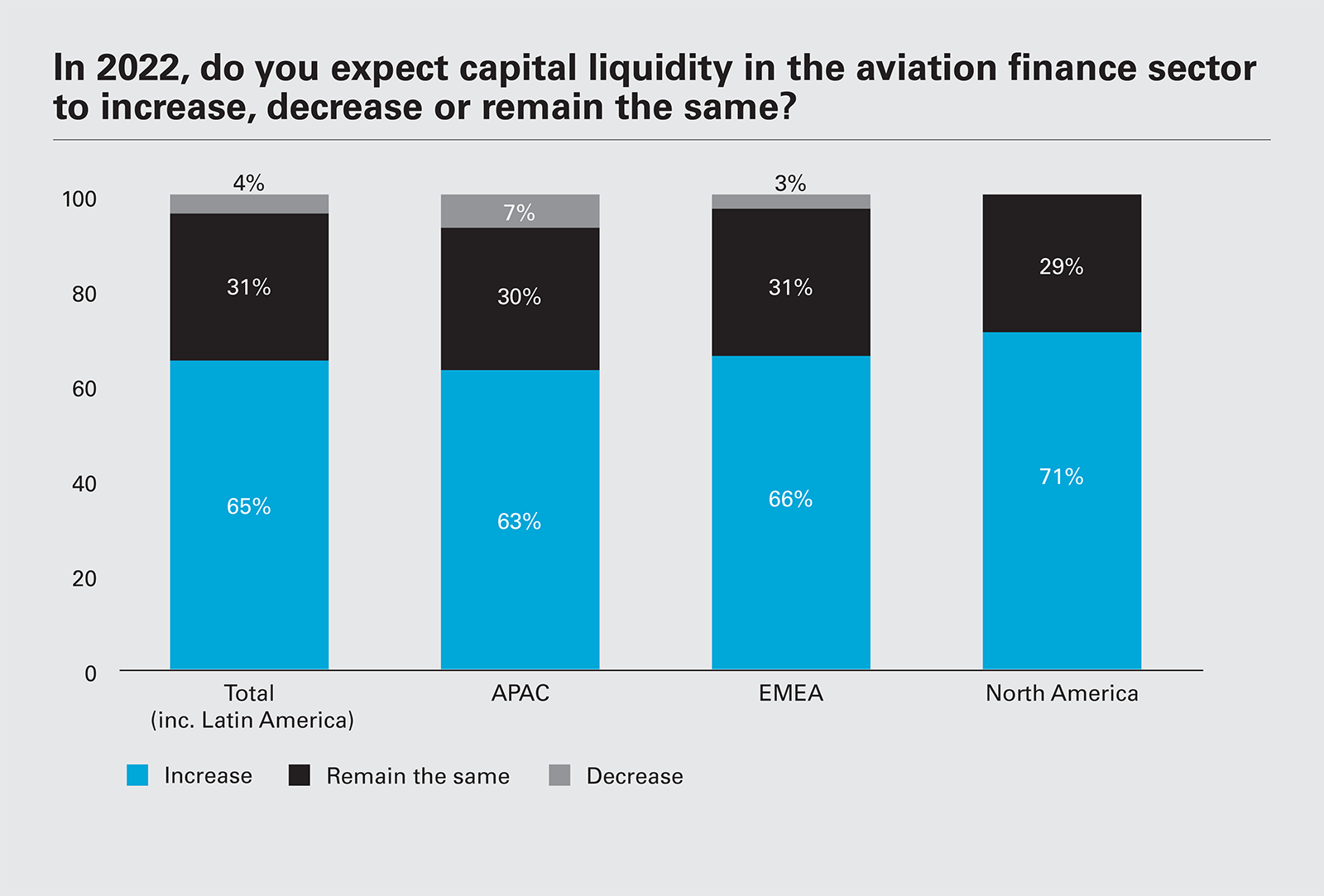 View full image: In 2022, do you expect capital liquidity in the aviation finance sector to increase, decrease or remain the same? (PDF) 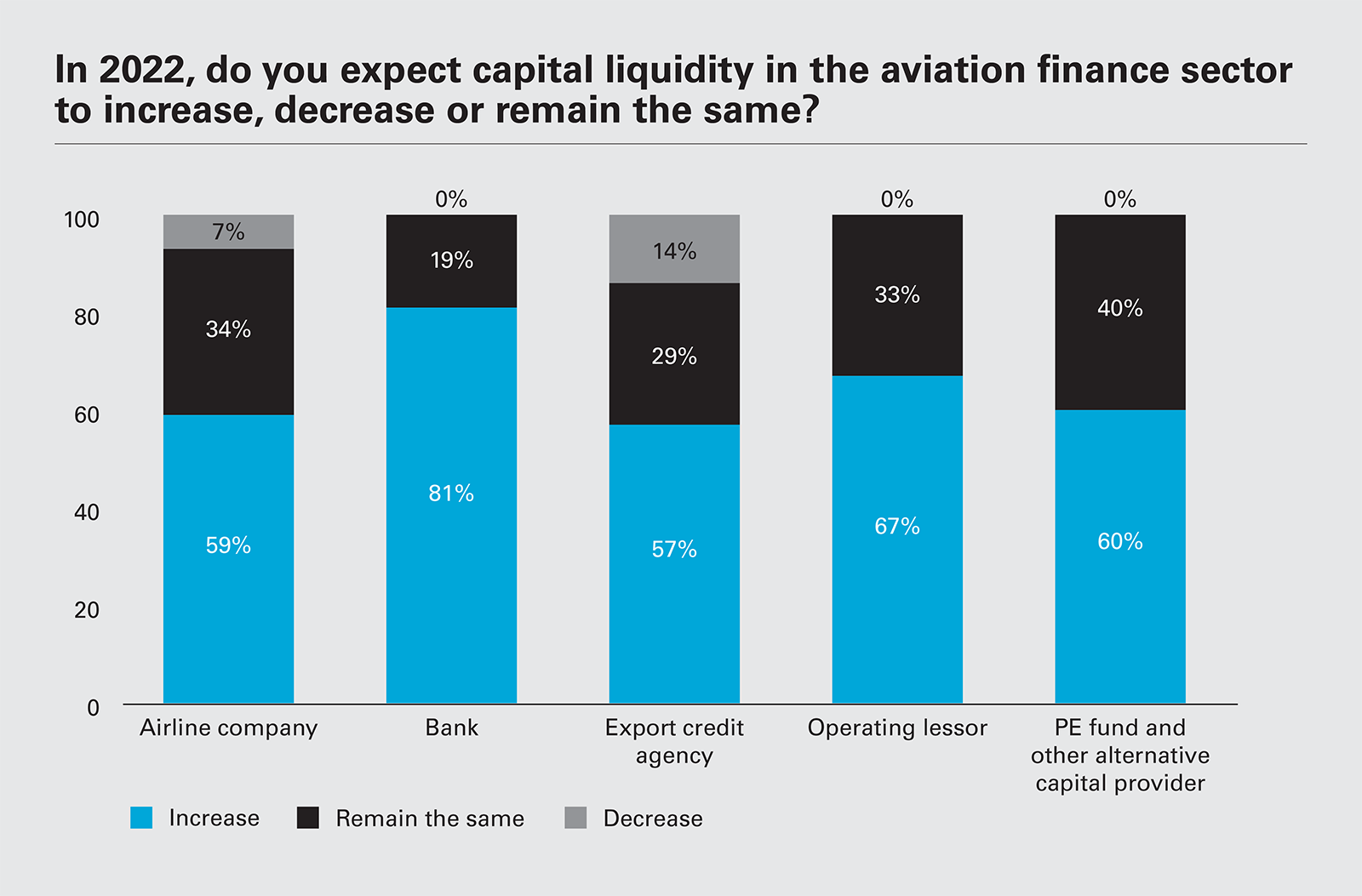 View full image: In 2022, do you expect capital liquidity in the aviation finance sector to increase, decrease or remain the same? (PDF)

Turning to the question of refinancing, our survey suggests that on the whole, respondents were slower to take advantage of the record-low interest rates of the past year than might have been expected. Overall, only 29 percent say that they refinanced a significant amount of debt. This apparent lack of urgency may not be surprising, given the prevailing low rates and the reluctance of governments (so far) to tighten monetary policy.

Looking ahead, our survey indicates refinancing is likely to gain momentum in 2022, with 57 percent of all respondents expecting to refinance significant amounts of their existing debt and only 13 percent saying they have no plans to do so. EMEA respondents are the most interested in this course of action (66 percent expect to refinance in the year ahead), and those in North America are the least interested (45 percent).

The rising appetite for refinancing is likely linked to a number of factors. These include the need to refinance term debt as it falls due and the opportunity for refinancing driven by higher levels of M&A—a point underlined by the fact that a large majority of respondents expect to see significant airline and leasing company consolidation in 2022. Overshadowing all of this is the fact that interest rate hikes are on the horizon—although even with an increase, they could still remain near historic lows. 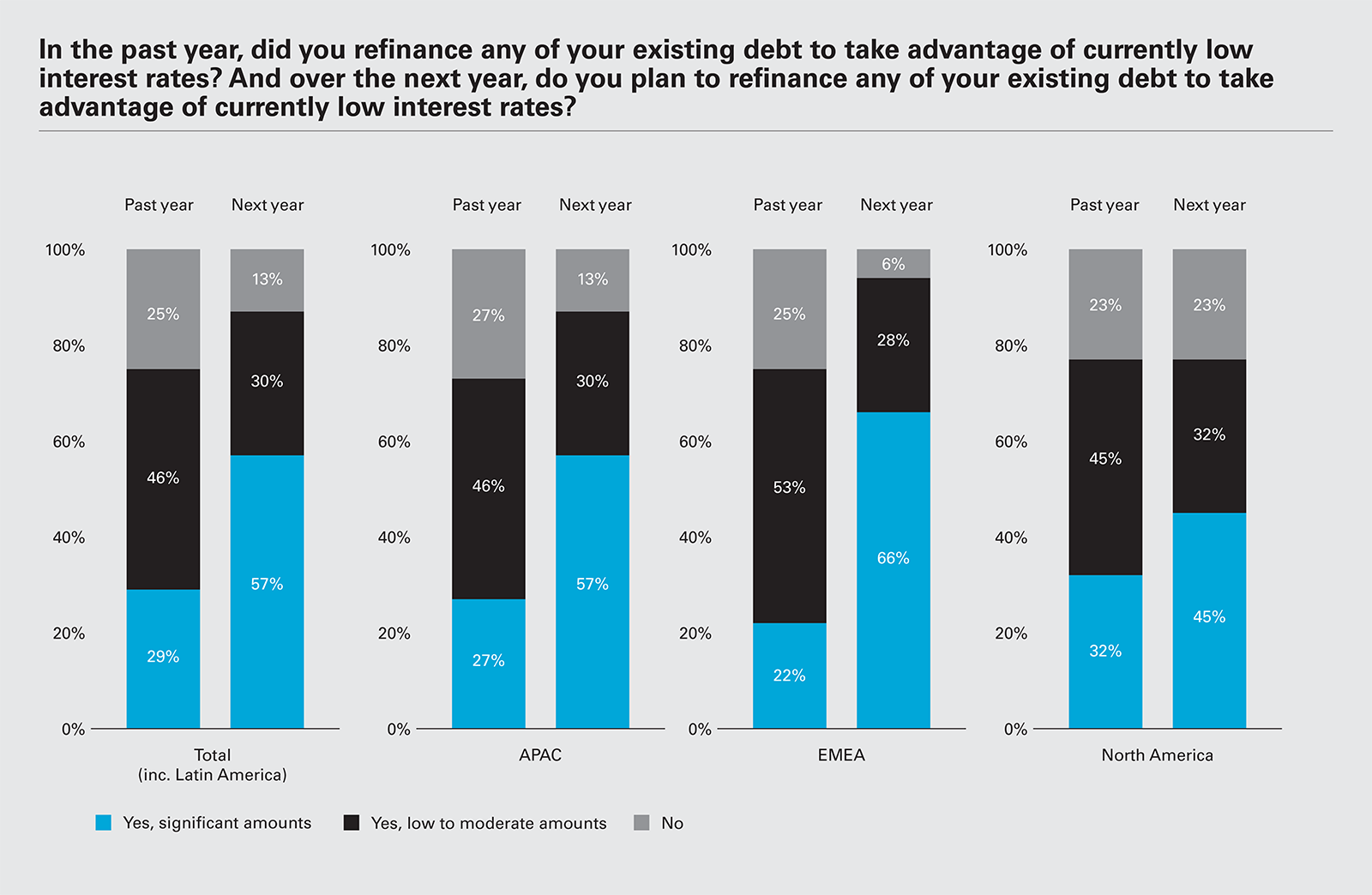 Aside from sharpening the appetite for refinancing, low interest rates also look likely to stimulate demand for new lines of credit and other debt facilities in the year ahead. While 29 percent of respondents globally say they took on "significant amounts" of new debt in the past year, 46 percent are looking to do so over the next 12 months. EMEA respondents are most likely to open new lines of credit or take advantage of debt facilities (50 percent), while those based in North America are the least likely (39 percent). 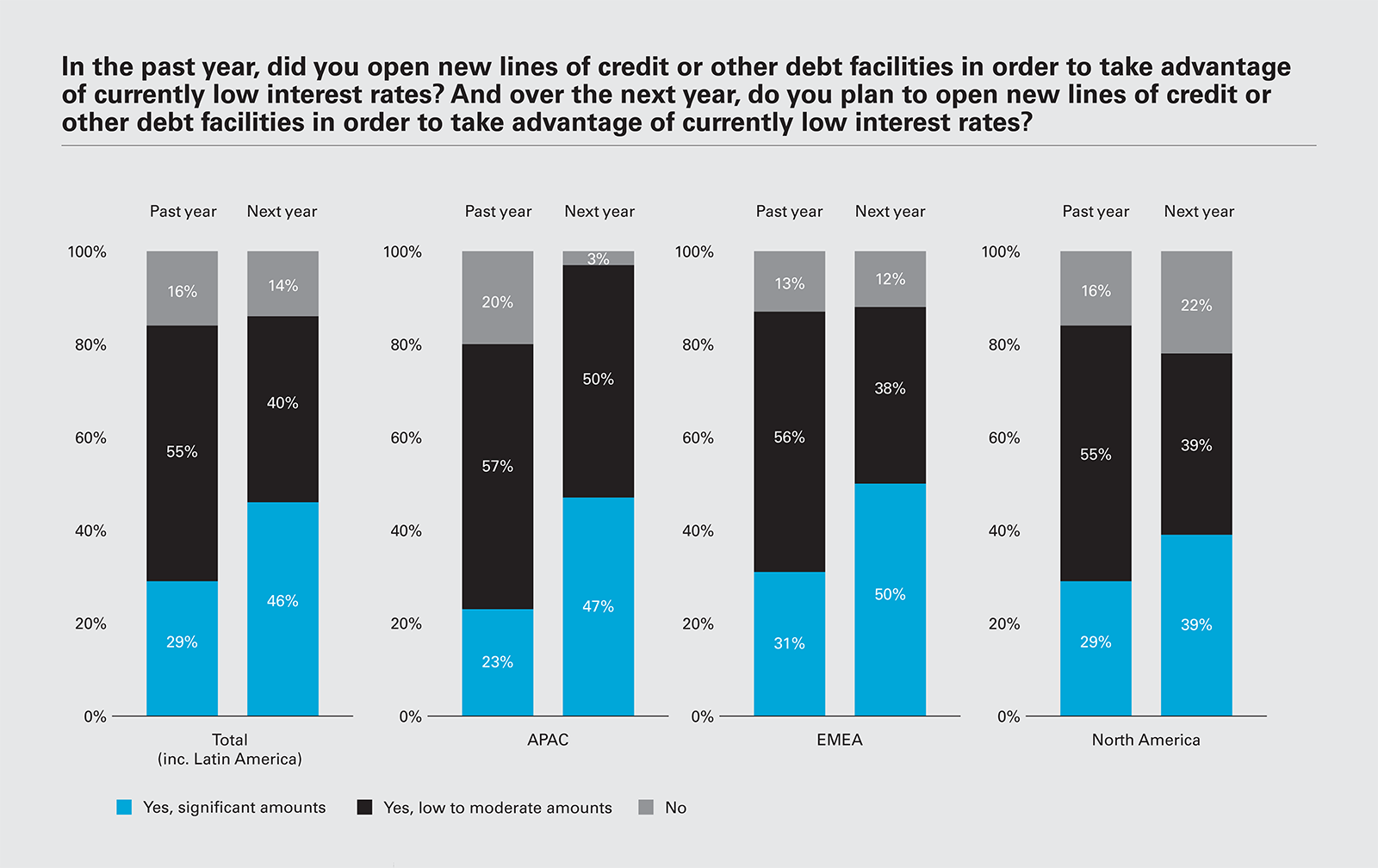 Aviation sector players are clearly confident about their continuing ability to refinance their debt and tap into new sources of funding. At the same time, there is also widespread recognition that the shakeout in aviation is still far from over. Many airlines have already been through painful restructurings, with notable chapter 11 filings in the US by Aeroméxico, Avianca and LATAM—the three most important carriers in hard-hit Latin America.

Our survey shows that a majority of respondents expect restructurings and insolvencies to increase in 2022. This opinion is prevalent in APAC, with 90 percent of respondents expecting such an increase. In large part, this reflects the fact that airlines in Asia-Pacific (along with those in Latin America) generally have not benefited from the same level of government support as airlines in Europe and North America. "The COVID-19 pandemic has affected our repayments, and the debt has mounted ever since," says the head of finance at an APAC-based airline. "We are in the process of restructuring, and this will mitigate the risk of any further loss due to the pandemic." 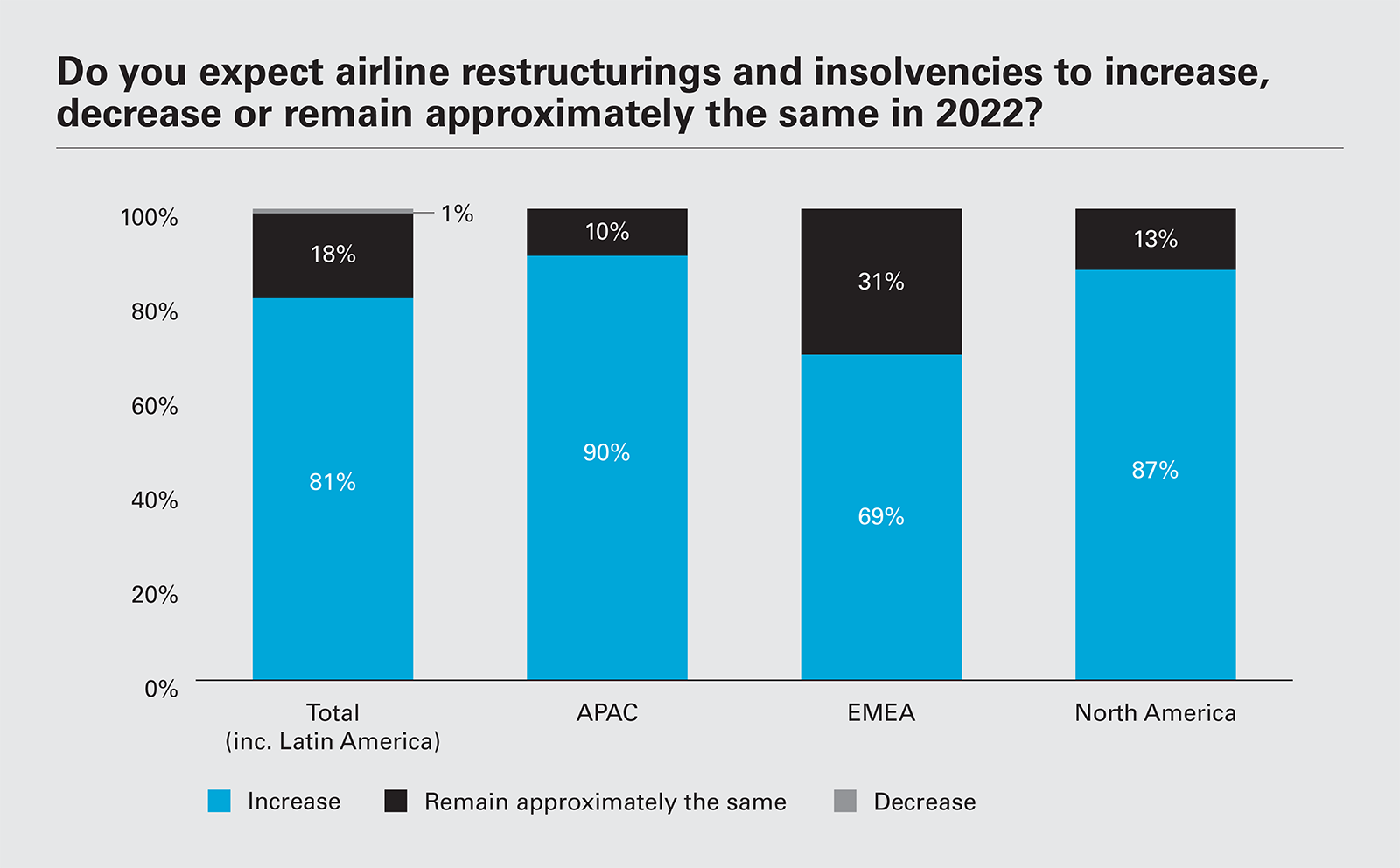 View full image: Do you expect airline restructurings and insolvencies to increase, decrease or remain approximately the same in 2022? (PDF)