Hydrogen—abundant in water, biomass and other natural sources—is an important fuel in the global quest to reduce and eliminate greenhouse gas (GHG) emissions. Burning hydrogen produces only water vapor, without GHG emissions. This makes hydrogen an especially useful fuel in cases where GHG emissions are otherwise difficult to reduce, such as in the shipping, aviation and road transport sectors.

Hydrogen fuel can be produced through processes that are:

Low-carbon hydrogen production processes can be a valuable option in areas of the world that lack widespread, consistent renewable power sources but still aim to reduce their GHG emissions when they produce hydrogen fuel for storage, use and sale to others. Several African countries have already begun producing hydrogen and/or establishing hydrogen-related projects.

Africa has an opportunity now to implement national hydrogen policies that could attract more foreign direct investment into low-carbon hydrogen production projects, generate foreign exchange through hydrogen exports, create jobs and stimulate the local use of hydrogen-fueled technologies, all while contributing toward a global reduction in GHG emissions.3 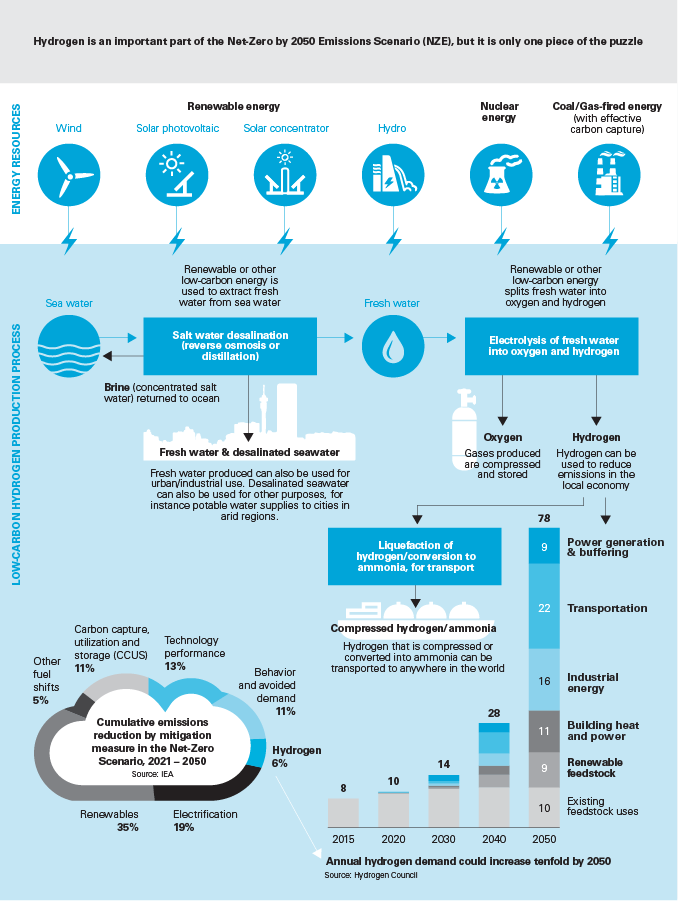 View full image: Hydrogen is an important part of the Net-Zero by 2050 Emissions Scenario (NZE), but it is only one piece of the puzzle (PDF)

As a fuel source, hydrogen is not a new idea. The first internal combustion engine, invented in 1806 by Francois Isaac de Rivaz, was powered by hydrogen gas.4

As the world seeks to mitigate global warming, producing hydrogen at scale for the energy sector has emerged as a promising component of pathways to "net-zero" GHG emissions.5

Low-carbon hydrogen production processes work by pairing lower levels of renewable energy sources (for example, in regions where sun and wind are not always reliable) with nuclear electricity or fossil fuels (see infographic). This makes vast swaths of Africa well suited to green and low-carbon processes that could produce hydrogen fuel for use, storage and sale to others.

Led primarily by the private sector, a number of pilot hydrogen production projects are already proposed or under development in Africa.6 However, most African countries have not yet adopted legislation and incentives to promote green or low-carbon hydrogen processes. This is an opportunity lost. 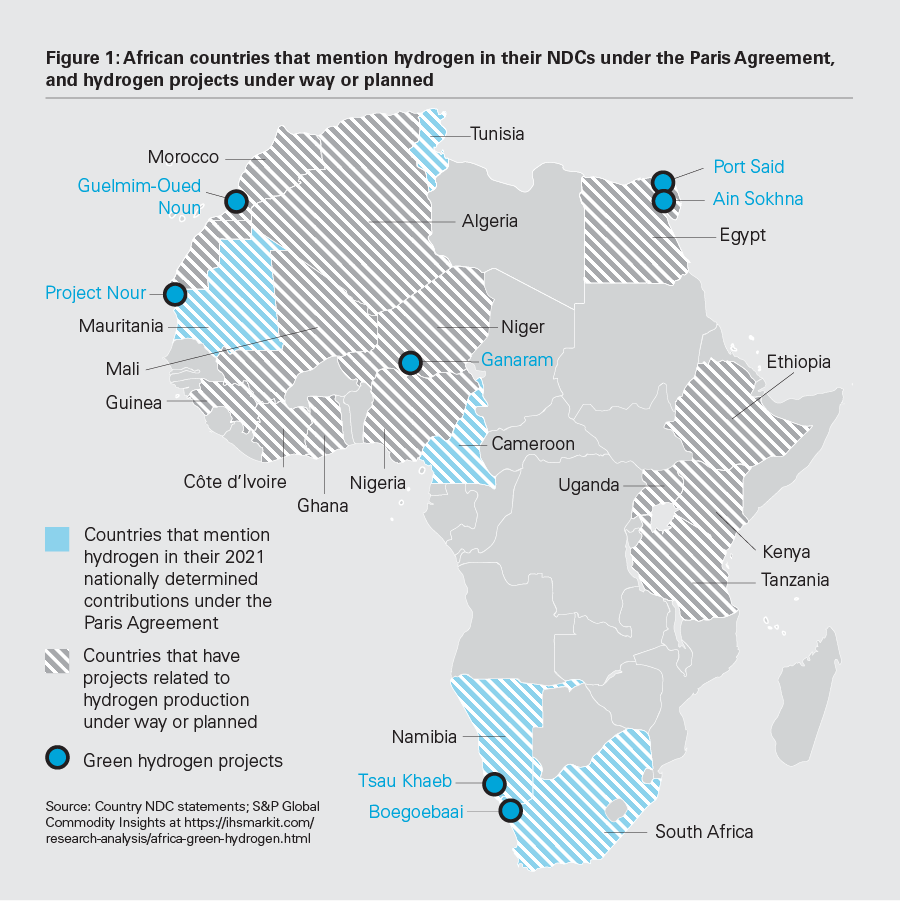 View full image: Figure 1: African countries that mention hydrogen in their NDCs under the Paris Agreement, and hydrogen projects under way or planned (PDF)

According to the International Energy Agency (IEA), the long-term use of hydrogen in the world's transition to clean energy requires national policies that support implementation, including strong demand-side measures to create clearly identifiable markets.7 To unlock private sector investment into green hydrogen, government policies should include:

Each country that is a party to the Paris Agreement on Climate Change8 sets out how it intends to reduce its national GHG emissions and adapt to the impacts of climate change through national plans called Nationally Defined Contributions (NDCs).9

In the most recent NDCs, submitted in 2021, only five African countries (out of the 54 on the continent)—South Africa, Namibia, Mauritania, Tunisia and Cameroon—mention hydrogen as a potential energy source.

South Africa's NDC states that it requires concessional finance, debt restructuring and support from the international climate and development and finance community in order to develop infrastructure for "green hydrogen in support of electric vehicles and public transport."10 Cameroon's NDC goes further, stating that while it will continue to exploit on-shore and off-shore oil & gas resources, it plans to attract investors to develop projects relating to clean energies, such as hydrogen and ammonia.11 Tunisia's NDC similarly states that technology transfer programs are needed for hydrogen in the power and mobility sectors.12

Namibia plans to replace hydrocarbons with hydrogen for electricity generation.15 Its NDC specifically states that "green hydrogen will play a crucial role in reaching the emissions neutrality goal" for Namibia. To give effect to this:

Hydrogen policies and practices in Africa

While many African countries did not explicitly mention hydrogen in their NDCs, a significant number have nonetheless adopted policies and/or implemented hydrogen-related projects that at least partly align with the IEA's factors. (See Figure 1.)

These projects highlight how the private sector is a primary driver behind hydrogen production in Africa. For hydrogen to achieve its full potential in supporting these NDC objectives, African governments must implement regulatory reforms.

The private sector: Jump or get pushed

Private sector pioneers that are blazing the hydrogen trail will bring along others in their supply chains. Their supplier contracts will likely evolve to include provisions relevant to climate change mitigation. For instance, the Chancery Lane Project,23 a collaborative effort to create contractual clauses that compel contracting parties to reduce their GHG emissions, proposes adding contractual rights to:

Private sector entities can also add individuals onto their boards who are responsible for integrating net-zero GHG emission goals into the corporate strategy and achieving those goals.27

At the 2021 COP26 UN Conference on Climate Change, private sector participants called upon politicians to take the lead on developing and implementing metrics, guidelines and strategies to evaluate measures to reduce GHG emissions and achieve net-zero.28 The IEA Standards to Develop and Promote Energy Efficiency and Renewable Energy Sources29 are a good example of such guidelines.

Countries in Africa that succeed in developing such measures will be the most likely to benefit from private sector investments into hydrogen production for export and the development of local hydrogen markets, which in turn will support their own net-zero GHG emissions goals. At the same time, businesses will likely increase pressure on suppliers in their value chains, including those in Africa, to reduce their GHG emissions and hence their own indirect ("Scope 3") emissions30

If current global warming trends continue and the resulting consequences become more directly observable, the pressures on both governments and the private sector will likely increase.

For countries that are fortunate enough to have the natural resources required to produce hydrogen at industrial scale—which includes many in Africa—this offers an opportunity to be seized.