To show the history of Africa and China's relationship, some scholars write of the discovery of ancient Chinese ceramics in East Africa and trading ties that date from the Song Dynasty (960 – 1279). When Zhou Enlai, then Premier of the People's Republic of China, visited Tanzania in 1965 he referenced the Chinese explorer Zheng He in proclaiming: "My colleagues and I do not find ourselves in a strange land. Intercourse between our countries dates back to 900 years ago."1

Today, the Five Principles of Peaceful Co-existence that formally govern Chinese foreign policy to this day have a strong African connection.2 China's interest in Africa ramped up considerably during the 1990s, strengthened even more through the following decade and has continued under current President Xi Jinping.

China's engagement and support in Africa was for many years an extension of political relations. For instance, African votes were instrumental for China's admittance to the United Nations3. More recently, though, China's focus on Africa has become increasingly economic. For example, Africa's natural resources played a large role in China's growth for decades.

This historical context affects the current China-Africa relationship in Africa, as well as China's long-term plans for continued support and engagement with African nations.

Since 2000, all the African nations (except Eswatini) have conducted formal inter-government collaboration with China through FOCAC. In his keynote speech at the 8th Forum on China-Africa Cooperation (FOCAC) summit in Senegal in November 2021, President Xi Jinping proposed that over the next four years, China and Africa should collaborate on4:

At this FOCAC summit, a "China-Africa Cooperation Vision 2035" was published that specifies nine programs across a wide range of sectors earmarked for implementation during the first three years of this initiative.5

In economic terms, 2013 marked a pivotal milestone, as China overtook the United States (US) as the largest equity investor nation into the African continent, measured in terms of new foreign direct investment (FDI flows) (see Figure 1). FDI flows to Africa from the European Union (EU) countries collectively continue to dwarf those of both China and the US, though.6 In 2020, the top African destinations of Chinese FDI were Kenya, the Democratic Republic of the Congo, South Africa, Ethiopia and Nigeria.7

Itself the largest single recipient of global FDI inflow during 2020 and 2021, China is well aware of the transformational impact of strong FDI flows. In addition, Africa in 2022 bears marked similarities, both demographically and economically, to China in the early 1970s.8

Current UN growth projections forecast that Africa's population will reach approximately 1.7 billion people by 2030.9 China therefore seems to be positioning itself to lead Africa's future FDI, and thus grow African markets to benefit its own trade.

This can be seen in China's diversification of investments away from mining and infrastructure to include service industries (scientific research, technology services and others) transportation, warehousing and postal services.10 It is further reinforced by Chinese support for infrastructure development projects under its Belt and Road Initiative (BRI), which is likely to remain a crucial component of China's international relations. In the Government Work Report presented at China's National People's Congress in March 2022, Premier Li Keqiang emphasized: "We will promote high-quality cooperation under the Belt and Road Initiative… We will, on the basis of consolidating cooperation on enhancing connectivity, move steadily to open up new areas of cooperation."11 BRI projects include railways to link the continent's eastern seaports to the interior, such as a railway from Nairobi to Mombasa and a new line from Djibouti to Addis Ababa (then eventually to Dakar, Senegal, on the continent's west coast).12

The COVID-19 pandemic, sanctions imposed on Russia and other global events have had a profound impact on China's outbound FDI and its economy generally. The Asia Development Bank now projects that China's GDP will grow at 5 percent in 2022 and 4.8 percent in 2023.13 This contraction in growth rates may be driving a strategic pivot by China back toward greater international engagement, which could have a positive impact on Chinese FDI into Africa.

According to UNCTAD, the combined effects of low commodity prices and the COVID-19 pandemic caused global FDI into Africa to contract by 16 percent in 2020 to US$40 billion (down from US$47 billion in 2019), while international project finance announcements—especially relevant for large infrastructure projects—contracted by 74 percent to US$32 billion.14 FDI into Africa rebounded strongly in 2021, with preliminary UNCTAD estimates suggesting a total of US$97 billion for the year (but US$42 billion of this was due to the share swap between South African multinational Naspers and its Netherlands-listed investment unit Prosus).15 Barring other, similar singular transactions, FDI into Africa might continue to grow modestly in 2022 and beyond. Significant infrastructure needs across the continent and growing populations may increase demand for project finance of all forms in Africa.

China is also increasing the links between its financial systems and those of African countries. As of October 2021, the Cross-Border Interbank Payment System (a payment system that offers clearing and settlement services for its participants in cross-border renminbi payments and trade) had 42 indirect participants in Africa from 19 African countries. The People's Bank of China (China's central bank) has signed a total of RMB 73 billion (approximately US$11.5 billion) in currency swap agreements with the central banks of South Africa, Morocco, Egypt and Nigeria. 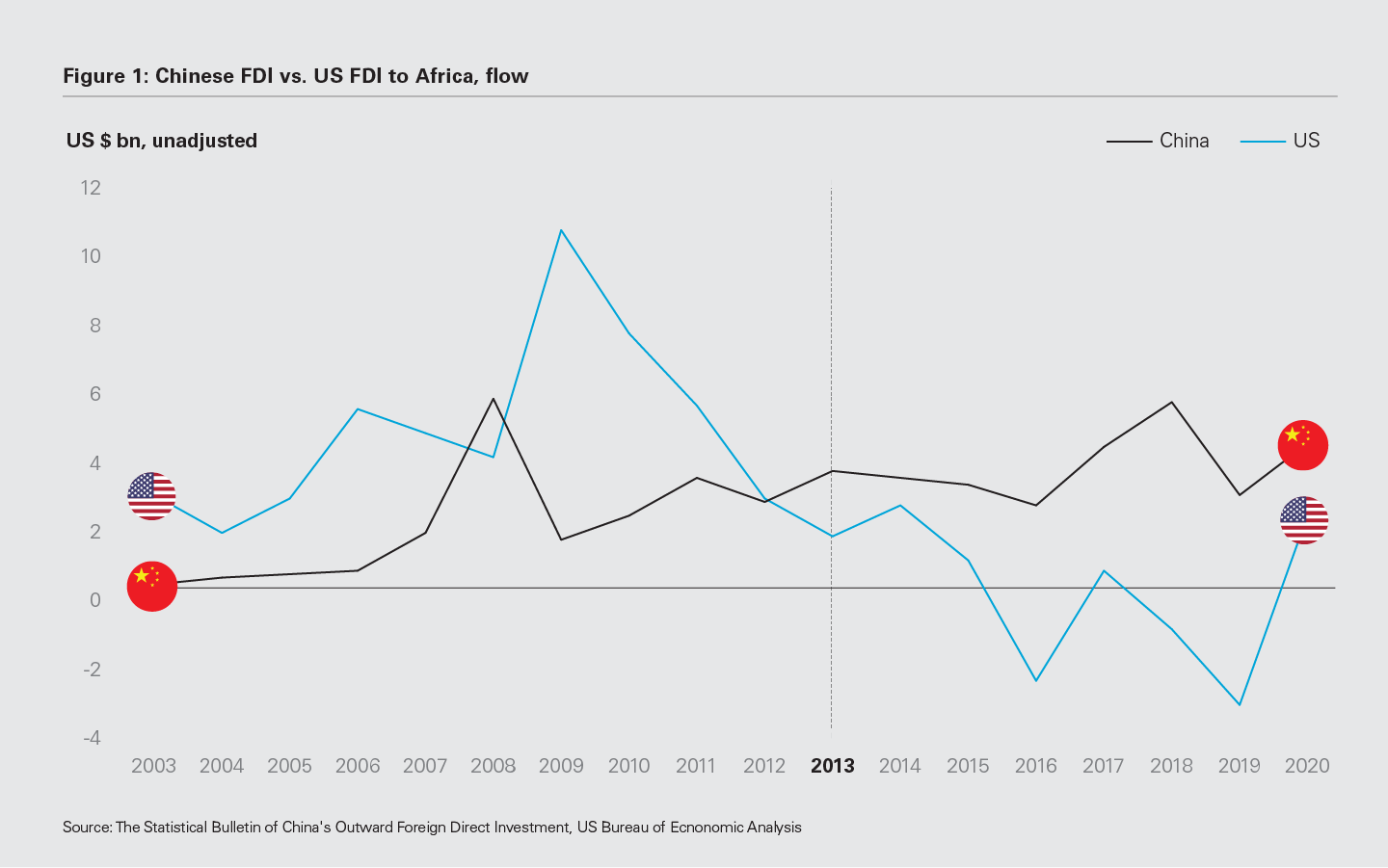 Trade between China and Africa has increased steadily in recent years. China has been Africa's largest single national trading partner for the past 12 consecutive years (see Figure 2), although trade between Africa and EU nations collectively continues to significantly exceed Africa's trade with either China or the US.16 According to the latest data released by the General Administration of Customs of China, the total bilateral trade between China and Africa reached US$254.3 billion in 2021, up 35.3 percent from 2020, and African exports to China reached US$105.9 billion dollars in 2021, up 43.7 percent from 2020.17 The bulk of this trade is with only five countries: South Africa, Angola, Kenya, Nigeria and Egypt.18

Although China's dependence on crude oil imports declined slightly in 202119, in 2020 three African countries (Angola, the Democratic Republic of the Congo and Gabon) accounted for 10.8 percent of those imports, worth US$18.3 billion20. China also has a strong interest in African mining and minerals. Africa contains approximately half of the world's stock of manganese, an essential ingredient for steel production, and the Democratic Republic of the Congo alone produces more than 70 percent of the world's cobalt.21 Africa also has significant amounts of coltan (needed for electronics) and half of the world's known supply of carbonatites (a rock formation that is the primary source of rare earth minerals).22 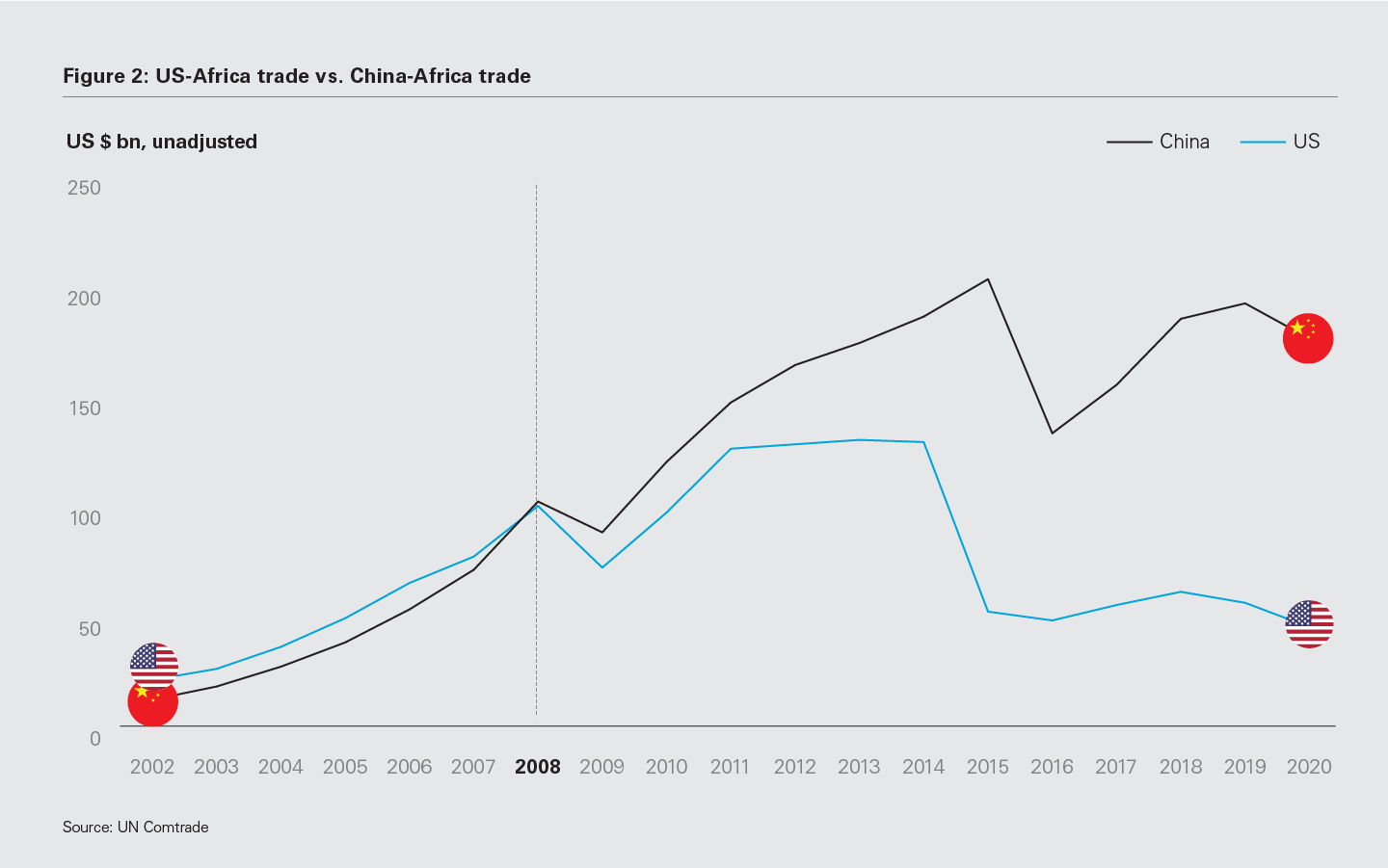 Between 2000 and 2019, Chinese financiers signed 1,141 loan commitments worth US$153 billion with African governments and their state-owned enterprises, according to the China Africa Research Institute (although these numbers do not equate to actual African government debt, as their database does not track disbursement or repayment).23

Although Chinese loans to Africa sometimes are criticized by Western sources as "economic colonialism" and "debt-trap diplomacy,"26 most Chinese loans have funded large-scale infrastructure projects, with the aim of enhancing economic growth and prosperity across Africa. In addition, these projects have made significant inroads into bridging the continent's energy deficit and supplying infrastructure to ensure the success of the African Continental Free Trade Area.27 In fact, in keeping with the Five Principles of Peaceful Co-existence, China's loans typically are not accompanied by non-financial requirements (that could be considered interference in the internal affairs of the borrowing nation). The loan agreements frequently impose strict confidentiality on borrowers, though, with contracts governed by Chinese law and any disputes that arise to be settled by arbitration in China.28 When African nations find themselves with repayment difficulties, China engages in bilateral discussions to resolve the issue and has sometimes written off debt with the poorest countries.29

Still, Chinese loans are nowhere near sufficient to fund all of Africa's needs. In its 2018 African Economic Outlook, the AfDB estimated Africa's infrastructure needs as US$130 – 170 billion per year, with a US$68 – 108 billion financing gap.30 In 2021, the International Monetary Fund estimated that Africa required US$285 billion of additional financing by 2025 to fund an adequate COVID-19 response.31 By comparison, total external public debt across Africa amounted to approximately US$726 billion in 2021.32

The next four years will likely remain challenging in Africa (as perhaps in the rest of the world). The continent remains vulnerable to COVID-19 (according to the World Health Organization, only 11 percent of Africa's population is fully vaccinated),33 and current global sanctions are impacting economic trends in ways that are not yet fully understood.

For African nations to continue to grow, they need friends who invest in them, recognize the vast potential of African markets and lend them funds needed to realize that potential. For many years, China has showed itself to be such a friend, and President Xi Jinping's comments at the 2021 FOCAC summit and otherwise show that it intends to remain one.