Taiwan in the changing global landscape

Taiwan in the changing global landscape

Significant legal and business developments during 2020

2020 witnesses a year filled with significant changes to all of our professional and personal lives.

Businesses and individuals worldwide are witnessing significant geopolitical fractures that have resulted in significant changes to various aspects of the global legal landscape, such as financing, trade, sanctions, foreign direct investment (FDI), intellectual property and antitrust. The COVID-19 pandemic has also negatively affected many aspects of deal-making, with general corporate finance transactional activity levels significantly lower than last year. On the other hand, distressed M&A, restructuring and financing activities are on the upswing, as is the case for investments in sectors that are primed to take center stage in a post-COVID-19 world.

Taiwanese companies and financial institutions are not immune to these global developments. Indeed, Taiwan's unique positioning in the global supply chain and other areas warrants special attention to some of these issues faced by other players globally.

While the COVID-19 pandemic has prevented us from seeing clients in person in Taiwan this year, we continue to focus on the latest legal issues and trends affecting our Taiwanese clients and other contacts globally. Through a series of webinar presentations and online meetings, our objective this year is to deliver to you updates on the following key topics of interest:

We hope this report and our recent webinars are helpful in navigating a swiftly changing landscape.

Europe again has the technology sector in its target zone

New US antitrust implications for your supply chain

What Quanta Storage and Qualcomm mean for Taiwan's businesses

By Farhad Jalinous and Tilman Kuhn

By Bijal Vakil and Henry Huang

By Alexander McMyn and Eugene Man

What next for Taiwanese banks and businesses?

By Steven Sha and Daniel Yeh

What they mean for investors in the region

Over the past two years, many technology companies have become patent infringement defendants in the US District Court for the Western District of Texas (the "Western District"). This includes many corporations with operations in and around Austin, Texas, a growing US technology hub.

Patent litigation moves rapidly in this jurisdiction, compared to other US venues, making it the latest US patent "rocket docket." Defending against patent infringement charges in the Western District creates two major concerns for technology companies. First, fast-paced adversarial proceedings create pressure to respond and adapt quickly. Second, most companies historically have found it difficult to transfer their cases to another venue.

We recommend that a technology company sued in the Western District seek to avoid litigation in this venue and follow a well-planned strategy to improve the chances of obtaining a successful outcome on the merits. Here is an overview of what you could face:

Patent lawsuits in the US have increased in the past year for multiple reasons, including financial pressure to monetize patents, recent bankruptcies (where companies liquidate patents) and the continuing rise of litigation funding. Finally, the technology sector has generally remained strong amid the COVID-19 pandemic, thus posing a target for potential plaintiffs.

Amid these trends, the Western District is quickly becoming an important patent litigation venue in the US. Technology companies that maintain offices in the Austin area will likely face more patent infringement lawsuits amid the overall increase in patent disputes and related litigation funding. This has happened for several reasons.

First, the rules for venue in patent litigation have become more restrictive. A 2017 US Supreme Court ruling held that patent lawsuits can occur only where a defendant has a "regular and established place of business."1 A number of technology giants maintain offices in Austin, which falls within the Western District. As a result, by 2019, the Western District counted the fourth-highest total load of new patent cases in the US, with one particular judge—Judge Alan Albright—overseeing the vast majority of these new patent filings.2 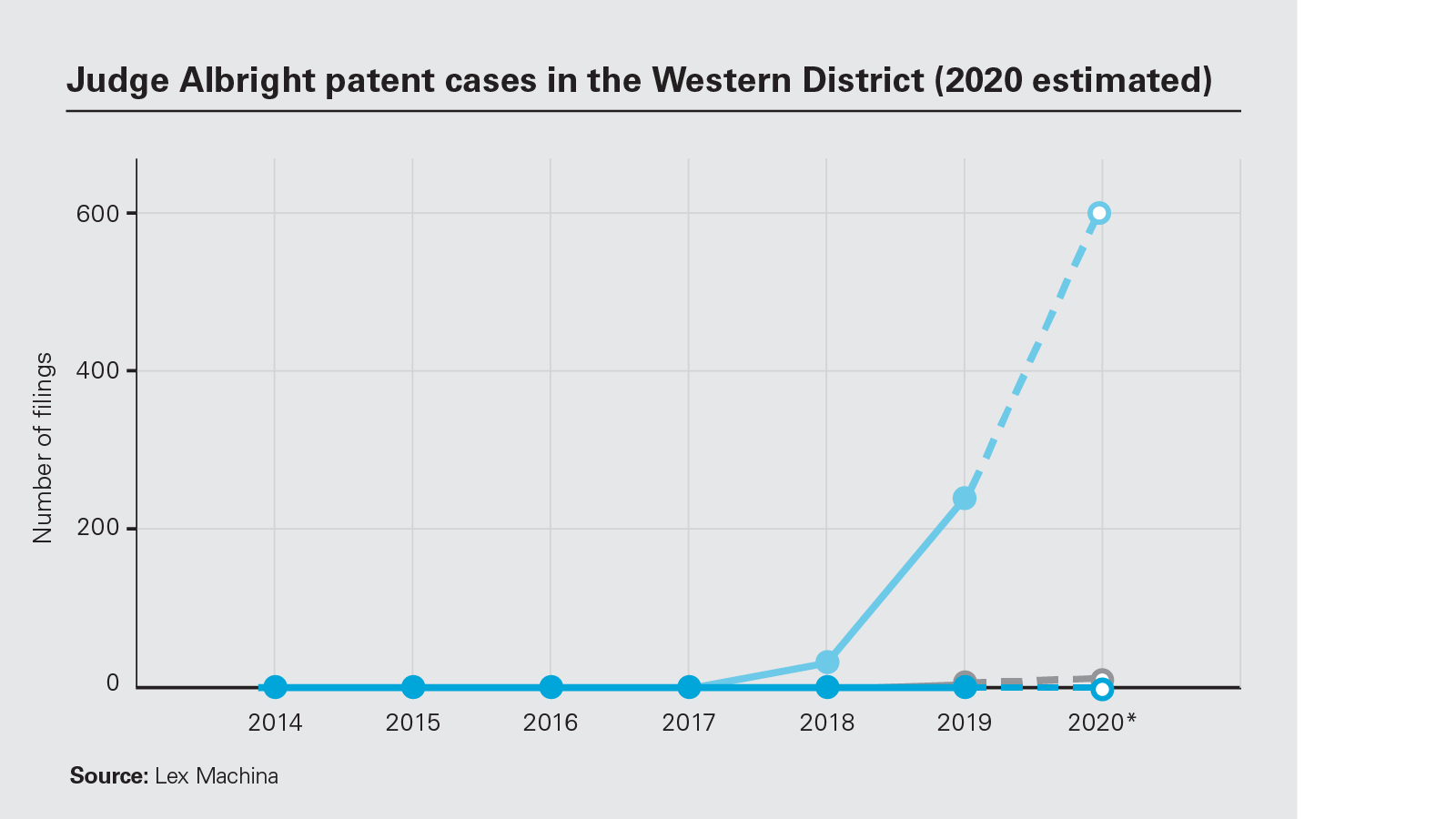 Second, Judge Albright's procedural schedule is particularly rapid, making it attractive to patent plaintiffs (with a fast schedule and relatively low risk of early defense-oriented motions). Since his appointment in September 2018, Judge Albright has received more patent cases than all judges in the Northern District of California combined. His schedules, procedures and outcomes tend to favor patent owners by modifying the incentives to settle early. Judge Albright focuses on resolving patent cases rapidly, has denied almost all requests to transfer a case to another district, allows most cases to proceed into discovery and typically denies defense-oriented motions. As examples, he has generally denied requests for a stay pending a validity challenge before the Patent Trial and Appeal Board (PTAB) and early motions to dismiss.

Since patent litigation in the Western District will likely accelerate, many technology corporations may find themselves forced to litigate before Judge Albright in Waco, Texas.

Two general approaches when sued in the Western District include (1) finding ways to remove your case from this venue and (2) maximizing the chances of achieving the best possible outcome there.

First, a company can try to change venue, primarily by seeking transfer for convenience under 28 U.S.C. § 1404(a). Defendants can request dismissal or transfer, and then petition the US Court of Appeals for the Federal Circuit for a writ of mandamus to change venue. While Judge Albright has denied most transfer requests, the Federal Circuit recently ordered transfer in one of his cases,3and he then granted transfer in another patent case.4

When seeking a transfer, try to highlight that:

As an alternative, an intra-district transfer (such as to Austin) could be significantly more convenient for company witnesses and may change jury atmospherics. Even when refusing transfer to another district, Judge Albright has generally allowed transfers to the Austin division while keeping jurisdiction himself.

Another strategy to control your venue, if there are sufficient threats of litigation, is to sue first for a declaratory judgment against the potential plaintiff in a more defendant-favorable jurisdiction—such as the Northern District of California—before the plaintiff can sue in the Western District. For example, if a patent owner sends your business letters threatening litigation, then you could sue first in another district for a declaration of non-infringement. If the patentee is a practicing entity, then accused infringers can also consider filing countersuits in other venues, or even in the Western District itself.

A third valuable strategy can be challenging the validity of the asserted patents at the PTAB through inter partes review (IPR), post-grant review (PGR), or ex parte re-examination. The PTAB has specialist judges who resolve patent validity, with almost no discovery other than testimony from expert witnesses. The PTAB typically provides a final written decision within 18 months. Although Judge Albright does not grant stays for a case pending IPR, and he has even accelerated case schedules after defendants file IPRs, an early IPR could still invalidate key patent claims and force the plaintiff to take inconsistent positions.

Tips for patent litigation in the Western District

Finally, several techniques can maximize your chances of success in the Western District:

As always, technology companies must remain vigilant about understanding popular venues for US patent litigation and the strategies for winning there. With the prevalence of litigation in the Western District, those strategies have become especially important.