High yield bond activity in the US was down 76 percent year-on-year during the same period, hit by inflation and rising interest rates

Combined leveraged loan and high yield bond issuance in Western and Southern Europe was down more than 65 percent year-on-year, as events in Ukraine hit the markets

Pricing is moving in favor of lenders across the board

Leveraged finance activity slowed on both sides of the Atlantic in the first half of the year, as a tougher macroeconomic environment and events in Ukraine affected debt issuance in both Europe and the US.

The deeper, more liquid US market weathered market headwinds somewhat better than the smaller European market, where exposure to the Ukrainian situation was more immediate due to energy supply chain disruption and geographic proximity, but both markets have encountered headwinds.

According to Debtwire Par, US leveraged loan issuance reached US$612.5 billion in H1 2022, down 19 percent year-on-year. Despite this, issuance remained steady, topping US$100 billion for four months between January and June, peaking at US$113.9 billion in April.

US high yield bond activity, meanwhile, stalled in April and May, as investors sought safer alternatives in the higher interest rate environment. As a result, issuance was down 76 percent by the end of Q2 2022, year-on-year—though recent activity suggests that this trend may have bottomed out. In June, there was US$8.6 billion in high yield bond issuance, more than double the total for May.

Issuance in Europe has proven equally volatile. High yield bond issuance reached US$31.1 billion in H1 2022, down 71 percent year-on-year. Markets came close to shuttering altogether in March and April, with just US$2.2 billion and US$2 billion in issuance, respectively, before climbing back up to US$4.5 billion in May. Many issuers were compelled to offer floating rate bond options to keep markets moving—by the end of May, almost a fifth of European bonds had floating rate coupons, up from 12 percent in 2021 and 8 percent in 2020.

European leveraged loan markets have also slowed, with issuance of US$67.8 billion in the first six months of the year, down 65 percent year-on-year. The drop was particularly evident from month to month, from a peak of US$16.4 billion in March—prior to the deterioration of the macro-economic and geopolitical landscape—then dropping steadily to US$4 billion in June. Unlike the US, issuance has also tracked lower for all the main uses of proceeds in Europe, from general corporate to M&A activity, including buyouts.

One relatively bright spot has been new issuance of collateralized loan obligations (CLOs) in Europe, which was down just 9 percent, year-on-year, at the halfway mark. In the US, by comparison, CLOs were down 12 percent year-on-year, though activity there also remains consistent. 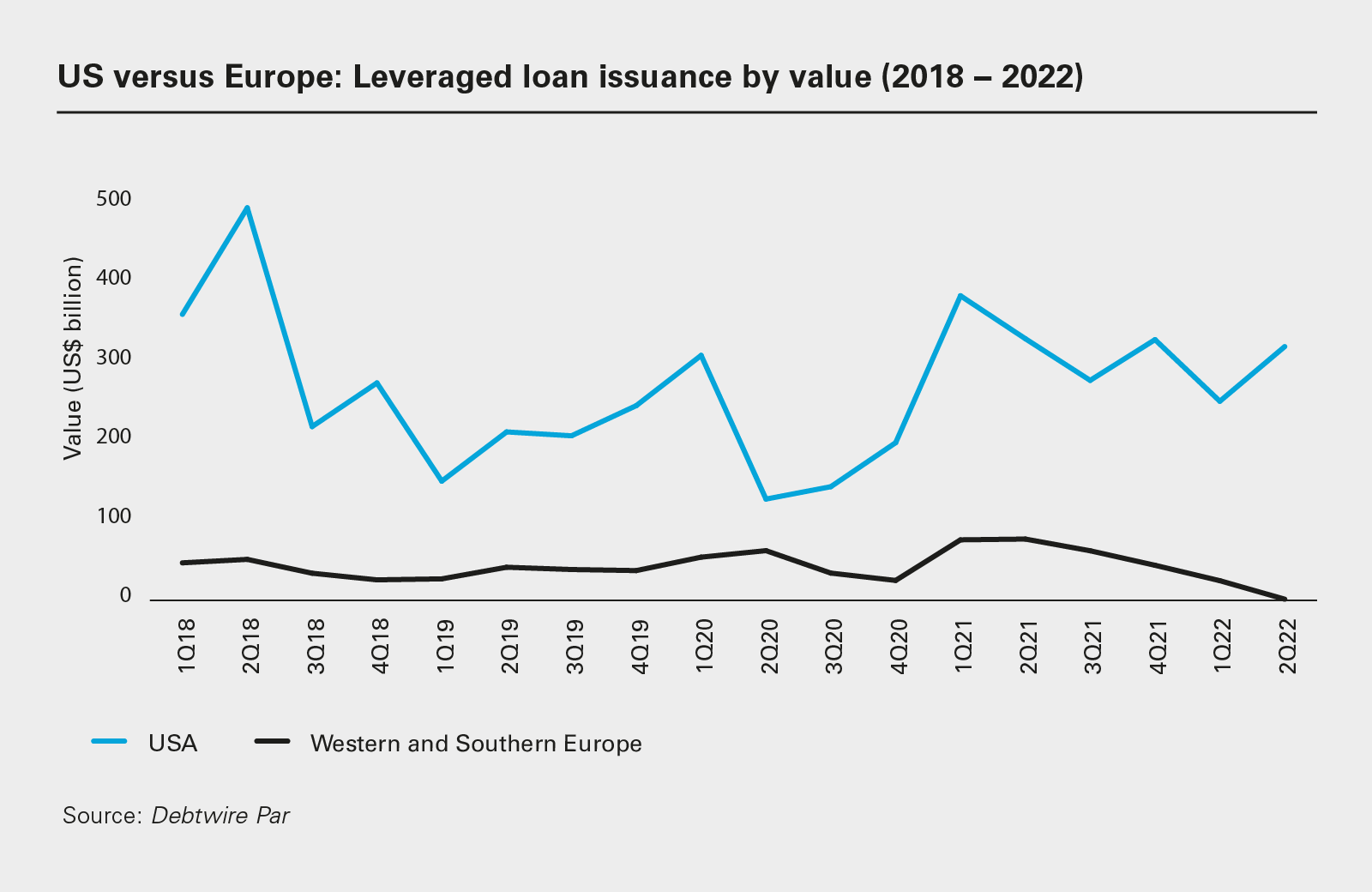 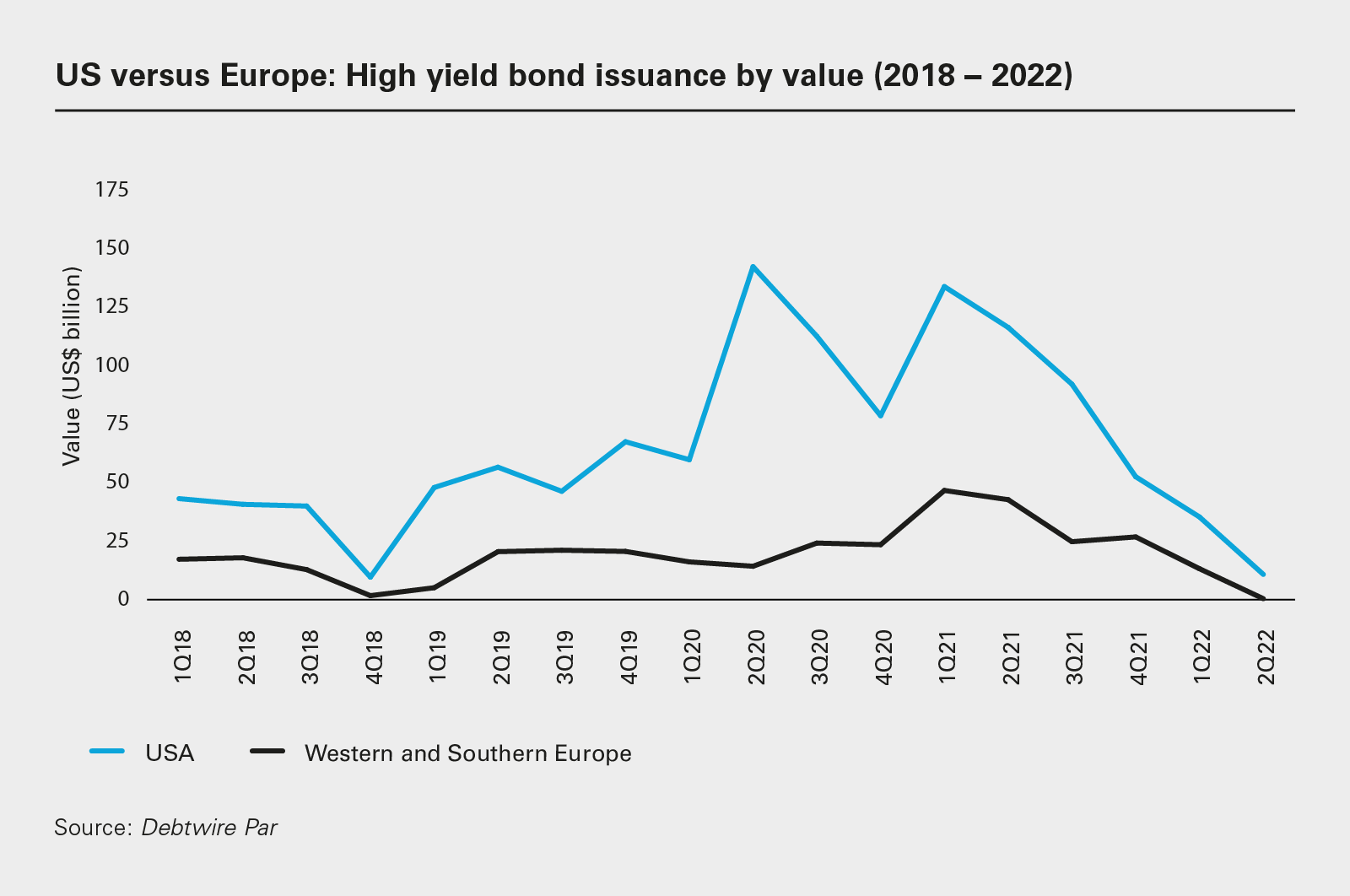 Despite some differences in issuance patterns, US and European leveraged finance markets are nevertheless facing the same inflationary and interest rate pressures. US inflation hit a 40-year high in June, rising to 9.1 percent, while it climbed to 9.4 percent and 8.6 percent in the UK and the EU, respectively, that same month.

In the US, the Federal Reserve moved decisively to try to put a lid on inflation, with interest rate hikes in March, May, June and July. In the UK, the Bank of England (BoE) has upped rates six times since December 2021, reaching 1.75 percent—the highest level in more than a decade. Both bodies are expected to announce further rate hikes this year. In July, the European Central Bank (ECB) raised rates for the first time in more than a decade, by 0.5 percent, with further increases planned later in the year

The medium to long-term outlook is for a higher-rate environment to take hold across all jurisdictions, driving up the cost of capital for European and US issuers.

In Europe, institutional loan pricing has been climbing steadily, with average first-lien margins on institutional loans rising to 4.48 percent by Q2 2022, up from 4.2 percent in Q1 2022. A high volume of low-rated credits has elevated pricing, with higher-rated issuers preferring to delay financings rather than brave a choppy market.

European bond markets have also seen margins swell, with the average weighted yields to maturity on fixed-rate bonds sitting at 6.8 percent by Q2 2022, up from less than 5 percent at the end of 2021.

Pricing has also been trending higher in the US, with overall pricing in high yield markets spiking from 5.71 percent in Q1 2022 to 8.07 percent in Q2. Loan pricing in the US moved upward during the same period as well, climbing from 3.96 percent to 4.31 percent in Q2.

In both the US and Europe, issuers have also been dealing with wider original issue discounts (OIDs) due to the discounts to par available to investors in secondary loan markets. In the US, for example, average OIDs in Q2 2022 climbed to 2.74 percent, up from 0.94 percent in Q1.

One area where the European market has been more robust is in the ESG-linked loan and bond space. While European leveraged finance markets have been coping with a volatile market environment, the region has retained its position as the largest market for ESG-linked debt, where loan margins are linked to meeting ESG key performance indicators.

According to Nordic bank Nordea, Europe represents half of the ESG debt market, more than any other jurisdiction. Analysis by Bloomberg confirms this perception—only one of the ten-largest corporate borrowers of ESG debt is based in the US, with the other nine all operating in Europe.

A strong ESG investor base has allowed European issuers of ESG-linked debt to continue to secure financing. For example, Italian power company Enel, an ESG-linked debt pioneer, issued £750 million in sustainability-linked bonds in April. The offer, which is linked to cutting greenhouse gas emissions, is the largest-ever ESG-linked bond package issued in British pound sterling.

The US is moving to close the gap under the Biden administration, but with the product more familiar to European lenders and the EU’s Sustainable Finance Disclosure Regulation—which defines criteria to qualify environmental and social assets—gaining traction, the US has some catching up to do.