Investors are focusing on pricing and original issue discounts to manage risk, but are starting to push back on documentation

Risks posed by rising inflation, concerns about a global recession and the lingering impact of the war in Ukraine are seeing lenders and investors start to chip away at the loose, borrower-friendly terms that have characterized loan documentation in recent years.

According to Debtwire Par, covenant-lite loans still accounted for 84 percent of institutional loan issuance in the year to the end of June 2022 (only 2 percent less than observed in the bull market of 2021 and equal to or higher than in any other year going back to 2013), but a tougher syndication market is prompting borrowers to move on terms to get deals done.

The lender pushback on documentation, however, has not been wholesale. High-quality credits and private equity (PE)-backed deals are still able to secure borrower-friendly features like unrestricted subsidiary terms and generous grower baskets embedded in loan documentation. (Grower baskets – typically structured as the greater of a fixed dollar amount and an equivalent percentage of closing date LTM EBITDA—allow borrowers to incur additional debt or take certain other actions, which would otherwise be restricted by lenders, within a set limit or percentage of earnings.)

Borrowers may not be pushing for loose documentation with the same intensity as observed last year, but high-quality credits backed by repeat blue chip sponsors continue to receive favorable terms.

For repeat PE issuers, there has been more flexibility on the lender side. According to Covenant Review, PE-backed loans were able to secure looser terms on loans than other issuers, with a score of 3.51 on the Covenant Review scale in May 2022.

For this select group of issuers, concessions have been around the edges, with borrowers only giving ground on some points rather than a retreat across the board.

For now, flexible covenants that allow borrowers to exclude selected liabilities from leverage calculations are still available, as is additional flexibility on baskets, which gives borrowers room to spend higher thresholds of income on dividends or other investments. 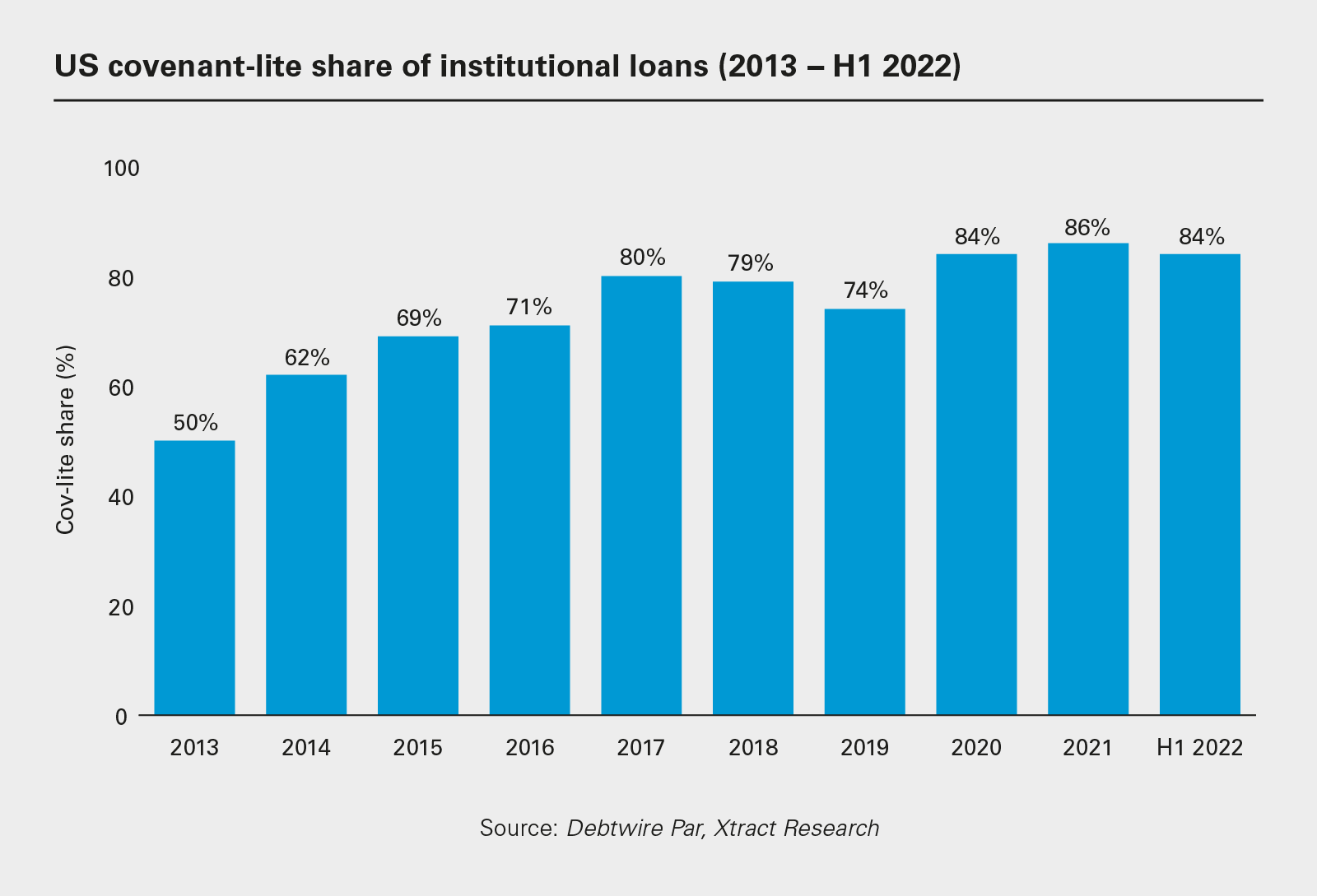 Direct lenders to the fore

With deal execution risk and pricing flex more of a concern in the current environment, direct lenders have been able to compete with the syndication market by holding credits on their own books and offering borrowers flexible terms.

Some direct lenders are offering debt on a cov-lite basis—a change from the status quo where they would require a financial covenant test at the end of each quarter. Cov-lite deals include one springing financial covenant—typically a leverage test—which only becomes live when a borrower utilizes a revolving credit facility beyond a set threshold, including letters of credit that have been issued.

For financial sponsors borrowing to fund buy-and-build strategies, direct lenders have laid on delayed draw term loans, which give borrowers a credit line that can be drawn down over a long period of time when required to finance add-on deals.

The syndicated market will also provide the flexibility for a delayed draw term loan, but the commitment fee charged by direct lenders is usually much lower and it is also easier for borrowers to extend commitment termination dates with direct lenders, if required.

Basket sizes, calculations of leverage ratios and incremental financing capacity in direct lending documents are also becoming less and less distinct from those in syndicated loans, although direct lenders have begun to hold more ground on terms of late in the wake of the broad disruption in the syndicated markets, which has enhanced their leverage.

In addition to revisiting some of the flexibility in documentation, lenders have also pushed on pricing as a way to mitigate risk. According to Debtwire Par, average margins on first-lien institutional term loans reached 4.31 percent in Q2 2022, well ahead of the first-quarter average of 3.96 percent.

Credit quality has been a key determinant of pricing, with a gap opening between higher and lower-rated credits. For higher-rated borrowers with double-B ratings, margins decreased over April and May. Weaker-rated credits, by contrast, have found it much more challenging to clear syndication and have been forced to price debt generously to persuade investors to come on board. Borrowers with single-B ratings saw margins climb to almost 5 percent in Q2 2022 from 4.18 percent in Q1 2022.

Wider original issue discounts (OIDs) have also become a standard feature of deals in the first half of 2022 to compensate investors for increased risk, and they have moved in lockstep with the falling prices in secondary markets. According to Debtwire Par, discounts averaged 48 bps in January 2022, but jumped to 473 bps in June as the average issue price of new loans slid to 95.27 percent of par. OIDs continue to deepen, with some new issues now proceeding with OIDs in the high 80s to low 90s.

With interest rates expected to continue climbing, higher pricing is already becoming established as a feature of the market for the medium to long term. Moves toward tighter documentation could follow suit.