Loan issuance for buyouts climbed in the first half of the year, reaching US$94.5 billion

Lender appetite for US buyout opportunities remained resilient in the first half of 2022 despite a volatile macro-economic backdrop and a decline in activity across the wider leveraged finance market.

The high yield bond space did not fare quite as well, as inflation and climbing interest rates pushed many investors to find safer alternatives. After a very strong first quarter, in which there was US$7.4 billion in high yield bond buyout issuance—up more than 80 percent, year-on-year—the second quarter saw just US$1.7 billion in additional issuance for these purposes.

Despite a tougher market, buyout deals of significant scale were completed in the first half of 2022. In February, 3G Capital priced a US$5.36 billion-equivalent loan package to fund its buyout of window coverings manufacturer Hunter Douglas.

That same month, government contractor Amentum progressed with a US$2.26 billion term loan facility to finance its purchase of fellow contractor PAE from Platinum Equity and the Gores Group.

Loan and bond issuance linked to buyouts, however, has not been immune to market uncertainty sparked by events in Ukraine and rising inflation and interest rates. While buyout issuance figures recorded in the first half of 2022 look good, they benefited from a pipeline of deals launched in 2021 that closed in the first three months of 2022.

As geopolitical and macro-economic risk intensified, however, getting buyout debt packages over the line has become more challenging. Underwriting banks and institutional investors, as a whole, have taken a somewhat more conservative stance on funding highly leveraged, sub-investment-grade buyout credits.

According to Debtwire Par, both average OIDs and loan margins have widened materially since the start of the year, and this pricing pressure can be seen in several deals that have closed in the first half of the year. For example, Syniverse Technologies completed a US$1.025 billion term loan B (TLB) to refinance debt in connection with the company's minority stake acquisition by Twilio. The TLB, due in 2027, priced at SOFR + 700 bps, up from initial guidance of SOFR + 500­­–525 bps. 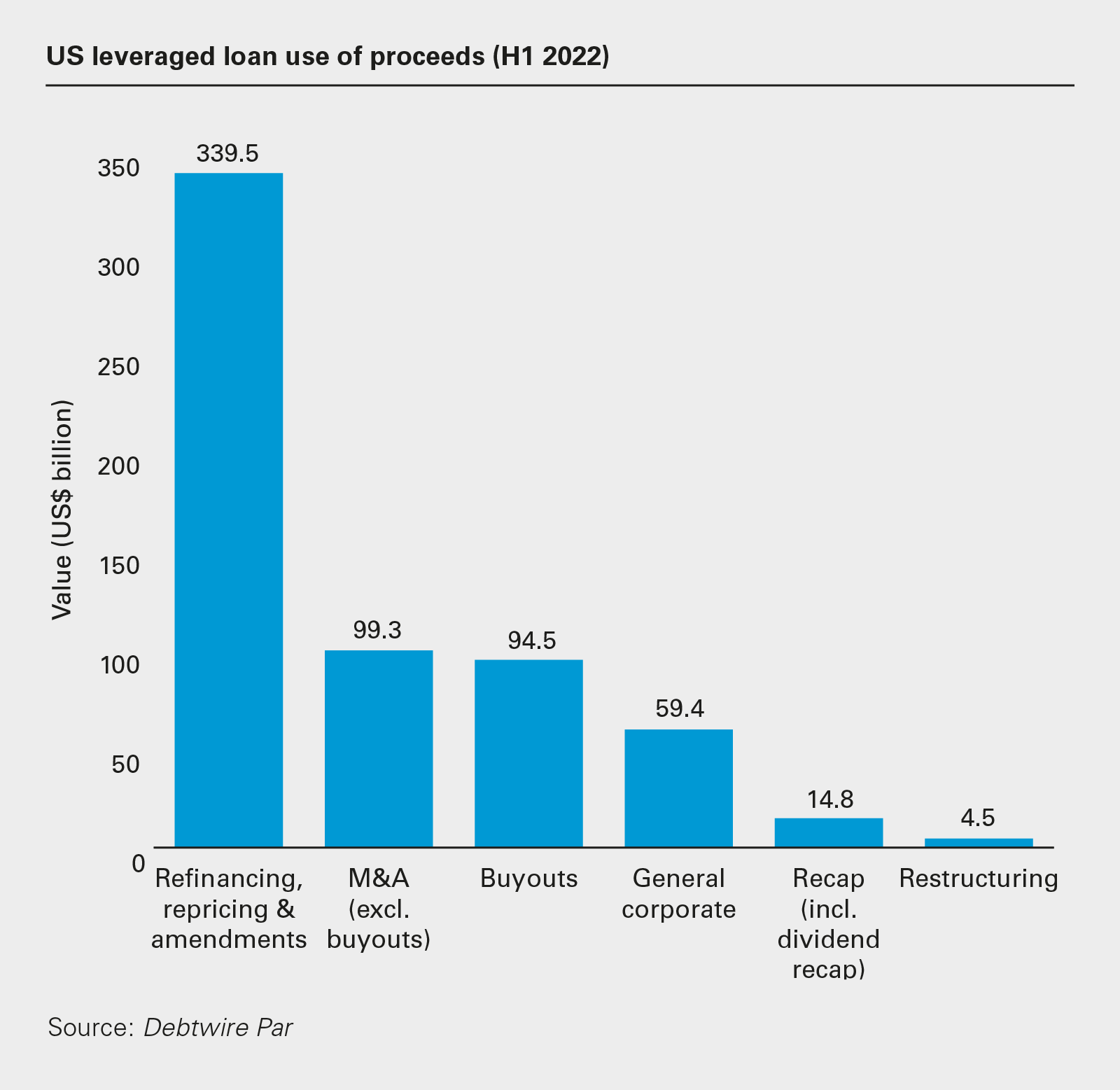 According to Bain & Co., private equity dry powder still sits at record levels, compelling buyout firms to maintain deployment. This has sustained buyout deal volumes even as wider M&A markets have cooled and may well drive additional buyout issuance in H2 2022 if financing sources come to the table.

While M&A deal value in the US, excluding buyouts, slid by more than 20 percent in H1 2022, year-on-year, buyouts worth US$235 billion were announced during the same period, according to Mergermarket—still far above pre-pandemic levels going back to 2007.

Even though leveraged finance markets have cooled, investors remain on the lookout for high-quality credits backed by familiar sponsors. Deals can still be financed, but the quality bar is higher, and financing is likely to be pricier. 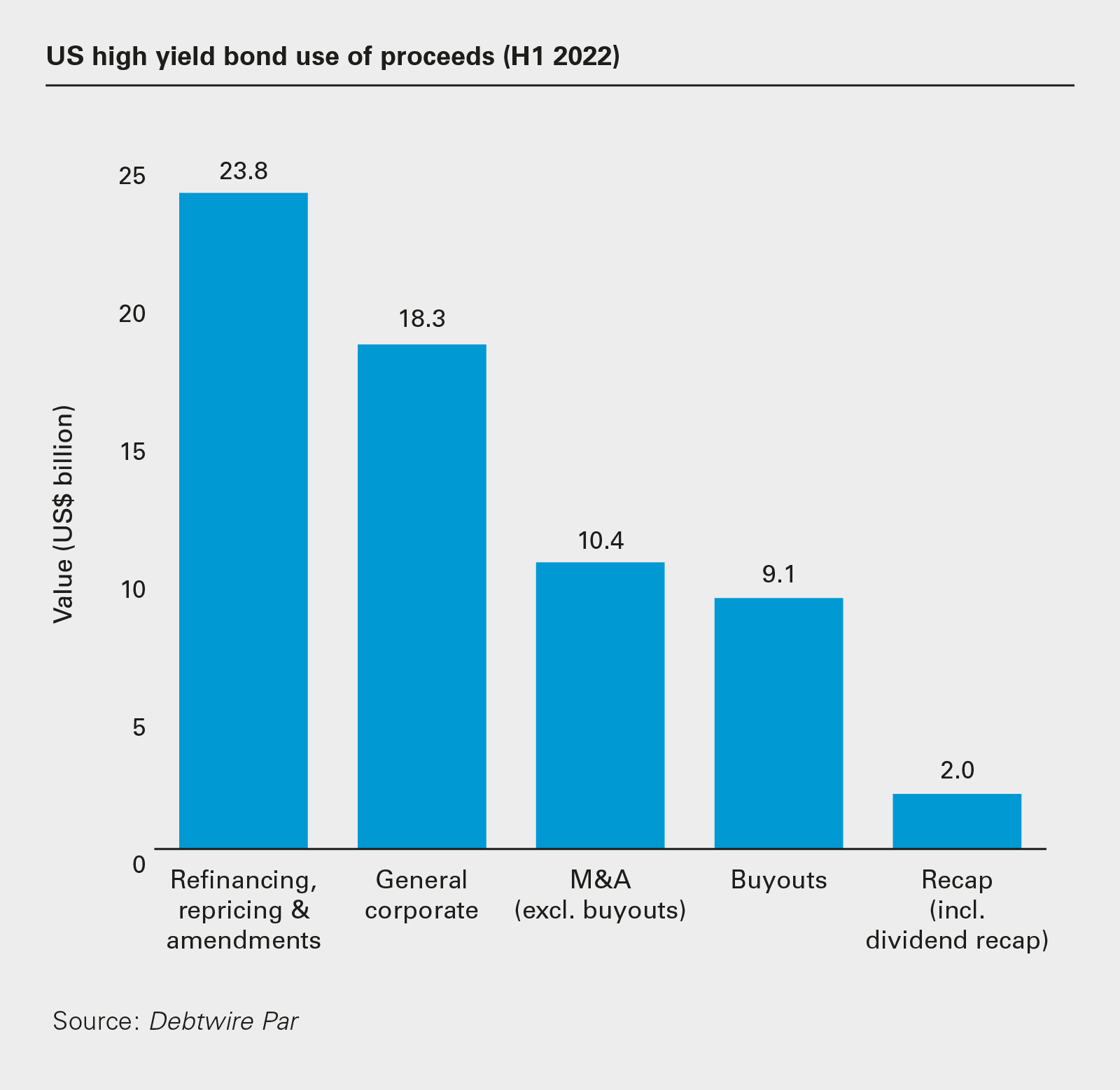 The most significant shift in buyout deal financing since the start of the year, however, has been the growing prominence of direct lenders on deals of increasing scale.

In the past couple of years, however, the direct lending option has become increasingly compelling for financial sponsors in a volatile market, and this trend has accelerated in 2022.

Unlike leveraged finance markets, where banks underwrite loans and then sell down tranches to investors, direct lenders underwrite and hold credits. For sponsors, this removes syndication risk and delay, with direct lenders providing greater certainty of execution and terms.

Sponsors have also noted that the gap in pricing between the two products has narrowed. Direct lenders may ask for a higher price up front but, once OID and price flex in syndication are factored in, the gap in pricing is often minimal, with many sponsors finding that any direct lending premium is worth paying to remove syndication risk.

Direct lenders have also grown their assets under management in the past decade. With Preqin putting private debt dry powder above US$1 trillion (up from US$400 billion in 2008), these lenders have more firepower at their disposal and are capable of digesting much bigger credits.

It has become increasingly common for financial sponsors to run dual-track processes looking at both leveraged loan and bond options alongside what direct lenders can offer.

In some cases, buyout firms are bypassing syndicated loan and high yield bond markets altogether. In 2021, Thoma Bravo financed 16 of its 19 buyouts with direct lenders, according to Reuters. It secured a US$2.6 billion debt financing deal in March from a club of direct lenders, including Owl Rock Capital, Apollo Global Management, Golub Capital and Blackstone Credit, to fund its US$10.7 billion buyout of Bay Area software company Anaplan.

Despite a volatile and uncertain market, financial sponsors are finding that they still have several options available when it comes to funding deals.