The headline for the first half of 2022 is that US M&A markets are still remarkably healthy, despite a confluence of headwinds. Without question, 2021 was an exceptional year, fueled by pent-up demand, historic levels of liquidity and an explosion of de-SPAC activity. The S&P 500 rallied to new highs and debt financing was in abundance, arguably overabundance.

Some deal fatigue set in as markets peaked in Q4. This year so far has experienced an ebb to a more sustainable flow of activity but, importantly, aggregate M&A value still remains above pre-pandemic levels. A continuation of 2021 was never realistic, and the US M&A market is now moving at a more rational pace as equity markets trend back down from the adrenalized run witnessed from mid-2020 through 2021.

There was US$995.3 billion worth of deals in H1, down 29 percent on the record US$1.4 trillion in the same period last year. Mitigating for the impact of the pandemic, this year’s performance almost exactly matches that of H1 2019 (US$996 billion). This comes with a caveat. There was a relatively sharp drop-off in the volume of deals made in the second quarter.

While still following a high trend line, there were 22 percent fewer deals in Q2 versus Q1 (1,677 and 2,141, respectively). For perspective, the fall in volume between Q1 and Q2 2020, which captures the initial impact of the COVID crisis, was 43 percent. This is something to keep a close eye on as the year progresses.

The current environment presents a number of challenges. Post-pandemic growth is faltering, as inflation bites and the Federal Reserve has set out a path of monetary tightening that includes both rising interest rates and the shrinking of its balance sheet, reversing the historic quantitative easing that sought to stabilize markets and backstop the economy.

M&A markets showed signs of softening as the year progressed. However, there have been some exceptionally large plays among corporate buyers. These transactions reflect the willingness of these parties to follow through on their strategic priorities and look past today’s short-term macro-volatility.

Private equity has been remarkably consistent, considering the circumstances. Across the first half, sponsors represented 42 percent of all US M&A value, consistent with last year (41 percent). The industry has also held its own on a volume basis.

Financial sponsors are nonetheless more exposed to the higher-rate environment than their corporate peers.

Rates may not be high on a long-term historical basis, but what counts here is the pace of change. As recently as February, the Federal Funds Effective Rate was a mere 0.08 percent. By June, it was 1.21 percent. Although this is still quite a low rate in absolute terms, it represents a more than 1,400 percent increase in relative terms—the sharpest rate of change in at least six decades.

Spreads are widening as debt investors demand a higher risk premium. This is felt most acutely in the leveraged finance markets. The higher cost of financing for PE dampens the attractiveness of exit bids.

The silver lining here for PE amid higher debt costs is that EBITDA multiples have compressed. Private equity still has piles of dry powder sidelined, even if funds may be required to write higher-equity tickets in the near term than they are accustomed to. 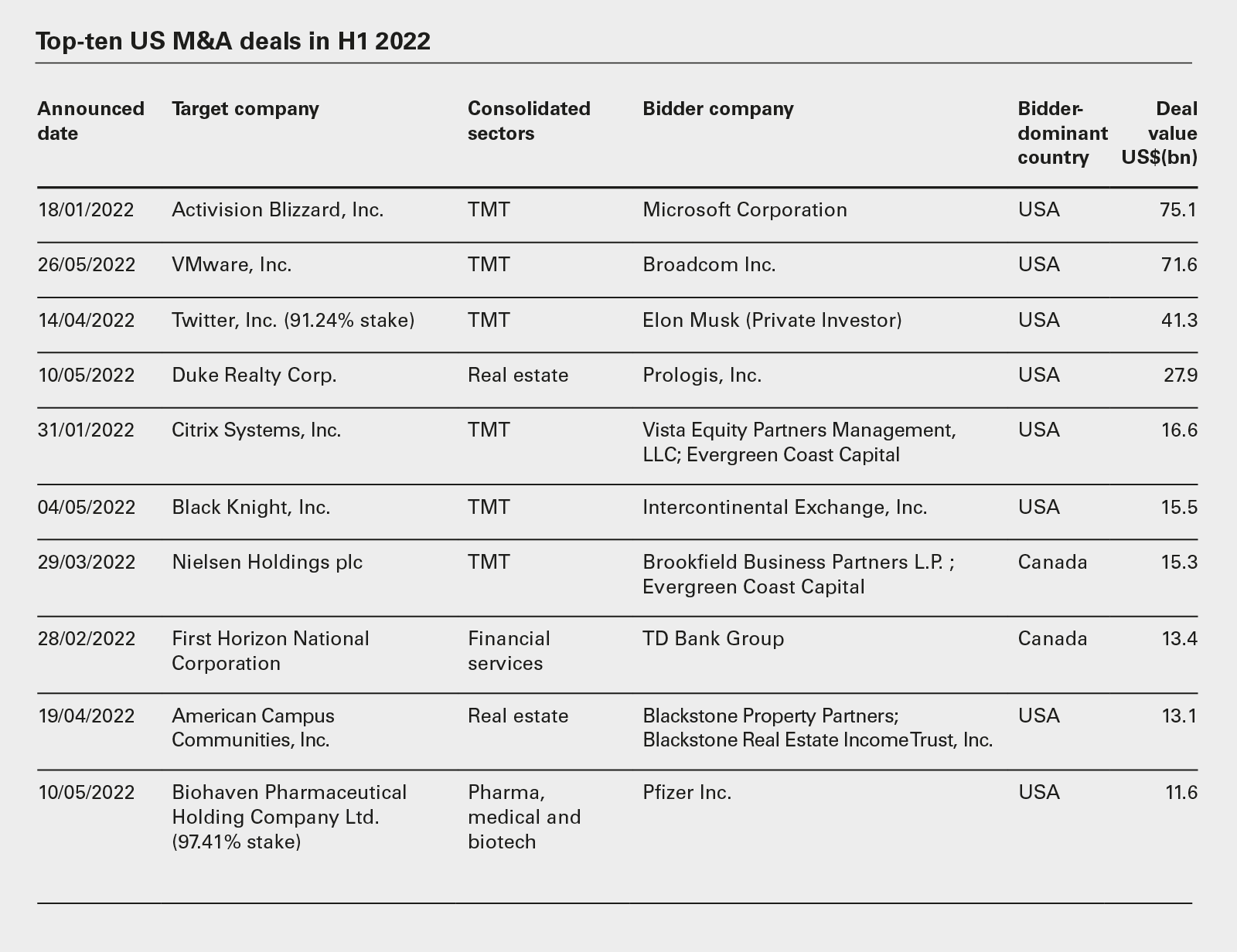 Short term, this puts companies at an advantage. Although PE generally has a higher risk tolerance, corporate buyers have the capacity to pay a premium owing to their strategic rationale for deals and synergies. In an uncertain environment, PE can walk away from heavily competitive auctions since it has more optionality.

However, regulation is playing a major role in deal outcomes. The very largest corporate acquisitions are typically global and carry considerable antitrust risk. The largest deal of Q2 was a US$71.6 billion tie-up between chipmaker Broadcom and cloud software business VMware, two US companies. The transaction is currently subject to a lengthy antitrust investigation by the EU and it could be a year before the deal closes.

The Biden administration is similarly committed to increasing antitrust enforcement and that commitment shows no signs of wavering, especially given the relevance of preserving competition and curbing further rises in consumer prices amid decades-high inflation.

Turning to the second half of 2022, we anticipate that in the coming months volume may continue at the same pace as it did in Q2, especially factoring in the summer lull. Toward the end of the year, markets should have digested the brunt of the interest rate change and inflation will by then hopefully be coming under control, improving consumer sentiment and investor confidence. No one can predict the future; however, US M&A has so far shown considerable resilience in the face of adversity and appetite remains strong, as acquirers double down on their due diligence and take the long view.

With Biden’s signature Build Back Better legislation hitting roadblocks in 2021, talks of a tax reform overhaul were widely written off, until the surprising development involving the Inflation Reduction Act of 2022, which was recently passed by the Senate and the House, and is expected to be signed by President Biden in short order. The act revives parts of the tax legislation proposed in Build Back Better as part of a larger bill also addressing energy, climate, healthcare and prescription-drug policy. As a reconciliation bill, Senate Democrats were able to avoid a Republican filibuster and pass the act with a simple 51-vote majority.

In particular, the new legislation includes a 15 percent corporate minimum tax on corporations with average applicable financial statement income in excess of US$1 billion during a three-year (or in certain circumstances, shorter) measurement period. Note that this is separate from the 15 percent worldwide minimum levy deal that Treasury Secretary Janet Yellen, together with her counterparts abroad, are lobbying to enact in more than 130 countries, which has not gained traction in Congress.

A prior version of the bill had extended the current three-year holding period required to achieve favorable long-term capital gain treatment for carried interest payable to private equity fund managers to five years, subject to certain exceptions. This proposal was ultimately dropped in the final version in exchange for the one percent tax on buybacks.

Significant guidance from the IRS and Treasury will be necessary, and is expected, to administer the new tax legislation. For example, the buyback tax currently has broad applicability, and the statute grants the Treasury express authority to “address special classes of stock and preferred stock.” Many public corporations, and in particular US SPACs, where shareholders have the option to redeem their shares in connection with a business combination, will be looking to the IRS and Treasury for greater clarity as to the scope of these rules.

Fueled by investor, consumer and regulatory pressure, decarbonization has become a central component of business strategies across the globe. As such, it is now a major driving force behind US dealmaking, and it is rare for parties in an M&A transaction to not have a commitment to strengthen the global response to climate change threats and support a just energy transition. Nor are environmental, social and governance (ESG) issues seen only as a risk mitigation exercise when it comes to M&A—instead, businesses are increasingly seeing it as an opportunity to create value.

One such example is Tier Mobility’s acquisition of electric bike and scooter operator Spin, which marks the European shared micro- mobility provider’s expansion into the US. Through initiatives such as modernizing the Spin fleet with 100 percent swappable batteries, the partnership aims to improve environmental sustainability in the US micro-mobility industry.

Within this context, environmental diligence has taken on a whole new level of importance in the dealmaking process. Buyers need to gain an understanding of the integrity of their deals—if it cannot be proven, it runs the risk of attracting regulatory scrutiny.

Regulation on the rise

In March of this year, the SEC proposed new rules requiring more extensive disclosure of climate-related information in its SEC filings. In May, it proposed further regulation seeking to standardize disclosures related to ESG factors considered by funds and advisors.

The SEC’s new requirements would require integration with a public company’s internal controls and audit functions. Nevertheless, litigation challenging the SEC’s authority is likely if the proposed rules are adopted.