The US enjoyed record levels of M&A activity in H1 2021, as dealmakers made up for lost time caused by pandemic-related disruptions

After a brief disruption caused by the COVID-19 pandemic, US M&A has not only returned to form—it has gone beyond previous heights. There were 3,519 US M&A transactions in H1 2021, worth US$1.27 trillion, representing a 38 percent jump in deal volume and a striking 324 percent spike in deal value compared to H1 2020. Not only was this a massive year-on-year increase in value, it represents the highest half-year total on Mergermarket record (since 2006) and matches the total value achieved in all of 2020 (US$1.27 trillion).

US deal activity has been supported by a positive macroeconomic backdrop, with a combination of factors driving M&A. According to the US Bureau of Economic Analysis (BEA), the US economy grew by 6.4 percent, while the IMF is forecasting that US GDP will see annual growth of 6.4 percent in 2021 and 3.5 percent in 2022. A successful COVID-19 vaccination roll-out and an expansive economic stimulus plan, cornerstoned by the Biden Administration's US$1.9 trillion stimulus package, have added to the economic momentum.

In a sign of confidence in the economic rebound, the Federal Reserve indicated in June that it expects to raise interest rates in 2023, after previously signaling that it expected to keep rates at near zero until at least 2024. US stock markets have also been on an upward trajectory. After reaching record highs at the end of 2020, the Dow Jones Industrial Average and S&P 500 continued to rise. Gains were strong through H1 2021, with the Dow Jones and S&P 500 showing gains of more than 13 percent and 16 percent respectively for the year to date.

Debt markets have also been strong, and alongside low interest rates, have ensured that an abundant supply of liquidity has been available to finance transactions. According to White & Case's Debt Explorer, high yield bond and leveraged loan issuance in the US rose to US$545.1 billion at the end of Q1 2021, an increase of more than 37 percent year-on-year.

Technology, media & telecoms (TMT) and pharma, medical & biotech (PMB), the two sectors that proved most resilient throughout the pandemic, have remained among the most popular industries for deals and together accounted for six of the ten largest US deals in H1 2021.

The largest US M&A deal of H1 2021, by some distance, was Discovery's proposed acquisition of Warner Media for more than US$96.2 billion. The deal is expected to create the second-largest media company by revenue after Disney. Scale has become increasingly important in the competitive streaming market, which benefitted from the double-digit increase in media consumption observed in the second half of 2020. 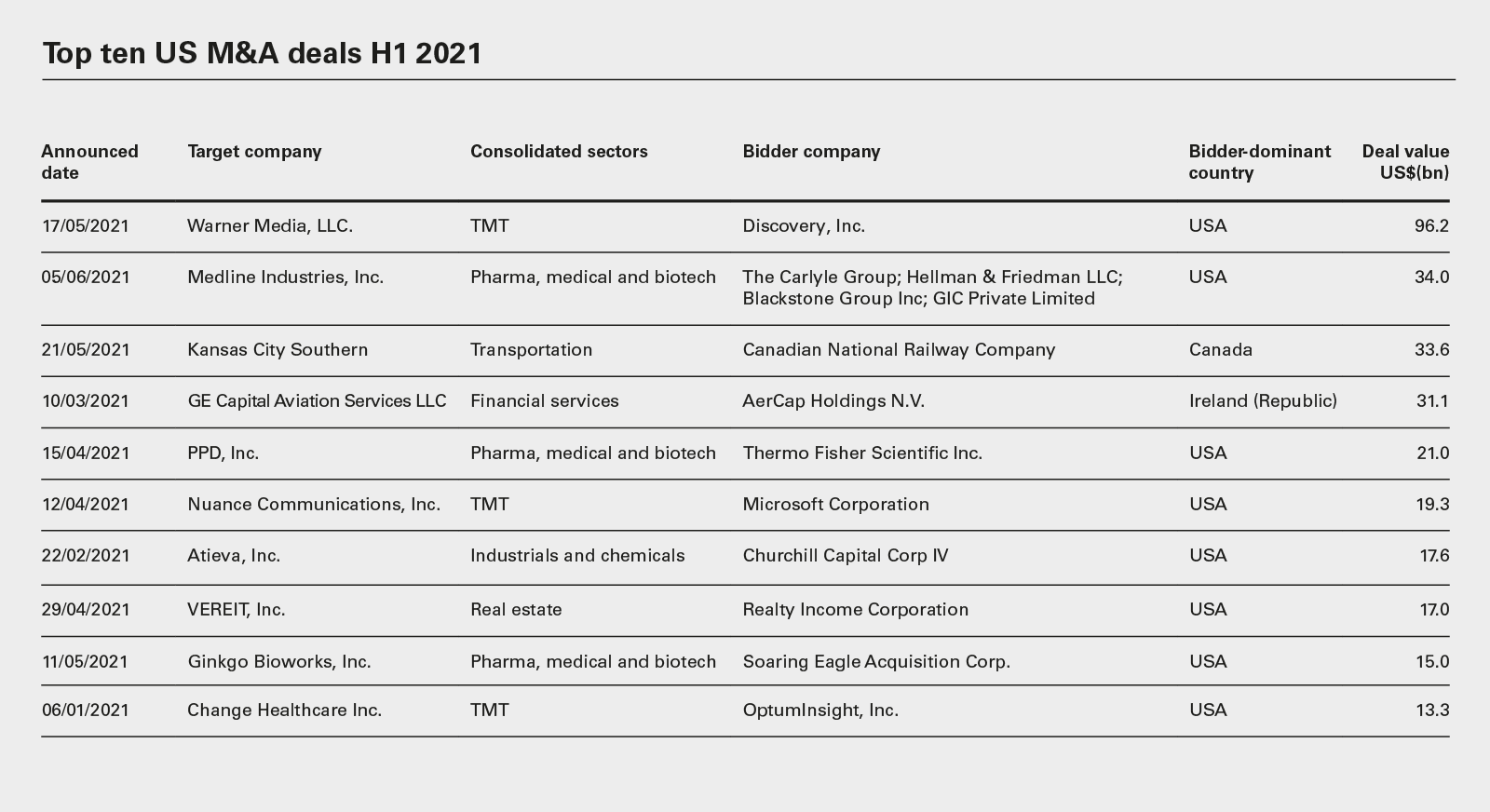 The second-largest transaction of the year was the US$34 billion sale of Medline Industries to a PE consortium comprising The Carlyle Group, Hellman & Friedman, Blackstone and Singaporean sovereign wealth fund GIC. The deal demonstrates both the attractiveness of the healthcare industry as the economy transitions out of the COVID-19 pandemic, as well as the strength of the PE industry—the deal is the largest US PE deal since the financial crisis, as well as one of the top PE buyouts ever.

In addition to the presence of cash-rich PE players and resilient activity in TMT and PMB, the progress of megadeals (worth US$5 billion or more) has provided another positive indicator of a recovering market. Such deals accounted for 44 percent of all US M&A deal value in H1 2021—in contrast, they made up only 28 percent of deal value in H1 2020. More jumbo deals point to a confident market where buyers have the conviction to invest large amounts in big-ticket transactions.

Outbound M&A continued to show strong signs of recovery from the COVID-19 pandemic. Total outbound cross-border deal value came to US$380 billion for the first half of 2021. This represented a 192 percent year-on-year rise and a 59 percent rise on the second half of 2020. Outbound volume for the year so far has increased by 64 percent year-on-year to 939 deals and is 38 percent higher than in the previous six months.

The picture for inbound activity has been more nuanced, with the Biden Administration maintaining the US government's hawkish stance on inbound investments into strategically sensitive industries such as defense, utilities and technology on national security grounds. 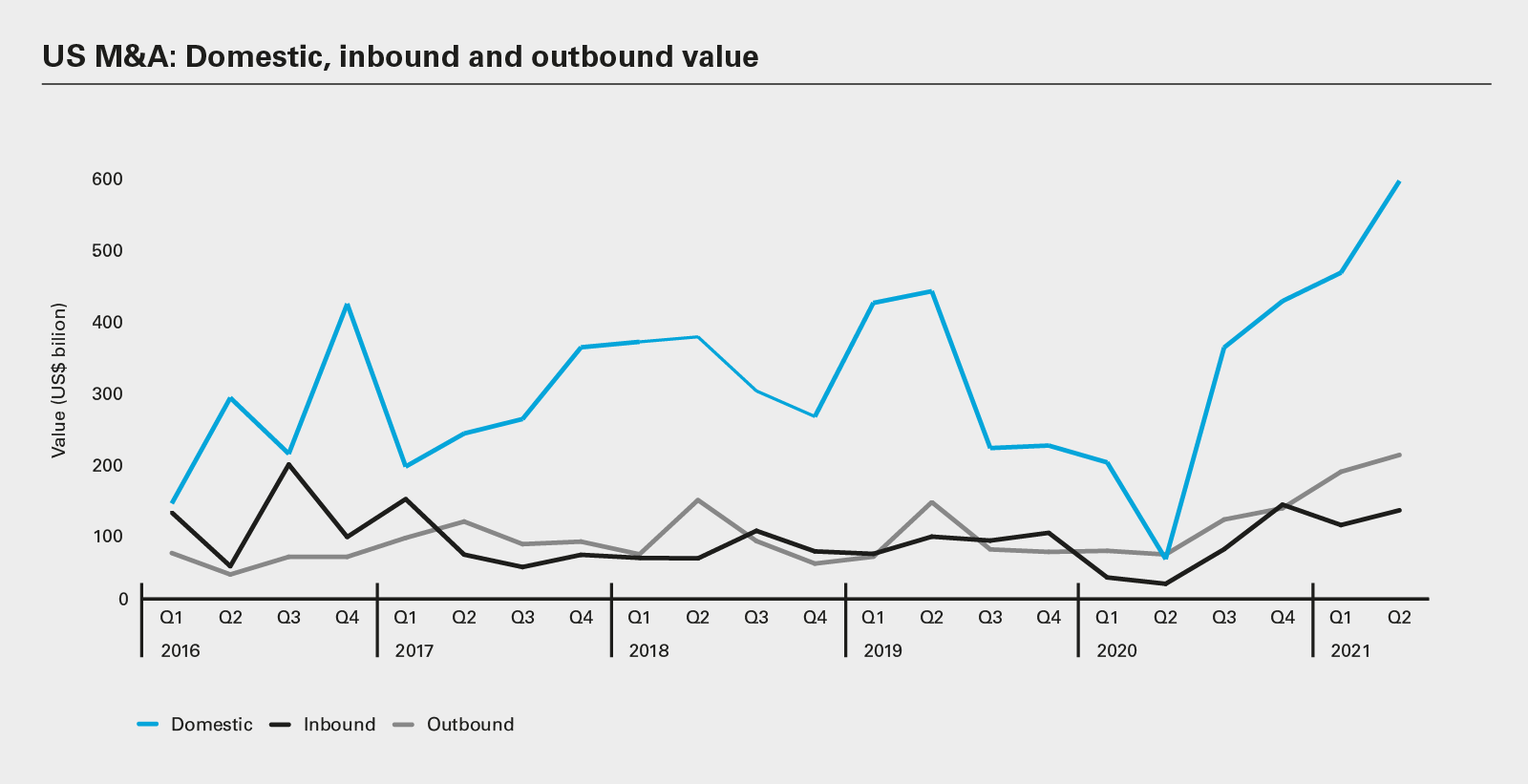 SPAC IPO issuance has hit record levels over the last 18 months. In 2020, SPACs raised unprecedented sums of capital on US stock exchanges, with 248 SPACs securing US$82.6 billion.

Regulatory woes on the horizon

Over the longer term, the tougher antitrust stance from the Biden Administration could impact M&A in the technology industry. Biden has appointed Lina Khan, one of the most vocal critics of big tech, as chairperson of the Federal Trade Commission (FTC) and Congress has put forward a package of measures that, if enacted, could significantly affect tech companies. For now, however, tech remains the most active and popular sector for dealmaking in the US.

The SPAC boom could also attract greater regulatory scrutiny. SPACs are blank check companies that raise funds on stock markets that are then earmarked for acquisitions. SPAC IPO issuance has hit record levels over the last 18 months. In 2020, SPACs raised unprecedented sums of capital on US stock exchanges, with 248 SPACs securing US$82.6 billion. Before the end of Q1 2021, that had already been surpassed, with 298 SPACs raising US$96.8 billion, according to data from Dealogic.

The increase in SPAC activity has led the Securities and Exchange Commission (SEC) to state that it could introduce additional protections for retail investors.

Pandemic uncertainty and market dislocation appear to have had minimal impact on deal activity in the blockchain space.

The sector may still be nascent, and valuing blockchain assets is challenging because many are developed by early-stage companies that are pre-profit and pre-revenue—which comes with high financial risk. But expectations of rapid growth in the use of blockchainpowered technology have prompted institutional investors, private markets fund managers and corporates to pay closer attention to the space and look for opportunities to acquire and fund assets that put them in a position to capitalize on blockchain's upward trajectory.

According to PwC, M&A in the crypto sub-sector alone more than doubled year-on-year to US$1.1 billion in 2020. Much of this activity was in the US, which accounted for close to US$800 million of crypto deal value. Average deal size for cryptocurrency assets, meanwhile, almost tripled from US$19.2 million to US$52.7 million. PwC forecasts show that 2021 crypto M&A is already on track to surpass the record levels of activity observed in 2020.

Cryptocurrency has been the primary driver of blockchain dealmaking, with the asset class moving firmly into the mainstream. Central banks are now looking at frameworks for issuing central bank digital currency, with US Federal Reserve Chair Jerome Powell sketching out plans for a potential "digital dollar." Payments platforms are also moving to facilitate crypto transactions, with PayPal acquiring Israeli crypto security start-up Curv, allowing users to trade Bitcoin and other virtual currencies across its platform.

But the sector remains volatile and unpredictable. The price of Bitcoin, for example, rose from about US$10,000 in July 2020 to more than US$60,000 by April 2021. The price then fell precipitously in May and bounced around the US$35,000 mark in June.

Regulation is a concern too, as authorities come to grips with blockchain technology generally and cryptocurrency in particular, and their impact on security, the economy and financial markets. New SEC chair Gary Gensler wants to bring the regulation of cryptocurrency in line with other financial instruments and the Treasury has put rules in place requiring cryptocurrency transfers of US$10,000 or more to be reported to tax authorities.

Blockchain dealmaking comes with a unique set of challenges, but for now, M&A investors see large enough rewards on offer in this rapidly growing industry to justify the risks.

US-based venture-backed businesses raised more than US$62 billion in Q1 2021, a 117 percent year-on-year increase and 62 percent rise on figures for Q4 2020, according to a report released by PwC and CB Insights. This represents an all-time quarterly high.

Venture capital managers have also displayed the confidence to back an increasing volume of mega funding rounds worth US$100 million or more. According to PwC and CB Insights, there were a record 184 mega funding rounds in the US in Q1 2021, worth an all-time high of US$39.8 billion.

US venture activity has been supported by a fertile environment for exits. With the Dow Jones, Nasdaq and S&P 500 all cresting record highs in February 2021, and remaining stable subsequently, managers have been able to successfully exit assets via the stock market, both through traditional IPOs, but also through direct listings and SPACs. A buoyant M&A and private equity market is also helping to create a positive landscape for VC exits.

According to the most recent National Venture Capital Association (NVCA) and PitchBook Venture Monitor report, venture capital firms secured around 447 exits in Q1 2021 with exit value reaching US$118.1 billion during the first three months of the year. This is the third-highest quarter for exit value since the beginning of 2021.

VC investors have landed a number of high-profile exits at sizable valuations. Gaming app Roblox was valued at US$38.2 billion following its direct listing on the New York Stock Exchange, and SentinelOne achieved the highest cybersecurity IPO on record with a market capitalization in excess of US$10 billion when it floated in New York.

With the US economy reopening and COVID-19 restrictions lifting, venture capital managers are expected to continue deploying capital and exiting investments in high volumes.