US dealmakers expect uptick in M&A, but no swift return to pre-crisis levels

A majority of dealmakers say their companies are focused on defense or survival, but about a quarter are actively pursuing growth.

According to Mergermarket, the value of US M&A in the second quarter of 2020 was lower than any other quarter since it began tracking deals in 2006. Compared to Q2 2019, value was down 87 percent. Volume plunged as well, though not as much. But things began to change in the third quarter. In fact, the value of M&A in August was more than two times that of January. The number of deals in August, conversely, was down by more than half compared to January (Figure 1)

These figures would seem to suggest that US M&A is back, at least at the higher end of the market. But there is so much uncertainty about where the pandemic is heading and when the economy will recover that it is hard to know what to expect.

To get a better sense of what may be coming for US M&A in the next six to 12 months, we conducted a survey of 250 senior M&A executives, representing large US companies in more than ten sectors. These are people who have a deep understanding of their companies’ plans for dealmaking. The survey took place between August 17 and 24 of this year.

We came out of the survey with four main findings, which serve the backbone of this article:

Responses to this survey confirm our belief that M&A will be a critical lever for companies as they manage their way through the crisis, whether they are primarily concerned with survival or growth. We thank everyone who participated, and we welcome any thoughts you may have about the article. Please let us know what you think. 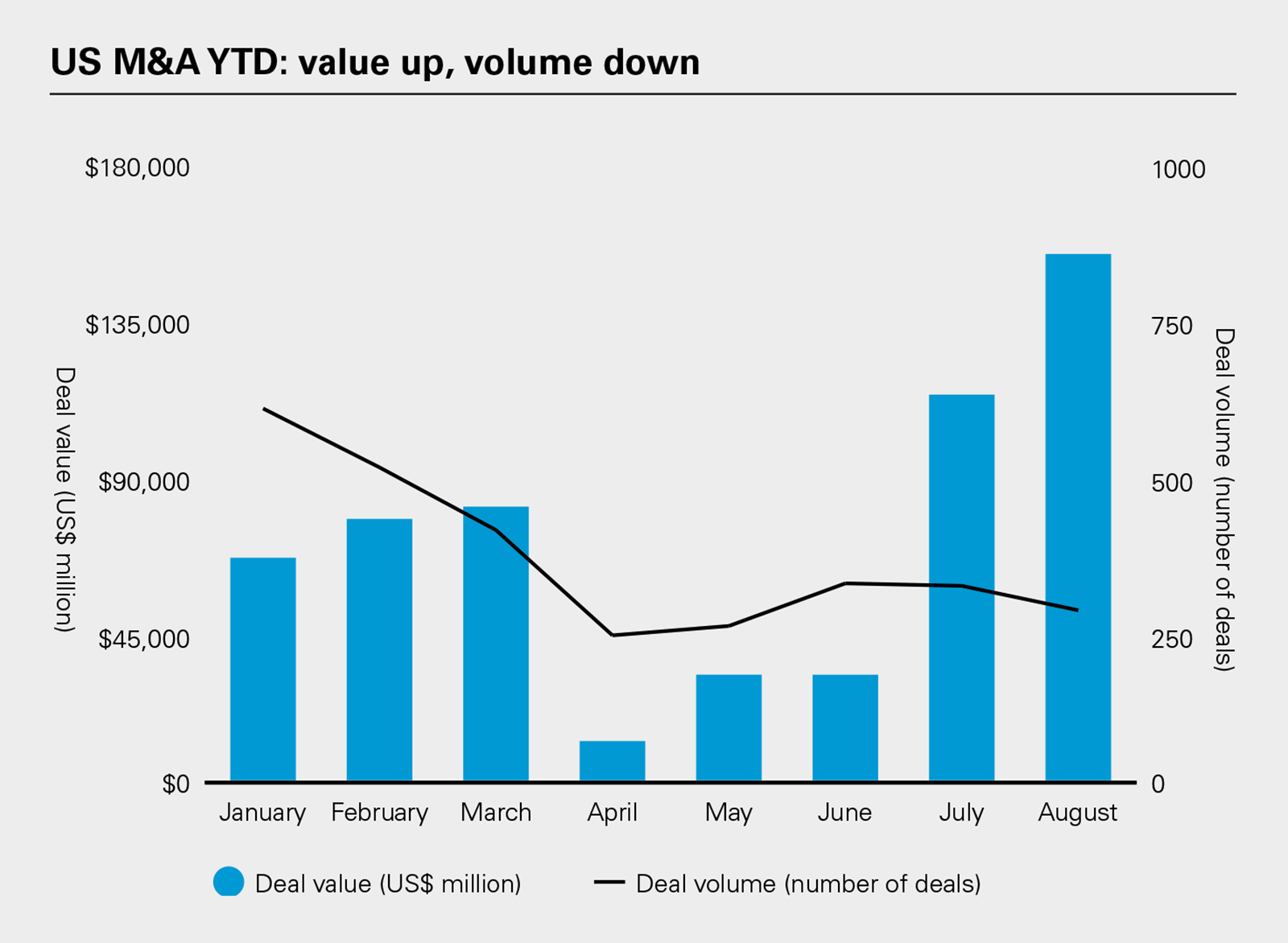 View full image 'US M&A YTD: value up, volume down'

Almost three quarters of executives said they expect their companies to execute more deals in the next 12 months than they did in the previous 12 months.

Companies in the banking and financial services sector may be most active: 83 percent of executives in this sector expect their companies to increase M&A activity, followed by the pharmaceuticals and healthcare (73 percent), retail and consumer packaged goods (71 percent), and industrials (68 percent) sectors.

Of course, all this comes on the heels of sharp declines in activity. Value in the second quarter of 2020 dropped 87 percent compared to Q2 2019, and volume fell 51 percent.

Indeed, it seems executives do not expect a quick return to pre- COVID-19 deal levels. Compared with their pre-crisis M&A plans, 58 percent of executives say their companies have either put all M&A activity on hold or have scaled back their plans. Just 9 percent have increased activity. 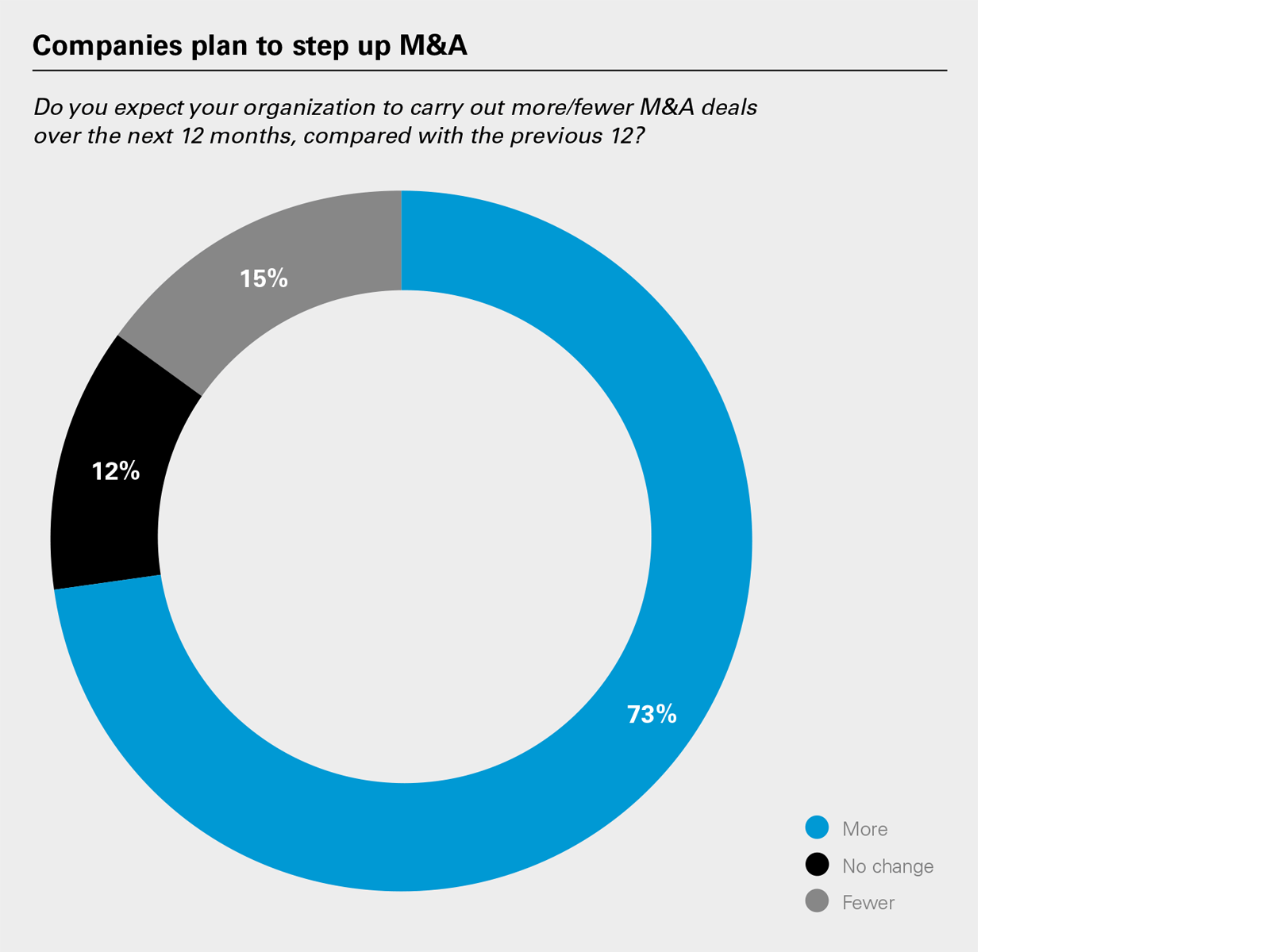 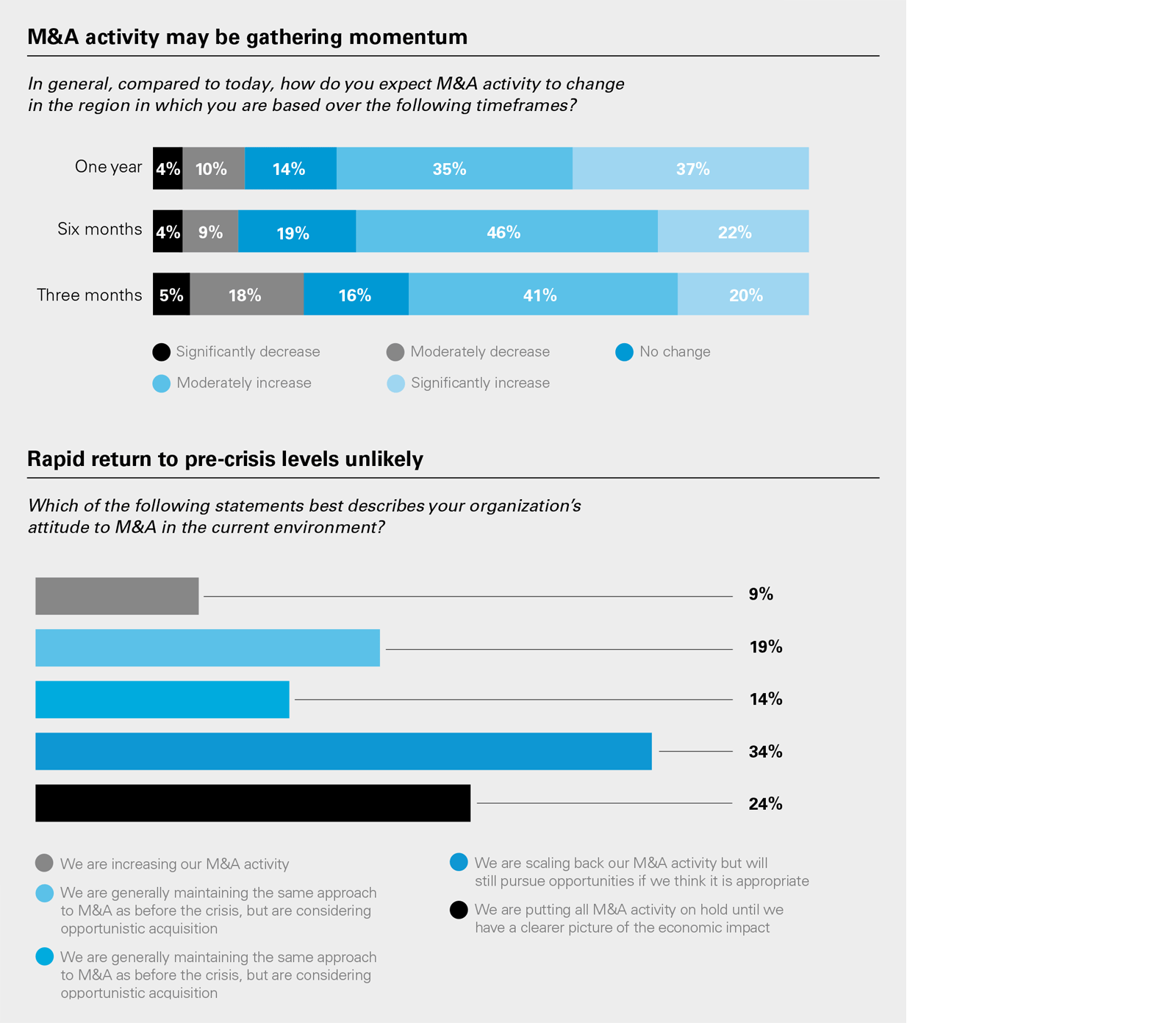 Streamlining will stimulate dealmaking as businesses fight to survive

When asked about their top business priorities, about three-quarters of executives indicated that they expect their companies to focus mostly on defensive moves.

In contrast, 21 percent say their companies are positioning themselves for growth post-crisis; just 7 percent are actively looking for buying opportunities.

This sentiment reflects the precarious state of the economy. But it also gives support to the view that many sectors may be set for a period of consolidation, as companies with resources sweep up assets from those seeking stability.

Large companies with deep pockets may seek to grow through acquisitions, in some cases to improve margins through synergies in the face of reduced demand. Deal data suggests a trend in this direction. Heading into fall, we saw the return of the megadeal, with overall deal value rising month-tomonth and deal volume falling, as noted in the introduction. And deals often beget deals as buyers seek to divest parts of businesses that were bundled in an acquisition but that they don’t actually want to keep.

View full image 'Survive and defend are top priorities for most' 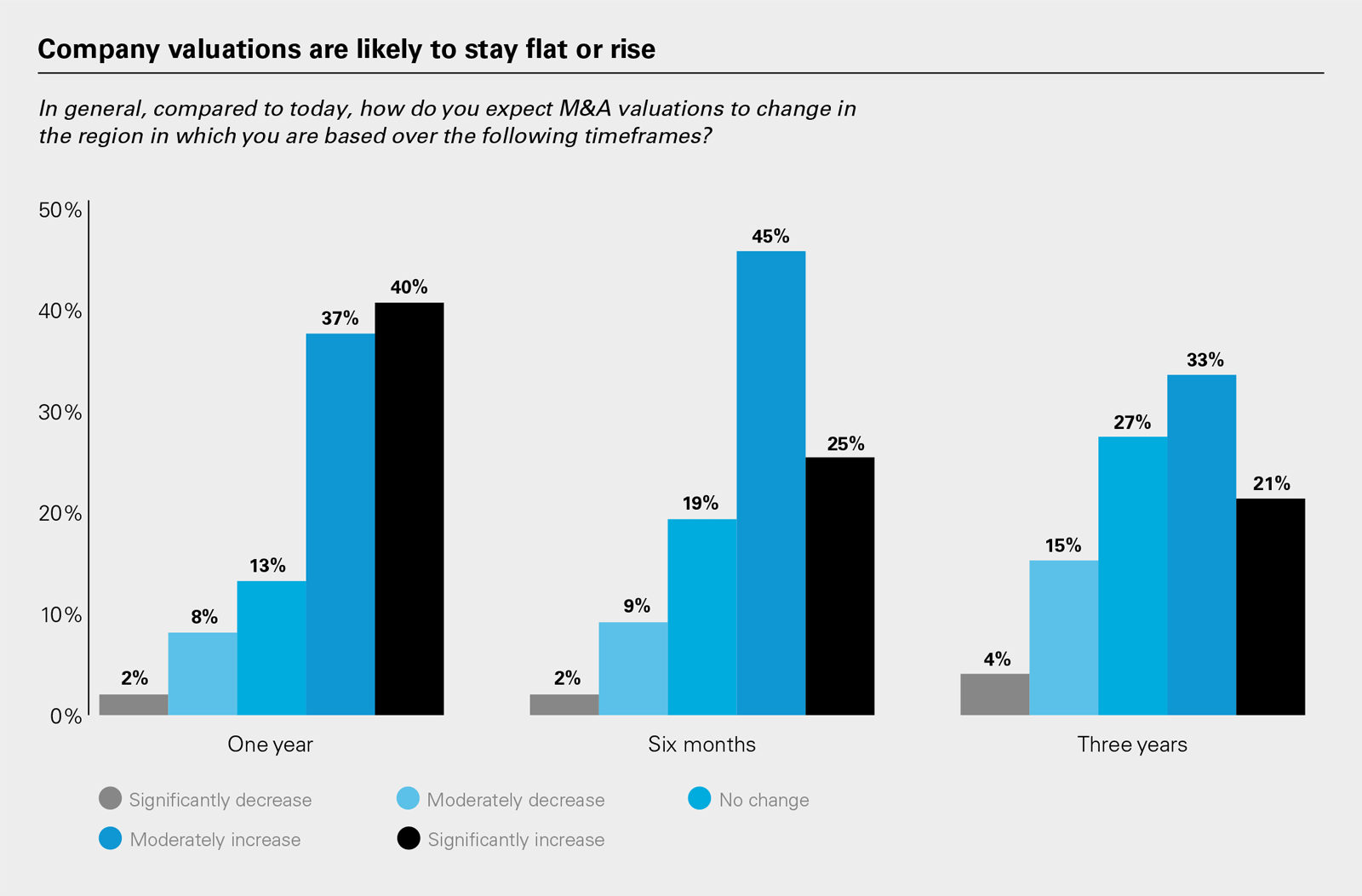 Internationally, US dealmakers are most interested in the UK and China, despite geopolitics

US executives identified the UK and then China as the international markets where they see most deal opportunities: 35 percent of executives selected the UK, and 22 percent selected China.

Interest in the UK is driven by banking and financial services: 43 percent of executives from this sector picked the UK as the market where they see the most significant deal opportunities, despite continuing Brexit uncertainty.

Interest in China is primarily driven by companies in the industrials, power and utilities, and infrastructure and real estate sectors: 29 percent of executives in these sectors selected China as the market where they see the most significant deal opportunities, despite continuing tensions related to foreign direct investment and national security.

An increase in M&A activity with China would buck a trend of loosening ties during the last three years, particularly as the US has raised the bar for national security review on deals involving foreign buyers. Chinese businesses only acquired 18 US businesses in 2019, compared with 36 in 2018 and more than 63 in 2017. 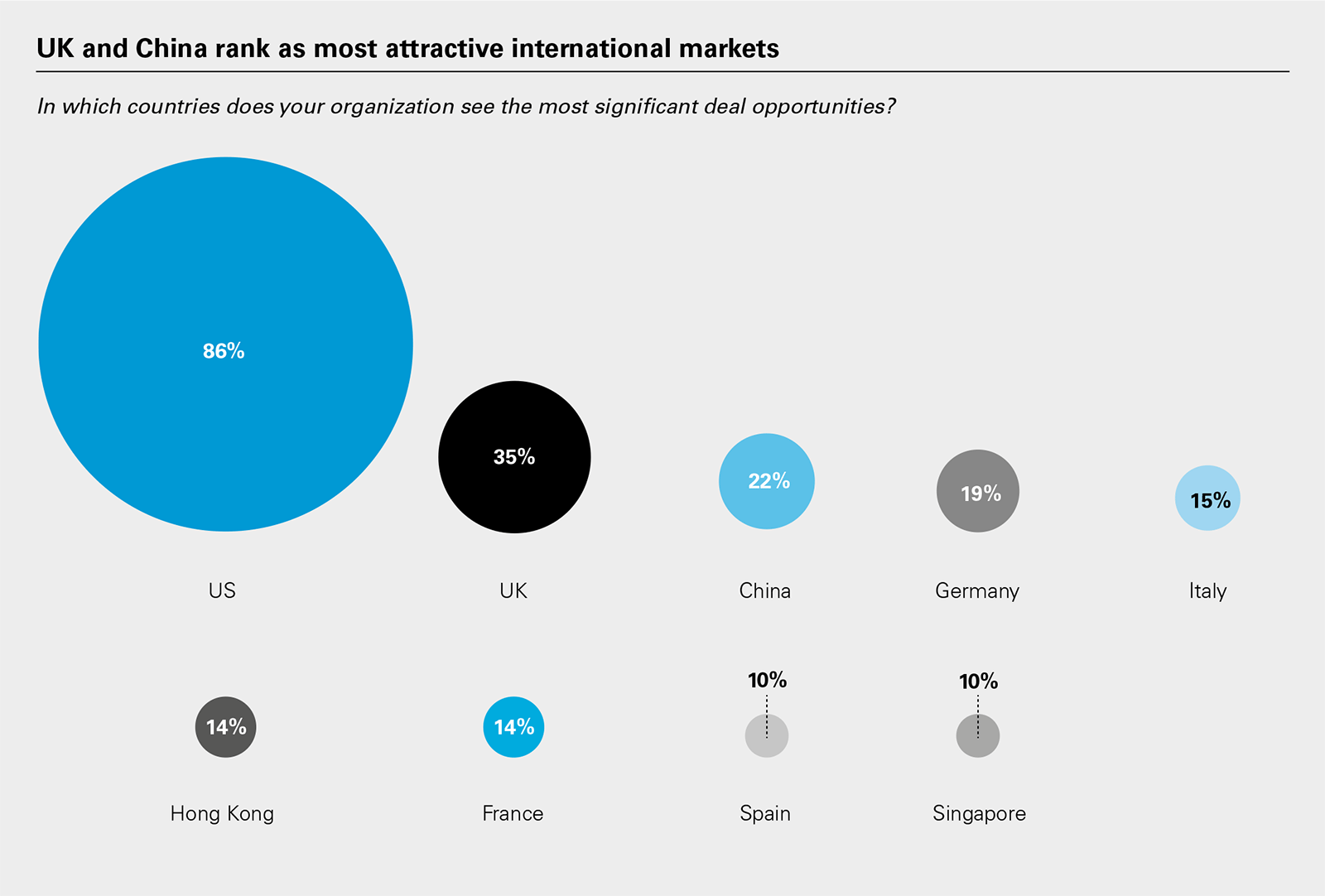 Stocks are overvalued—but executives think another crash is unlikely

By August, the S&P 500 had fully recuperated its losses for the year, after having shed a record 34 percent of its value at the end of the first quarter. Other major indices, including the Dow and Nasdaq, followed a similar trajectory back toward the highs of early 2020.

Perhaps not surprisingly, 60 percent of the executives we surveyed said the stock market was overvalued when we ran our survey in August, with more than a third saying it was overvalued by more than 10 percent.

More than 80 percent of executives in the power and utilities and hospitality and travel sectors said markets are overvalued—as did about 70 percent in the banking and financial services, infrastructure and real estate, and entertainment and media sectors, and 67 percent in the information technology sector.

As noted, many indices were approaching their pre-COVID market values when we conducted our survey in August. Of course, markets fell in September. It is possible that the 42 percent of executives who said they expected high volatility but didn’t expect markets to return to pre-COVID levels are now expecting a correction. Nevertheless, it’s clear from the survey that the vast majority—85 percent—do not expect another major crash. 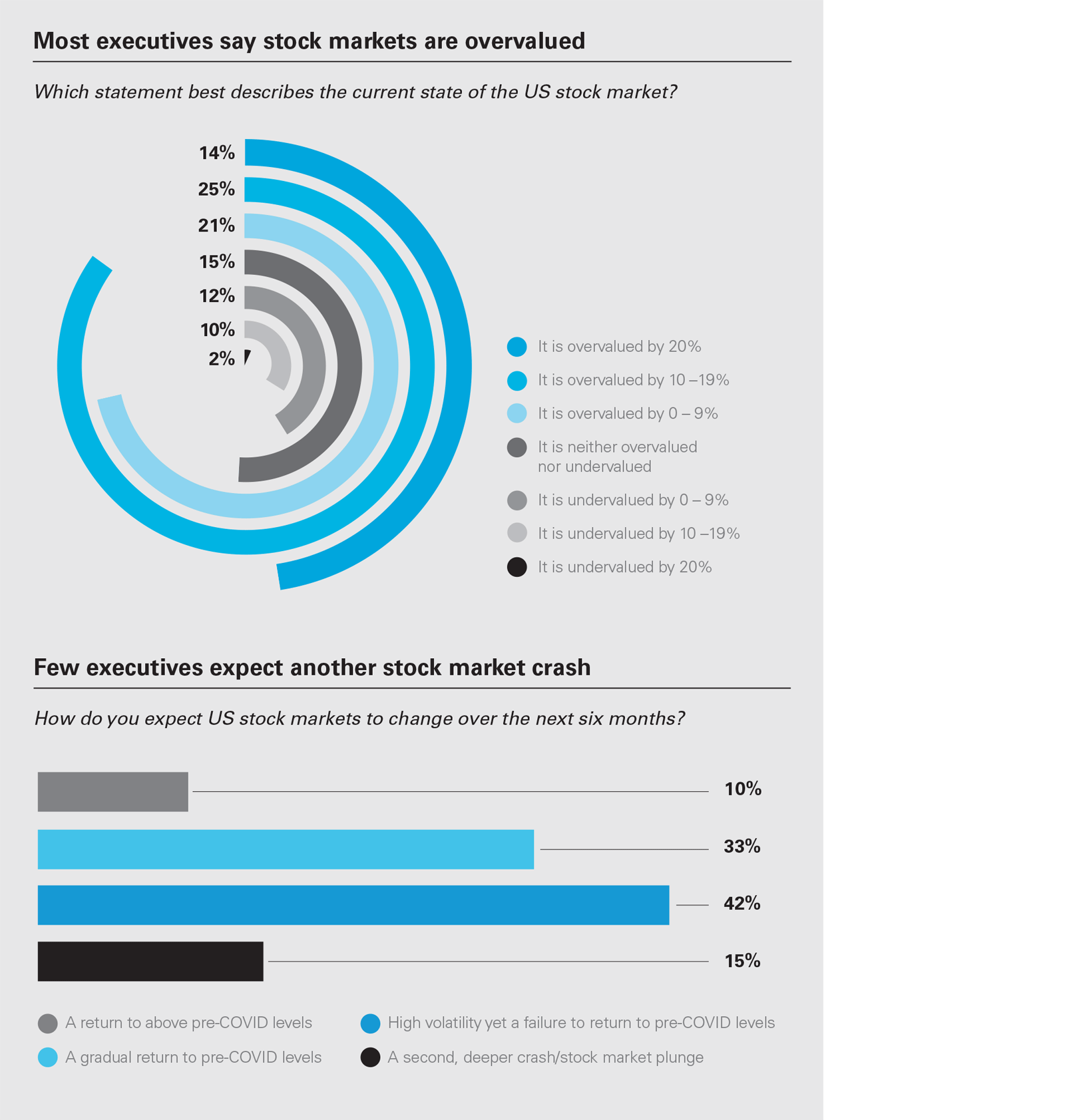 › Download PDF 'US dealmakers expect uptick in M&A, but no swift return to pre-crisis levels'