A combination of SPACs, pent-up demand from pandemic-shocked 2020 and a wave of technology listings drove the IPO market to record highs

New issues came roaring back in 2021—3,021 listings raised US$601.2 billion, valuing the newly floated companies at US$2.7 trillion

The global IPO market made up for lost time in 2021. After a slow 2019 and a pandemic-battered 2020, new issues came roaring back last year—3,021 listings (inc. SPACs) raised US$601.2 billion, valuing the newly floated companies at US$2.7 trillion. Overall, this was a year-on-year increase of 88 percent in volume and 87 percent by value.

A proportion of last year's activity reflected pent-up demand, with new issues that might have taken place in the previous year deferred until 2021. But even without that effect, last year was remarkable, with IPO activity hitting new heights.

One significant driver was the continuing boom in the market for special purpose acquisition companies (SPACs)—particularly evident in the first half of 2021 and the expansion to European markets. Last year's global IPO figures included the launch of no fewer than 681 SPACs, which collectively raised US$172.3 billion. That was a major increase from 2020, itself a record year for blank check companies.

Nevertheless, excluding SPACs, the IPO market still enjoyed a record year, with 2,340 new issues raising US$428.9 billion. By volume, IPO activity rose 73 percent compared to 2020; by value, 2021 was 81 percent ahead.

A boom across regions

Unlike in some previous years, the IPO surge was global, rather than restricted to the largest markets. That said, the biggest listing in 2021, the flotation of Rivian Automotive, came in the US. The California-based company designs, develops and manufactures electric vehicles and accessories for the consumer and commercial markets, and raised US$13.7 billion when it listed on Nasdaq.

The Asia-Pacific region had a bumper year, with six of the top-ten deals taking place in the region. The largest of these saw Hong Kong–based Kuaishou, which derives its income from live streaming and online marketing, list on the Hong Kong Stock Exchange raising US$6.2 billion—the world's second-biggest new issue.

South Korea's Coupang took the third spot in last year's IPO rankings, raising US$4.6 billion. Coupang's IPO in New York reflected investors' appetite for a business that is often compared to Amazon and owns more than 100 fulfillment and logistics centers.

And listings were not limited to the major capital markets. For example, Indonesian e-commerce company Bukalapak listed on the Indonesian Stock Exchange, raising US$1.5 billion. The company listed at a market cap of US$6 billion, making it the country's first listed tech unicorn.

In Europe, meanwhile, the biggest listing was for Poland's InPost, a parcels and collections business that raised US$3.9 billion on Euronext Amsterdam.

In Latin America, the top deals were all in Brazil. Many of these deals were related to technology—and in particular, fintech. The highest-profile of these was the IPO of digital banking group Nu Holdings—South America's largest new issue of the year. Nu raised US$2.7 billion in the IPO.

These deals highlight that technology was a major driver of the IPO surge, encouraged by the societal changes that the pandemic accelerated.

Meanwhile, private equity (PE) was not shy about going public, adding to the 2021 IPO frenzy. The listing of UK PE firm Bridgepoint, which raised US$1.2 billion, and French PE firm Antin Infrastructure, which raised US$742 million, caught the attention of European peers. The spectacular stock market performance of Sweden's EQT AB since its 2019 listing—at its highest in November 2021, up 542 percent—also focused minds. For example, according to Bloomberg, PE firm Ardian was thought to be mulling an IPO of its own in fall of 2021. 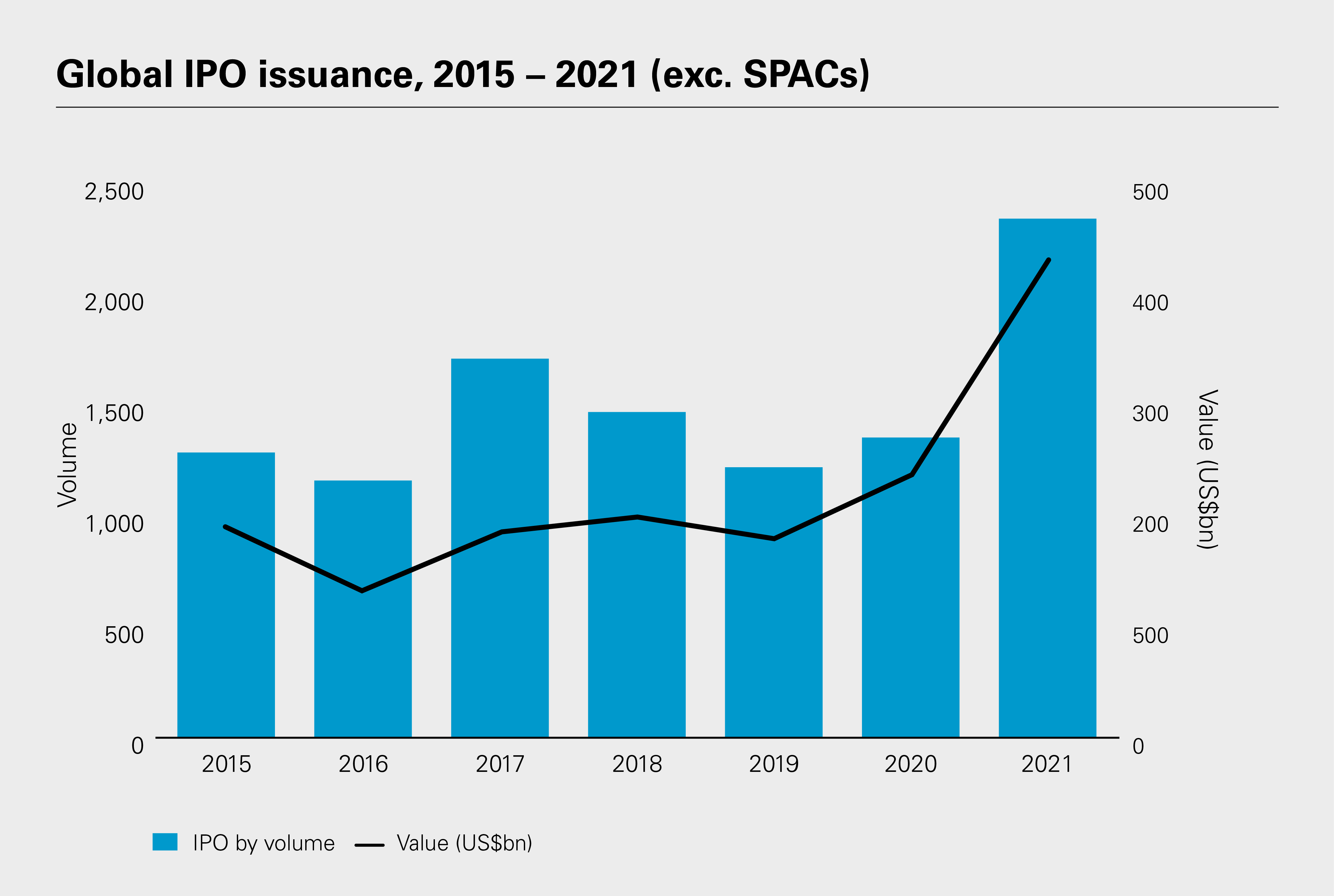 Last year's global IPO figures included the launch of no fewer than 681 SPACs, which collectively raised US$172.3 billion

In the SPACs space, meanwhile, rumors of increased regulation did not deter sponsors—in the first half of the year, at least. Overall, there were 681 SPAC IPOs globally last year, raising US$172.3 billion—both record-breaking figures.

There were seven SPACs that each raised more than US$1 billion in 2021, led by the US$1.7 billion IPO of Soaring Eagle Acquisition Corp. It would subsequently announce a US$15 billion merger with the biotechnology company Gingko Bioworks.

However, in the spring, the market for both SPAC IPOs and M&A deals paused when US Securities and Exchange Commission (SEC) officials released a statement on accounting and reporting considerations for warrants issued by SPACs, challenging SPACs' treatment of their warrants as equity rather than liabilities.

While no market participants considered this a material issue, it nonetheless took several weeks for SPACs to determine whether they needed to revise or restate their previously issued financial statements and make the necessary SEC filings, and for new SPACs to obtain the necessary valuations to treat the warrants as liabilities.

Consequently, Q2 saw only 83 SPAC IPOs raising a total of US$17.9 billion, a nearly 74 percent fall in volume and more than 82 percent decline in value compared with the previous quarter. Things picked up over the second half of the year, but did not come close to Q1's rush of activity.

Still, while US regulators continued to scrutinize the SPAC phenomenon, issuance in other parts of the world began to accelerate. European SPAC IPOs accounted for 6 percent of the global market by volume last year, and Asia-Pacific issuers showed more interest too; South Korea, for example, saw 20 SPAC launches in 2021. In Europe, the market opened up to the US-style SPAC with listings in Amsterdam, Paris and Frankfurt, with four raises for SPACs totaling US$1.1 billion. London changed its rules in August, and the first SPAC to list under the new regime floated in November, raising US$196 million.

At the same time, regulators and exchanges in Asia-Pacific looked to jump on the SPAC bandwagon, with Singapore's SGX launching its new SPAC regime in September 2021, and Hong Kong updating its listing rules to welcome SPAC activity from the start of 2022. 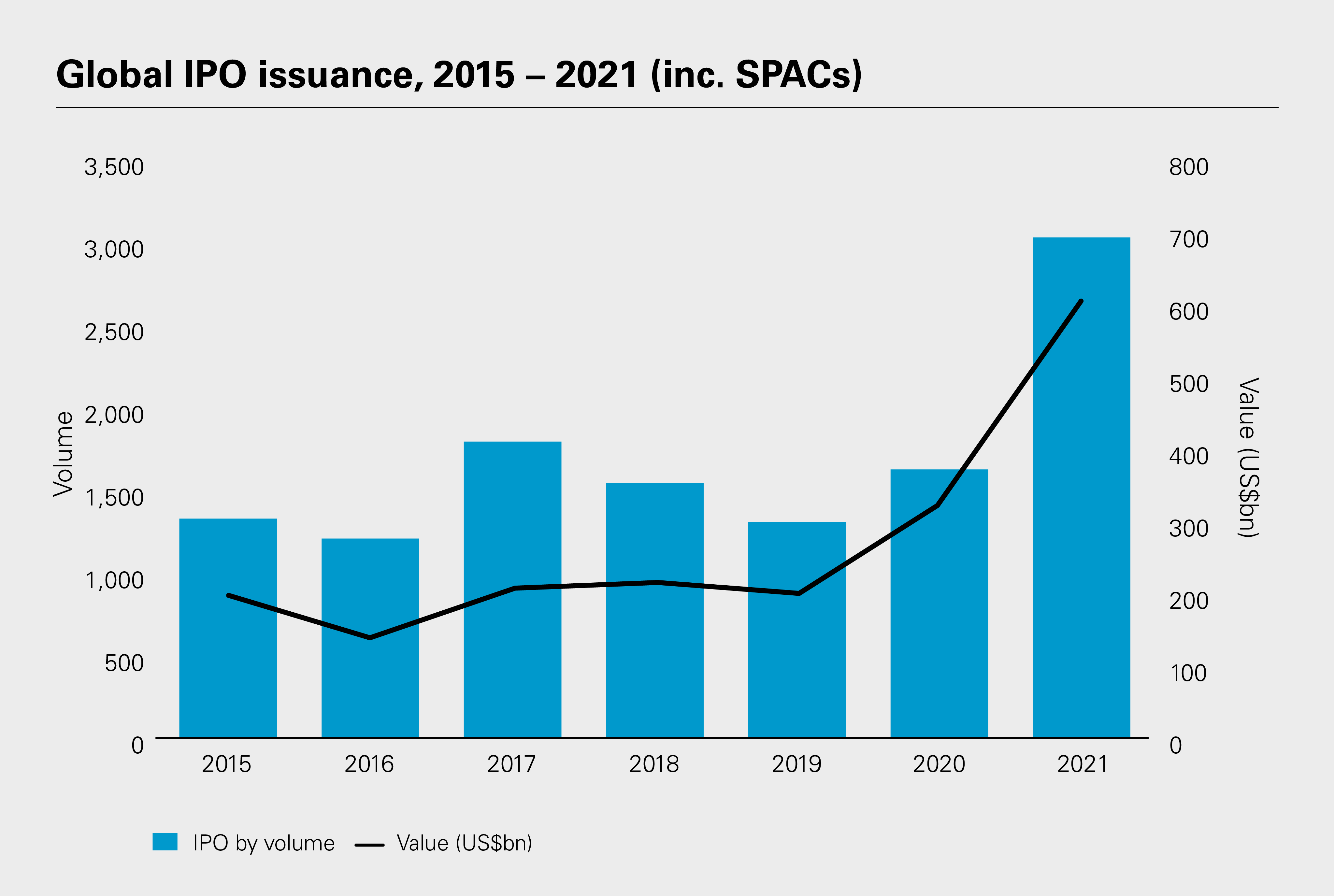 Given the records achieved last year, 2022 was always likely to struggle to match 2021's IPO performance. Heading into the start of the year, global economic factors such as mounting inflation, ongoing issues with Brexit in the UK, the uncertainties of the pandemic and the upcoming Brazilian presidential election, as well as regulatory developments in China restricting China-based companies raising capital through offshore listings were potential headwinds for IPOs. The escalation of the conflict between Russia and Ukraine has put an additional damper on things.

The IPO market, especially in Europe, is expected to remain quiet as it reacts to the conflict—as well as to potential knock-on effects such as soaring energy prices, which could worsen already high rates of inflation.

However, there is also plenty of reason for optimism as the year progresses: With monetary policy still loose by historical standards, capital is plentiful and affordable; further recovery from the pandemic should support businesses in most sectors; and powerful themes in sectors such as technology remain compelling. With these drivers of activity in place, new listings could pick up in the second quarter.

Moreover, dealmakers have gotten used to overcoming some of the pandemic's practical difficulties. Virtual roadshows are now commonplace, due diligence is managed remotely, and continued high stock market valuations give issuers every reason to embrace these tools to get their IPOs underway.

Similarly, among SPAC issuers, while additional regulation by the SEC may be in the offing, and with many post-SPAC companies trading below their IPO price, new IPOs could resume once markets calm down, albeit at a reduced amount. And non-US SPACs continue to become more commonplace.

Though the conflict between Russia and Ukraine—as well as regulatory challenges, political disruptions and the pandemic—may slow the flow, last year's record figures proved that dealmakers have learned how to quickly adjust to unpredictability. Activity levels in 2022 may not match those of 2021, but neither will new listings dry up. 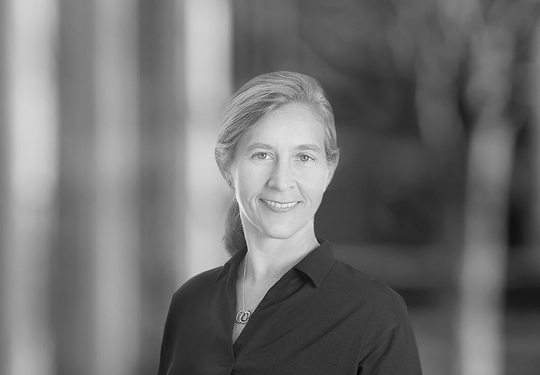 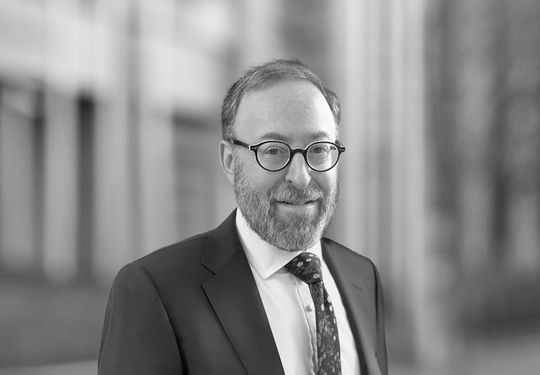