US $26.5 billion
value of deals in 2018 targeting Israeli companies— an increase of 4.5 percent compared to 2017 and an all-time-high total

Deals targeting Israeli companies hit an all-time high of US$26.5 billion in 2018, from 103 deals—an increase of 4.5 percent in terms of value compared to 2017. Much of this increase was due to a jump in domestic dealmaking, which increased 178 percent over 2018 to almost US$8.1 billion as deal flow from foreign buyers fell 18 percent to US$18.4 billion. Additionally, outbound activity also dropped 39 percent to US$2 billion.

These totals include a number of headline-grabbing deals. Inbound M&A was headed by Frutarom Industries' US$7 billion acquisition by US-based chemicals and materials firm International Flavors & Fragrances. The next biggest deal was in the consumer sector, when US giant PepsiCo announced it would pay US$3.2 billion for SodaStream International.

And, according to our survey of 51 senior Israeli executives, the 2019 outlook could be even stronger, with domestic dealmakers increasingly optimistic about the M&A environment, ready to continue acquiring in the face of any global downturn, and challenging foreign investors for prize assets at home while also welcoming new entrants from Asia.

After two exceptionally busy years for M&A activity in Israel, our survey respondents seem unconcerned that the market may pause for breath, and remain upbeat about 2019. Indeed, 25 percent of respondents expect their organization to do significantly more deals over the next 12 months than in 2018—ahead of the 19 percent who predicted a much busier period a year ago. A further 51 percent anticipate doing moderately more deals, while just 2 percent think M&A activity will decline.

There are several explanations for this positive outlook. One is certainly the continuing strength of Israel's technology sector, with startup and scale-up businesses often found at the center of M&A, both domestically and internationally (see "Technology still on top", page 11, for more).

And, even early in 2019, the burgeoning tech market is once again proving irresistible to foreign buyers—eight of the top-ten deals are in the sector. Major transactions include UK private equity firm Novalpina Capital's purchase of cyber intelligence business NSO Group for US$850 million.

Another factor is the growing maturity of Israeli businesses and their determination to diversify. "Entrepreneurs in Israel are seeking out multiple trading routes to support their domestic business," explains the managing partner of one private equity firm. "Bidding on non-Israeli companies means venturing into newer markets and settling into the next phase of operations for the organization."

With startups requiring funding to grow and innovative technology a key driver for global M&A, the best Israeli assets are in ever-higher demand, with survey respondents expecting competition for targets to intensify over the next 12 months. Some 43 percent foresee a significant increase in competition for Israeli assets, well ahead of the 28 percent who expected the same a year ago as well as the 18 percent who held this view in 2017. A further 35 percent expect a moderate rise in competition during 2019.

This competition looks likely to be buoyed by growing interest in Israeli businesses from both domestic acquirers and an influx of Asian suitors who are set to join US companies with a long track record of bidding on the country's assets. And with so many bidders doing battle for the best companies, deal values should rise higher even if volume does not increase. 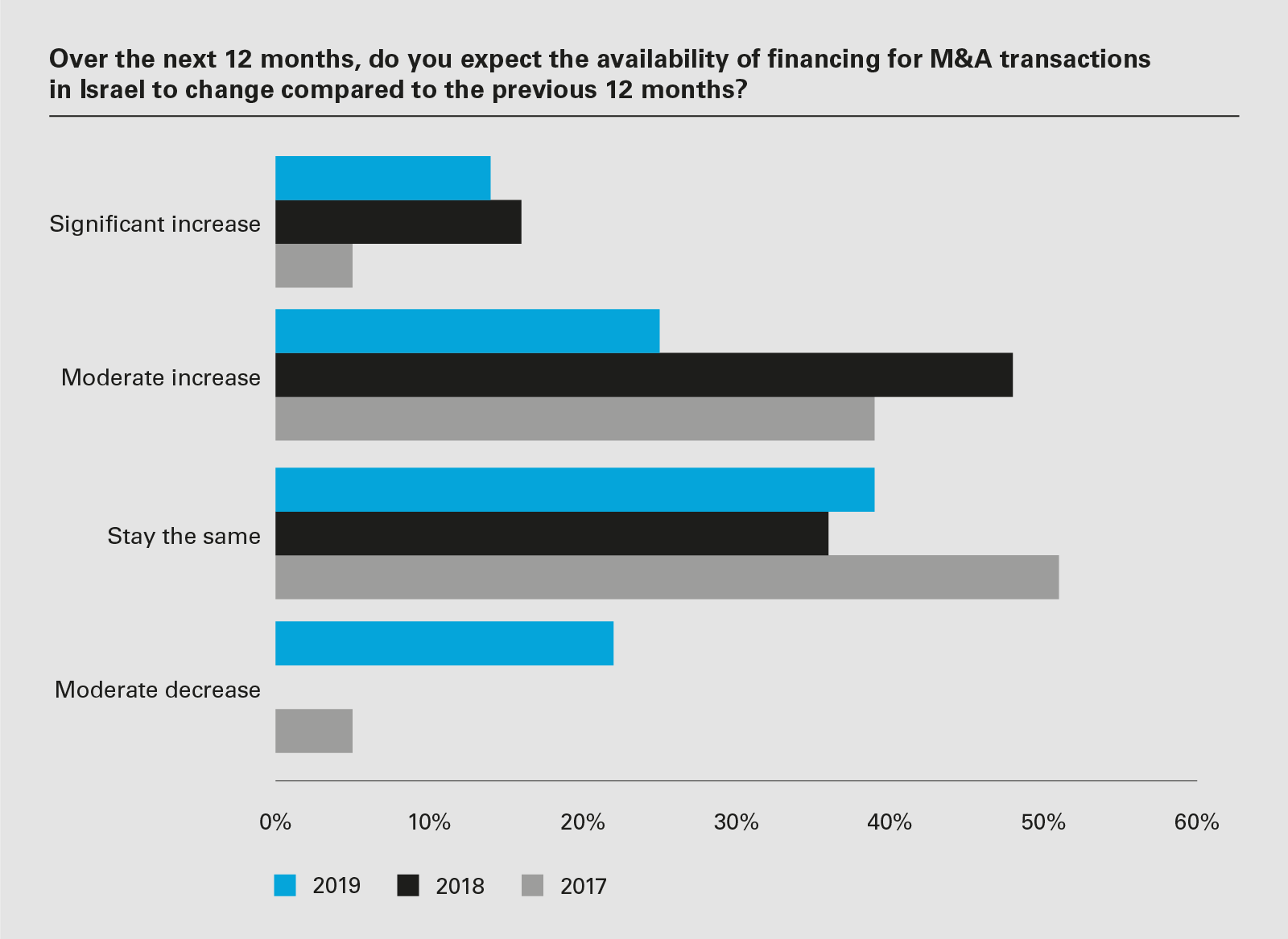 Such competition might seem counterintuitive given the global economic backdrop, with growing trade tensions between the US and China and ongoing uncertainty around Brexit. Moreover, there is no guarantee that the availability of financing will remain at current levels. While 39 percent of survey respondents predict an increase over the next 12 months, the same number predict no change, while 22 percent expect funding levels to decline. Indeed, on funding at least, respondents are markedly less optimistic than in recent years.

Nevertheless, there has been no corresponding drop-off in optimism. Israeli businesses' record of innovation is proving impressive enough to attract increasing numbers of buyers even during a tougher economic period, while also underpinning a rise in the number of domestic companies that are willing and able to engage in M&A.

With Israel now second only to the US on a per capita basis in the launch of innovative technology-based companies, the country's high-tech sectors are a natural target for M&A. In our survey, 90 percent of respondents picked the technology and media industry as likely to be among the top-two most appealing sectors to acquirers of Israeli companies this year. The next most cited sector, life sciences, scored just 29 percent.

That would be a continuation of recent trends. There were 42 M&A deals in the TMT sector between the beginning of 2018 and the end of Q1 2019, more than twice as many as in any other sector. Deal values were higher only in the industrials and chemicals industry, where a single transaction, the US$7 billion purchase of Frutarom, accounted for most of the US$8.3 billion total deal value.

Several technology sub-sectors remain white hot. More than half of survey respondents (51 percent) think cybersecurity firms will be in particular demand with acquirers this year, while mobile technology specialists, cited by 27 percent, are also expected to be widely coveted.

And while Israel's small startup tech businesses are much admired, its more established companies continue to sell too. The US$3.1 billion acquisition of semiconductor specialist Orbotech by US company KLA-Tencor was the third-biggest Israeli M&A deal of 2018. 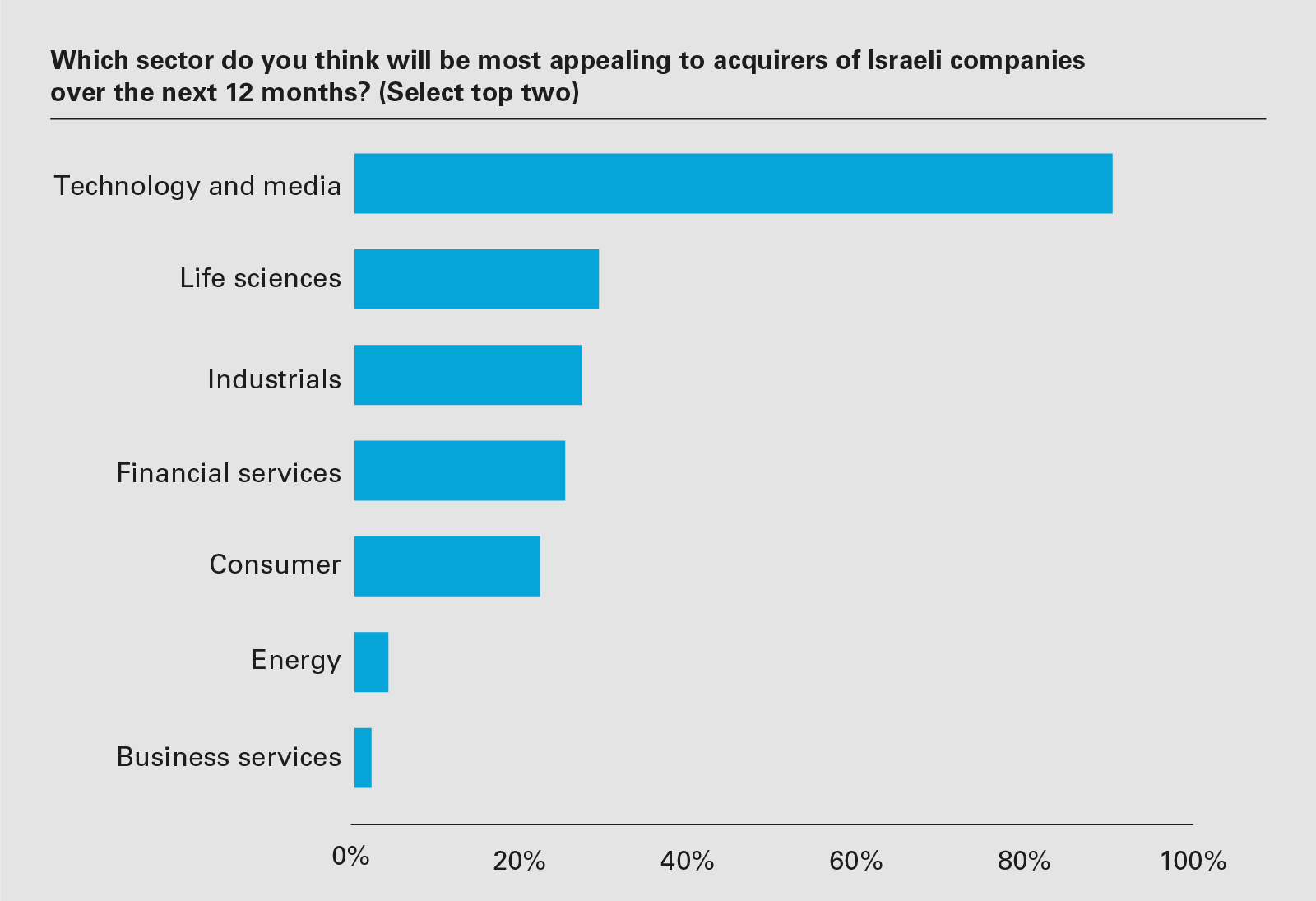 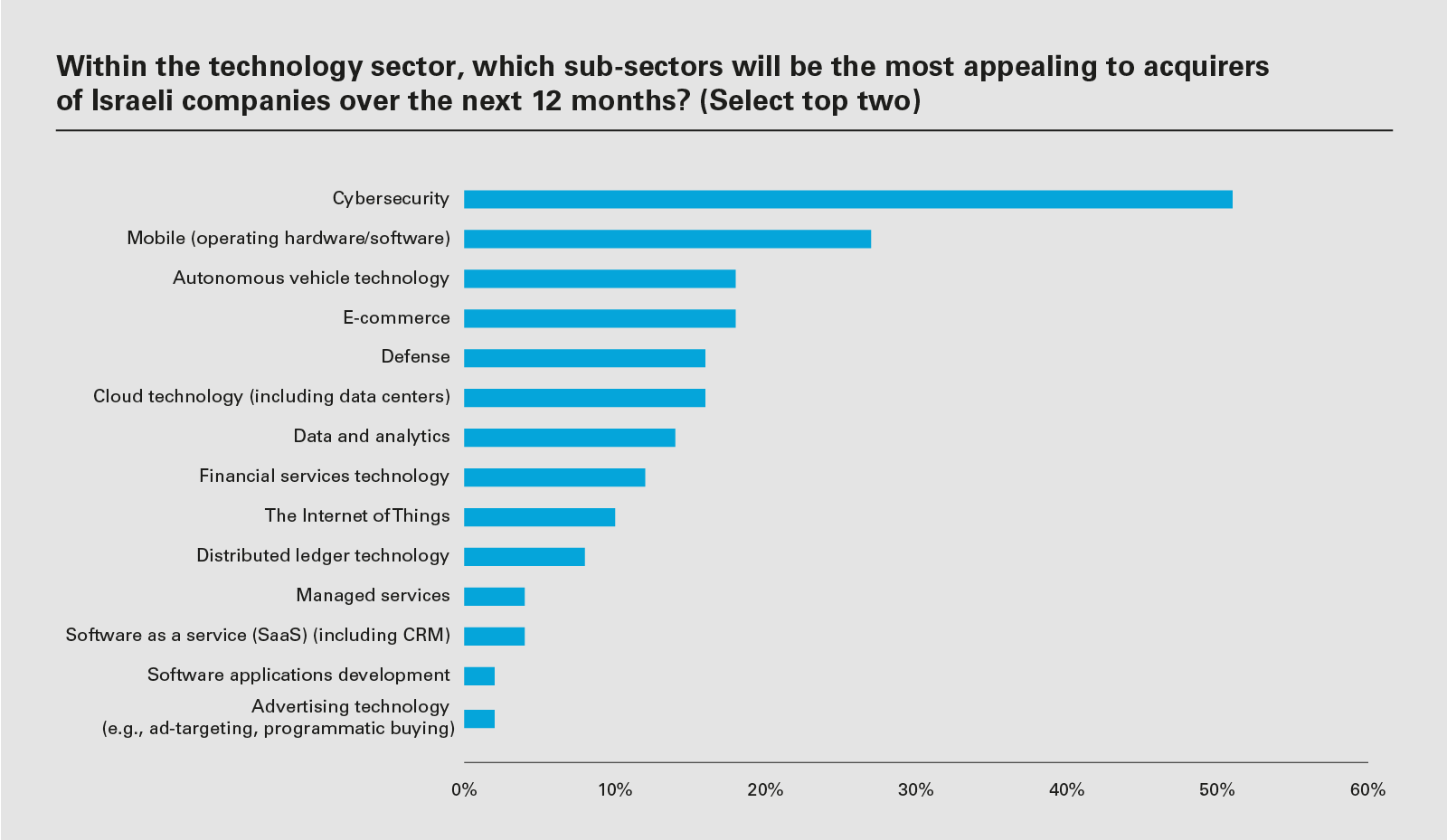