Transitioning to new priorities in a post-pandemic era

Our seventh edition of Africa Focus focuses on the potential for transformative changes within Africa during a time of historic global transition—not just from a COVID-19 to post-COVID-19 world, but against the backdrop of the United Nations Climate Change Conference COP26 in Glasgow, Scotland.

Issues around balancing greenhouse gas emissions against the development and use of natural resources as Africa industrializes and seeks to overcome roadblocks and challenges to growth and climate change-related challenges and vulnerabilities against GDP growth and increasing prosperity will be seen increasingly across sectors, industries and geographies in Africa. These discussions are already defining the way in which governments, investors, lenders, communities and other stakeholders view opportunities and investments in Africa and will do so more directly and more frequently in the coming years.

What does this mean for the world of business? Litigation related to climate change, a now well-established trend in Europe and North America, seems to have reached Africa, too. In "Climate change litigation in Africa: Current status and future developments," we outline signature cases and examine climate-related matters that might trigger challenges and disputes across Africa.

Equally, we all recognize that there are increasing investment opportunities when it comes to renewable energy. Seven of the ten sunniest countries in the world are in Africa, and wind power is no longer a novel feature in the increasingly sophisticated energy landscape in Africa. In "Renewable energy in Africa: Update in the era of climate change," we explore the significant opportunities for wind, geothermal and hydropower, too.

US foreign policy toward Africa has undergone significant shifts under the Biden administration. In "US government agencies focus on Africa," on the continent and their focus and how that ties in with both energy transition and renewable energy. In "Debt: Outlook for Africa brightens after challenging first half to the year," we discuss recent successful loan and bond issuances by African borrowers, investor resilience and lender interest in high-quality credits throughout the region.

Africa is experiencing a boom in M&A. In "M&A transaction terms: Comparing Africa to Europe," we contrast terms that typically apply to African M&A transactions, with those in Europe. And "African M&A stages a comeback" explores how African transactions appear to be highlighting a renewed sense of confidence among dealmakers. Acquisition and divestment strategies in Africa have become highly sophisticated. As a case study, "Acquisition financing in an era of energy transition" describes the January 2021 sale of a 45 percent stake in Nigerian Oil Mining Lease 17 (OML 17) and related infrastructure assets, using an innovative, first-of-its-kind hybrid financing structure.

Finally, "Southern Africa's PGMs are on the rise" explains how platinum group metals (PGMs) are increasing in southern Africa mining, on the back of demand for net-zero and the green economy.

“Our seventh edition of Africa Focus focuses on the potential for transformative changes within Africa during a time of historic global transition.”

Climate change litigation is increasing steadily worldwide, although few cases have been filed yet in Africa.

Renewable energy in Africa: Update in the era of climate change

Significant differences exist between terms that typically apply in M&A transactions in Africa and Europe.

H1 2021 dealmaking within the continent appears to be turning a corner.

US government agencies focus on Africa

Africa is a priority for several Biden administration agencies working in development finance.

Debt: Outlook for Africa brightens after challenging first half to the year

Acquisition financing in an era of energy transition

Southern Africa's PGMs are on the rise

Last year was a challenging one for M&A in Africa, with both deal value and volume dropping to their lowest figures on record. Yet 2021 has shown signs of a resurgence, with H1s total of 87 deals marking a 15% increase compared to H1 2020.

Deal value shot up to US$56.7 billion in the first half of the year, largely thanks to the US$46.1 billion share swap agreement between South African multinational Naspers and its Dutch-listed investment unit Prosus. The deal pushed African deal value to its highest H1 total on record.

Even without the Naspers deal, H1 2021 deal value would stand ahead of 2020's record low annual total of US$9.7 billion—highlighting a renewed sense of confidence among dealmakers.

South Africa continued to be the most active country for dealmaking, in terms of both value and volume. A total of 41 deals in South Africa worth US$46.56 billion were announced during the first half of the year—already higher than any annual value total on Mergermarket record (since 2006).

The deal between Naspers and its Dutch-listed investment unit was structured via a share swap agreement, in a move aimed to reduce the impact of its 29% holding in Chinese internet giant Tencent on local financial markets.

While the Naspers deal stood far above the rest of the pack in terms of value, deal volume also saw an uptick year-on-year, reflecting a strong foundation of activity in the South African deal market. A total of 41 deals were announced during H1 2021—an increase of six deals year on year.

Telecommunications, media and technology (TMT) was the most active sector for South African dealmaking, with a total of 10 deals recorded—almost overtaking the 11 deals announced throughout the whole of 2020. South African TMT deal activity had been on the rise before COVID-19 hit, reaching a peak of 24 deals in 2019. H1's activity is a promising sign of the beginning of a potential dealmaking resurgence.

The highest-valued South African TMT deal in H1 was Volaris Groups US$88 million acquisition of software and IT firm Adapt IT. The Canadian software group was forced to increase its offer following competition from rival suitor Huge Group, a South African telecommunications firm. 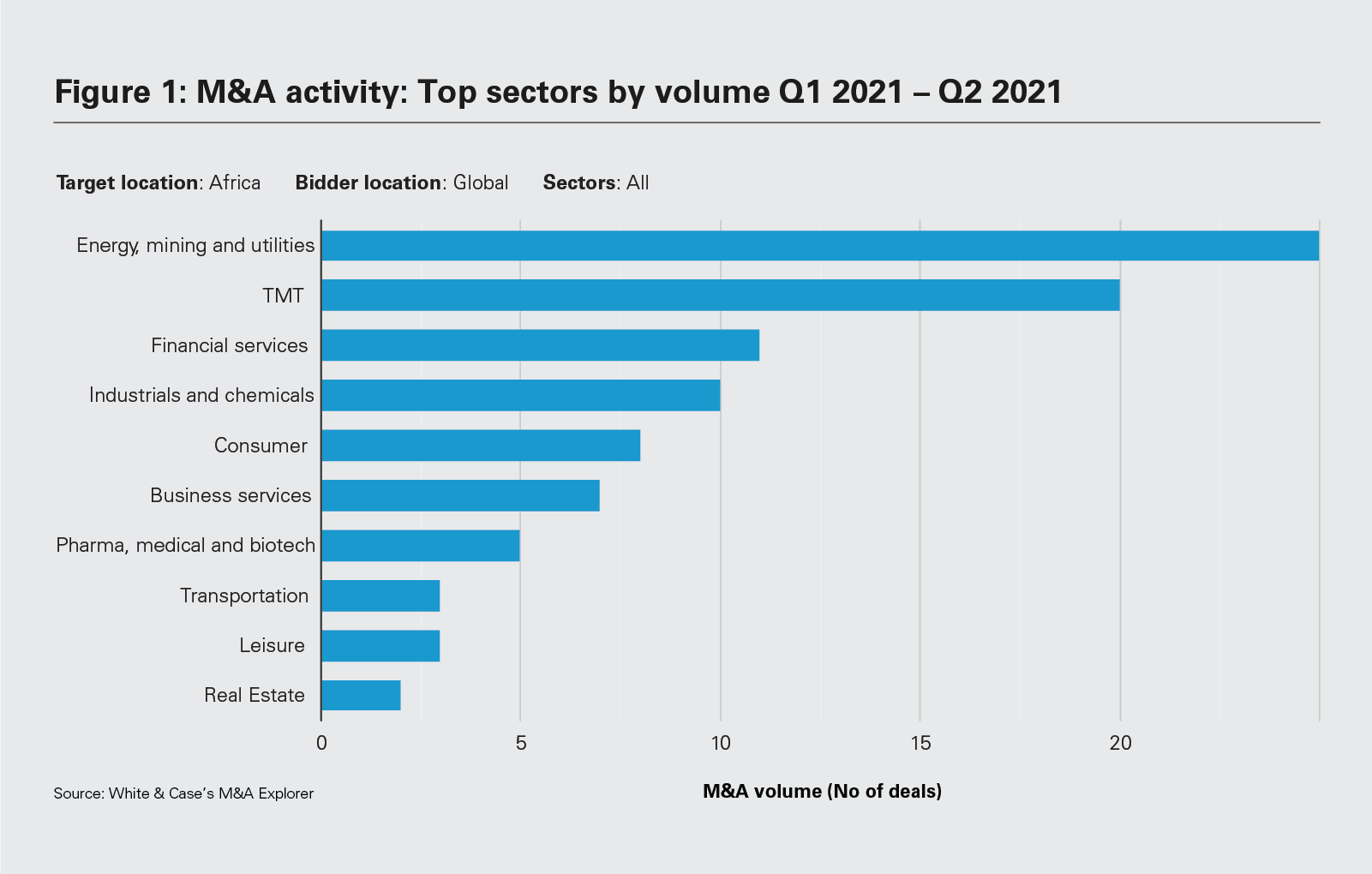 Energy, mining and utilities (EMU) dealmaking displayed an impressive rebound in the first half of the year. The sector generated the highest number of deals in Africa across all sectors, with a total of 24 announced deals—up by 14 year on year. A total deal value of US$5.8 billion, meanwhile, has already overtaken 2020's annual figure of US$2.6 billion.

Performance was boosted by some big-ticket domestic tie-ups, including Zambia Consolidated Copper Mine (ZCCM)s acquisition of a 90% stake in the Mopani copper mines owned by Swiss mining giant Glencore. Global demand for copper is rising, with the metal trading at over US$8,000 per ton, according to reports. Demand is being driven by decarbonization—the boom in electric vehicles (EVs) has boosted the need for copper as the metal is used widely in EV production.

Another EMU deal to make the top five of the year was Eni, Shell and Total E&Ps US$800 million sale of a 45% stake in oil mining lease (OML) 17 to Nigerian investment company Heirs Holding and its affiliate Transnational Corp.

Inbound interest in African assets dropped to a record low in 2020 as the COVID-19 pandemic put deals on hold across the globe. There are signs that international confidence in African deals is on the rise. A total of 46 cross-border deals took place in H1—an increase of 12% year on year.

While the Prosus/Naspers deal ensured that the Netherlands was on top in terms of deal value, the UK topped the volume table chart, having been involved in seven deals valued at US$1.24 billion during the first half of the year.

The largest of these deals was Cairn Energy Plc and Cheiron Petroleum Corporations purchase of Shells Egypt-based upstream oil and gas assets, valued at US$646 million.

Dealmaking within the continent was undeniably hit hard by the global pandemic. Many dealmakers who would have previously viewed Africa as a growth opportunity were suddenly forced to grapple with extreme logistical challenges and unprecedented economic uncertainty.

Now dealmaking within the continent is on the rise, with international interest in Africa's energy and mining assets a promising sign of things to come. Domestic tie-ups are also a sign of growing confidence, as local firms look to take advantage of high-growth assets.