The European leveraged finance market remains resilient after a year of unprecedented hardship, as lenders dissect credits to determine the best possible deals, from pricing to documentary terms

As we enter 2021, COVID-19 continues to weigh on every decision, from our health to our work and our long-term plans and yet, despite these concerns, European leveraged finance markets have weathered the storm and remain positive about the year ahead

In March 2020, as lockdown restrictions took hold, the European leveraged finance markets ground more or less to a halt. Many feared the worst, as leveraged loan issuance dropped significantly that month and high yield bonds saw virtually no activity at all. Borrowers and lenders alike held their breath, shoring up their finances and waiting to see what might come next. And then, just as quickly, investor sentiment began to improve. By the end of Q2 2020, leveraged loan activity had returned almost to pre-pandemic levels.

And while it slowed somewhat in the latter half of the year, as new waves of COVID-19 swept across the UK and Europe, the final tally was up 11% on the year before—a remarkable achievement, confirming the market’s long-term resilience.

The story in high yield bond markets was equally impressive, ending the year up 10% on 2019 figures, with every indication that it will retain a larger share of the market in the months ahead.

First and foremost, the influence of COVID-19 will continue to be felt, even as vaccines are rolled out across Europe. Sectors hammered by the first wave—including entertainment and leisure, hospitality, retail, oil & gas and aviation—will struggle to secure financing, having already done what they can to survive. Within those sectors, those that require financing and are able to secure deals are likely to have to pay for the privilege, with leveraged debt either becoming more costly for those whose credit has taken a hit or only being made available on tighter terms.

Second, and in contrast, lenders will turn their attention to high-quality credits or sectors that have found new avenues for growth during COVID-19, such as technology and healthcare.

Third, loan supply will continue to open up—but primarily for those that meet the right criteria. For those well-positioned companies, this flight to quality will continue to offer favourable terms and pricing, and the light-touch covenant packages that were the norm pre-pandemic should remain in place.

At the same time, an anticipated recovery in mergers and acquisitions and leveraged buyout activity will provide an additional lift in the early months of 2021.

And finally, the issues that were front of mind pre-pandemic will continue to influence borrowing and lending decisions, especially environmental, social and governance (ESG) factors—investors will take a positive view of any credits that incorporate ESG criteria in a meaningful way. This will no doubt drive this trend in the months ahead as recovery takes hold and global debt markets return to growth.

Living dangerously: How has European leveraged finance fared in the pandemic? 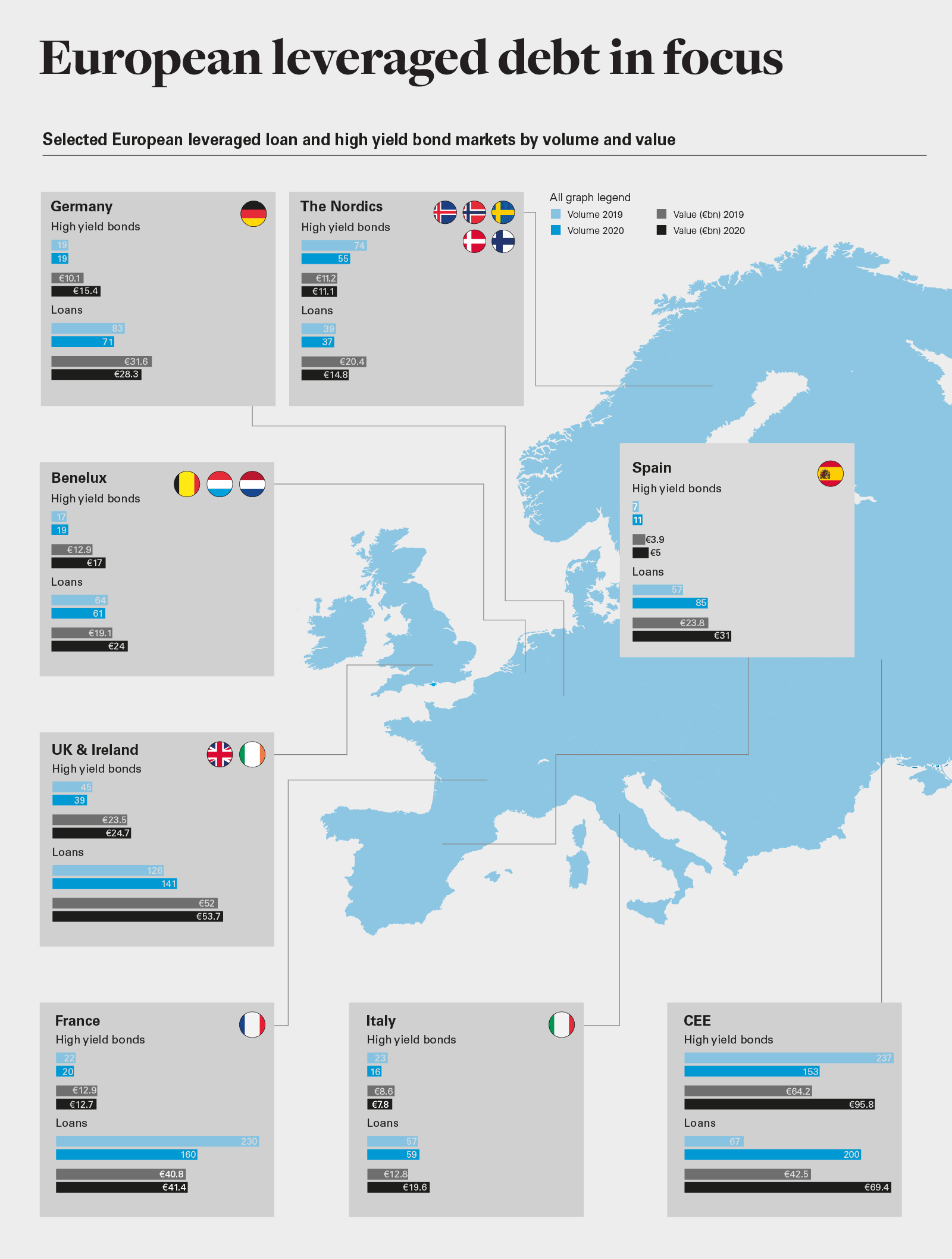 What is shaping sponsor debt decisions for 2021?

After years of warnings about maturity walls, impending cliff edges, downturns
and interest rate hikes that failed to emerge, COVID-19 was the event that brought
everything to a temporary standstill—but there's every chance that the markets will
explode with activity in the months ahead

Download a PDF of European leveraged finance: COVID-19 and the flight to quality

The first half of 2020 was challenging for finance issuance around LBOs in Europe, but a rebound in activity late in the year offers encouragement for lenders and borrowers in 2021.

Private equity deal value in Europe reached its nadir in Q2 2020, totalling €26.5 billion—the lowest quarterly figure since Q3 2013, according to Mergermarket. Private equity deal volumes for the year, meanwhile, declined by around 10% year-on-year.

This hiatus in private equity deal activity following COVID-19 lockdowns weighed heavily on LBO debt issuance. Even though high yield bond issuance for LBOs has been strong—up 39% year-on-year to €7.8 billion—the much larger European leveraged loan market saw LBO issuance decline by 6% to €36.8 billion over the same period, according to Debtwire Par. Financial sponsor deal activity, however, bounced back at the end of the year, pointing to improved deal flow going into 2021. 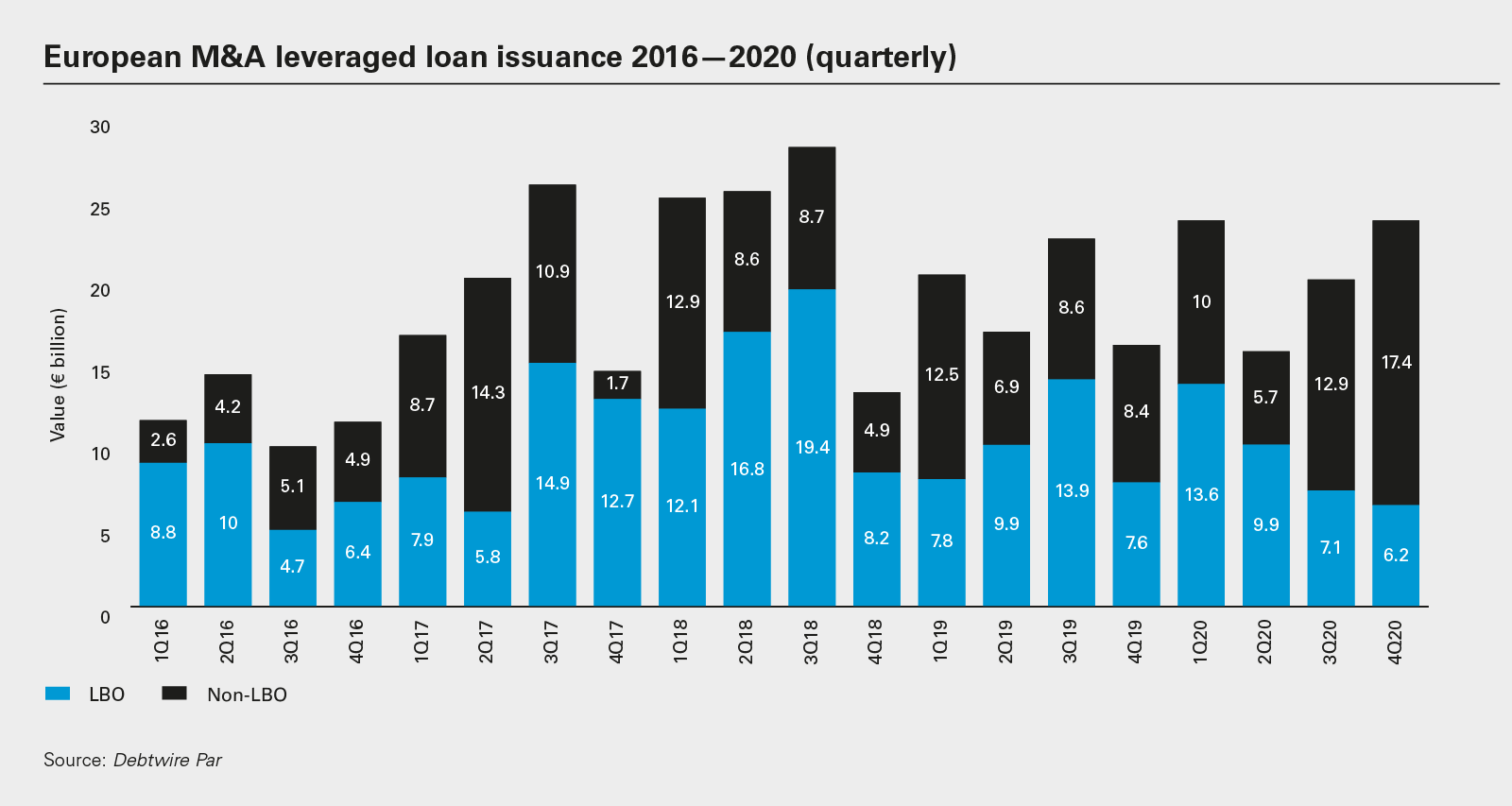 For all the uncertainty imposed by COVID-19, the combination of low interest rates and extensive quantitative easing means that lenders remain eager to deploy capital. This was true throughout 2020—when there was limited deal flow and LBO deals came to market, appetite was robust.

Banks underwriting the debt for the €17.2 billion carve-out of ThyssenKrupp's elevator division by Advent and Cinven, for example, were able to sell €8 billion of loans and bonds to finance the deal, despite pandemic uncertainty. The banks behind TDR Capital-backed pub chain Stonegate, meanwhile, sold down £1.2 billion of bonds in July to finance Stonegate's takeover of the UK's largest pubs operator, Ei Group.

The signs for overall M&A deal activity going into 2021 are positive, with a clearer view of future earnings and pricing, which should give lenders more transactions to finance.

Pricing recovered later in the year but, by Q3 2020, deals trading at multiples of 20x EBITDA had all but disappeared from the market.5

Dealmakers are also replete with capital. Bain & Co figures put the amount of dry powder available to private equity firms, globally, at US$2.5 trillion, of which US$800 billion is targeting buyouts.

On top of this equity war chest, financial sponsors have also benefitted from cash-rich private debt lenders who are eager to lend.

For example, in July 2020, Ares Management arranged the largest ever unitranche loan when it made a £1.875 billion financing commitment to UK insurance brokerage Ardonagh Group. Preqin data, meanwhile, shows private debt assets under management sitting at a record US$823 billion, of which US$279.4 billion still needs to be deployed.6

Add in pent-up demand from CLO and high yield investors, and it looks as though fierce competition among lenders will support strong M&A leverage going into 2021. 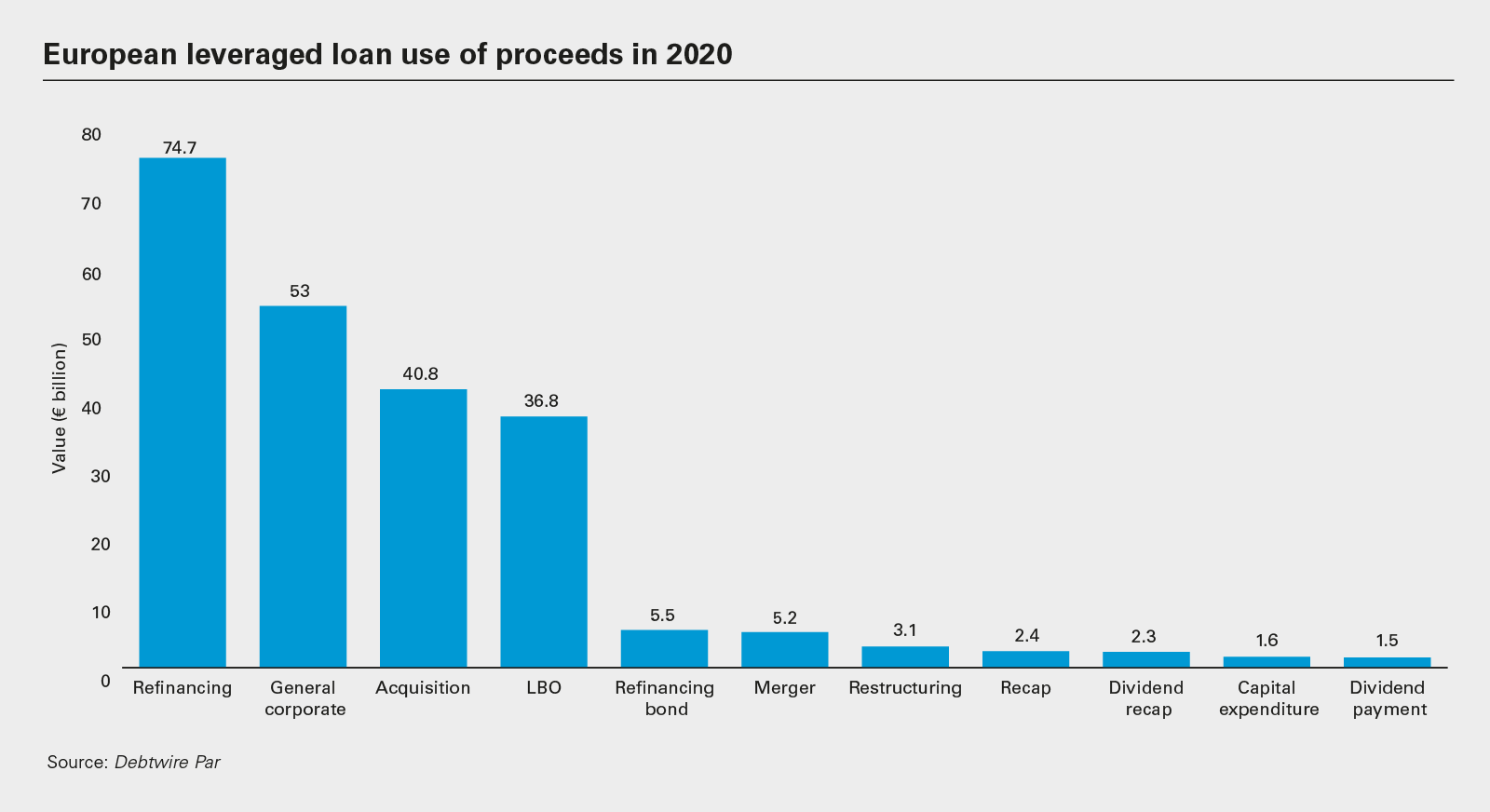 Transaction activity will also be bolstered by a broader pool of dealmakers and investment strategies: Financial sponsors are clubbing together with other funds and investors to open up new sources of deal activity.

Cinven and Advent, for example, joined the RAG Foundation to pursue the ThyssenKrupp deal, while Bain Capital partnered with Finland’s Ahlstrom and Ehrnrooth families to take private Finland-based fibre solutions provider Ahlstrom-Munksjö in a €2.1 billion transaction, according to Unquote data.

Further public-to-private deals are expected to remain a feature of dealmaking, with appetite for take-privates holding up well into the second half of 2020, as observed with KKR, Providence and Cinven securing the US$3 billion delisting of Spanish telecoms group MasMovil in the early autumn.

Activist investors may also continue to spur deal activity—in 2020, Activistmonitor recorded 52 new live activist campaigns in Europe (meaning that the activist had both disclosed a stake and made at least one demand), up from the 50 campaigns recorded in 2019.

The influence of Special Purpose Acquisition Companies (SPACs) in the US on European deal activity should also not be underestimated. Around 248 US SPACs—shell companies that list and then seek acquisition targets—have come to market in 2020, raising US$82 billion, according to Dealogic. These vehicles have two years to invest the capital. Managers are incentivised to transact with a 'promote' that grants the SPAC sponsor a 20% share of the vehicle's equity.

Even though the domestic SPAC market in Europe has been subdued when compared to the activity in the US, SPACs are likely to come shopping in Europe for deals to deploy their large cash piles.

With such a broad range of investors scoping out transactions, valuations should widen, which will help to see more deals over the line. 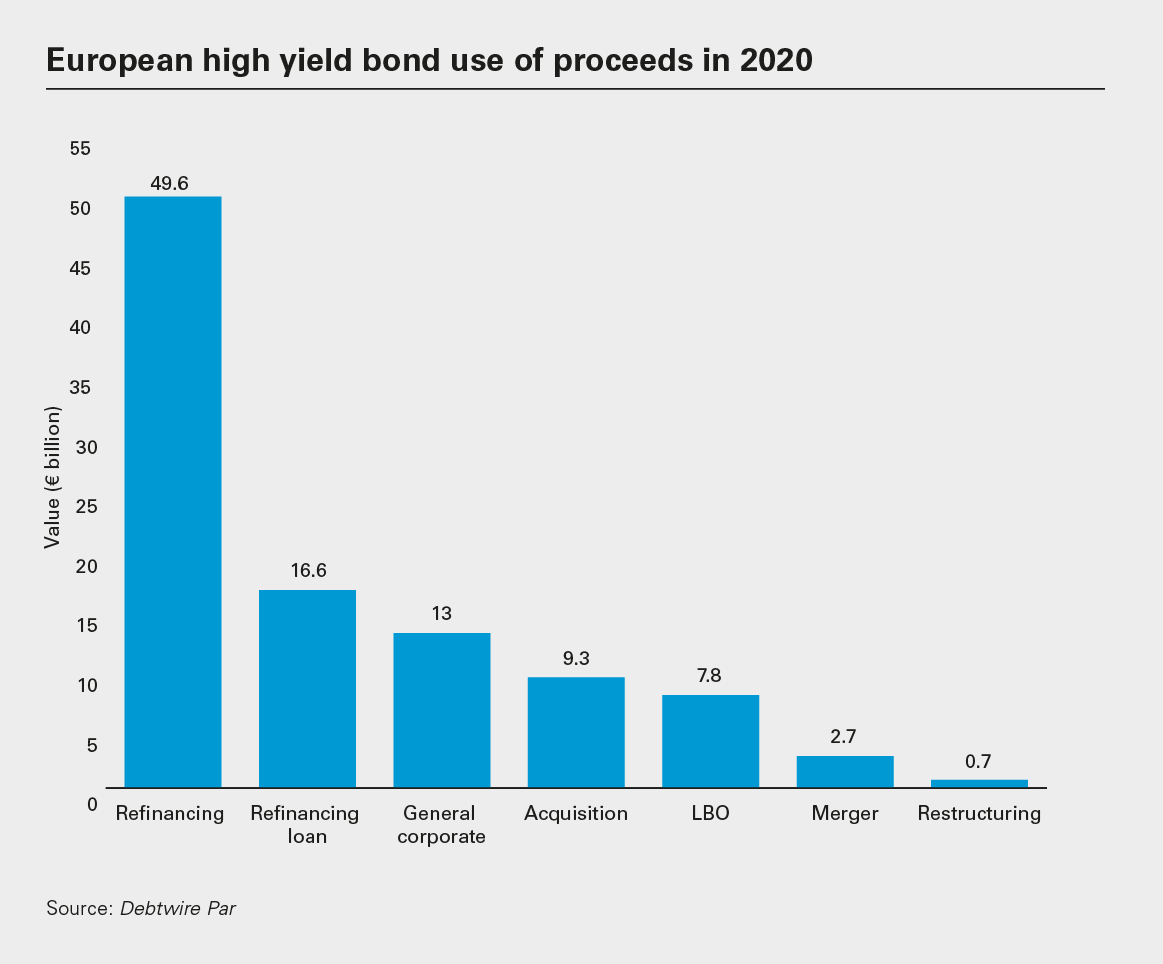 European deal activity is poised to take off in 2021, but financial sponsor-buyers and lenders may remain highly selective—they will likely coalesce around high-quality assets and distressed companies, where investors can buy into sectors directly impacted by lockdowns at low valuations.

Lenders appear to be positioning themselves along these lines. According to Preqin, for example, special situations fundraising this year climbed just under sevenfold from March to April, while distressed debt fundraising in May and June was close to quadruple the levels seen in March and April.7

Click here to read the full magazine
European leveraged finance: COVID-19 and the flight to quality