Those companies that have repositioned themselves as part of the energy transition away from fossil fuels have been able to take advantage of this momentum and find favor among generalist investors in the US.

But the sector is also facing intense scrutiny over its ability to meet increasing environmental, social and governance (ESG) standards. It is far from alone in facing this scrutiny, with other sectors such as energy also under the public eye in relation to ESG issues. The UN Climate Change Conference set to take place in Glasgow in November 2021 will shine an even greater light on these issues.

It is clear that the mining & metals industry must play an important role in energy transition, both in terms of improving its own environmental footprint, but also in being a necessary contributor to the commodities needed to usher in a clean energy future.

The mining & metals industry is not homogenous. It consists of several subsectors, each with their own economic drivers.

Precious metals, industrial metals, construction materials and energy materials each follow diverging commodities cycles. While all miners must focus on ESG compliance, some commodity producers will benefit more than others as the economy turns its attention to an energy transition.

The interest in clean energy and decarbonization of the economy presents an opportunity for those operators producing commodities that are integral to the energy transition. Battery minerals such as lithium, nickel, cobalt and graphite are expected to see a marked increase in demand that many forecast will outstrip current supply.

The shift to the US

Traditionally, mining companies have commonly found their home on one of three exchanges, in markets that have mining as a core component of the national economy: the Toronto Stock Exchange (TSX) and TSX Venture Exchange in Canada; the Australian Stock Exchange (ASX); and the Johannesburg Stock Exchange (JSE) in South Africa.

To an extent, the London Stock Exchange (LSE) has been the international market of choice outside of these three jurisdictions.

According to a comparison of overall domestic market capitalization from January 2020 and January 2021, the TSX and similar Canadian exchanges run by the TMX Group experienced an increase of 4.9 percent. The ASX saw more modest growth of 1.9 percent and the LSE Group had a decrease in capitalization of 8.8 percent.

However, the Nasdaq has increased by 45.5 percent during that time. Traditionally technology focused, the Nasdaq has seen some of the highest growth and influx of capital of stock markets in developed countries in recent years.

There is a great opportunity for miners with the right credentials to capitalize on this moment. Companies producing commodities that are integral to an energy transition and which can demonstrate ESG compliance are finding favor with US investors, and mining & metals companies are starting to gravitate to the US markets as a result, as the graph shows.

The data does not include the second half of 2021, and the first half of 2020 was affected by the pandemic. That just emphasizes the scale of the growth in new listings by mining & metals companies in the past two years. 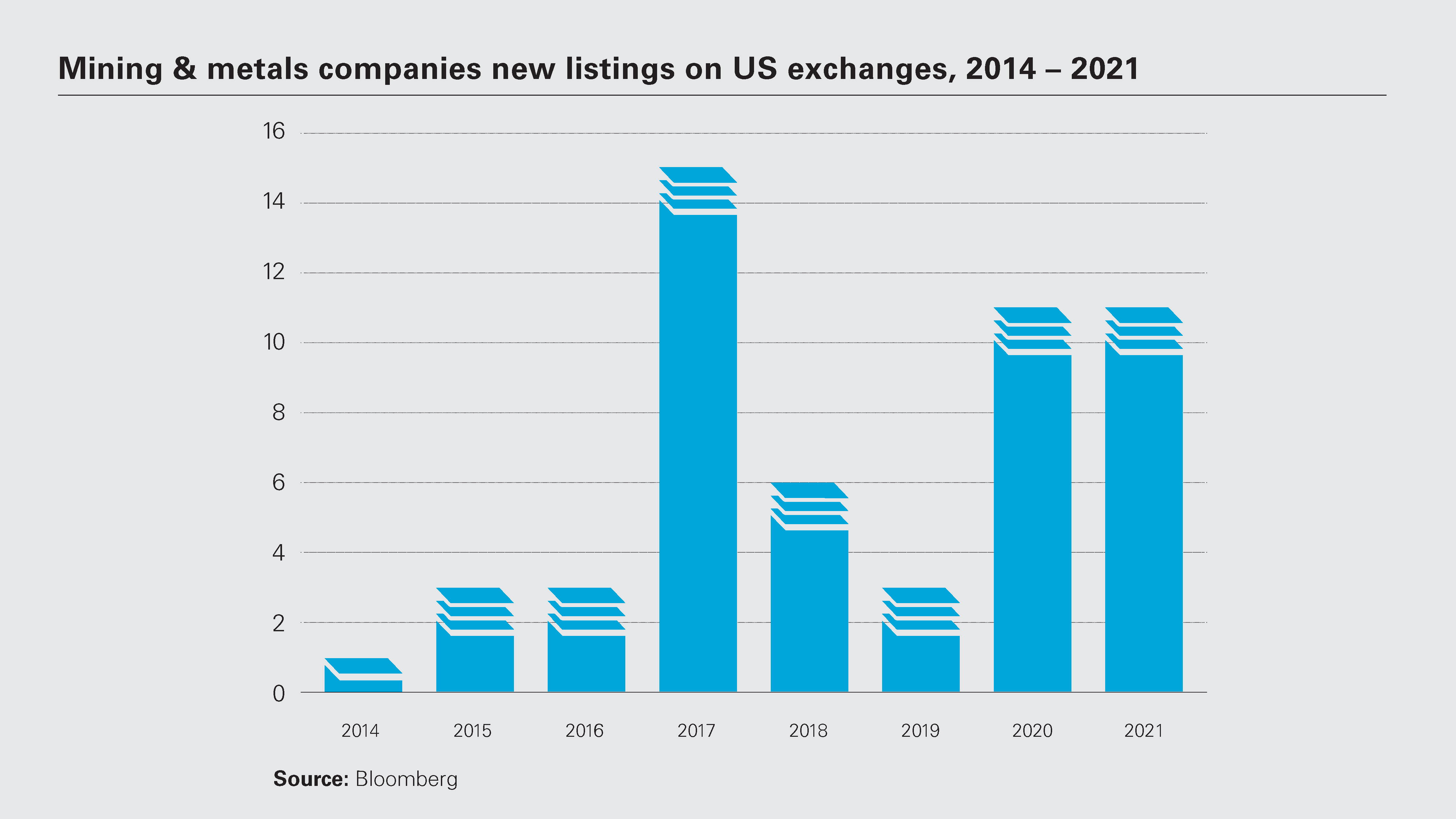 Mining-focused companies are taking advantage of the strength and depth of the US capital markets and the large amount of capital that companies listed on US exchanges have access to. A significant number of these companies have positioned themselves as suppliers to industries that are seen as pivotal to an energy transition, such as electric vehicle manufacturers, battery producers and the renewables sector.

Recent changes to Securities and Exchange Commission (SEC) disclosure rules for companies engaged in mining operations have also helped to facilitate these moves.

In late 2018, the SEC overhauled the relevant disclosure requirements by replacing its decades-old guidelines, set out in Industry Guide 7, with new subpart 1300 of Regulation S-K, based on the Committee for Mineral Reserves International Reporting Standards (CRIRSCO).

The new rules are mandatory for companies for their first fiscal year beginning on or after January 1, 2021. While the rules create a path to disclosure of resources and reserves for companies listing in the US, differences between the SEC rules and those in other jurisdictions based on CRIRSCO mean companies that have historically reported in jurisdictions such as Australia or South Africa will likely have to undertake a substantive update of their technical reports.

An exception to this exists in the form of the Canada-US Multijurisdictional Disclosure System (MJDS). The MJDS gives companies that are already listed and reporting on the TSX (or TSX-V) a more streamlined path to listing in the US.

Battery minerals companies have been leading the way, making the shift to the US. Canada’s Nouveau Monde Graphite, which has traditionally traded on the TSX Venture Exchange, has recently dual-listed on the New York Stock Exchange (NYSE) and Australian Piedmont Lithium, which has raised multiple rounds of capital through the use of American Deposit Receipts (ADRs) on the Nasdaq Capital Market, are two good examples.

In addition to traditional mining companies, special purpose acquisition companies (SPACs) with a mining focus have also been able to generate capital from the US capital markets to an unprecedented degree. To date, SPACs with a mining or energy transition focus have generated, or are expected to generate, nearly US$12 billion from 50 separate initial public offerings.

Newcomers to the essential mining industry are now taking advantage of different avenues to capital that until now were untapped.

The US capital markets are the largest source of capital in the world for publicly traded companies, and mining & metals companies are in the perfect position to take advantage of these sources of capital, as long as they shape their messaging around ESG and what investors are looking for.