Mining & Metals 2022: Putting the resilience rhetoric to the test

Mining & Metals 2022: Putting the resilience rhetoric to the test

Is the mining & metals sector prepared for a global downturn?

Is the mining & metals sector prepared for a global downturn?

Russia's actions in Ukraine fueled an unprecedented rally in mineral and metal prices earlier this year, with multiple metals breaking historical records. However, this rally was short-lived. Within six months, metal prices collapsed back to 2020 levels in the most volatile first half of the year. There are myriad factors that are lining up to cap mineral and metal prices in the coming months, the most significant of which, we believe, is the rapid deterioration of the global economy.

In recent times, the mineral commodities cycle has been out of synchronization with the global macro-economic cycle—this time the cycles appear to be converging. With the prospect of global downturn looming, we ask the question, "Is the mining & metals sector prepared?" Is the sector truly resilient to disruption in supply chain, inflationary pressures, headwinds on demand, increased funding costs and of course, the drive to net-zero? Or will China's fiscal and monetary policies and the latest legislative developments in US and EU regulation provide enough support to the sector so that miners and the rest of the supply chain can capably respond to market conditions? Can the ESG agenda and decarbonization projects contribute to the long-term sustainability of the sector itself?

We are thinking critically about what a downturn means and whether this could, in fact, be a major opportunity to distinguish the sector from its traditionally dominant counterpart, the oil & gas sector. We hope you find Mining & Metals 2022: Putting the Resilience Rhetoric to the Test a stimulating read.

Decarbonizing in a downturn: Can the mining & metals sector afford (not) to change?

A steady supply of minerals critical to the energy transition must be ensured through the expected recession.

How mining & metals companies can make ESG work in a downturn

Mining & metals companies have been increasingly focusing on enhancing their environmental, social and governance credentials in recent years as part of the energy transition. But with a global recession looming, will they be able to maintain their commitment?

China is looking beyond its borders to maximize the returns from the minerals needed to make the energy transition happen.

Opportunities in a downturn: Capital raising and getting the “right” M&A deal done

Participants in the mining & metals supply chain will see many challenges—but also opportunities—in playing both offense and defense in an economic downturn.

Liability management opportunities for mining & metals companies during a downturn

Mining & metals companies can take advantage of low prices in the leveraged finance markets to manage their liabilities amid the expected recession.

Financial crime flourishes in a downturn, and the mining & metals sector is not immune to it. The sector faces a number of industry-specific risks, and will need to react to the ensuing likely surge in enforcement activity.

China is looking beyond its borders to maximize the returns from the minerals needed to make the energy transition happen.

China is one of the biggest producers of the critical minerals and rare earth elements that are essential to the energy transition—those used in the manufacture of elements such as electric vehicle (EV) batteries, and to construct offshore and onshore wind and solar power plants.

As production in these areas around the world scales up, China's central role in mining the minerals essential to these new technologies is helping the country meet its carbon-neutrality targets and satisfying the growing appetite for minerals such as lithium, nickel and cobalt, and metals including copper and zinc.

2022 has seen Chinese miners solidify their market-leading position in the EV sector as well as others central to the energy transition, through contracts and deals in both established and emerging minerals markets.

For example, in January 2022, the Chilean government awarded BYD a contract to extract 80,000 metric tons of lithium over the next 20 years. BYD is one of the largest automotive companies in China and recently announced its intention to fully focus on EVs. Also in January, Zijin Mining Group completed its acquisition of Neo Lithium Corp. and took over the Tres Quebradas (3Q) Lithium Project in Catamarca Province, Argentina.

Chinese miners are also ambitiously searching for "white gold" outside of the "lithium triangle" region of Argentina, Bolivia and Chile. In April 2022, Zhejiang Huayou Cobalt acquired the Acadia lithium mine in Zimbabwe while in May, Zijin Mining bought a 15 percent stake in the Manono lithium-tin project in the Democratic Republic of the Congo (DRC). The Manono project is believed to contain one of the world's largest lithium-rich deposits capable of development through open-pit mining.

Chinese companies are the predominant foreign investors in the nickel sector in Indonesia, the world's largest producer of the mineral. Just this year, Huayou and Ningbo Contemporary Brunp Lygend (CBL), a subsidiary of Contemporary Amperex Technology Co. Limited (CATL), which currently holds the title of the world's largest EV battery maker, both announced a number of high-profile initiatives. This activity shows there is an ever-deeper foray into the nickel downstream value chain by Chinese companies.

Chinese companies also have interests in 15 of the 19 cobalt mines in the DRC, where approximately two-thirds of the world's cobalt is produced. China Molybdenum (CMOC), one of the largest cobalt producers globally, is pressing ahead aggressively in the DRC by expanding its Tenke Fungurume cobalt and copper mine, and developing the adjacent, green field Kisanfu cobalt mine that it co-invested in with CATL. CMOC expects Kisanfu to begin operation in the first quarter of 2023.

The level of activity by Chinese battery material companies can be starkly contrasted with the backdrop of a slowing Chinese economy. However, despite this economic slowdown and the temporary impact on EV demand caused by COVID-19 lockdowns, the fundamental outlook on the growth of the Chinese EV industry remains bright given the huge and resilient demands in China.

This optimism is also reflected in the ever-rising lithium price and generally solid copper and nickel prices during the past 12 months. 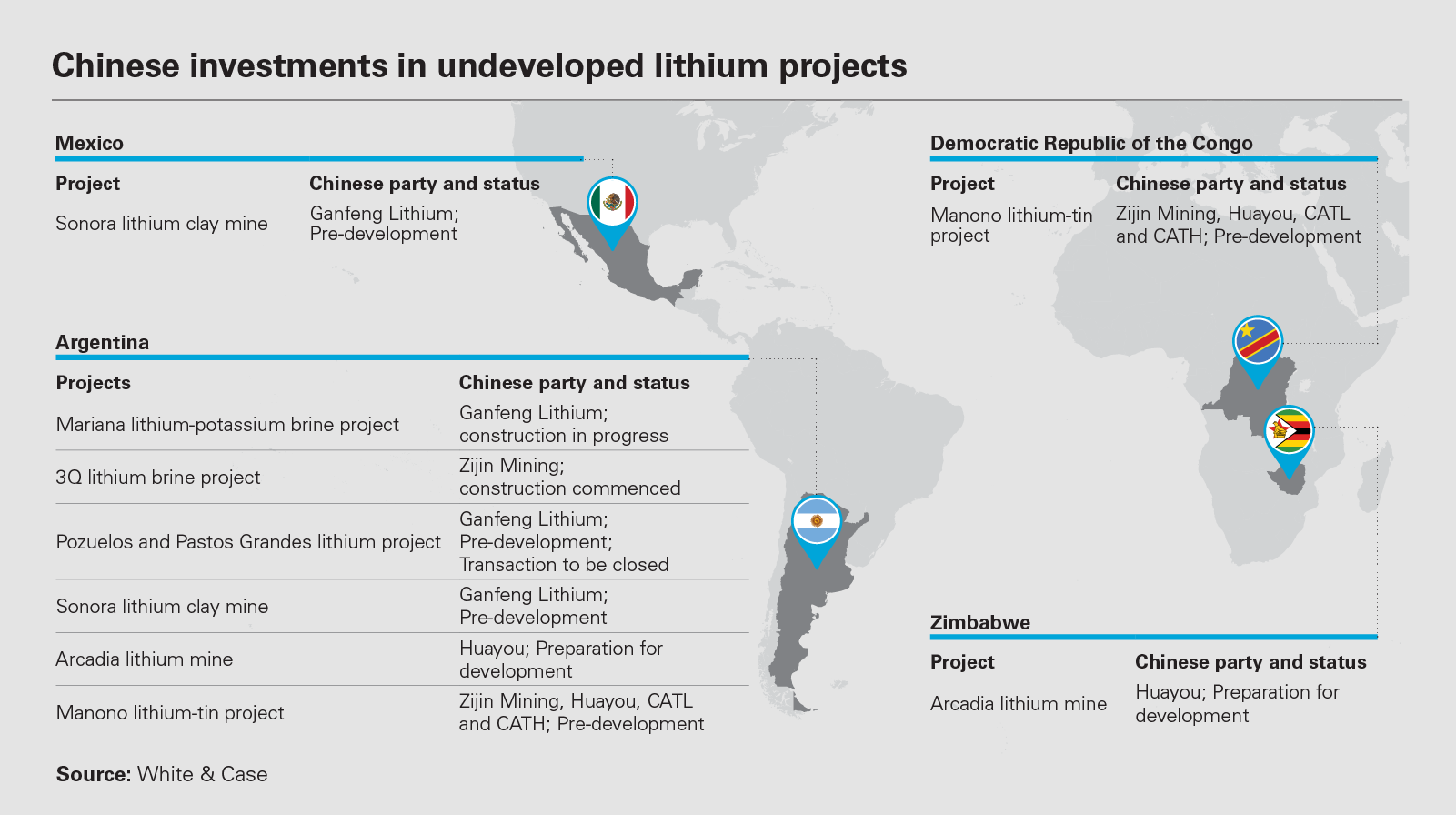 Increasingly, leading Chinese battery makers are strategically setting up their production facilities to be closer to key markets. This allows them to be more adaptable and receptive to the needs of their customers and directly leverage local or regional incentive policies for EV industry participants.

Following the establishment of its German cell plant in 2018, CATL announced in August 2022 the construction of a €7.3 billion (US$7.27 billion) battery plant in Hungary, with an estimated capacity of 100 GWh. Construction is expected to commence by the end of 2022.

CATL pointed out that the new plant is closely situated near a number of European automotive companies, and that it would be supplying both cells and modules to its prospective customers.

Envision AESC, another leading Chinese battery company, announced in March a plan to co-invest with Mercedes Benz in a US battery plant to provide battery cell modules to the company's new all-electric vehicles targeting the US market.

For example, CBL's Indonesian battery industry chain projects are not limited to the production of EV battery materials, but cover other integrated processes, including battery manufacturing and battery recycling. 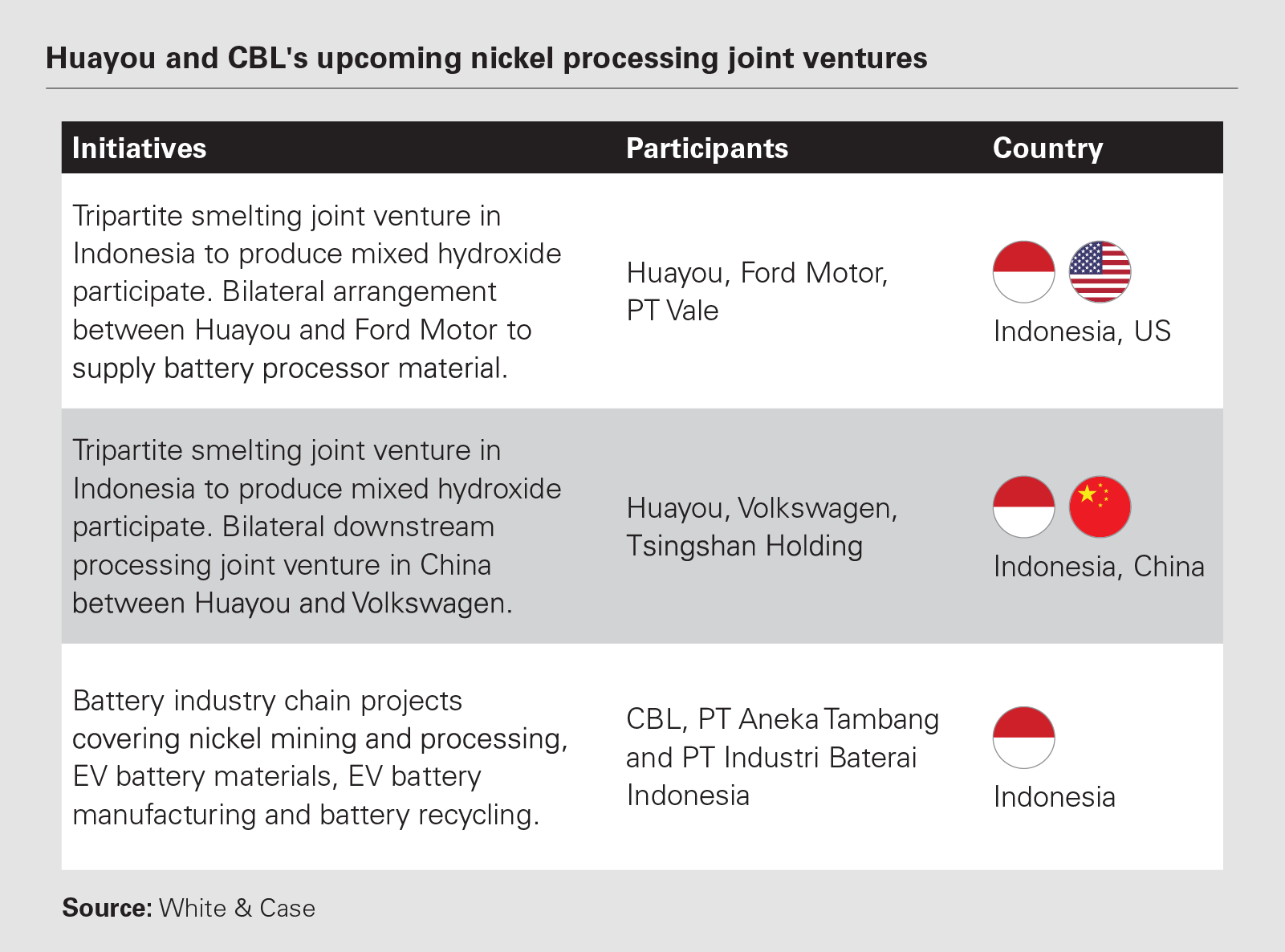 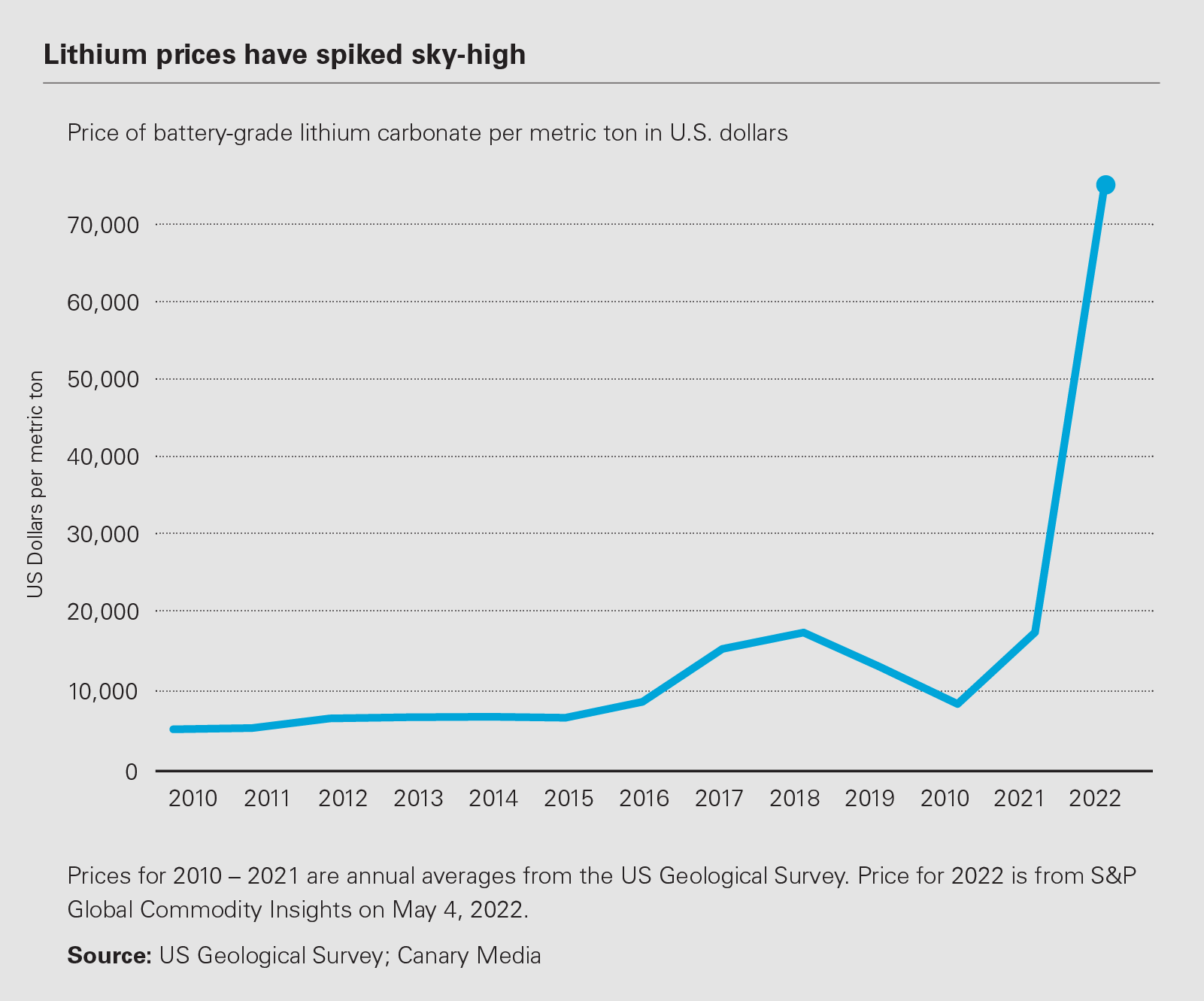 While the EV sector might be the main target of investment right now, China remains a key player in the production of other minerals, metals and rare earths, which are key to reducing the global carbon footprint. Indeed, a 2020 report from the European Commission described China's role in the supply of rare earths to produce magnets for wind turbine generators as "quasi-monopolistic."

In December 2021, China merged three state entities to create the China Rare Earth Group, which according to reports will control approximately two-thirds of Chinese rare earth production—or about a third of global supply. It is yet unclear whether the new group will focus on domestic supply, production and refinement of rare earths, or whether it will also look at investing overseas.

Rare earths can be found across the world, giving plenty of opportunity for Chinese companies to move internationally should they wish to expand beyond the plentiful domestic supply of these minerals. There is already, of course, Chinese money in foreign rare earth production—for example, US-based MP Materials is minority-owned by Chinese company Shenghe Resources, which buys MP's rare earth concentrate for processing in China.

Shenghe also signed a non-binding memorandum of understanding with Australia's RareX in February 2021, paving the way for potential Chinese investment in RareX's projects and joint investments in refineries outside of China.

China is also a major supplier of metals such as zinc and copper, which form other important parts when it comes to constructing renewable energy power plants. Chinese companies are major investors in copper and zinc mines in regions such as Africa and South America, and in the first months of 2022, China became a net exporter of zinc for the first time as the energy price crisis hit European producers.

Global uncertainty and the renewal of Chinese COVID-19 lockdowns impacted zinc prices in particular in the second quarter of 2022, but analysts expect a rise in demand as government stimuli kick in. There is no doubt that China will remain a key player in this market too, both in terms of domestic production and overseas investment.

Even amid the economic downturn, Chinese battery mineral companies continue to invest in record numbers of overseas projects in order to secure resources required for the EV and renewable energy industries. They have also begun to set up localized production facilities to serve key markets, and to extend their cooperation with end-users in the industry to the downstream end of the minerals and metals processing value chain.

By ensuring access to upstream resources and developing integrated supply chains with co-investment by offtakers of the production of the supply chain, Chinese minerals companies have not only addressed security of supply risks and the need to address ESG expectations of customers with respect to their supply chain, they have also positioned themselves to manage their input costs across the supply chain and their exposure to material negative movements in offtake prices in the event of a global downturn.

As such, Chinese miners are well positioned for the global downturn—as well as the inevitable rebound and the accelerated transition from internal combustion to EV vehicles, and to renewable energy, that will accompany it.