While the overall European non-performing loan (NPL) market has been in decline since its peak in 2018, the ongoing impact of COVID-19 may soon change things.

Key figures: At a glance 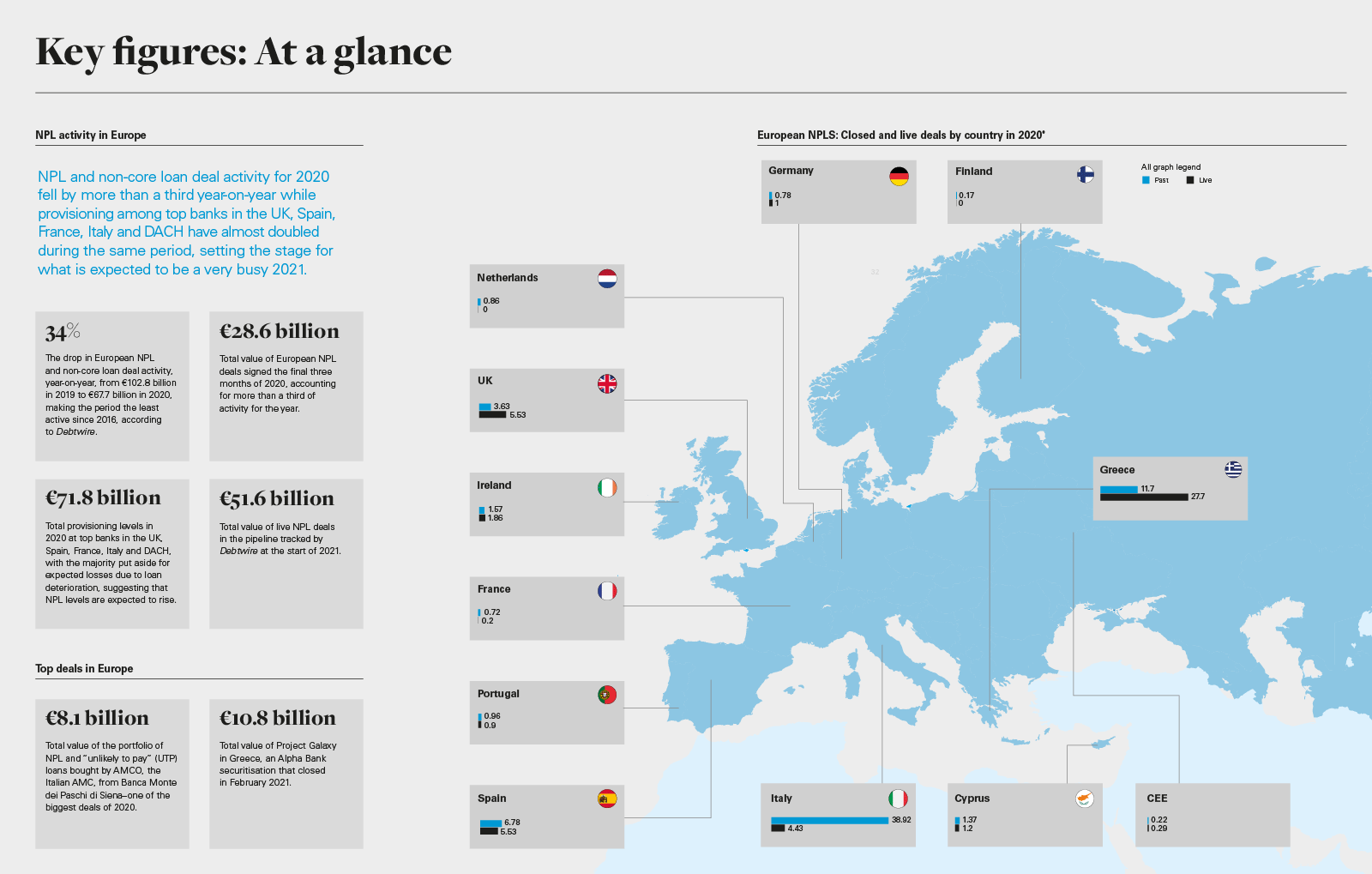 In a poll of audience members watching Fitch Ratings' Credit Outlook conference, held in January 2021, nearly 70 per cent said they expected a rise in European NPL sales in the year ahead, driven by capital management in banks holding the loans as well as non-bank financial institutions improving their handling of NPLs.

While a rise in NPLs is likely on the cards, the scale and timing of such developments remain largely unknown. Government-led relief measures have made it almost impossible to assess how some businesses have performed during the pandemic.

And as the EU's Economic Governance Support Unit pointed out in its analysis of the EU's regulatory and supervisory response to addressing NPLs, published in February 2021, the situation for lenders is not particularly transparent: "The COVID-19 crisis and the policy reactions to avert its damaging economic and social effects have exposed banks to further deterioration of their assets. Effects on banks' balance sheets are yet to be felt and quantified."

Then there are other unknowns to consider. For example, the current economic situation is not the result of a "credit crunch." The impact of COVID-19 was sudden and has lasted longer than many anticipated, but liquidity has not necessarily been an issue. Lending paused in the second quarter of 2020, as did virtually everything, but activity picked up significantly in the second-half of the year. Interest rates remain low and, by and large, companies needing to address any debt repayment concerns have had the opportunity to do so.

Post-COVID-19, many businesses that were forced to close their doors for the duration will also remain viable—albeit with weakened balance sheets—and their recovery is entirely possible. Sectors hit particularly hard by the pandemic, from leisure and hospitality to airlines, are likely to struggle more than most, but even they will see recovery once the public is free to take advantage.

At the same time, consumer habits and preferences may have been changed entirely by this experience, to say nothing of people's work habits, and time will tell how this plays out. Many supply chains will also have been altered and may not return to pre-COVID-19 levels, changing the business landscape significantly.

What all of these unknowns mean for the future of NPLs is not yet clear. But the resurgent waves of COVID-19 across Europe, coupled with delays in vaccine deliveries and rollouts, suggest that European NPL volumes are likely to increase in the months ahead, as businesses are forced to make increasingly tough decisions about their future. Increases in bank provisioning certainly points to an uptick in NPL activity. As such, borrowers, lenders and investors alike will need to keep a close eye on how the story plays out once the dust begins to settle.