Although Down From 2021's Record Level, U.S. Merger Control Filings Are Above Historical Averages with November 2022 Merger Filings Showing a Cooling of Year-End HSR Activity 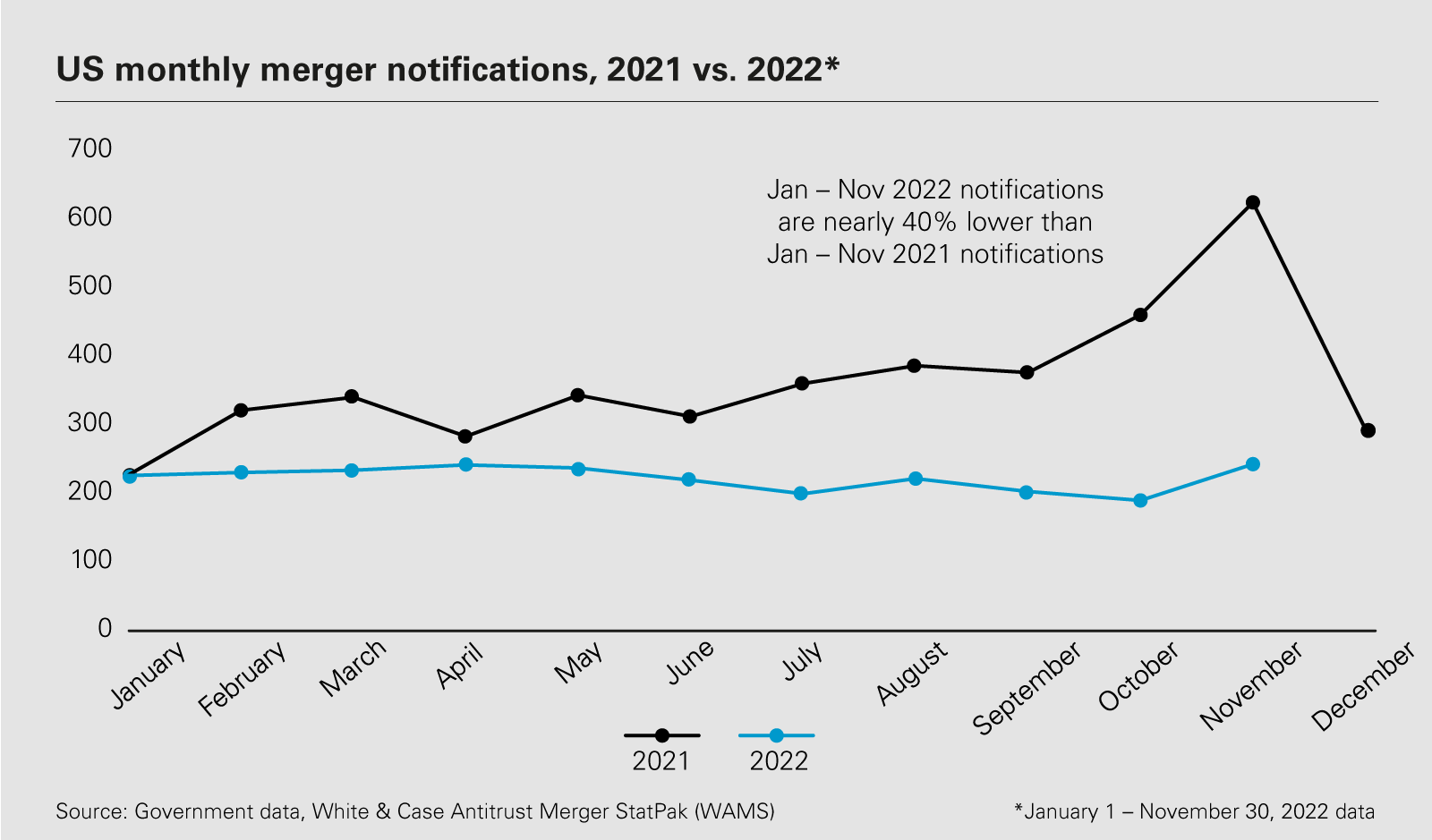 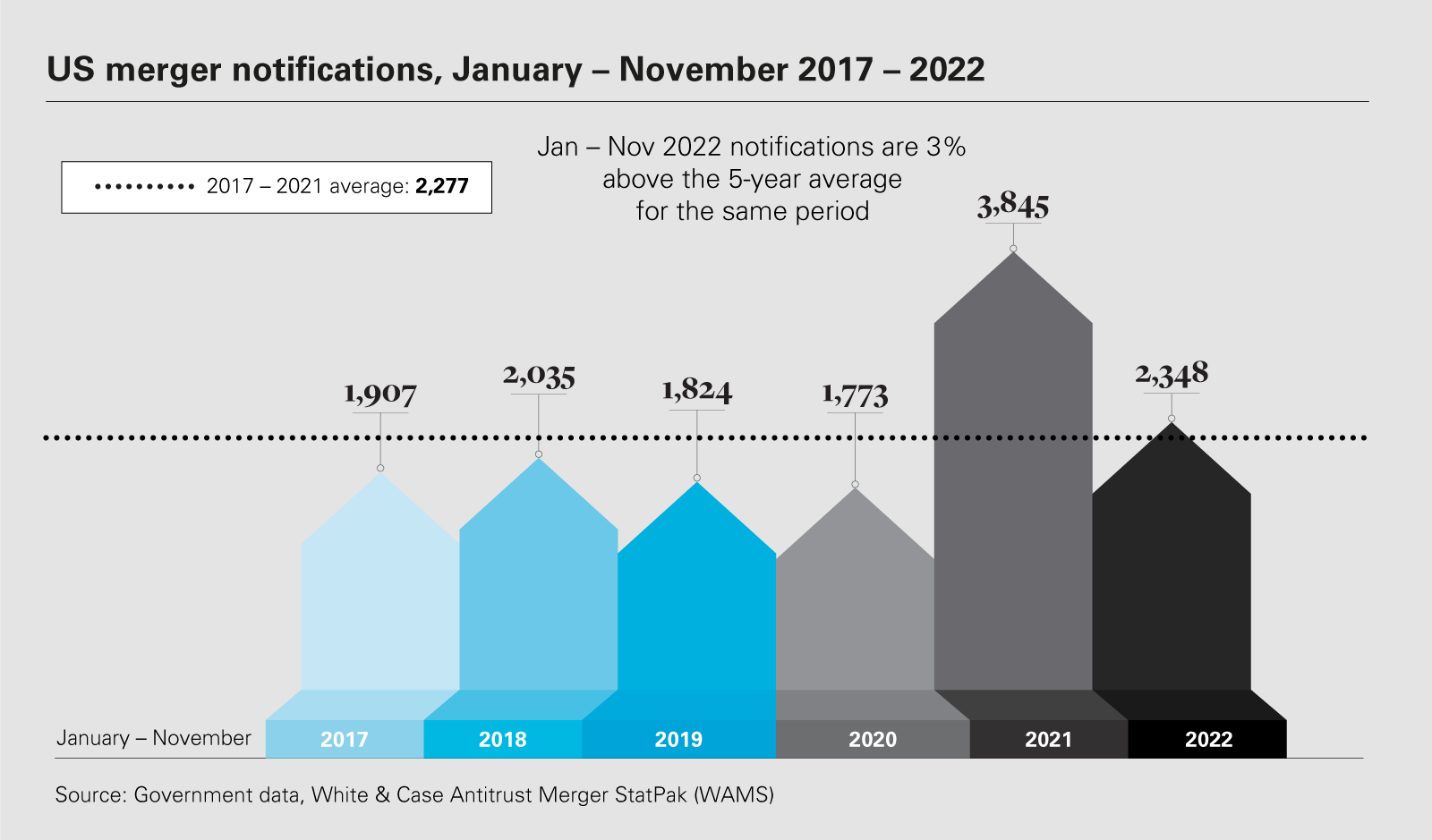 Looking ahead: The DOJ and the FTC are expected to release new merger guidelines in late December or early 2023. In January 2022, the DOJ and the FTC announced plans to revise the 2010 Horizontal Merger Guidelines and the 2020 Vertical Merger Guidelines. The new merger guidelines are expected to significantly alter the existing frameworks for assessing mergers. 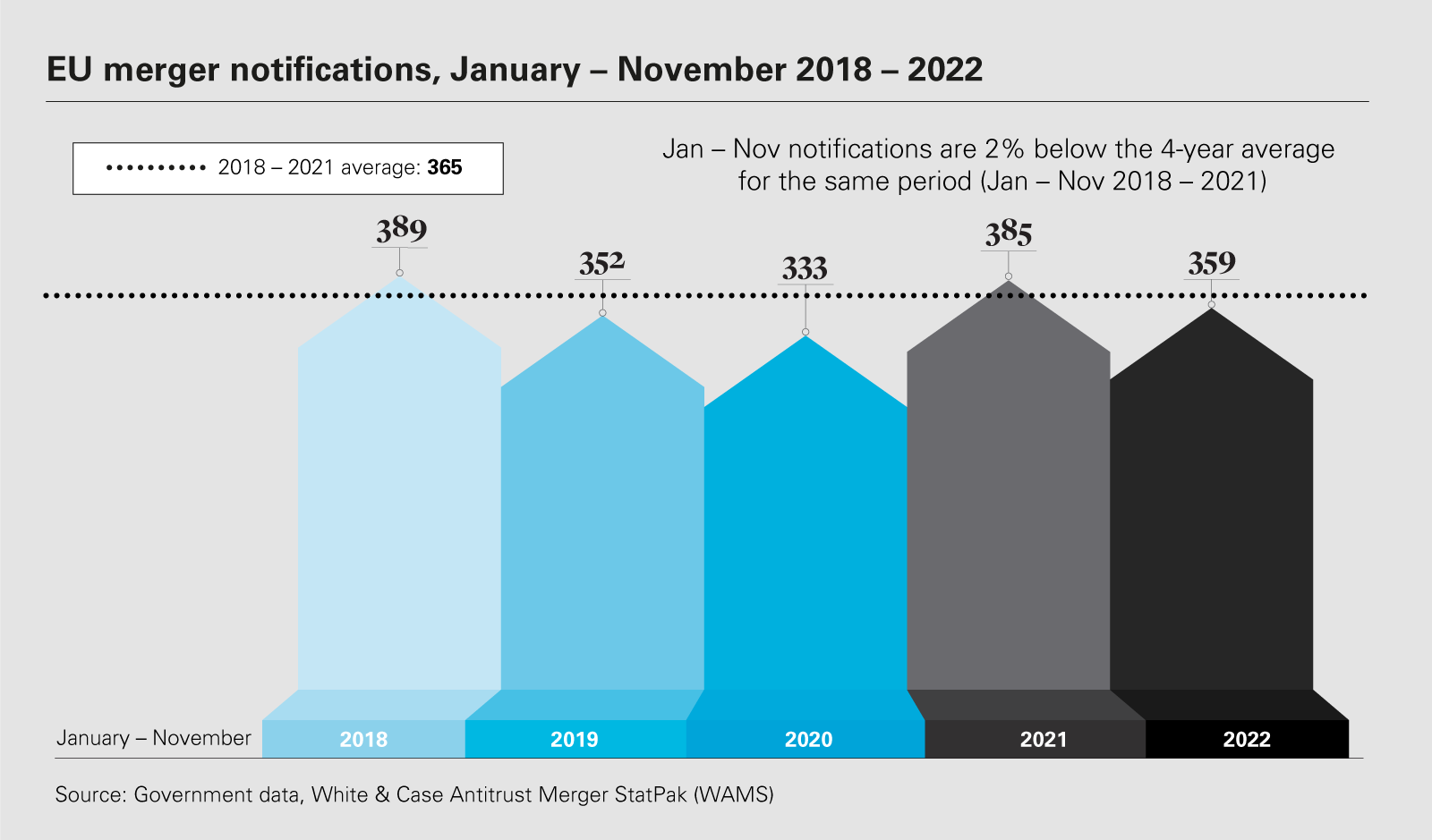 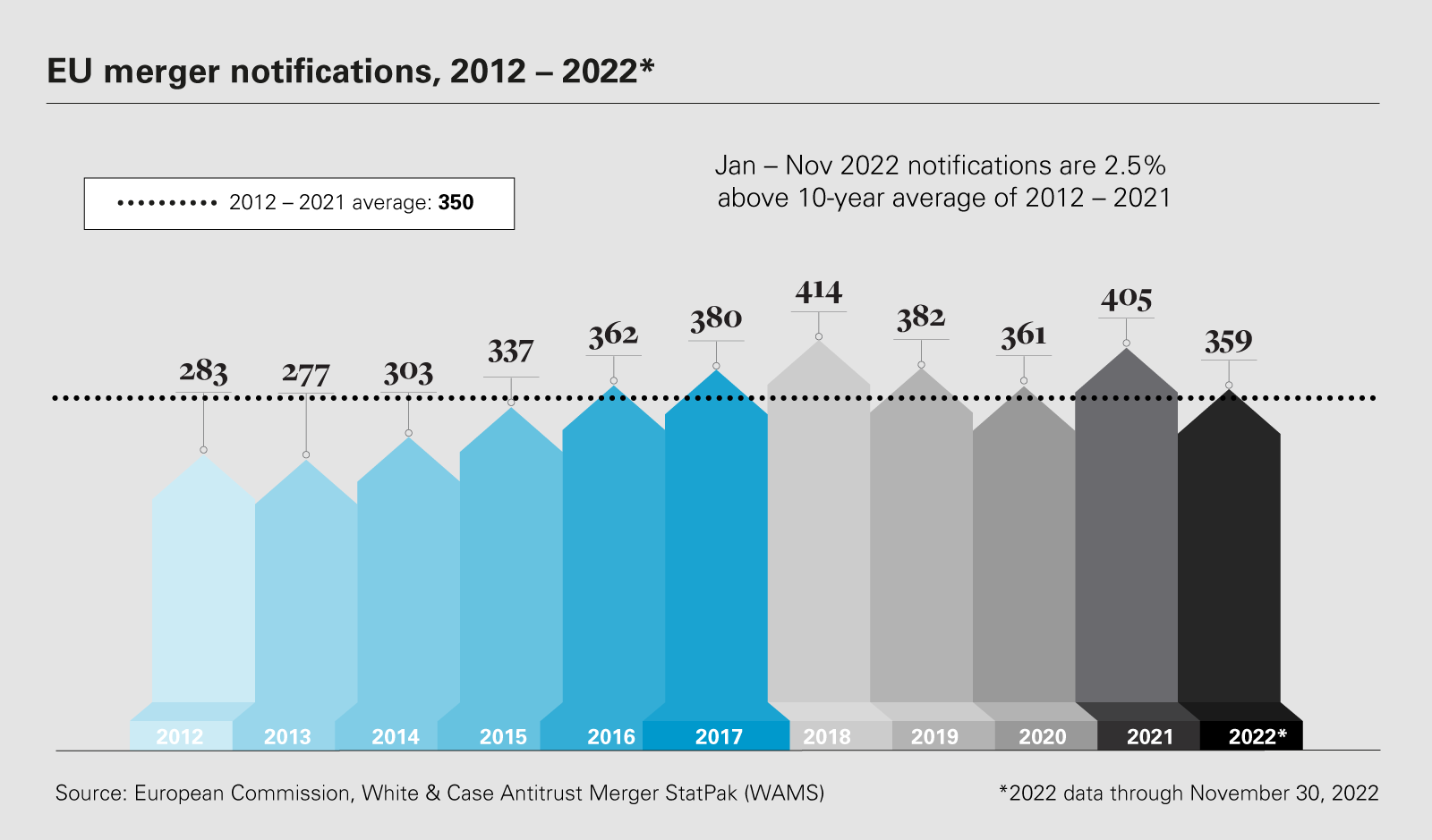 The AMCU also continues to initiate investigations and take enforcement actions, issuing fines for failure to notify transactions amid the invasion. As of November 30, 2022, the AMCU completed six Phase II proceedings initiated in 2021 related to one deal in the energy sector and has initiated at least six new Phase II cases in 2022. Three of the investigations are in the energy sector, while the others are in chemicals, pharmaceuticals and grain storage. The AMCU has issued 21 fines for failure to notify a merger with fines ranging between USD 2,000 and USD 60,000.

The AMCU is operating from Kyiv. Except for a three-month period of inactivity during the beginning of the war, the AMCU has tried to maintain normal statutory review timelines.

Looking ahead: Air raids and power shortages continue to cause interruptions to normal operations, therefore, longer than usual review periods may be expected in the coming months.  The AMCU is unlikely to apply fast-track review and rejections of notifications on technical grounds are expected to be more common.  Nevertheless, deals without significant impact on local markets should benefit from a standard Phase I review. 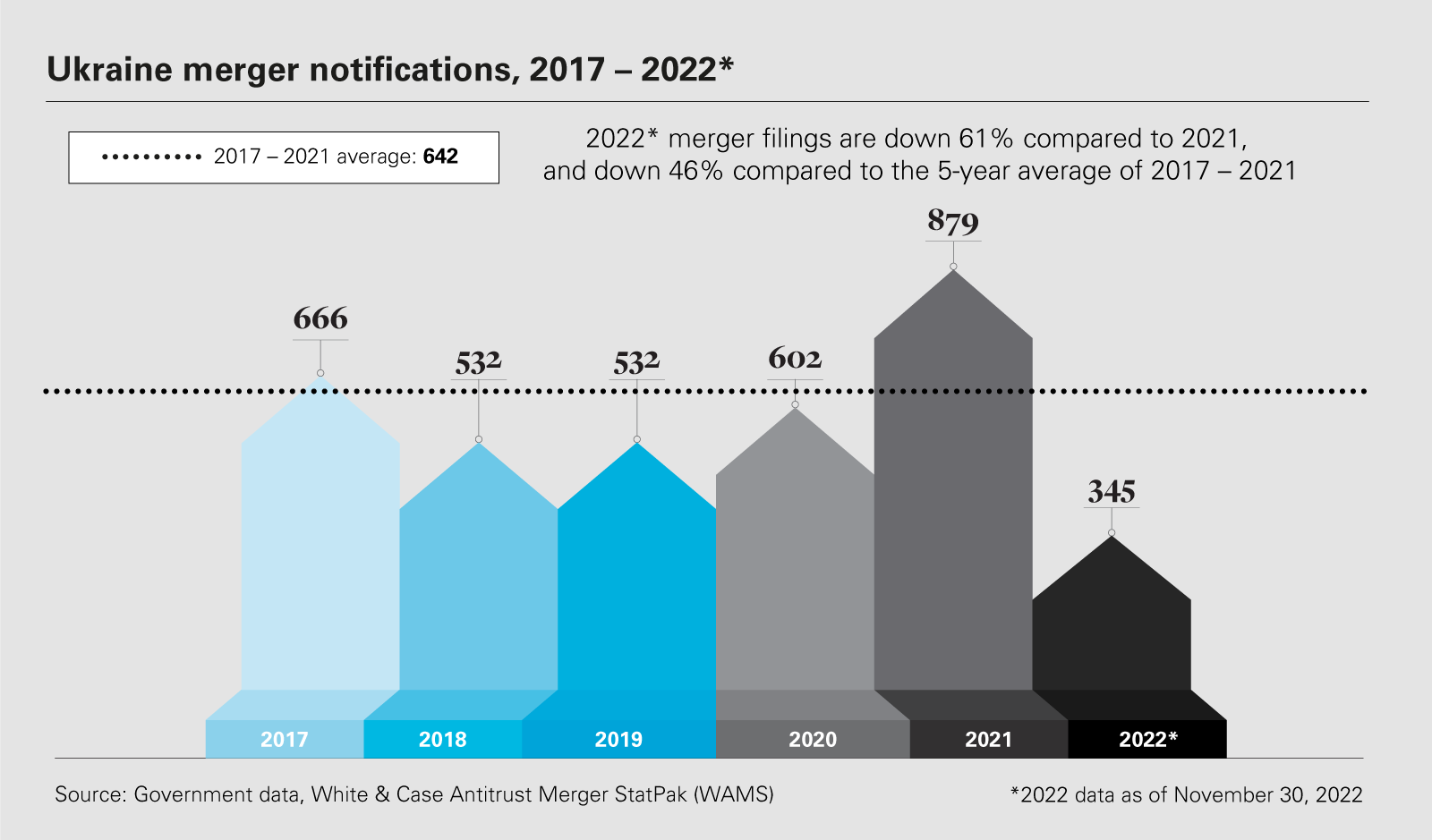 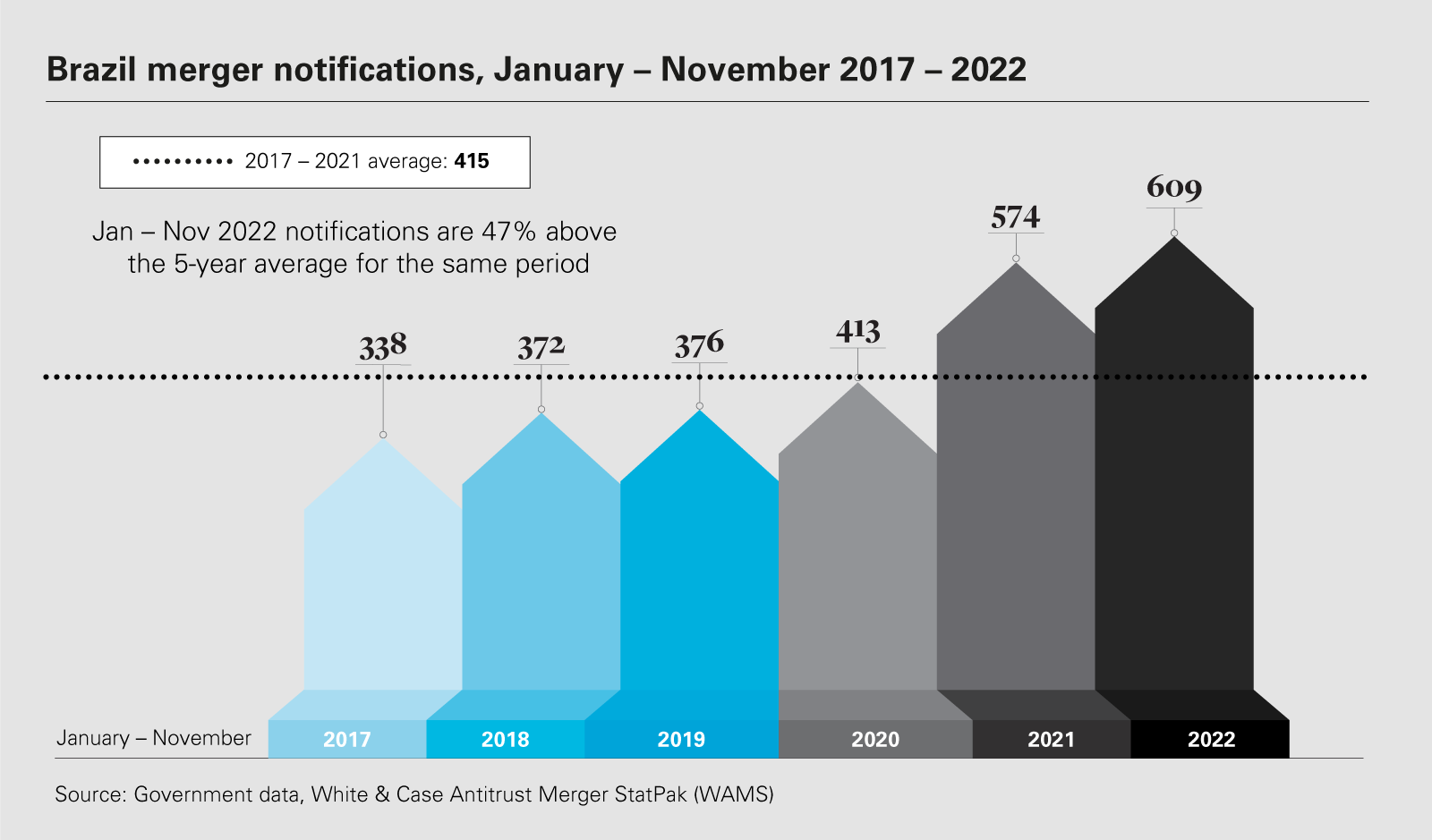 Looking ahead: The election of Luiz Inácio Lula da Silva, who will take office in January 2023, is not expected to have major impacts on antitrust enforcement in the short term. CADE's most senior positions (CADE's President, General-Superintendent and Commissioners) have fixed terms, and they cannot be removed by President Lula da Silva. The term of CADE's President ends in July 2025, and the term for the General-Superintendent ends in April 2024. 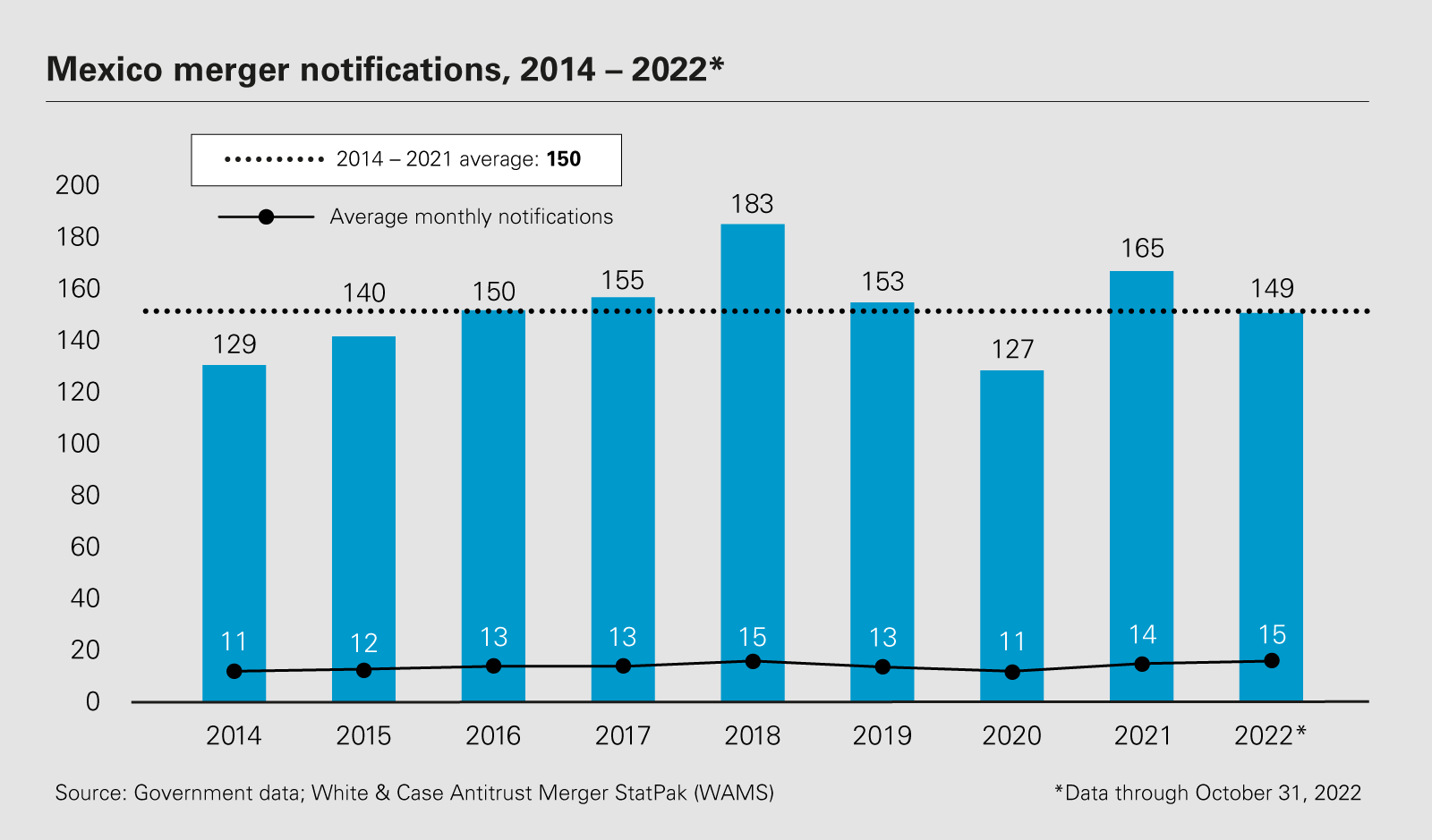 In 2022, COFECE has taken an aggressive approach to merger enforcement. COFECE is actively reviewing and assessing common ownership among the notifying parties, and examining transactions post-closing to ensure parties adequately notified prior deals. As a result of this scrutiny, parties can expect a longer review period and heightened burden of proof; however the new scrutiny has not deterred merger filing activity.

Looking ahead: Currently, there are three vacant seats on the COFECE board of commissioners. As a result of a recent ruling from the Mexico Supreme Court of Justice, Mexico's President, Andrés Manuel López Obrador, will have to fill these vacant seats. President Obrador has only appointed one individual to fill one of the vacancies, but the appointment is still subject to ratification by the Senate. The new board composition may change COFECE's enforcement policy. Beyond these changes, practitioners should anticipate an increase in the number of gun-jumping investigations in 2023. This is expected to continue a trend from 2022 of COFECE investigating gun-jumping actions as part of its investigations into already consummated transactions. 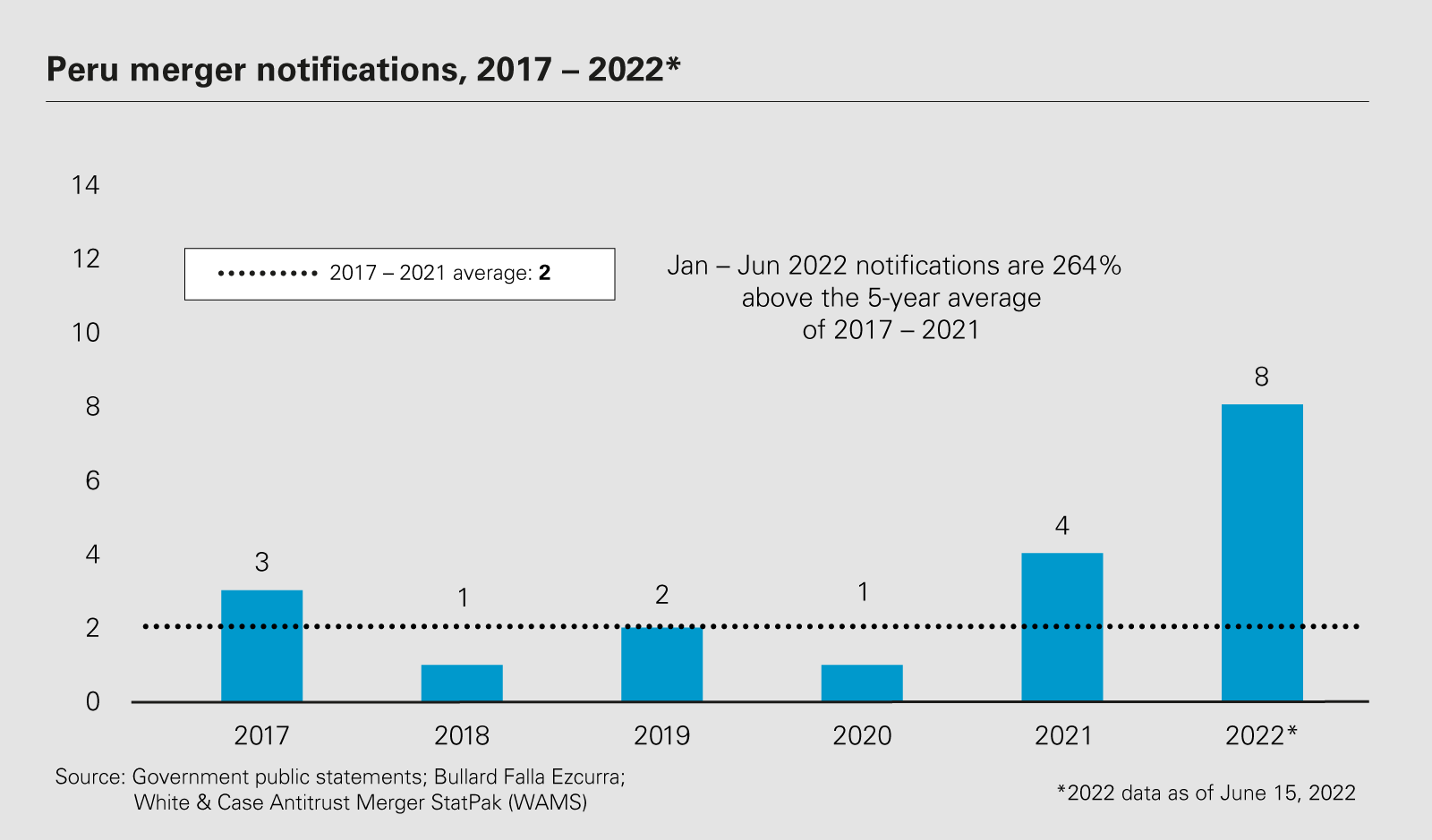 Looking ahead:  During the past few months, Indecopi has been active in issuing guidance and rules for the new regime.  In May 2022, Indecopi published draft merger guidelines, which outlines criteria Indecopi will use to analyze the competitive effects of a proposed transaction, among other guidance for merging parties.  In 2023, merging parties can expect more notifications, Phase II investigations, and final merger guidelines from Indecopi.

Merger control filings in Turkey in 2022 are keeping pace with 2021 merger filings and are expected to exceed 2021 filings by year-end 2022.2 From January 1, 2022–June 30, 2022, the Turkish Competition Authority (TCA) has reviewed 152 transactions, cleared without commitments 130 transactions, and found 20 transactions non-notifiable. The TCA only releases merger filing activity data biannually. 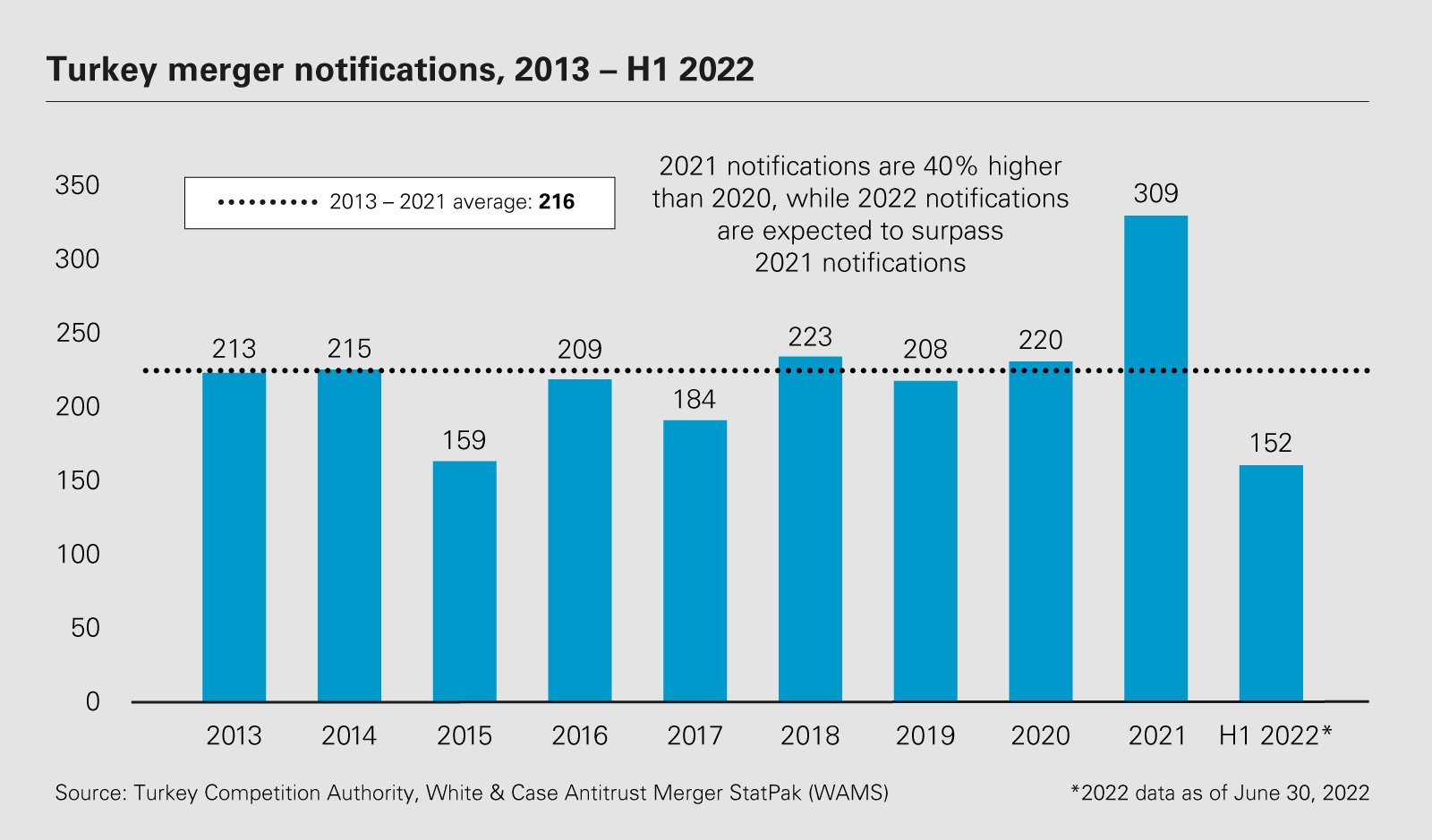 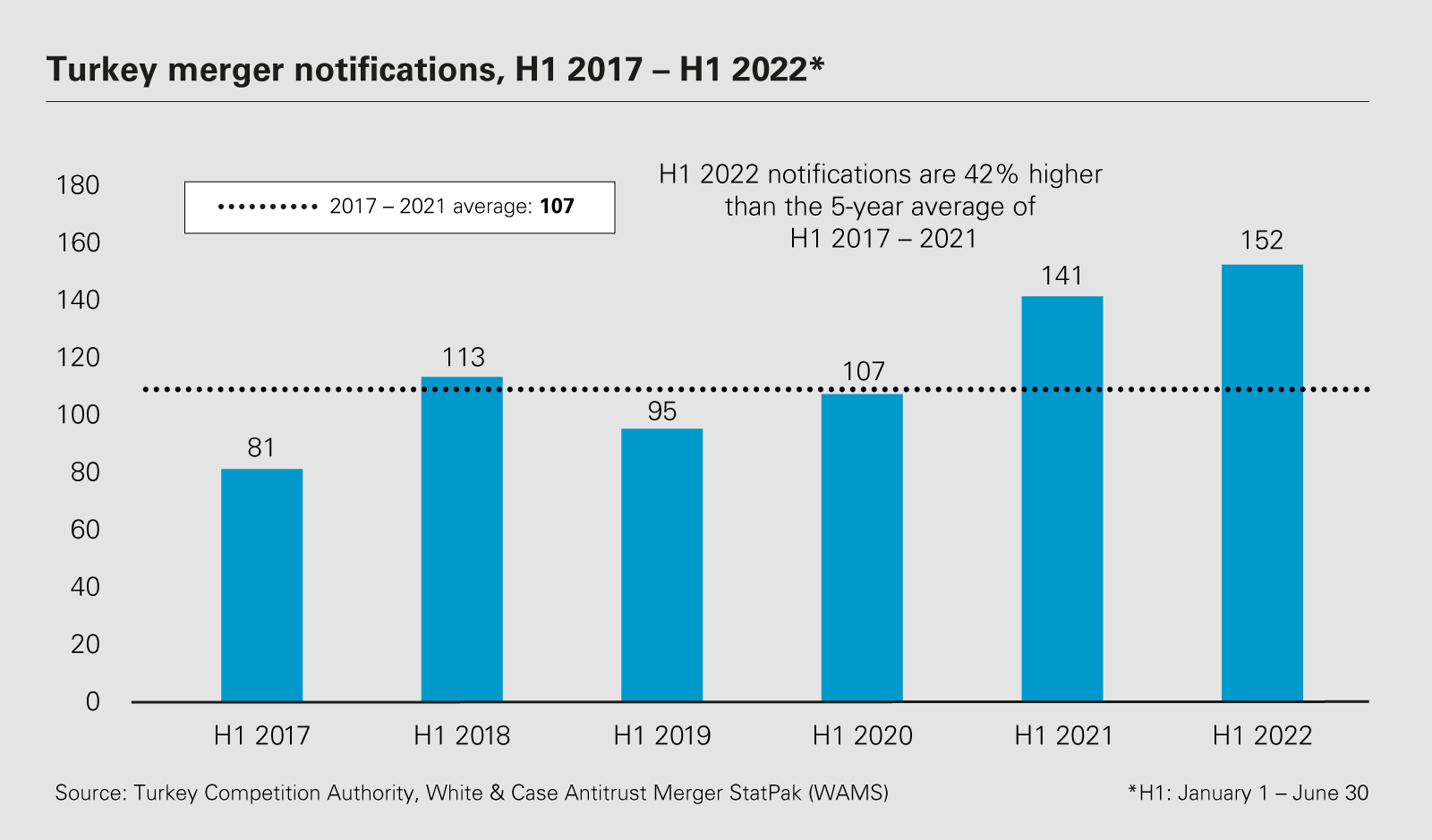 These increases in 2022 merger filing activity in Turkey come in a year in which the TCA made significant changes to merger control rules and procedures. In 2022, the TCA: (i) increased the turnover threshold eightfold; (ii) revised the format and scope of the notification form, making it more burdensome for parties to complete, where there is an affected market; and (iii) removed the "technology entity" exception, meaning that any technology company would be subject to a merger control filing regardless of its turnover generated in Turkey.

Looking ahead: In light of the foregoing, merger filing activity in Turkey is expected to reach its peak by December 31, 2022 and is expected to continue to show rapid increases in terms of the number and value of notified transactions in 2023.

Merger Notifications in Australia Are 39% Above Historical Four-Year Average

The Australian Competition and Consumer Commission (ACCC) has assessed an increasing number of transactions, continuing a year-over-year upsurge. Merger notifications in Australia are up 39% above the four-year average of 2017 – 2021, reflecting the attractiveness of Australia as an investment destination. As a non-mandatory notification jurisdiction, the ACCC can become aware of a transaction via a direct approach by the merging parties under the informal clearance or authorization regimes, through other regulatory agencies, or through monitoring and intelligence. The majority (94%) of the 2021 – 2022 transactions were assessed through pre-assessment, however the number of complex mergers assessed through a public review also increased to 26, up from 22 the previous year. 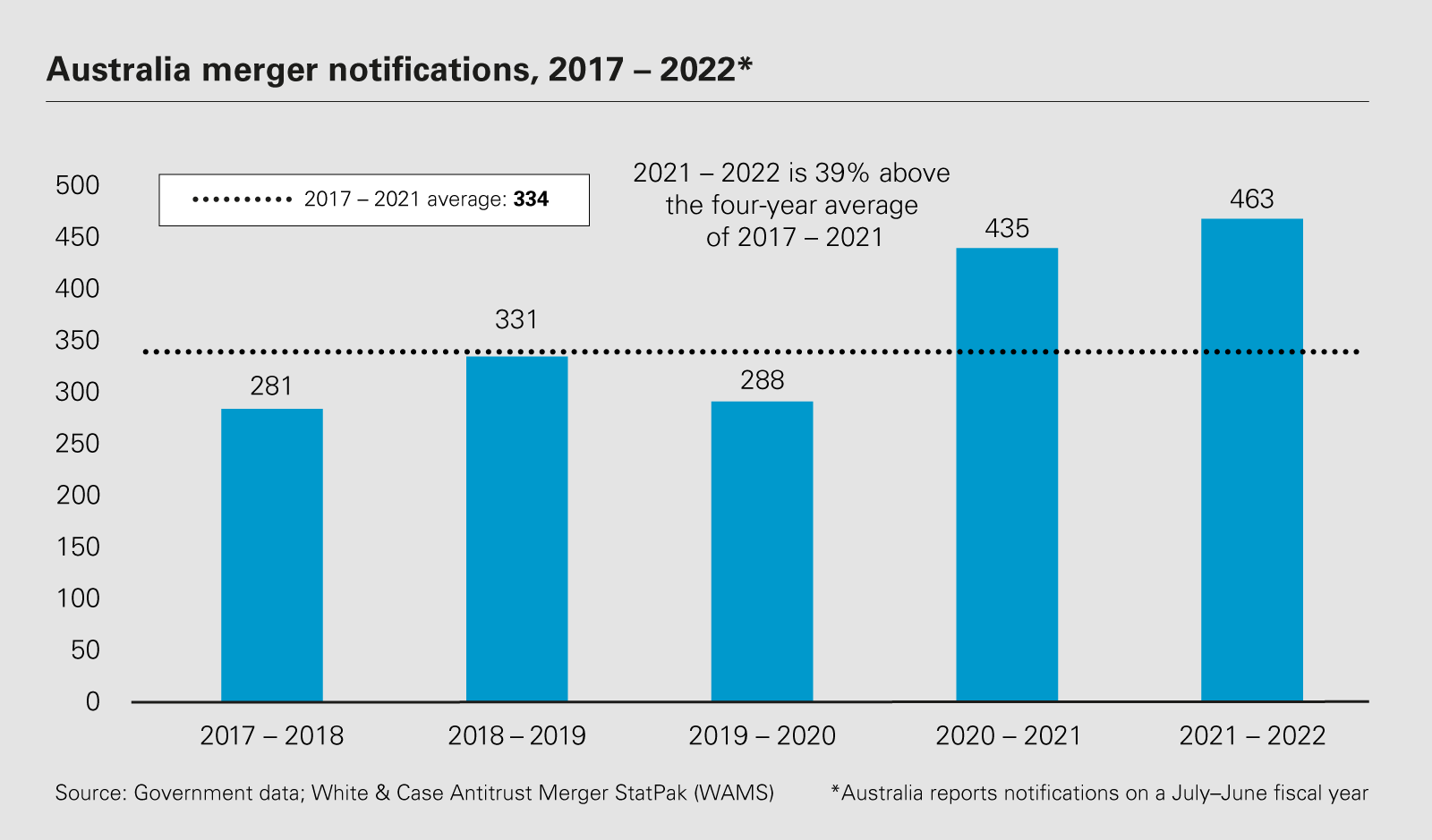 Looking ahead: The ACCC has proposed significant merger reform in the last 12 months, namely a proposal to introduce a mandatory and suspensory merger clearance regime and to focus on transactions involving minority interests. If the ACCC is successful, it is expected that the number of notifications in Australia will increase significantly.

Since Saudi Arabia adopted a new merger control regime in late 2019, merger control filings have continued on an upward trend, and 2022 is on track to break yet another record. The Saudi Arabia General Authority for Competition (GAC) reported at least 143 filings during the first three quarters of 2022.3  The GAC has not published Q4 data yet, but based on current estimates, at least 337 total filings are forecasted for 2022. However, actual Q4 2022 figures will likely exceed that estimate, as the last quarter in any given year typically witnesses a flurry of deals before the end of the year. 2022 represents a 14% jump in merger filings as compared to 2021, where only 295 filings were reported, and 2022 is estimated to be at least 189% greater than the 5-year average of 2017-2021. 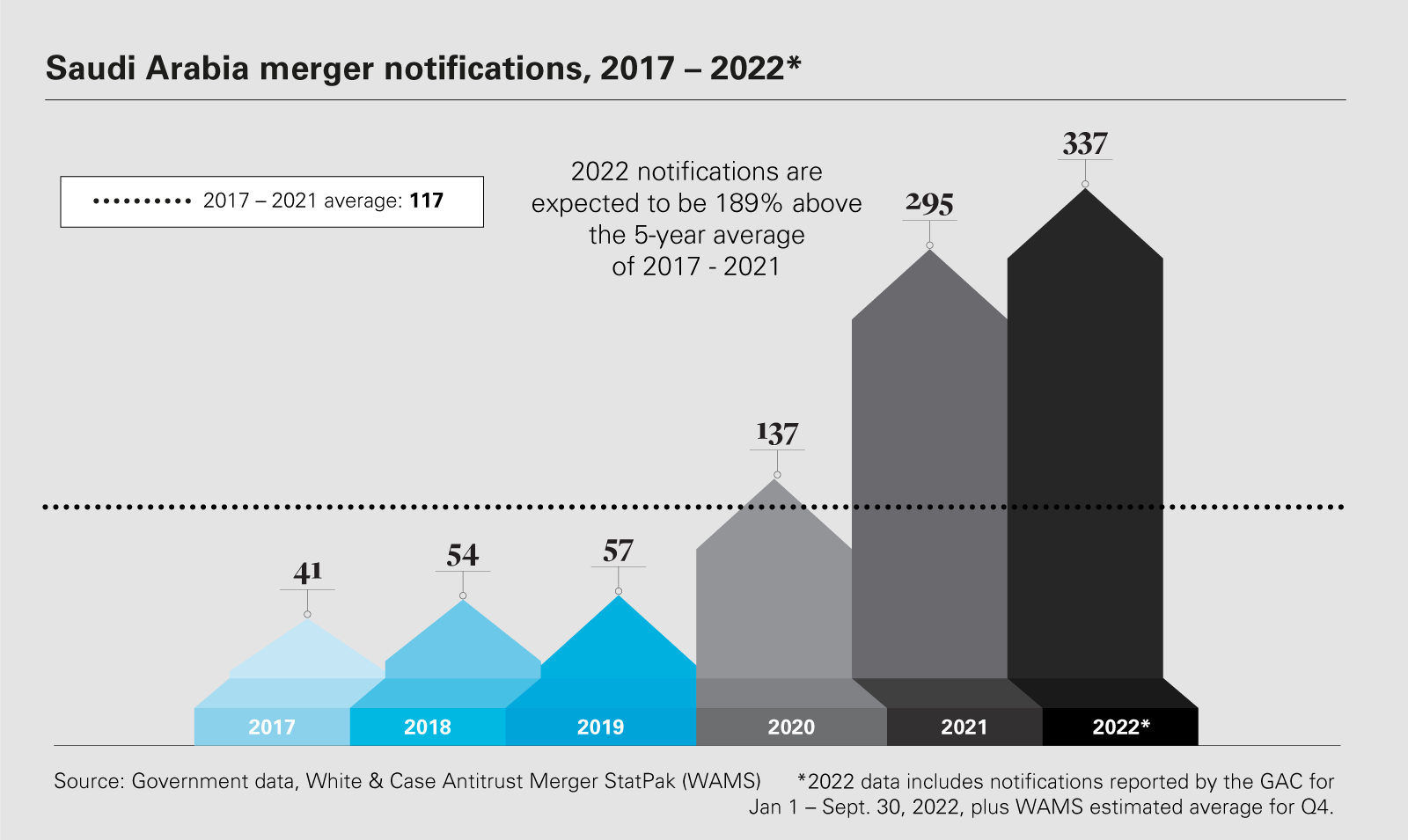 Looking ahead: The GAC's merger control activities in 2022 suggest more enforcement in 2023. This year, the GAC blocked its first deal on substantive grounds, based on vertical issues, and issued detailed Merger Review Guidelines to clarify the procedural aspects of merger filings and the substantive standards the GAC will apply to merger analysis. Further, the GAC has made process improvements in the merger filing and review process, leading to notably faster clearances during Q4 2022.

On December 6, 2022, the Egyptian Parliament adopted legislative amendments that will transform the country’s merger control regime from one that requires only post-closing notifications into a pre-closing clearance jurisdiction.  When the amendments go into effect, which is expected within a few weeks, they will apply new turnover thresholds and will focus on transactions where there is a change of control, among other changes.  Under the new system, the Egyptian Competition Authority (ECA) will have 30 working days to review a transaction, which can be extended by another 15 working days.  If the ECA identifies potential harm to competition, they would refer the transaction to a second review phase, which can last up to 60 working days (also subject to a potential extension of 15 working days).  Notably, the new regime also introduces heightened gun-jumping fines.  Failure to notify a reportable transaction would be subject to a fine between 1% and 10% of the value of the parties’ turnover or assets (whichever is highest), or a fixed amount between EGP 30 million to 500 million (approx. US$ 1.2 million to US$ 20.3 million) if the value of turnover or assets cannot be calculated.

Looking ahead: The new merger control regime is expected to result in more filings in Egypt.  Although the new turnover thresholds should limit the scope of reportable transactions, it is still possible to trigger a filing requirement if only one of the parties has turnover or assets in Egypt, which would apply to many foreign-to-foreign transactions among major global businesses.  Given the large potential fines adopted in the amendments, parties will be more likely to ensure compliance with the new regime.  The ECA is also expected to ramp up enforcement under the new regime, particularly as the ECA has been working to bolster enforcement collaboration among competition authorities of the Middle East and Africa, among others.  For example, in March 2022, the ECA led the effort to launch the Arab Competition Network, which includes 17 competition authorities from the region and aims to coordinate their enforcement efforts.

1 White & Case LLP is grateful for the contributions of Bullard Falla Ezcurra to WAMS.
2 The Turkish Competition Authority does not publish statistics on a yearly or monthly basis regarding the number of deals notified.  The WAMS data referenced here concerns decisions.
3 Based on WAMS analysis and estimates, and assuming the last quarter of 2022 will report an average number of filings as compared to the first three quarters.