The market for non-performing and non-core loan deals remains in business—but not in the way that many expected after COVID-19 shut down vast swathes of the European economy.

The banking sector's sale of legacy loans revived in 2021 following a marked slowdown in 2020, though the market did not return to the large-scale stocks of non-performing loans (NPLs) that were seen before the pandemic.

This may change if more distressed debt begins to emerge, having been protected by state interventions intended to support businesses affected by COVID-19. The events in Ukraine may also drive an increase in bad debt provisions and NPL volumes. For now, though, sellers, buyers and NPL market participants, such as servicers, are operating in a very different environment.

In this report, we take the temperature of that environment. The first section considers the changing dynamic of the marketplace, covering the outlook for NPLs, the rise of the secondary market transactions and the emergence of new types of NPL investors.

In section two, we take a deep dive into key markets across Europe. As in previous years, the economies of Southern Europe, led by Greece, Italy and Spain, were hotspots for NPL transactions. But other areas—notably Ireland, where NPL numbers were already relatively low—continue to see activity. Even in countries where banks are making very few disposals, the secondary market provides opportunities.

With so many unknowns, including the outcome of the situation in Ukraine and its impact on economics, the future for NPLs remains uncertain. But clear trends are emerging, from the growth of new entrants to the growing importance of data and analytics tools in driving value.

European NPLs: The journey from COVID-19 to Ukraine

While the spike in bad debt and subsequent tsunami of NPL and non-core loan deals that was anticipated due to COVID-19 did not materialise, the increasingly volatile market trends may lead investors to discover new and unexpected opportunities.

Europe's banks continue to defy expectations that the pandemic would drive a significant increase in NPLs—in fact, according to the EBA, not a single country saw its banking sector's NPL ratio increase in 2021, with the vast majority reporting an improvement.

What does the future hold for NPLs? There's still plenty of business to be done, but buyers and sellers alike will need to change tack to get the most from the available opportunities.

While the pandemic failed to produce heightened levels of toxic debt, the European banking sector also continued its efforts to reduce existing NPL volumes. The trend was particularly strong in Greece and Italy, with banks making good use of the state-backed schemes offering generous guarantees on large tranches of NPL debt.

Elsewhere, however, disposals were more limited, with activity shifting into the secondary market. This may prove to be temporary, with some banks reporting increased provisions in 2021. The longer-term impact of the pandemic is still far from clear and a rise in bad debt is possible in the most exposed sectors of the economy, including retail, leisure and tourism. And while European banks have limited direct exposure to events in Ukraine and Russia, the broader impacts of the situation will begin to bite.

In the meantime, however, the average bank's NPL ratio across the European Economic Area fell from 2.5 per cent to 2 per cent in 2021, according to the EBA. 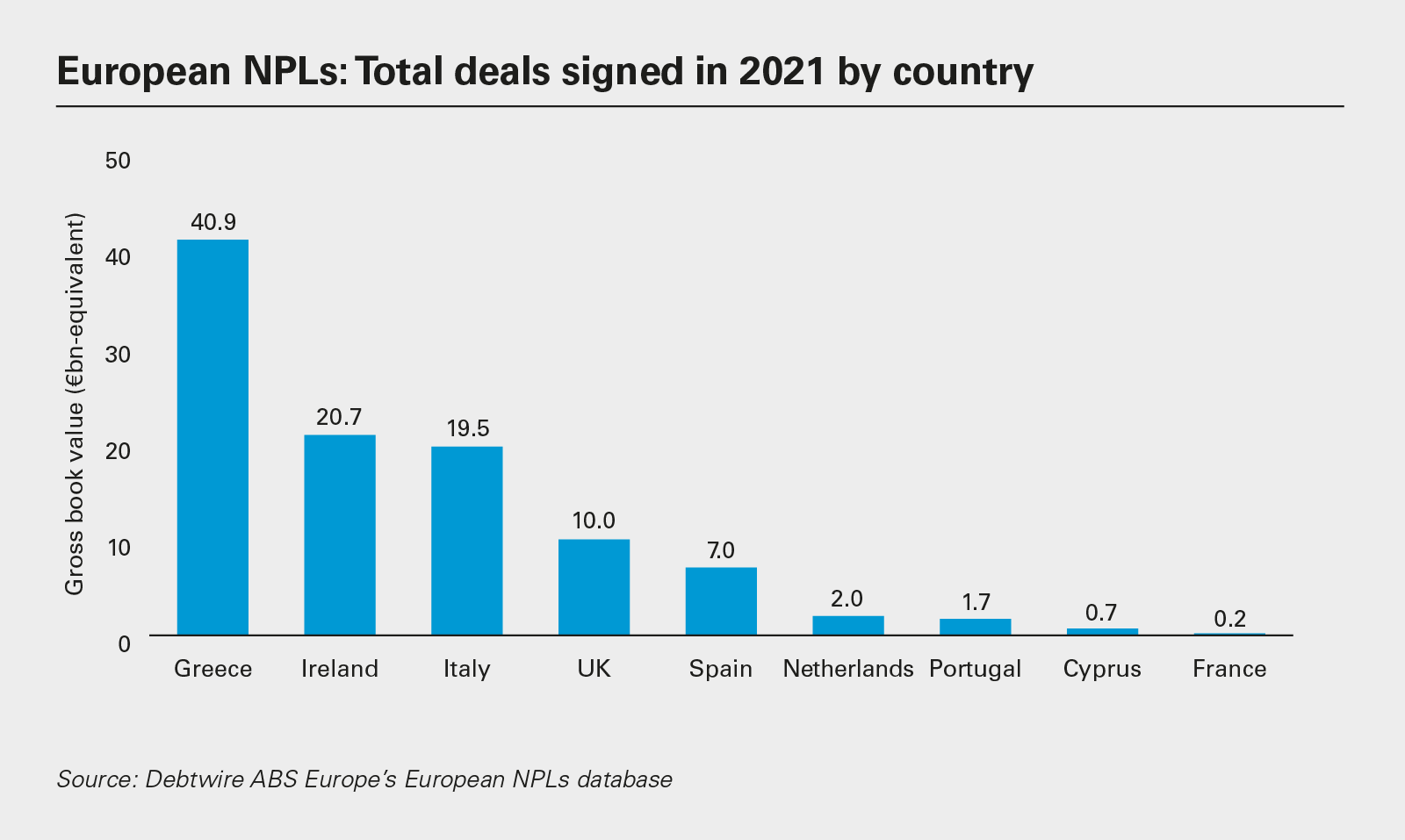 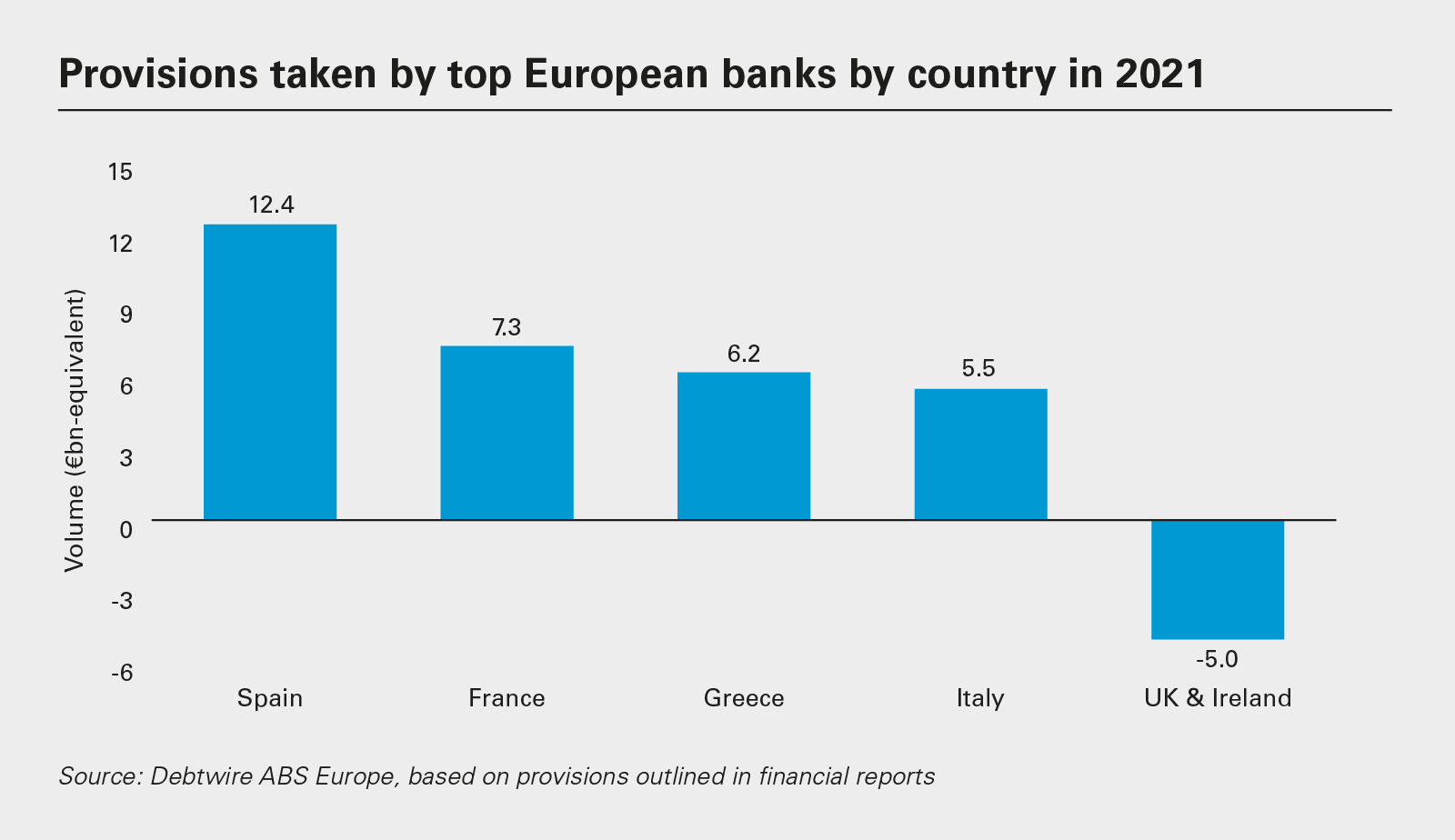 The success of the HAPS programme has seen the proportion of Greek bank loans classified as NPLs fall from a high of close to 50 per cent in 2016 to 25.5 per cent at the start of 2021 and just 7 per cent by the end of the year.

In total, Greek lenders shed appriximately €41 billion in NPLs last year, according to Debtwire ABS Europe. Of the deals contributing to that total, seven involved securitisations that took place through HAPS.

Outside of HAPS, deals in 2021 tended to be smaller, even as both Alpha Bank and Attica Bank completed €1.3 billion transactions.

Much of the hard work has now been completed for banks in Greece. By the end of 2021, the country's four largest lenders reported NPLs of approximately €16 billion on their balance sheets—significantly less than a year earlier.

The outlook also remains relatively benign, with little evidence of any post-pandemic surge in NPLs. Greek banks did take net provisions of €6.2 billion in 2021 just in case, but look set to avoid major setbacks. 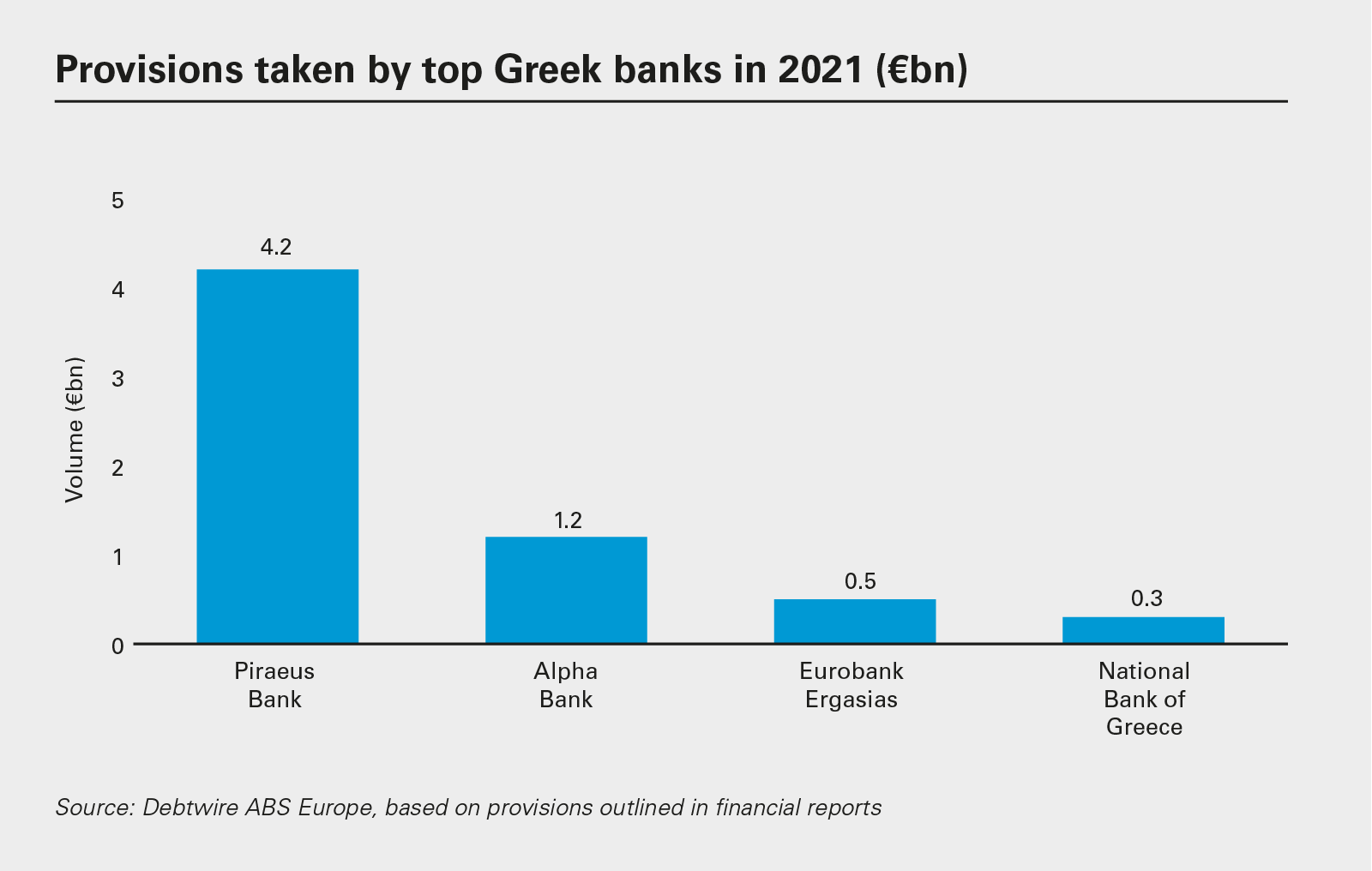 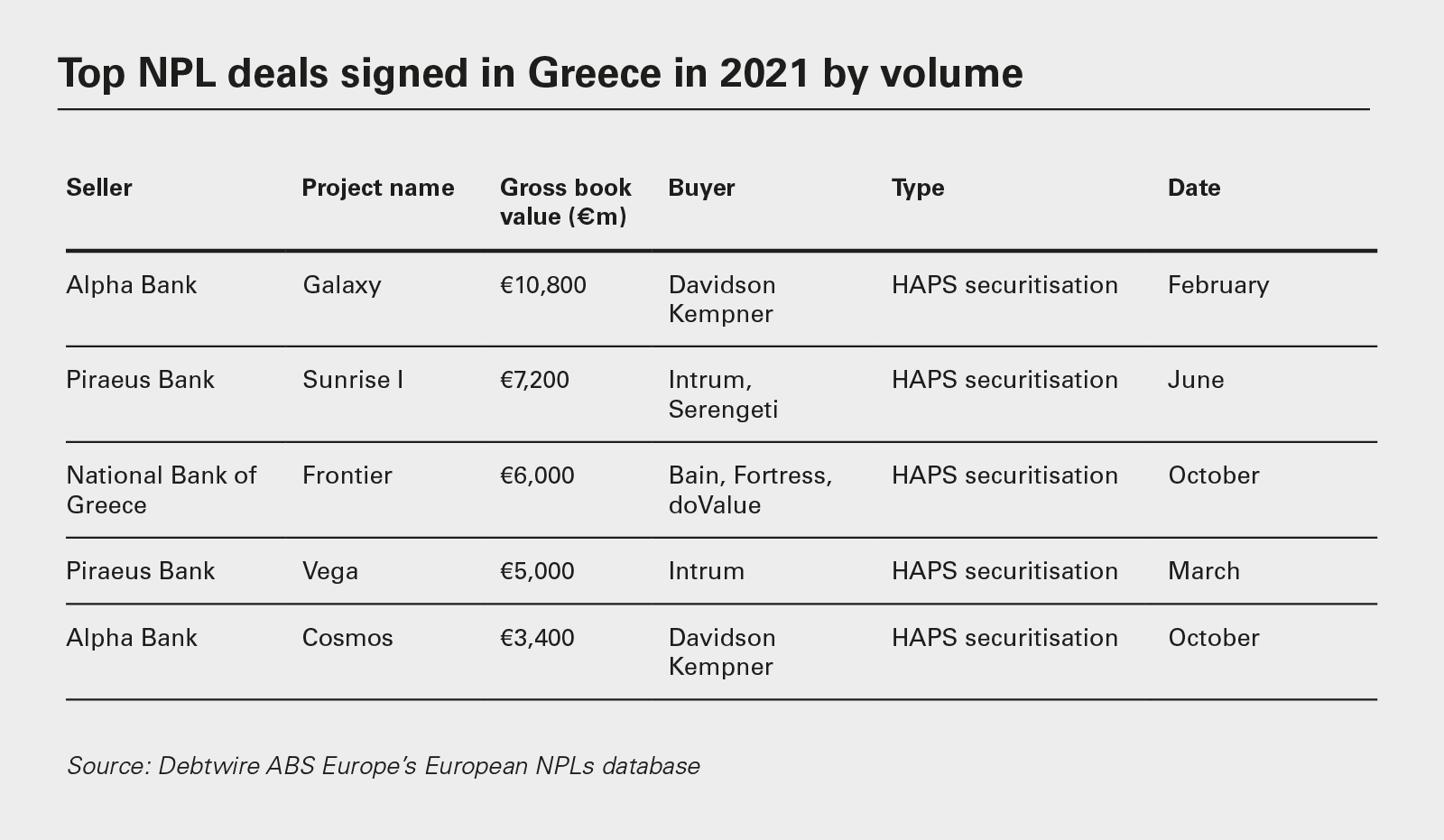 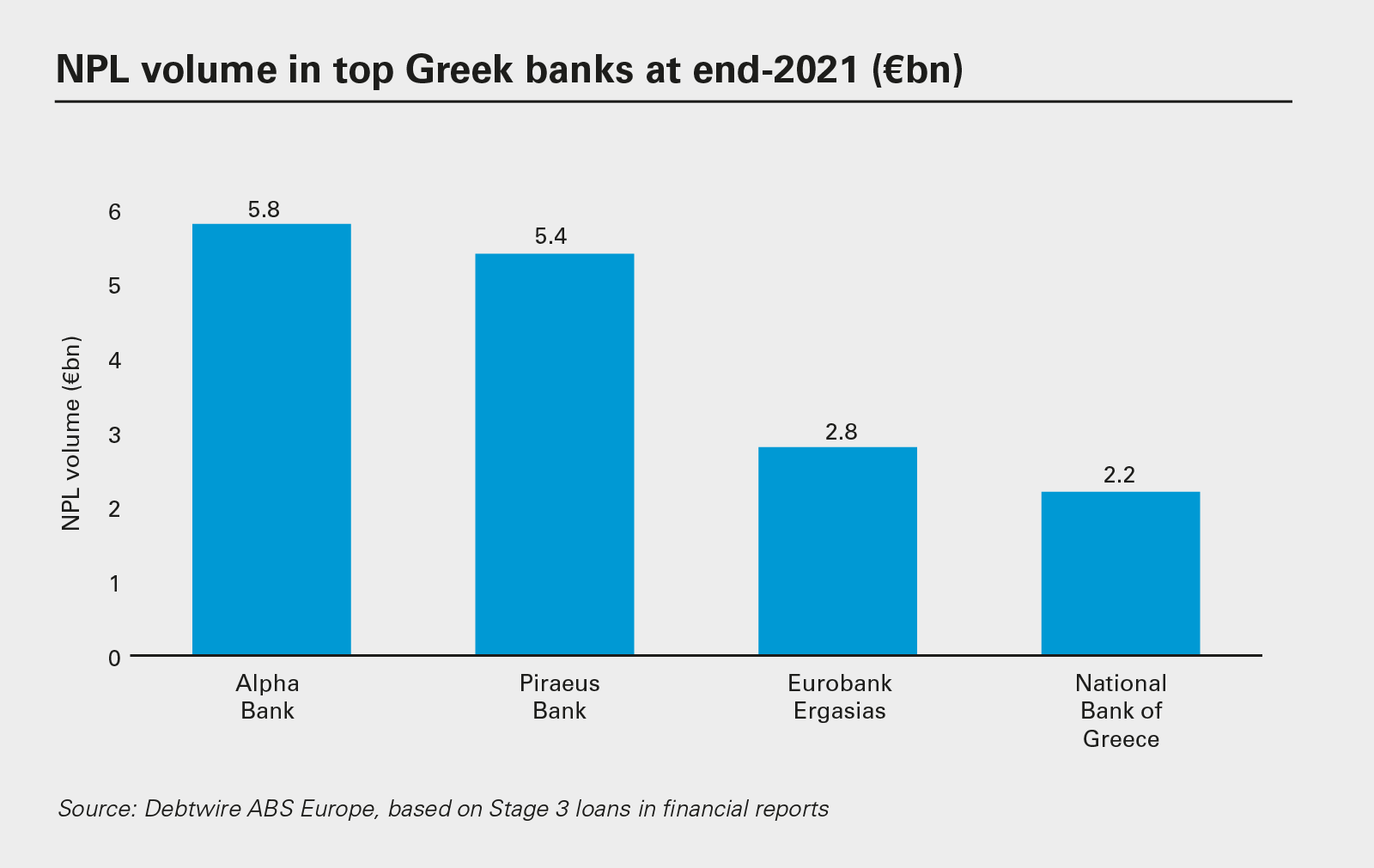 Italian banks have further reduced their stock of NPLs in the past 12 months, helped by a one-year extension of the state-backed Garanzia Cartolarizzazione Sofferenze (GACS). The scheme, which works in similar fashion to the Greek HAPS programme, had been due to end in June 2021, but the European Commission backed an extension until June 2022.

The extension of GACS allowed Italian banks to reduce their NPL load from 4 per cent to 3.1 per cent of their loan books over the course of the year. The sector offloaded NPLs worth a total of €19.5 billion in 2021, including sales of unlikely-to-pay (UTP) portfolios valued at approximately €600 million, according to Debtwire ABS Europe. Almost half that total was accounted for by disposals made under GACS.

Those included Intesa Sanpaolo and BPER's €3.1 billion NPL securitisation, as well as the €1.3 billion Iccrea Banca NPL securitisation of a real estate lease portfolio, which took the total number of deals completed through GACS in the past five years to more than 40—collectively worth close to €100 billion.

However, anxiety may be creeping into the market about the performance of Italian transactions. Underperforming deals such as 4Mori Sardegna, Leviticus SPV, Maggese, Belvedere SPV and Popolare Bari NPLs 2016 all reported decreases in collections ratios of low to mid-single digit percentage points, as did Monte Paschi di Siena's giant Siena NPL 2018.

In one bright spot, UBI's Sirio NPL has consistently outperformed its initial business plan, and extended that as of March 2022 with gross collections 110.43 per cent above business plan and a profitability ratio of 145.83 per cent.

Looking forward, activity levels in Italy are difficult to predict. Italy's government is reportedly lobbying the European Commission for a further extension of GACS, possibly for up to two years. And while Italy's banks disposed of €19.5 billion worth of NPLs in 2021, these institutions still have almost €42 billion in bad debt on their balance sheets and took net provisions of €5.5 billion in 2021. 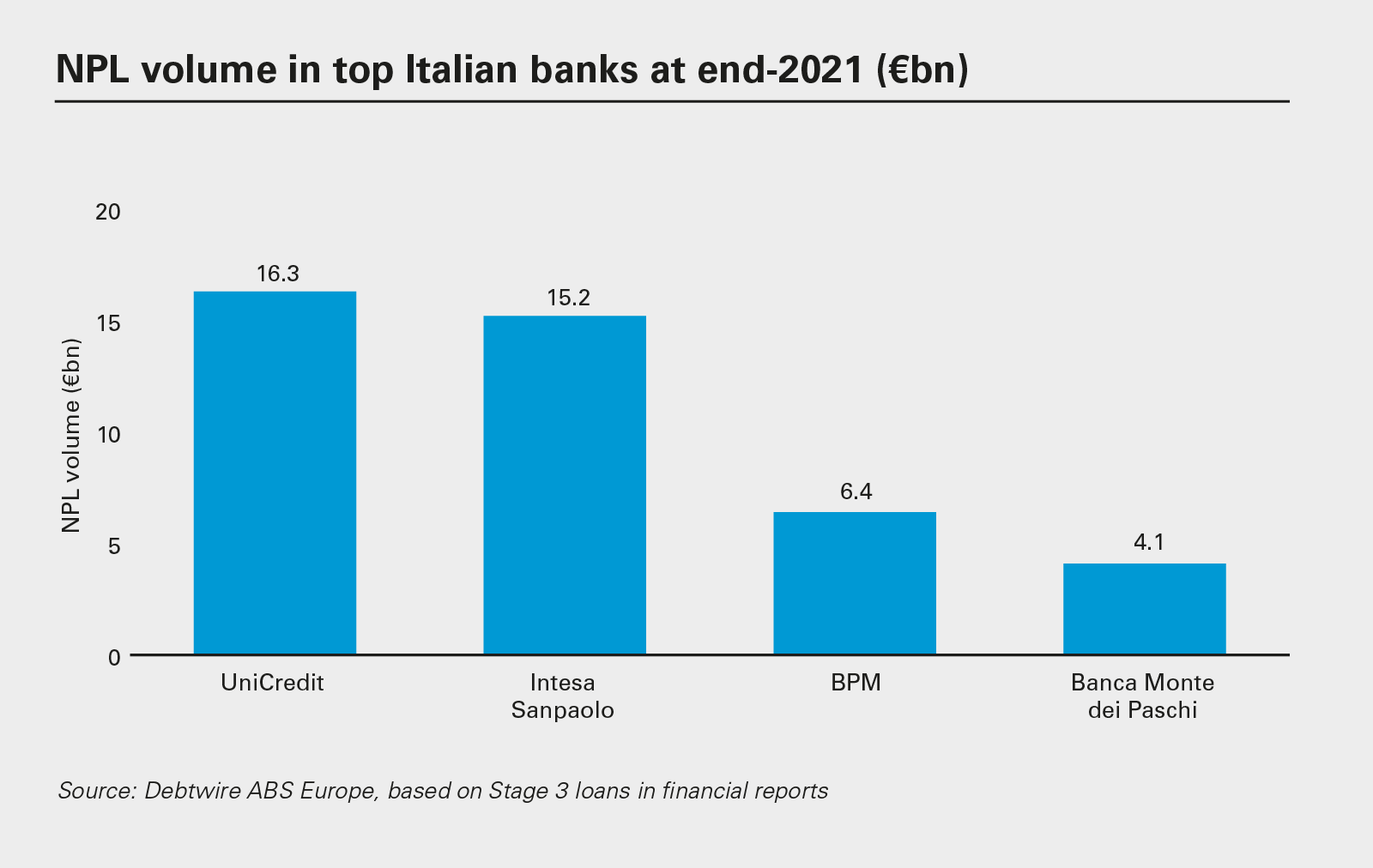 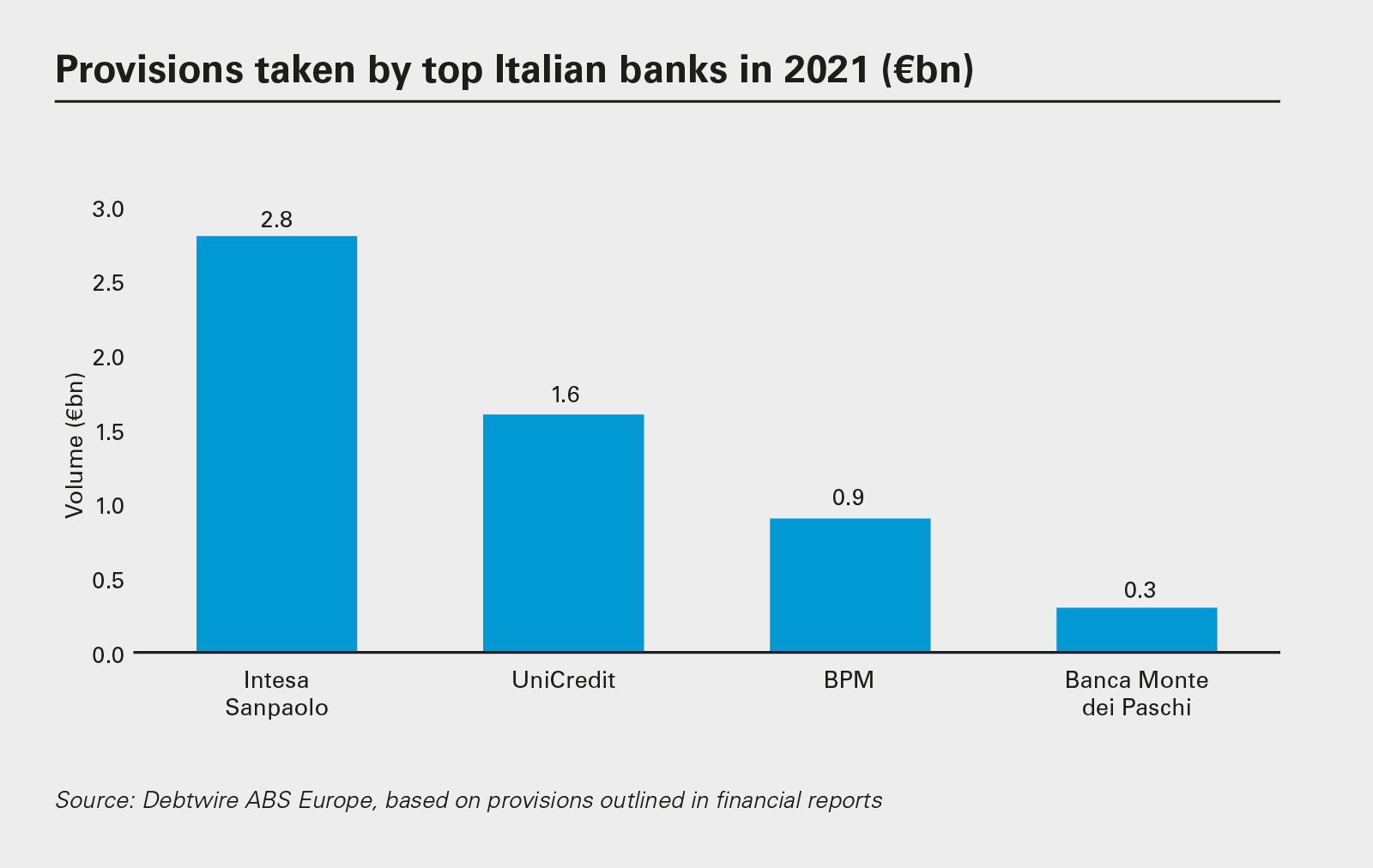 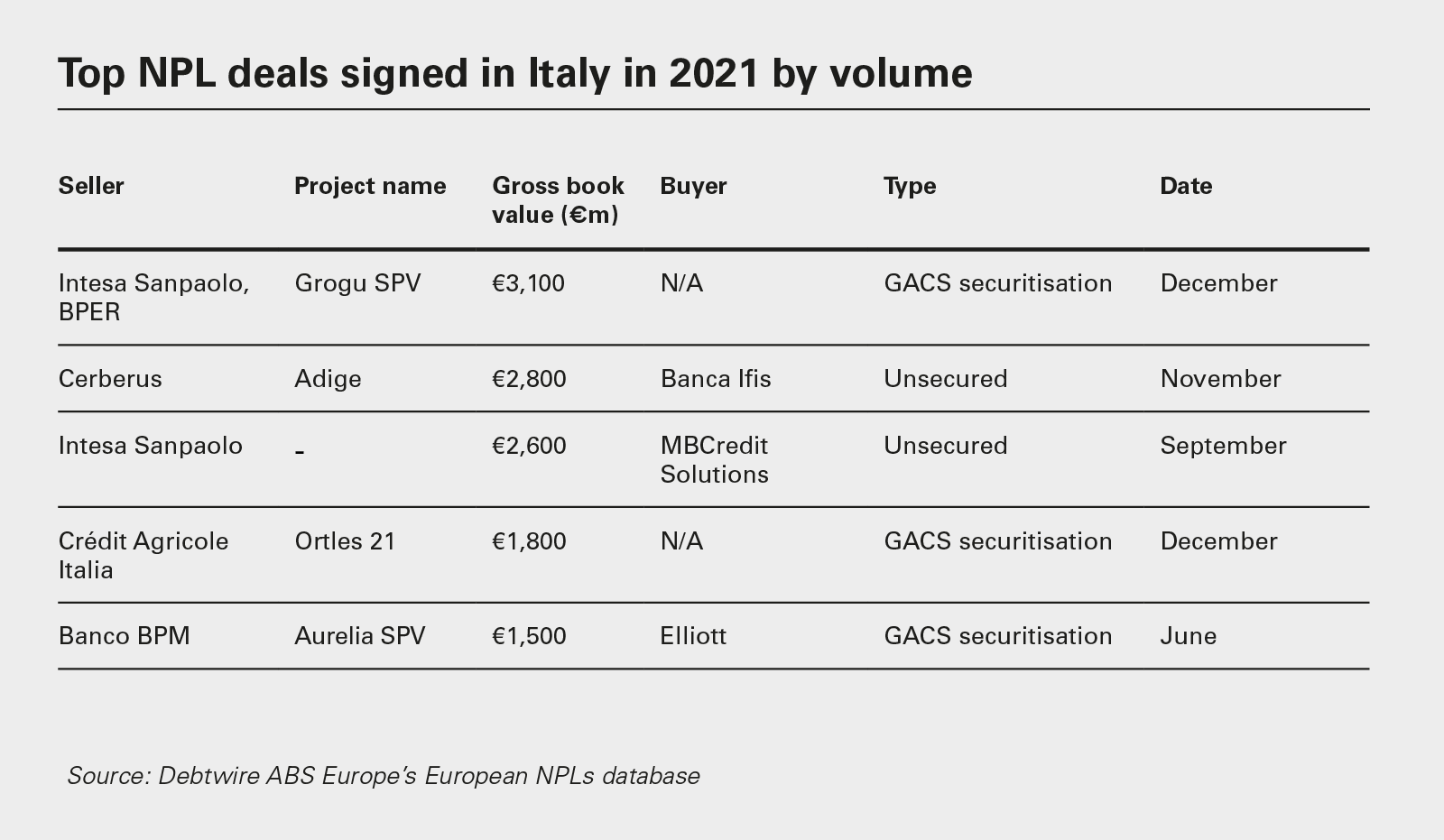 Most Spanish banks now have their NPL ratios under control and the flow of primary transactions has slowed, but secondary transactions by early-stage buyers are increasing, as are sales and securitisations of reperforming mortgage portfolios and giant servicing contracts are up for grabs.

The EBA reports that NPL ratios in the country's banking sector remained consistent in 2021, with 3 per cent of debt classified as non-performing by the end of the year, compared to 3.1 per cent 12 months earlier.

In the secondary market, Debtwire ABS Europe reports that some Spanish securitisations continue to disappoint, although last year did see a modest improvement for Prosil Acquisition (Salduero), whose collections increased a point to 50.5 per cent below business plan at the end of December. Retiro Mortgage Securities, however, deteriorated from 13.3 per cent below to 27.1 per cent below at the end of January.

Despite the progress made in recent years, Spain still has one of the largest stockpiles of NPLs in Europe. The country's four largest banks have €68.5 billion in bad debt on their balance sheets, despite disposals totalling €6.9 billion last year.

Moreover, provisions have risen sharply over the past 12 months, with the four largest banks earmarking a net €12.4 billion in 2021 for NPLs. Banco Santander took net provisions of €7.4 billion, while BBVA took €3 billion. That could swell the pipeline of deal activity in the months and years to come. 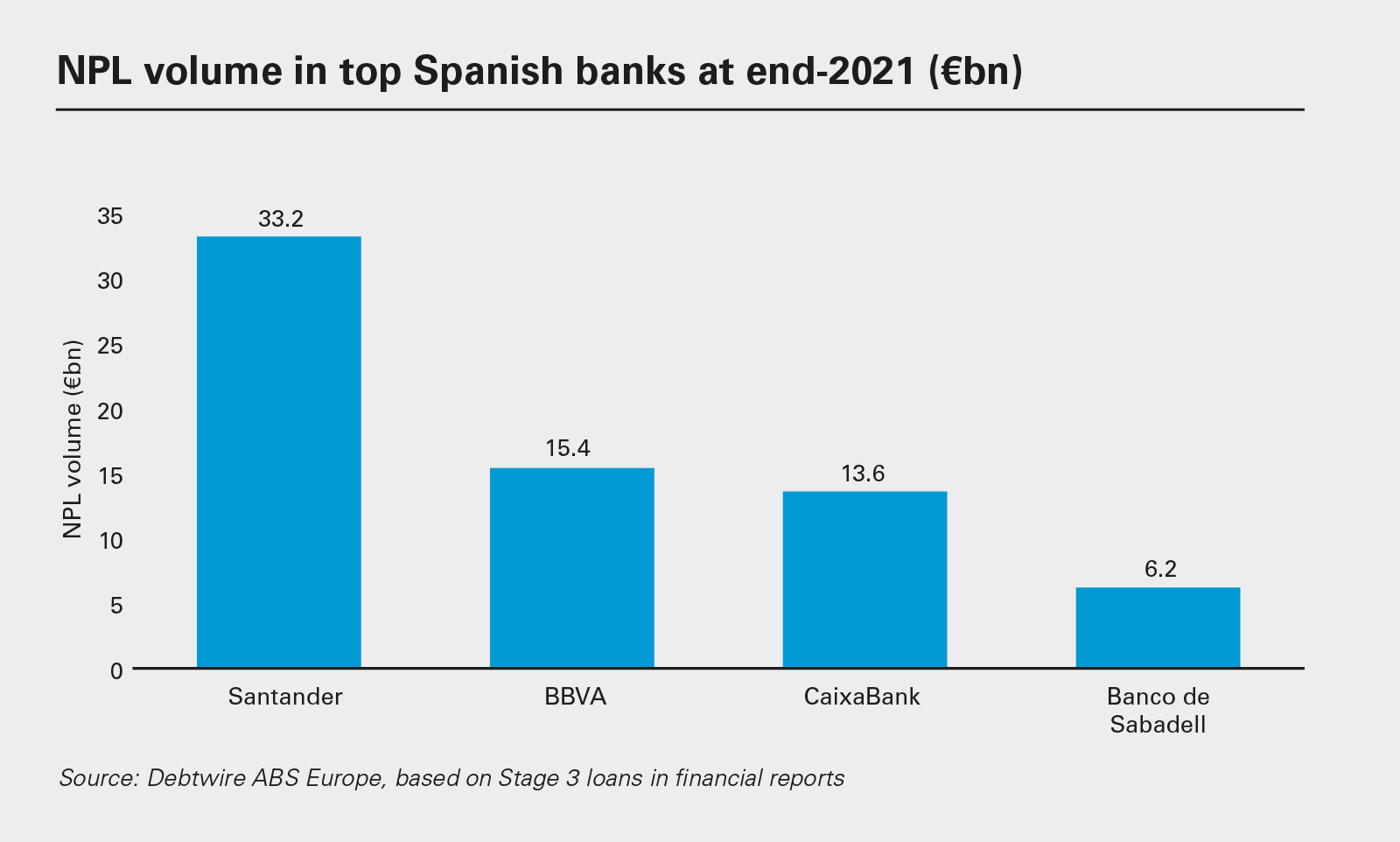 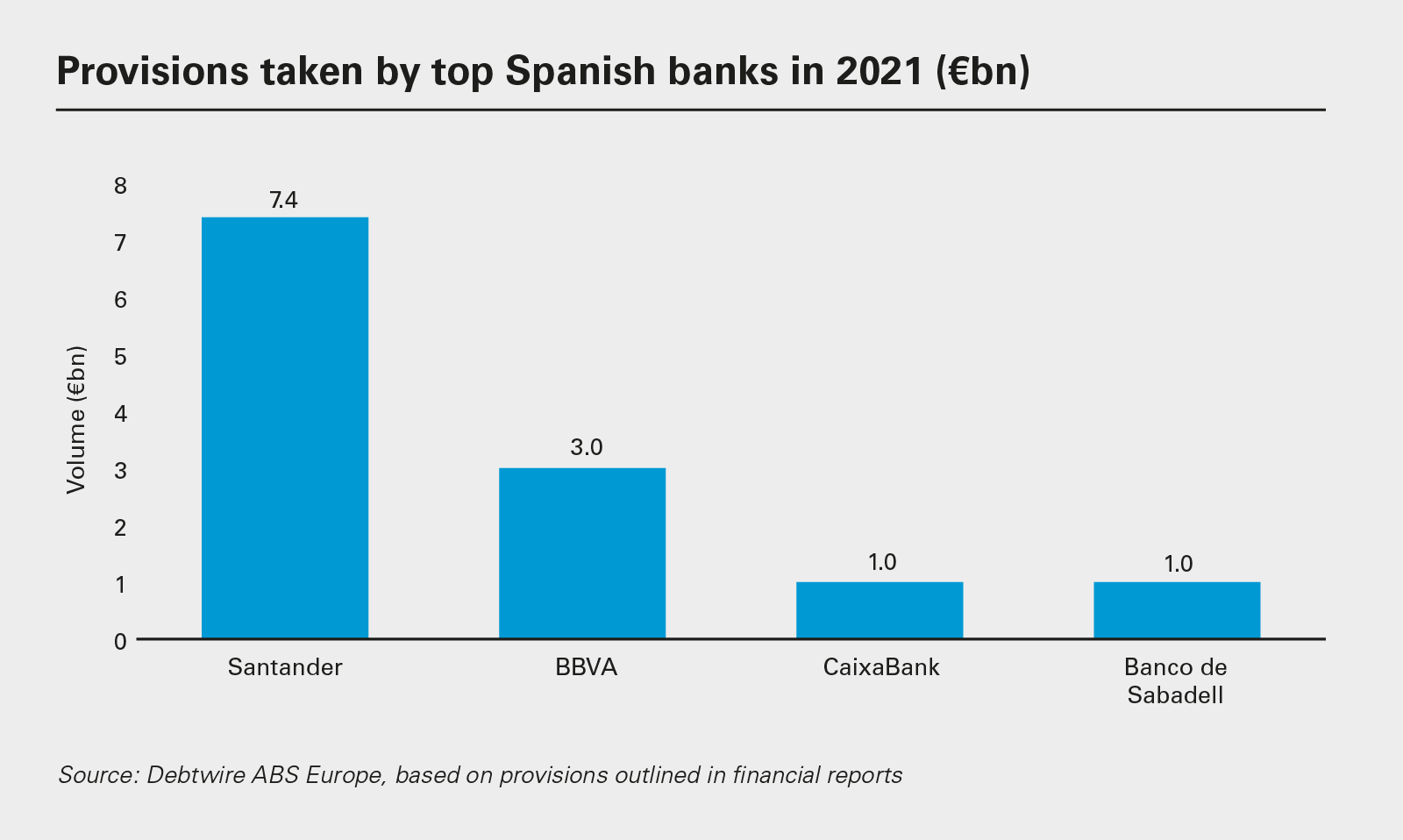 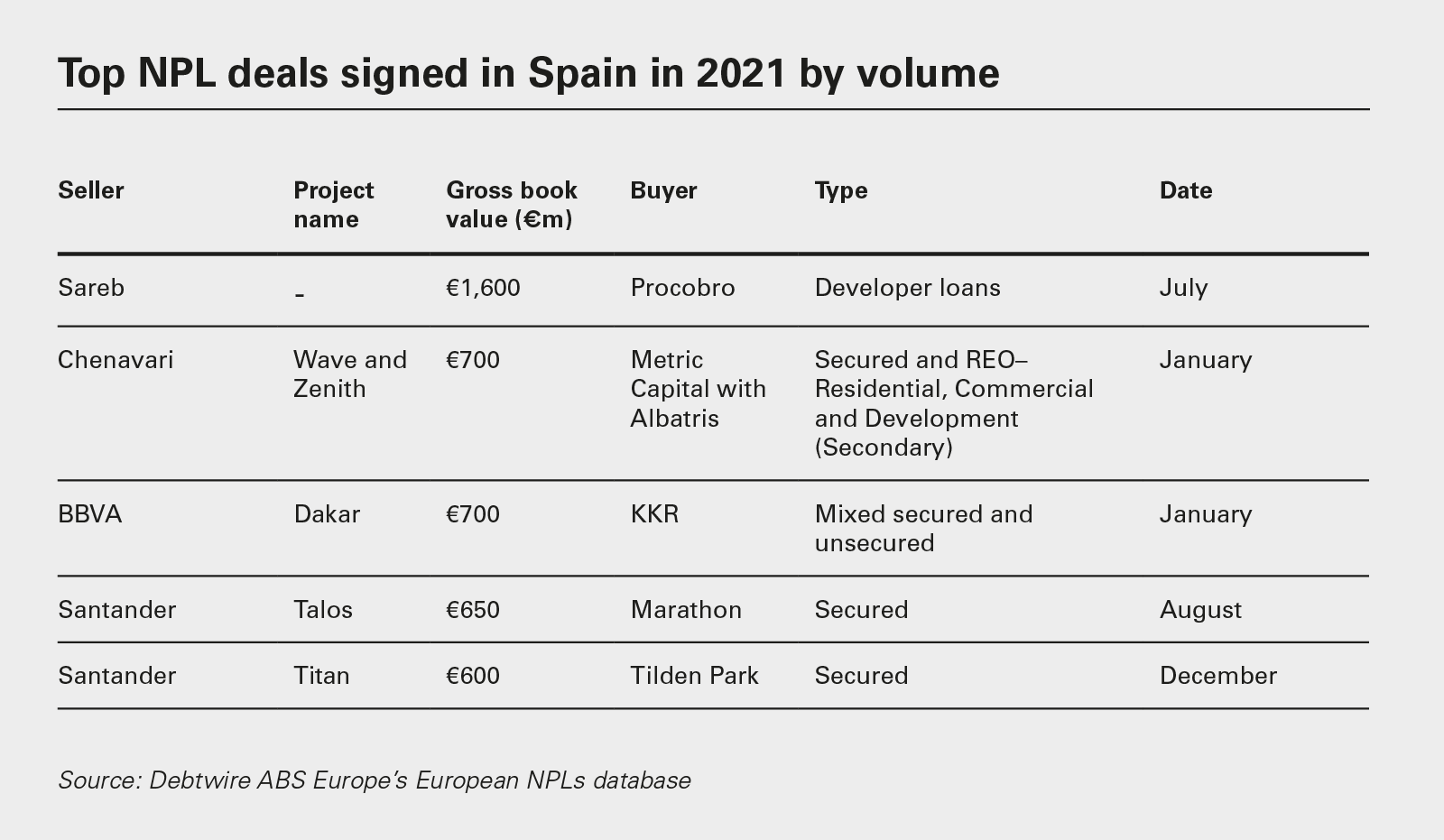 France, one of the European Union's largest economies, continues to report a benign NPL environment, with no sign of any imminent increase in impairments, and limited deal activity in the private market.

The French banking sector's NPL ratio was 1.9 per cent at the end of 2021, down from 2.1 per cent a year previously. Still, the country's four largest banks hold almost €80 billion in NPLs on their balance sheets, so more disposals can be expected in the years to come. That figure shrank by only €4.3 billion in 2021, and the four banks increased their provisions by a net €7.3 billion over the year.

France saw just a single NPL transaction in 2021, the €200 million disposal of small and medium-enterprise NPLs by Société Générale, picked up by iQera. 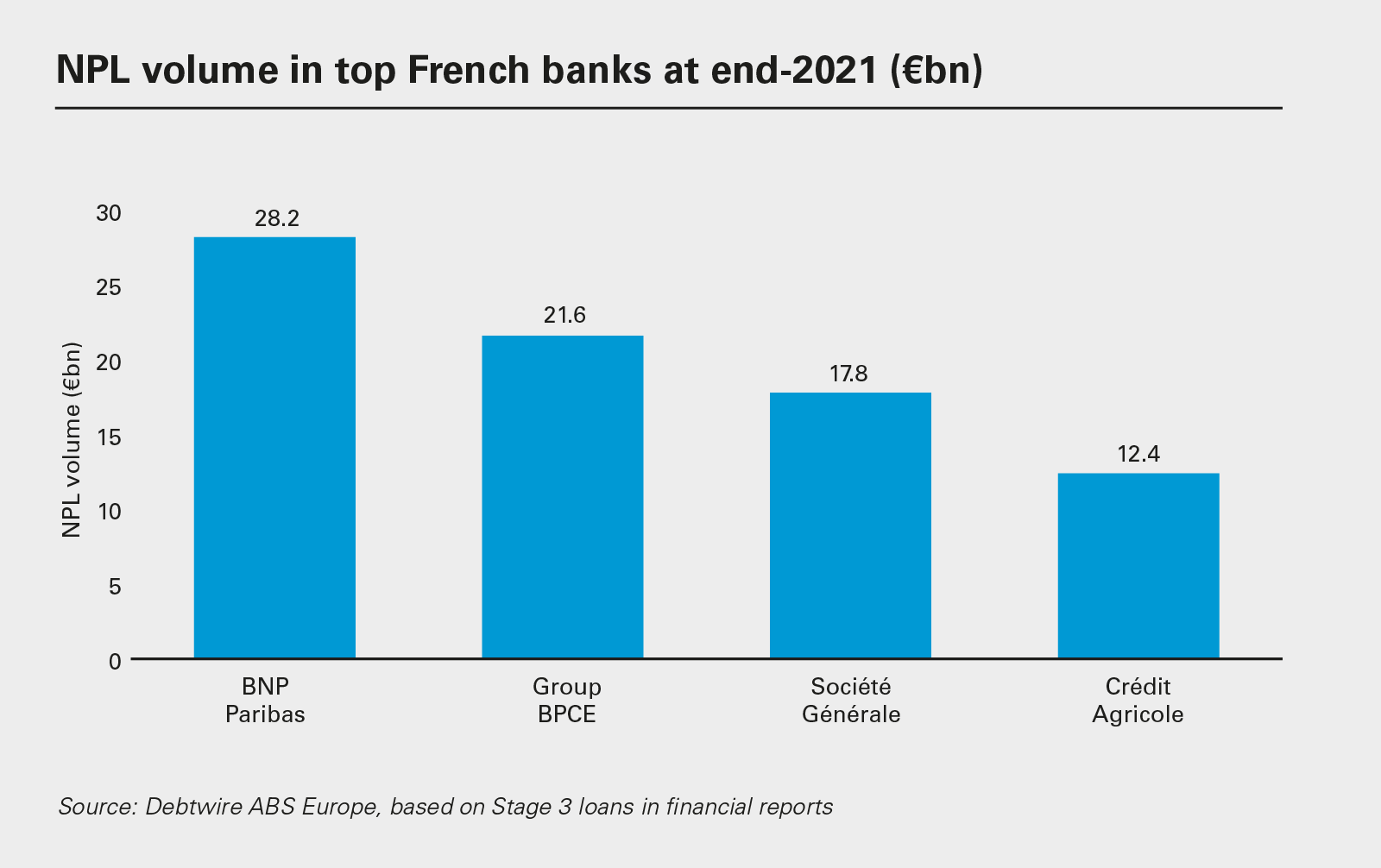 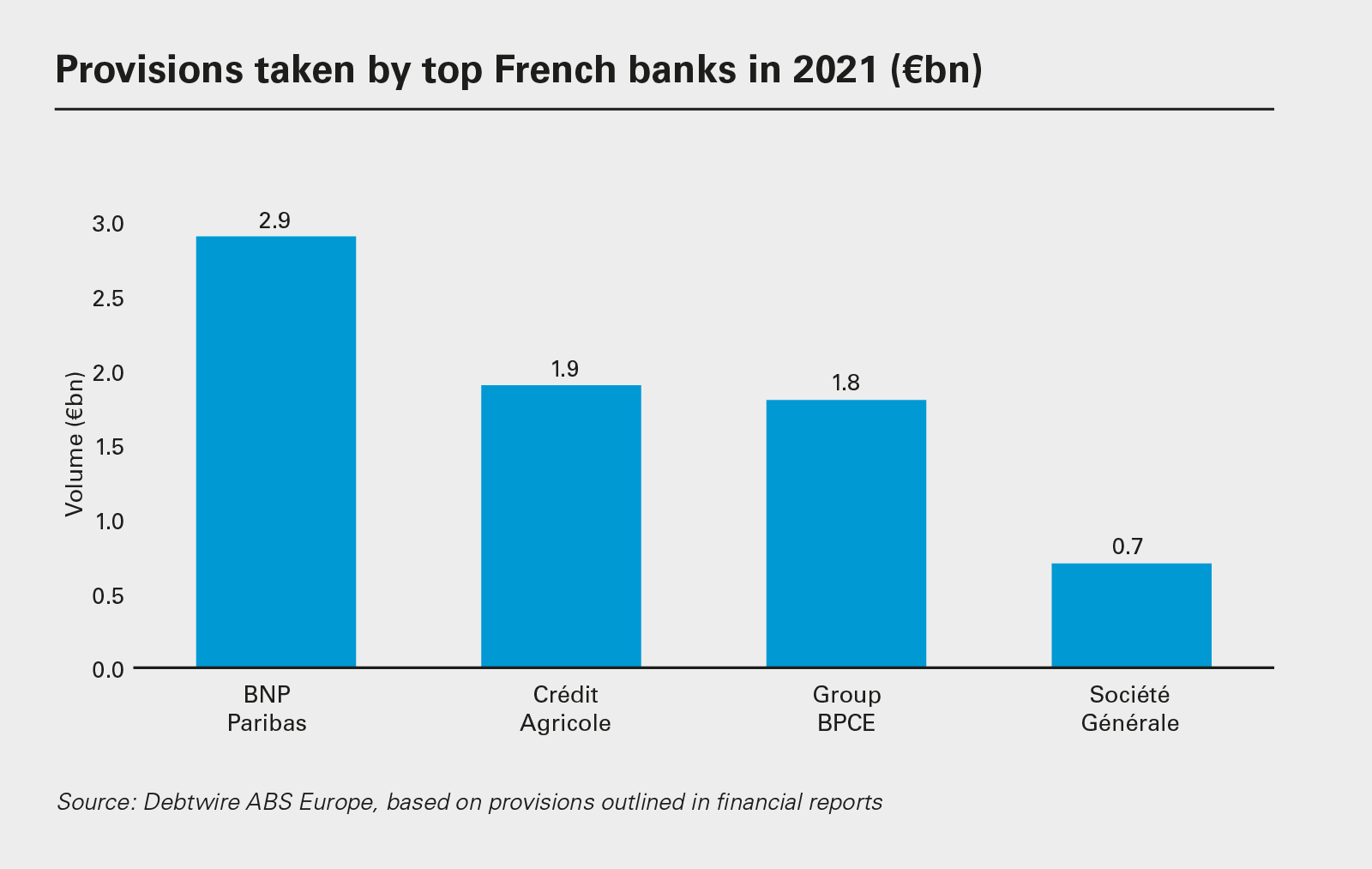 Deal flows look unlikely to pick up in the immediate future, with the UK's four biggest banks reducing their NPL provisions by more than €4.5 billion last year. As a result, their NPL ratios averaged only 1.7 per cent by the end of the year.

Ireland continues to see heightened levels of activity, with €20.7 billion in NPLs and non-core loans sold in 2021, though the focus has shifted to disposals of performing loans by overseas lenders exiting the jurisdiction, such as KBC and NatWest. Ireland's three largest banks still hold NPLs and non-core loans with a gross book value of €7.9 billion on their balance sheets, though this was reduced by almost €1.7 billion last year. The sector's NPL ratio also decreased from 3.7 per cent to 2.8 per cent in 2021.

The German banking sector, meanwhile, continues to boast one of the lowest NPL ratios in Europe, with the EBA reporting a figure of 1.1 per cent at the end of 2021, slightly down on the 1.2 per cent at the start of the year. The country's two largest banks were carrying €14.7 billion in NPLs on their balance sheets at the end of the year, down €329 million year-on-year. Provisions increased by a net €395 million over 2021, but German banks announced zero sales of NPL portfolios last year.

One other country worth mentioning is Cyprus, where the Bank of Cyprus announced the Helix 3 sale of €698 million in NPLs to Pimco in November 2021. The disposal of this portfolio of 20,000 loans enabled the bank to bring its NPL ratio down to 8.6 per cent, taking the figure into single figures a year earlier than it had previously expected.

Indeed, while the banking sector in Cyprus is small in the context of Europe as a whole, it does have a significant NPL issue. Its NPL ratio has come down in the past year, but still stands at 4.1 per cent, one of the highest on the continent.

The country is also more exposed than most to Russia. RCB Bank, for example, has faced scrutiny from regulators given its links to Russian bank VTB, which owned a substantial stake in RCB until earlier this year. It recently sold a €556 million portfolio of NPLs to Hellenic Bank.

Moreover, Cypriot loan books loom large for banks in other jurisdictions. In February 2022, Greece's Alpha Bank announced the sale of a portfolio of Cypriot loans and real estate properties to Cerberus—the Project Sky portfolio was valued at €2.4 billion. 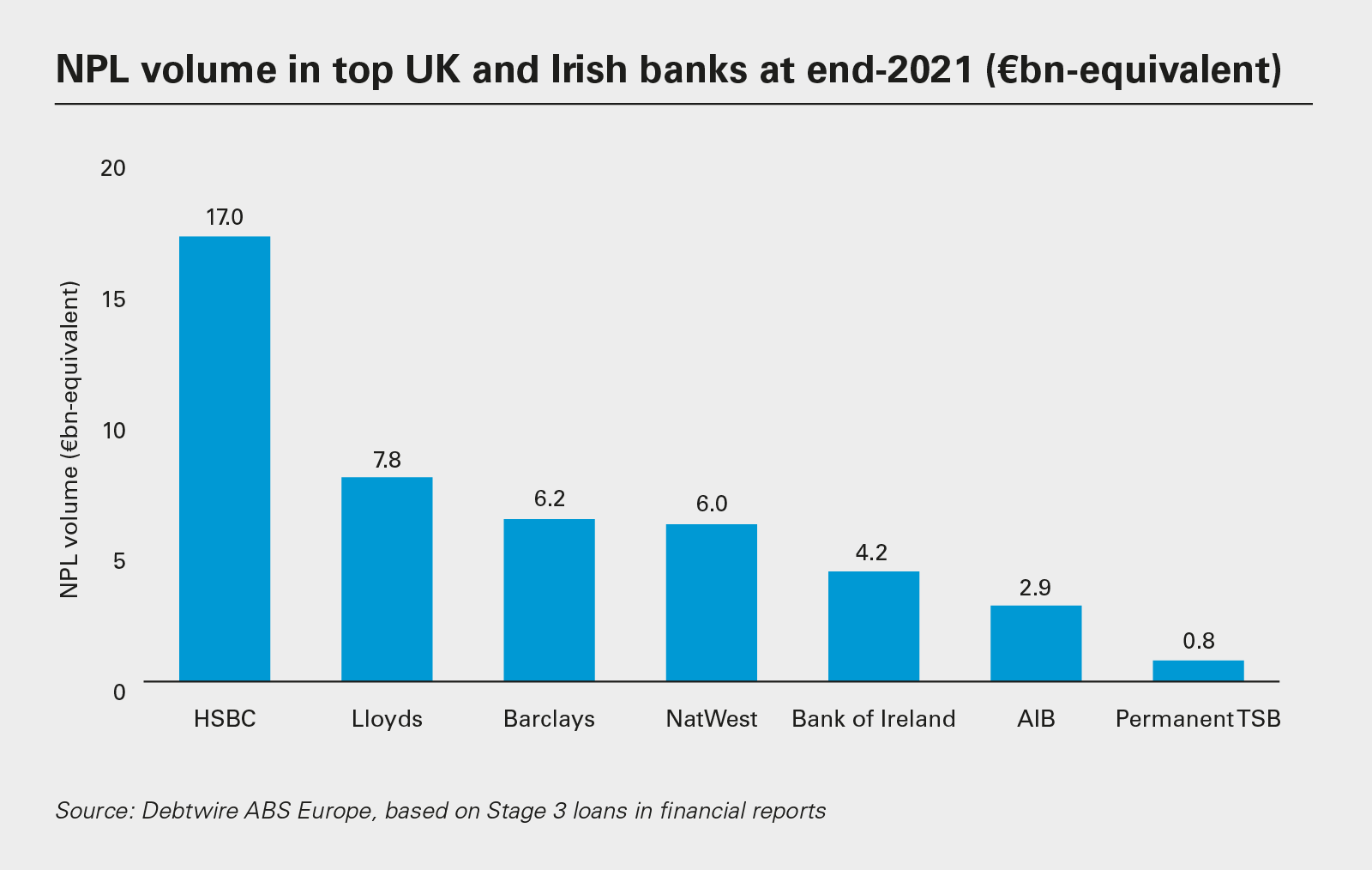 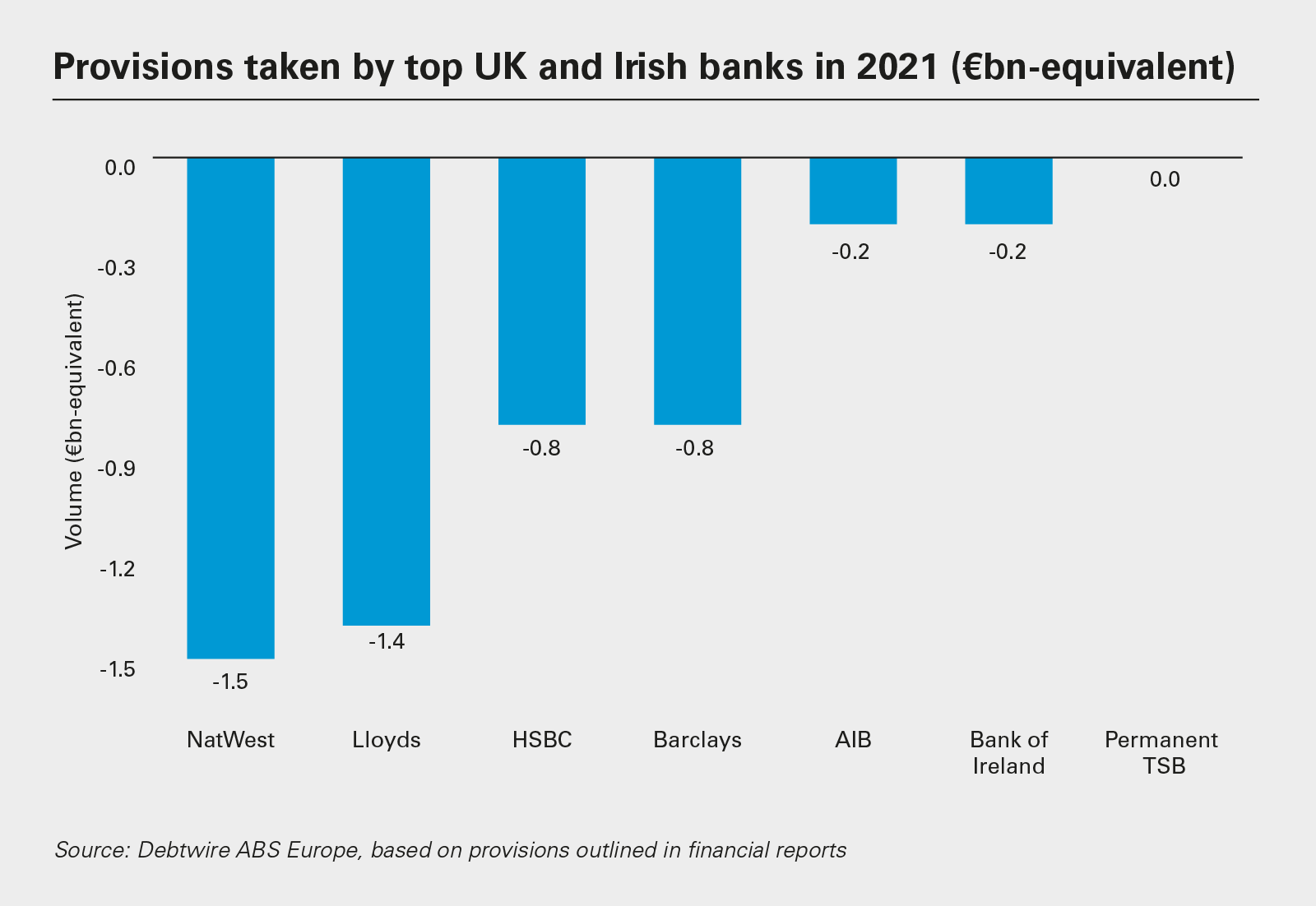 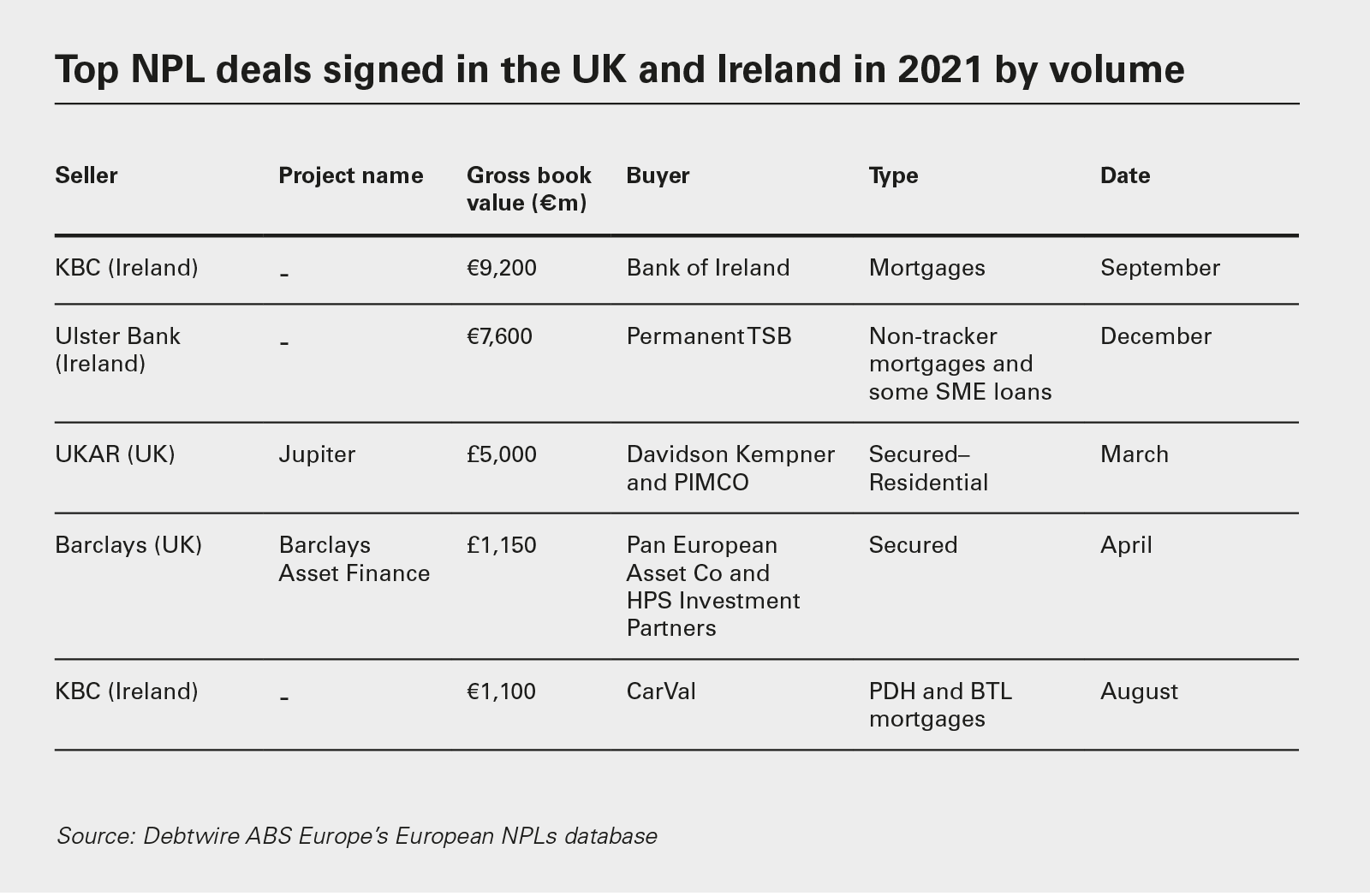